When I took off to break Lee Behel’s three-kilometer closed-course record of 378 mph that was set in April of 2014 at the Mojave Experimental Fly-In, it was the most difficult of the four records we had planned to attempt that week. Luckily, it was also the last. Since it was the final record, and the one we wanted most, I had been cleared to set the power required to meet our goal of 385 mph and ignore all engine instrumentation. During my 18 months flying for Andy Chiavetta, I had spent the bulk of my time developing and strictly holding myself to a series of limits that had been debated and eventually agreed upon by the group. First were the Continental limits, which were viewed as suggestions. Then there were the “peacetime” limits—we used these for the domesticated Super Legacies and the baseline testing that we did early on in programs. During the week of the Mojave Experimental Fly-In, we set out to break records, so the limits had been moved up to the “wartime” limits based on Reno race maximums. But with all the goals met and one flight to go, the team had decided to set the power (the highest power I had ever run) and ignore all limits. “Nuke it,” Andy said, as we got ready to start the engine. 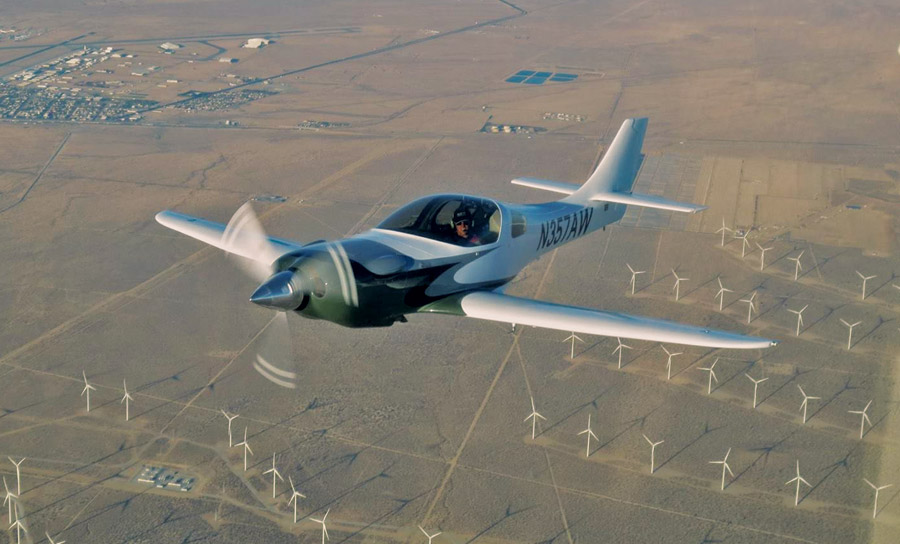 Limits are the heart of flight test, the most technical and uncompromising portion of the contract between a test pilot, a flight-test engineer, and a crew chief. A well-written test card describes, using limits, the bounds to the problem, within which the pilot works to carry out the objective. If used properly, limits allow the intricate relationships between all the systems of the airplane to be quantified with an easily referenced value. Sometimes in the heat of battle, a test pilot may find himself in an artificial corner built by poorly conceived limits, and sometimes a pilot may get busy and miss a runaway needle before it blows through the associated limit. But when done properly, a limit allows the bulk of the decision-making work to be done on the ground on a comfortable timetable, maximizing the chances for success. As Wasabi Air Racing test pilot Justin Gillen says, “Set the limit, honor the limit.”

It is not uncommon in Mojave for the winds to be blowing at 10 knots two hours before sunrise, but then get calm for the half hour to hour right after sunrise. Like most things, if you depend on it you get bit. During the buildup to the first flight for the Aerochia economy Super Legacy N357AW, The Green Dragon, this got to be a real problem. Typically for a first flight you set particularly conservative cross and total wind limits, and while Mojave is the best place on the planet to test airplanes, it is not uncommon for winds to be over 40 knots. So if you have been pushing hard to get a first flight off, you are using conservative wind limits (typically 10 knots total), and since you are flying out of Mojave you can find yourself in a bit of a bind. 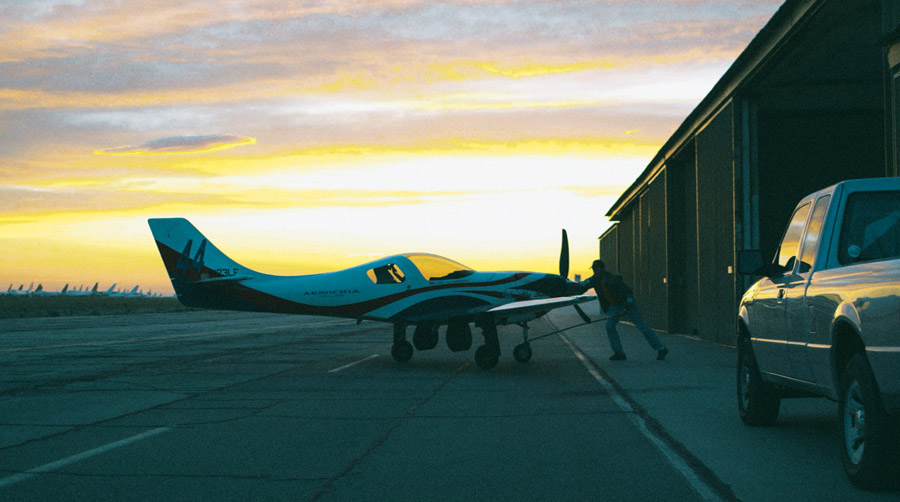 Elliot pushes out Lynn Farnsworth’s Aerochia Super Legacy for a test sortie during the buildup to the record attempts at the 2015 Mojave Experimental Fly-In.

At 4 a.m. my alarm went off, and I opened the blinds over my bed to look at the tops of the trees across the street. The light from the street lamp wasn’t spectacular, but it looked like they were remaining relatively still, good news, so I called the Mojave AWOS. The winds were calling 7 knots gusting to 12 knots. On mornings like this before a flight at Scaled Composites, we have a flight test hotline set up. Someone (typically the flight-test engineer) can call the phone number and leave a message that plays on a loop, so when you wake up at the ridiculous hour required to make the 4 a.m. brief (or the 2 o’clock maintenance show), the first thing you do is call the hotline. If the weather has turned or the night team found an issue with the airplane, the hotline tells you that and you go back to bed. On these little Wasabi programs, we don’t have a hotline; typically we use a group text. So I texted Justin Gillen: 7g12 what do you think? Because Justin lives much farther from the airport, he was already up and had checked the weather, so his response was quick, “Yeah out of limits—call your flight.” I responded that the winds would likely calm down, so I thought we should press on, what did he think…blah, blah, blah. As his responses got shorter and shorter, I could tell he was getting annoyed.

The problem was that Justin saw our published flight limit of 10 knots total as exceeded when we checked the weather two hours before the flight and the winds were gusting to 12; therefore my pondering was only cutting into his sleep. I saw the limit as a flight limit, so based on the weather at 4 o’clock, we would guess what the weather would be at 6 o’clock. Out of all this came a new second wind limit, a “wake up wind limit.” If the purpose of an operating limitation is to front-load the decision making—effectively making the decision on the ground—then pondering a weather forecast at 4 a.m. while still half asleep didn’t make a whole lot of sense. So by setting a specific limit, we saved ourselves all that figuring. 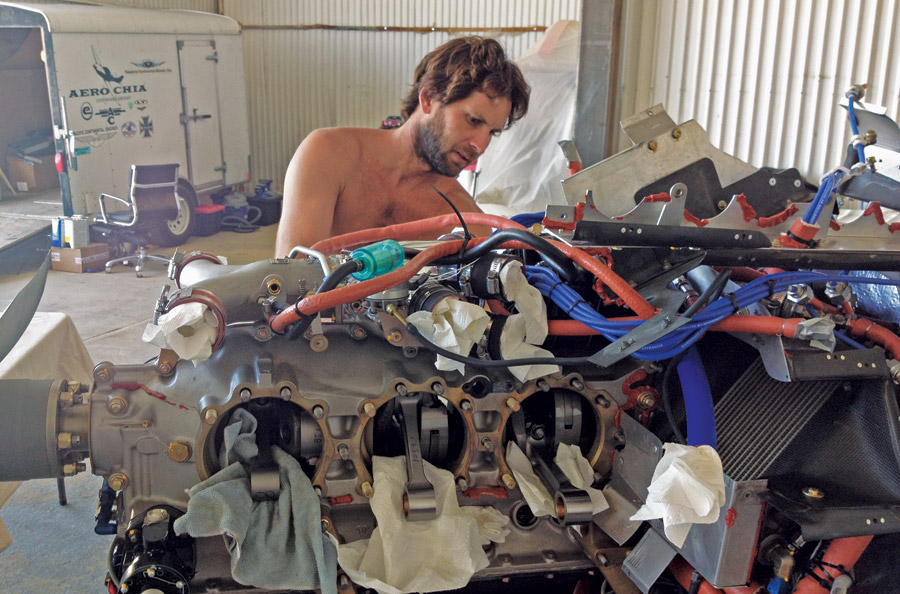 Aerochia frontman and crew chief Andy Chiavetta during field engine rebuild of the highly modified TSIO-550 on Lynn Farnsworth’s Race 44. This was during the build-up to the record runs at the 2015 Mojave Experimental Fly-In.

The Green Dragon was the first Legacy that Andy had asked us to do the entire phase one test program for, and by design the bulk of the testing would be done at Mojave, away from the owner, and away from Andy. As a result, I was very worried about damaging the airplane and finding out, “The CHT limit is 375 not 400—no wonder you destroyed my engine.” So I spent a lot of time talking to Andy, the owner, the engine builder, and the folks at Lancair about what the limits for the airplane were and where they came from. As I got more time in the airplane, we moved to higher power testing, which meant more challenges for operating the airplane as an extension of the will of this group of people, a responsibility that I believe is most fundamental to being a test pilot. This is why it was such a strange sensation when I taxied out for the three kilometer with all those limits temporarily suspended.

After a casual 300-horsepower takeoff, I pointed the airplane south and started to add power. At 550 horsepower and 2700 rpm, I confirmed the fuel selector was set to the tank filled with race gas, turned the cylinder spray bars on, and confirmed we had water pressure. I then turned on the methanol anti-detonation injection (ADI), confirmed ADI pressure, and rolled the prop to the forward stop. By this time I needed to turn back toward the course. As I pulled the nose back to start down the chute, I started to roll in the boost pressure, trimming with the mixture control as I stepped through the horsepower. Before this week I had never been over 650 horsepower; now I slid past it like it was nothing. I set the power required and could see very quickly that the engine was not happy. The temps started to rise. I was already headed downhill towards the course and I could see the start gate. I ran through my checklist one more time: Water on, pressure good, ADI on, pressure good, boost is set to the appropriate number, prop is set, mixture is trimmed; everything was where it was supposed to be. 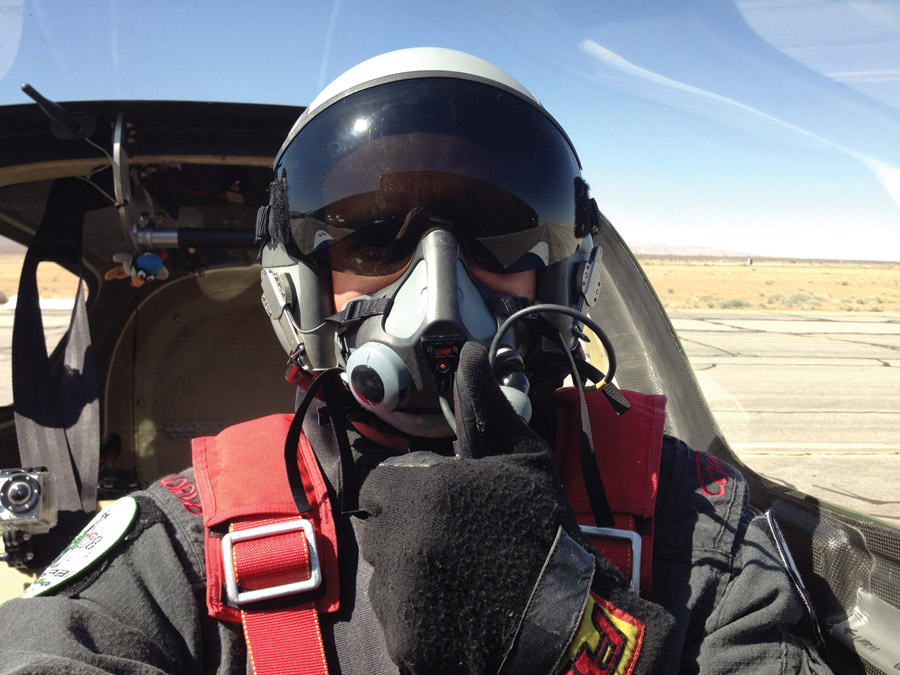 Elliot snaps a selfie in the cockpit of Race 44 after a record attempt at the 2015 Mojave Experimental Fly-In.

With the start gate fast approaching, the temperatures were getting high enough that the engine was starting to complain. The John Jackson and Chris Padilla (Pacific Continental) prepared TSIO-550 will buck at you when it doesn’t like what you are doing to it. I had experienced this at 400 horsepower, but never at these power settings or going this fast. I was confident the engine would not survive the first of the four passes required to take Lee’s record, but I had made a deal with the team and I was committed to that agreement.

As I passed through the traps after my first pass, I had time to look at the engine gauges again. The temps were so high I got lost on the EFIS and couldn’t tell what I was looking at. As I started the second pass, the bucking frequency had increased and I found myself more focused on the engine than anything else. I was sure it was about to let go and when it did, I didn’t want to waste any time getting the airplane pointed back toward the runway. This was without a doubt the most intense moment of my flying career; things were getting worse faster and with more at stake than I had ever experienced. I was just waiting for an excuse to abort, to surrender to Lee Behel—the best racer I have ever known—and the engine just…got better. Halfway through my second pass, the pressures came up just a little, the temperatures came down just a little, and the horrendous bucking slowed. In that moment of ferocious intensity, with Andy, the film crew, and my fianc watching, I thought of Lee, just for a moment and then I went back to the business at hand. 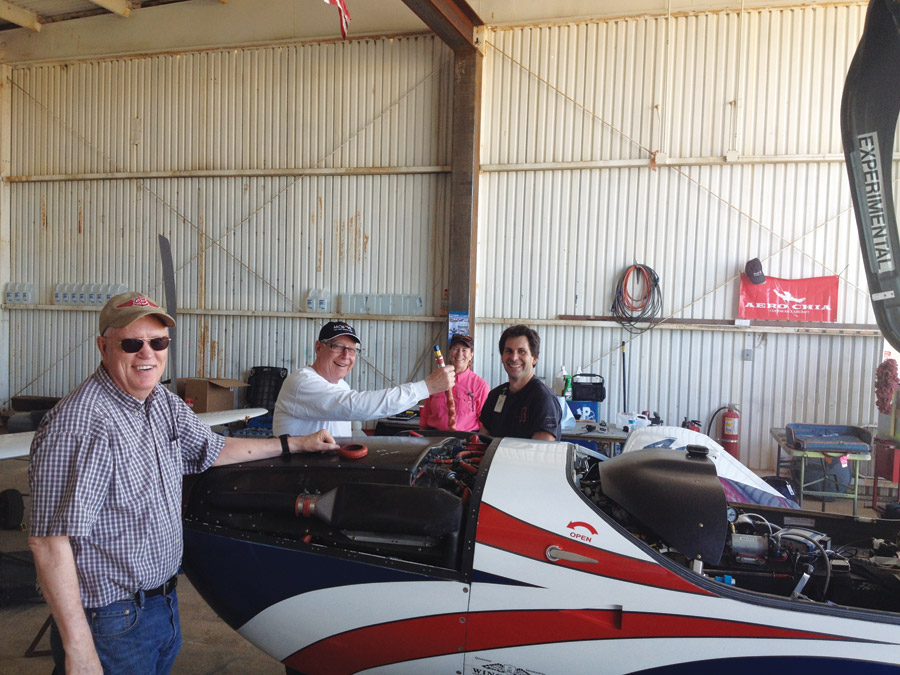 Lynn Farnsworth, Brian Utley, Ardy Williams, and Andy Chiavetta drain the fuel from Race 44 to begin fueling it for the record attempts.

The engine held together for the two remaining passes, and the final speed came in at 387 mph. I taxied back and told Andy and Lynn what terrible things I had done to the airplane, but they didn’t seem to mind. I was glad that they had meant it when they said, “Nuke it,” or maybe (because it hadn’t broke) we didn’t have to have the hard conversation about what “Nuke it” really meant. Either way it was freaking awesome. This is good work that we do—cold and unforgiving—but good.