The best tool for certain tasks may require a bit of ingenuity and home shop fabrication.

The purpose of this treatise is twofold. First it’s to describe a specific and known issue and its clever solution and, second, to illustrate and encourage creative thought and modification of tools and/or implements to solve vexing problems.

Around the late aughts, early teens, there were several posts on forums oriented toward Van’s Aircraft builders about insidious leaks in RV-10 fuel tanks, primarily, but not exclusively, from quickbuild tanks. A friend of mine, Mike Andresen, was ahead of me at reaching the point of first fuel fill and that turned out to be a blessing for me, as I will later explain.

What some folks, including Mike, were discovering was that fuel leaking out of the underwing fuel vent as would be common and expected on topped off tanks sitting in the sun. As we all learned in primary training, liquid fuel volume increases with temperature. When tanks are completely topped off with cool, refreshing fuel from the truck or fuel farm, and then the fuel tank warms up under the sun or in a hot hangar, the fuel expands. The science is such that the process could actually rupture the tanks if the vents weren’t engineered to release the pressure as well as to allow air to enter the tank as fuel is consumed. Fortunately, in the case of normal thermal warming, it usually doesn’t take the loss of much fuel in order to create enough of a volume buffer in the tank for the ambient temperature expansion and contraction cycles and the “leaking” stops before, hopefully, not much Oshkosh grass gets killed.

However, what the afflicted builders were experiencing was that the fuel dripping out of the vents wasn’t stopping until several gallons had been lost and they had large, potentially dangerous, azure murals on their workshop/hangar floors. Eventually, however, the leaking did stop, even with significant fuel remaining in the tanks which was even more confusing to some. Some folks let the rabbit lead them down a “it’s just normal thermal venting” hole.

My friend Mike, being a big brained engineer employed by the defense industry, started to drill down deep into the problem and soon reasoned that the evidence seemed to indicate that the fuel escaping the vents had to be entering the vent plumbing, not at the normal entry, but lower in the plumbing. The most likely culprit being the AN nut joining the inner vent tube to the AN fitting passing through the innermost rib/wall of the tank. Since that connection was lower in the tank structure, it would explain the higher volume of fuel expelled before the loss stopped. In this case the fuel loss would truly be a “leak” rather than a normal venting by design.

Great theory, but holy crap: How does someone prove, let alone repair, a loose nut on the inside of a riveted enclosure, especially a structure that has been sealed by a generous slathering of the devil’s own snot? (Apologies to the Pro-Seal company, but they know what they’ve done.) The immediately apparent corrective options were ugly and uglier. One option was to drill out dozens of rivets to open up things enough to reach in and tighten the nut from behind. As daunting as opening up the sealed tank was, riveting it back together and resealing it again was an even deeper nightmare just shouting out the glaring possibilities of introducing new leaks where previously there had been none.

One primary goal of aviation repair and maintenance is just like medicine— to do no harm. That often led folks to the second option which was the “CC” solution. To wit: Take a crowbar to the wallet and extract a credit card to buy a new tank kit(s). A new tank kit was certainly a cleaner option, and a sure solution to the problem if constructed and sealed properly. However the new solution would be expensive and time consuming, especially for those needing to fix both tanks and/or the wing and tank had been already painted. There was a rumor that one builder went with the new tank option and to assuage his angst over the whole mess, then took the partially fuel filled original tank out to his favorite isolated desert shooting spot with a six pack and a six shooter.

Undesirous of the first two options, Mike pondered the problem deeper. There were only two openings of any size in the tank structure, one being the filler hole on the opposite end of the tank, and the other, the opening for the fuel quantity sender apparatus. Neither hole was large enough for a builder’s hand to fit through, but at least the sender hole was fairly close to the vent location and on the same surface. Ever the engineer, Mike fabricated a dimensionally correct test model of the requisite section of the tank rib/sidewall which allowed him to envision and test a solution. Using precision calculation mixed with MacGyver ingenuity and a dose of hillbilly TLAR (That Looks About Right), Mike crafted a clever tool from nine separate parts which combines into a single adjustable component with a joggle in the handle that cleverly leverages the wrench rotational purchase of a roughly 4-inch hole out of an actual 13/8-inch hole. That results in a roughly quarter turn of the offending nut with each application thereby solving a majority of the reported cases of “looseness” with a single application. Nevertheless, without even extracting the tool from the access hole, the wrench can be backed off the nut, the handle flipped back around, and the wrench slid back onto the nut for another quarter turn as many times as necessary to secure the nut and stop the insidious leak. Torque of course, is measured by the elbow scale, but I’m sure Mike could MacGyver a solution for that too if absolutely necessary. His tool works well even with the tank attached to the wing and the wing attached to the fuselage. Only the wing root fairings must be removed.

After Mike had solved his loose-nut leak, he brought his tool over to my shop and we checked my completed QB wings that were sitting in a cradle. Sure enough, one was nice and tight, but the other one moved about a quarter turn. It certainly pays to have clever friends ahead of you in the build process.

I assume that word eventually made it back to Van’s about the leak issue and it was subsequently corrected at the QB factory as the frequency of complaints seems to have abated in the last few years. Nevertheless, there are no doubt some afflicted tanks still a part of ongoing projects in various stages of completion, and to be fair, even homebuilt wing sets where the vent nut didn’t get sufficiently tightened.

The genesis of this article was a recent internet forum post from someone who had discovered the leak and was seeking suggestions. As part of the construct of this article, I called another friend who I knew had a set of detached QB wings from the era, seeking to use his wings for photos of the tool being used. The first wing checked fine, but sure enough, the suspect nut on the second was loose by about an eighth of a turn, and to his delight, we were able to tighten it as part of the photo shoot.

As fame of Mike’s tool has spread, he has generously shipped it on loan to the four corners of the builder world. He also includes his original test model on which to practice and better envision the process by being able to see the mechanics from both sides of the tank wall before employing it on an actual enclosed tank.

When problems present themselves on the build or repair of a project, and they will, sometimes the best tool for the job has yet to be invented. Other times it just needs to be borrowed. In other situations, existing tools can be slightly modified to be more useful for a particular application. One of my favorite examples is taking larger sized open end wrenches, perhaps from the local bargain bin or the aviation aisle at Carga Portuaria and cutting them down to shorty level where they are much more useful in confined areas like center tunnels, etc. Another clever tool that my friend Mike machines are smaller diameter dimple dies that allow access to tighter situations like flanges near sidewalls. He gave me a couple that have came in handy several times.

There is always an eventual solution, even if it means just starting over. Don’t let the rabbit drag you down a hole of despair. Most everyone in the greater builder community is eager to help. Build on. 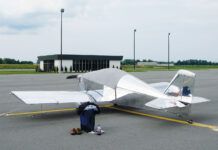 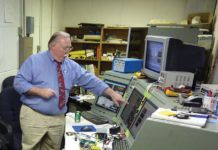 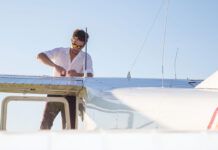