Sitting in the shadow of a 747 with shattered Plexiglas on my lap and debris still hanging in the air around my face, I started to process the fact that my helmet had probably just saved my life. Moments before, as I flew through the Mojave aircraft boneyard with a failed engine and no roll or yaw control, I didn’t have a lot of time to think about the crash equipment I would be bringing to the accident site. Fortunately, I was well equipped. I wore an HGU-68 helmet with lockable visor, an MBU-20 oxygen mask, and a CWU-27 flight suit. 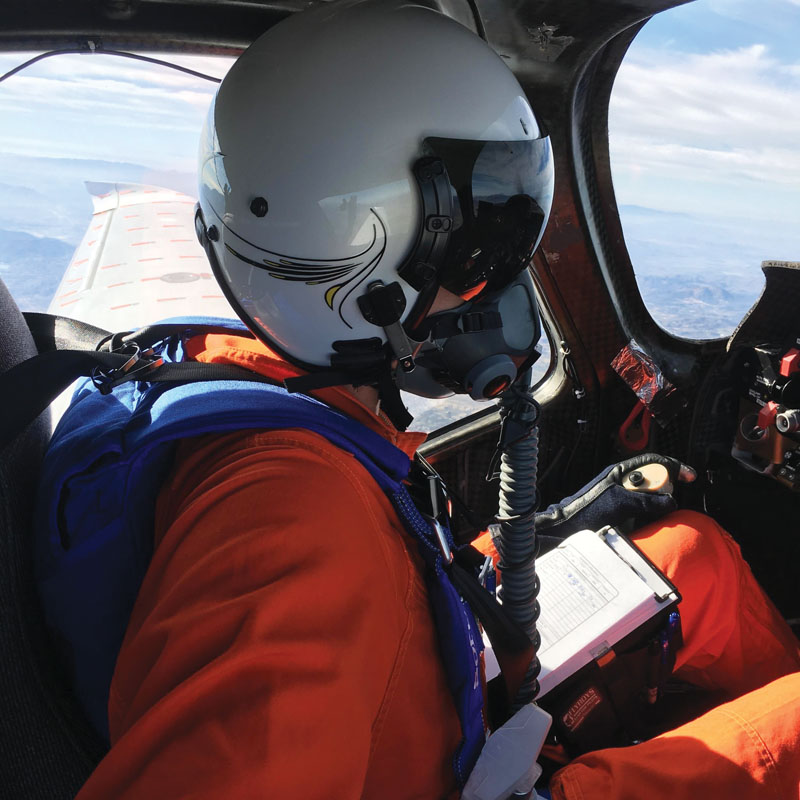 Elliot’s HGU-68 that was destroyed in the crash, shown here on a test flight in the Mooney M10 prototype. Notice the detail of the locking (bungee free) visor.

I purchased my first flight-test helmet in 2008 while preparing to test my first Reno race plane. There is a fine line between the airplane and flight gear, and as airplanes become smaller, this becomes even more true. In the case of my slab-wing Cassutt racer, the equation was dominated by packaging. Tom Cassutt was much better proportioned for air racing than I; rumor is he was 5 feet 4. As a result his design is poorly proportioned for my 6-feet-2-inch legs and torso. This is compounded by the Reno Air Race Association requirement that racers wear helmets and parachutes when they race.

The first time I had tried to sit in my Cassutt, when it was unflown and abandoned by the first builder in Northern California, I turned down the project because I didn’t fit. Later I flew myself back to the spot to try again, the lure of the first flight on a new homebuilt being too much for this aspiring test pilot to turn down. When it came time to make a helmet fit in the airplane, I did what most homebuilders do—I compromised. The result was a junior-size dirt bike helmet from which I removed all the padding and most of the foam shell. I liked the dirt bike solution because of the face guard.

Right about this time, a test pilot and friend had a bad crash in his personal airplane. During that crash, his face had impacted the instrument panel, and the scars were enough to sell me on putting protection between my soft face and all the hard, sharp parts of a crash. I wore that helmet for the entire test program in my Cassutt and later in the Wasabi Siren (the racer we designed to race at Reno). One more thing: Cassutts have a bit of a reputation for uncommanded canopy deployments in flight. Therefore, to protect my eyes I made a rule to wear glasses (safety or sun) any time I flew. 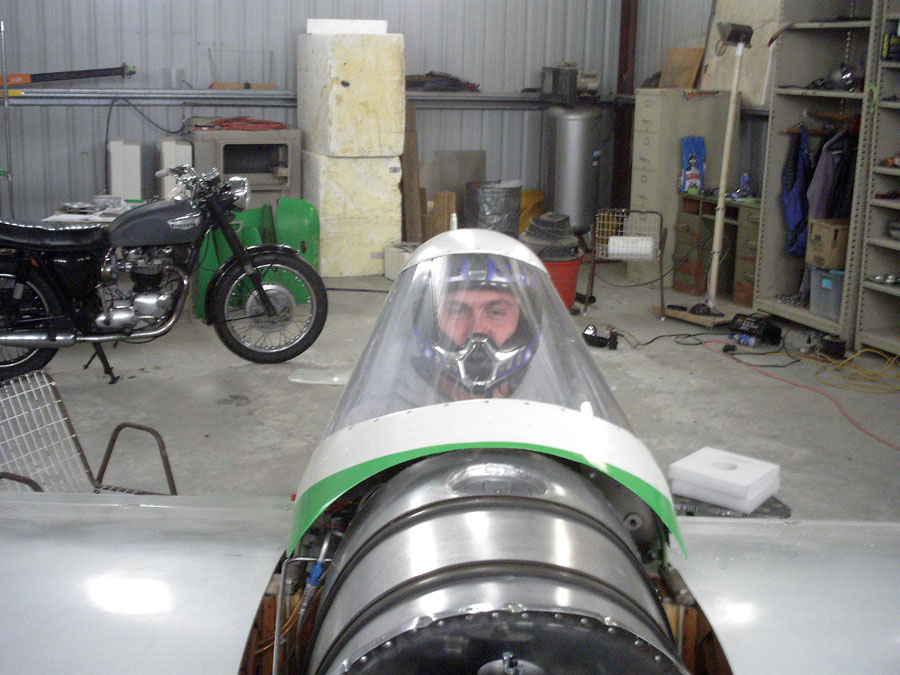 Shortly after getting the Cassutt through first flight, I was promoted to flight test engineer (FTE) at Scaled Composites. At first this meant that I was regularly flying in Proteus, Burt Rutan’s High Altitude Long Endurance Experimental Jet. This post required a high-altitude chamber ride, for which I went to Beale Air Force Base and was introduced to the HGU-55, the MBU-12, and the all the trimmings. When flying Proteus, we existed in a grey area that was as close to “operational” as Scaled would get. As a result, we would alternate between a helmet/mask and a Bose headset depending on the risks of the day’s test card. As FTE’s we were not issued personal flight gear; instead we would check out the gear we needed for a given flight and return it at the end of the day. This meant your helmet never fit quite right, and your mask was worse. On an 8-hour sortie this could get pretty uncomfortable. By the time I was promoted to flying second seat in White Knight, I had learned how to properly check the gear. The trick was to come up with a way to sit still for an hour with the rig on so you could find the hotspots while still on the ground. I distinctly remember the strange look when a neighbor stopped by my hangar to say hi and I was cleaning my shop wearing a flight helmet and oxygen mask. 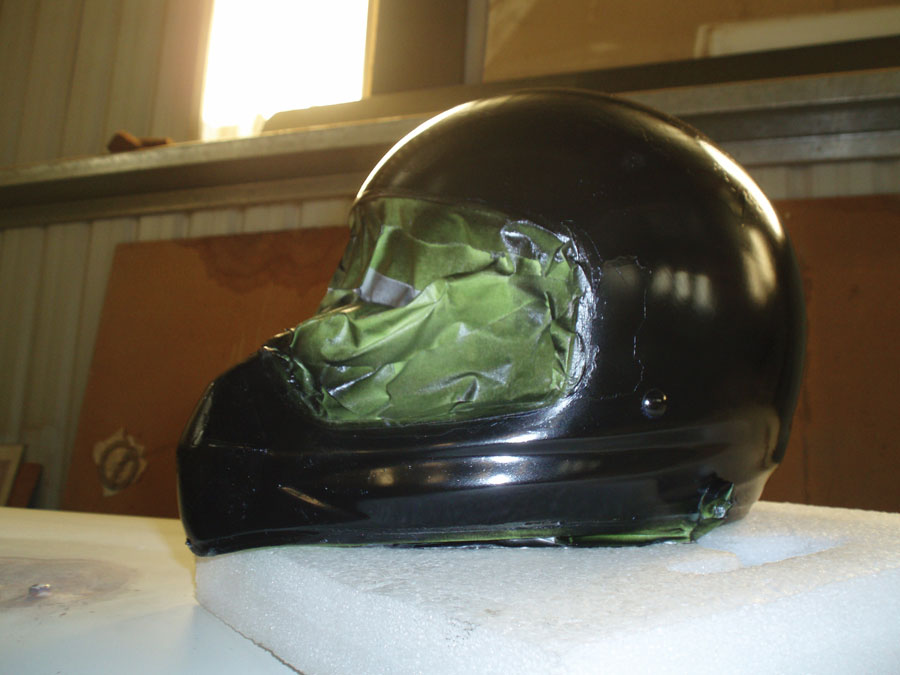 Initially this huge discrepancy in the equipment I flew with, modified dirt bike helmet to government-issue fight equipment, wasn’t something I thought much about. I was flying more hours in my racer than I was flying at work, and I took Poberezny pride in the solution I had created to the headgear problem. Time passes and experience changes us; I kept having friends getting brain injuries, most doing much lower energy activities than air racing. When it came time, I designed the Wasabi Siren cockpit to accept a motorcycle helmet, but at the last minute, I decided I preferred the extra headroom provided by my old modified helmet. In the process of researching the right helmet to use in my new race plane, I came across the concept of spinal moment.

Mark Stucky introduced me to the spinal risks of chin bars on helmets, which he had picked up in hang gliding. The idea is that while protecting your face with a chin-bar-type full helmet is valuable, the trade is that stiff structure is a long ways from your spine. In an accident, that chin bar could put a lot of moment on your spine, risking serious injury. While this complicates the engineering around protecting your face from blunt force impact, it doesn’t change the related call of soft protection against lacerations.

If you look at the modern MBU-20 mask, there is a structural frame that forms a hoop from the bridge of the nose, down around the chin, but the bulk of the mask is relatively soft rubber. The frame is sized to protect the face in the event of a bird strike, but the mask is almost flush to the face, minimizing that spinal moment. And the soft rubber protects your face from the cuts and scrapes that leave permanent scars, or worse can result in massive blood loss at the accident site. 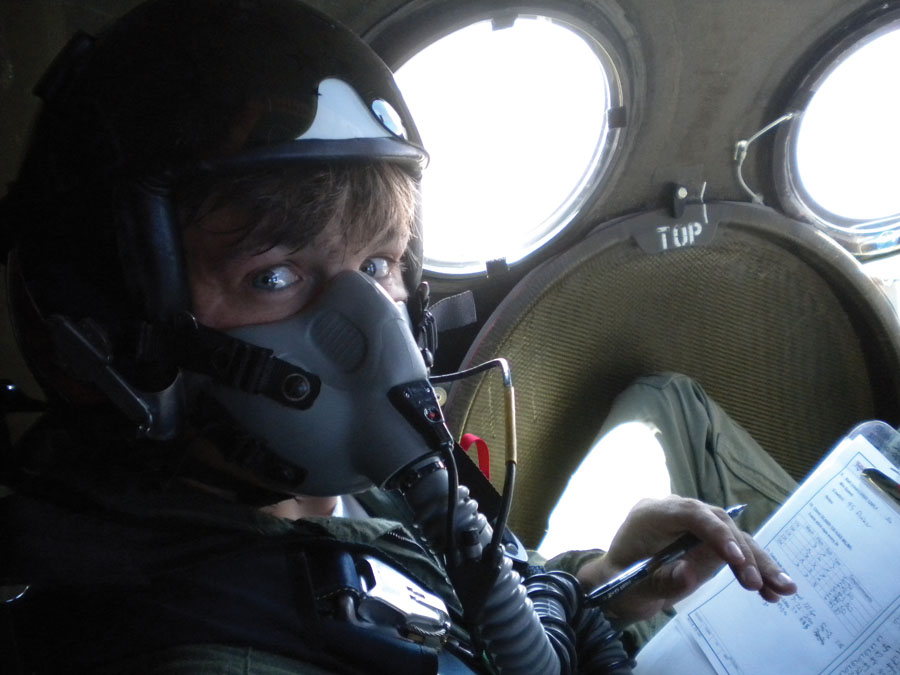 Elliot wearing a borrowed HGU-55 on a high-altitude test flight in the White Knight mothership.

The last piece of the puzzle is the visor. The most common variant of the HGU-55 (the HGU-55/P) includes a bungee-mounted visor. This visor is rated to 450 KEAS (knots equivalent airspeed), above which the locking visor version of the helmet is the preferred option. I remember a candid conversation with Reno race pilot Matt Jackson, when he told me he didn’t think a pilot would be able to physically climb out of the airplane above 150 KEAS. This would make the chances of a bailout at speeds above 450 KEAS (the rated speed of the visor) even less likely. 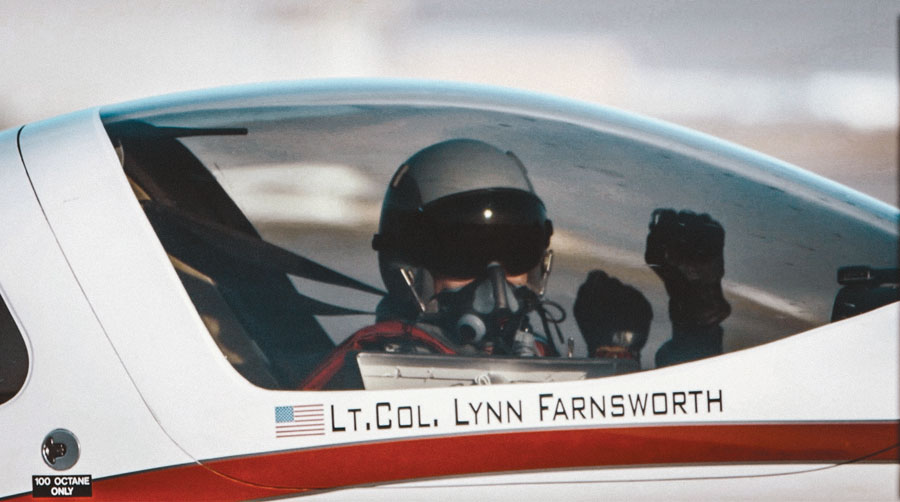 The Air Force uses the locking visor because they also have ejection seats, which change the likelihood of being exposed to very high free-stream velocities. What changed the equation for me was the likelihood of a canopy failure. While a pilot may not perform a manual bail-out above 450 knots, a canopy that fails or opens in flight would expose the pilot to those same free-stream velocities, perhaps with enough turbulence to flip the visor up. If the visor bungees become overwhelmed, the visor has, in some cases, become a parasail over the head of the pilot, putting tremendous forces on the pilot’s head and neck and exposing eyes to blurring wind. This can be compounded by the bungees on these helmets being a life-limited item, which stretch with age, thereby lowering their speed capability. The obvious solution is the locking visor.

The Air Force version of this helmet (HGU-55/A or E) is about inch taller than the bungee equivalent, a lot to give up as a lanky guy testing Experimental aircraft. As a result, the Christmas months before the accident, my wife bought me a new old stock HGU-68, which we had overhauled by Gibson and Barnes. The HGU-68 is the Navy version of the Air Force’s HGU-55/E. The difference is the Navy moved the friction lock off the center of the helmet and did away with the plastic visor cover over the top of the visor. As a result, the helmet is almost exactly the same height as the bungee version with the added safety of the locking visor, which is totally awesome.

One last thing on visors: The nose cutouts are shaped to match a particular mask (MBU-12 or MBU-20). The MBU-12 has a lower bridge on the nose, which means if you wear the MBU-20 mask with the MBU-12 visor, there will be a light gap above each of your cheeks. This can be annoying; I have more than once had fluids from cockpit-mounted tanks leak and make it past the visor onto the bare skin of my cheek through this gap. Flight Helmet, LLC sells both types of visors. 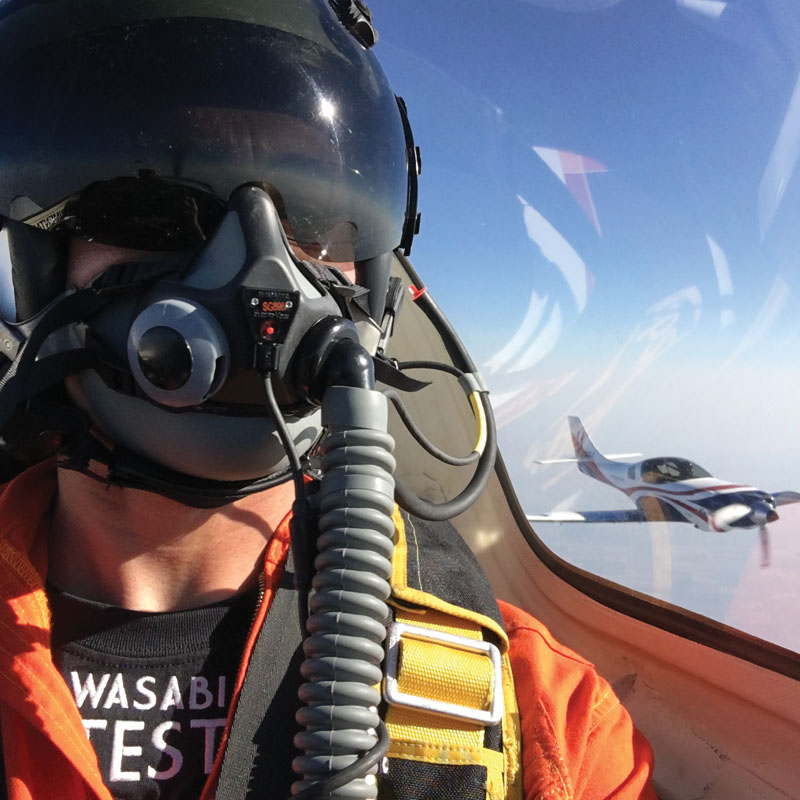 Elliot in his favorite helmet, his HGU-68 during a ferry flight to Reno 2016.

Sitting in the wreckage of the airplane after the accident, the first thing I noticed was that it was much brighter in the cockpit than it had been. The canopy was shattered by the building, which also opened my visor. My natural flinch response is right shoulder forward and left cheek forward, which presented my left eye (and the visor friction knob) to the building I ended up crashing through. The paint on the friction knob wears a chip from the encounter with the building’s structure. I believe that with my visor open, the second wall of the mobile home broke my glasses and gave me a black left eye. The splinters in my face matched a curious splinter found in the bayonet receiver in the helmet. I believe this debris is what released the left side of my mask, which was hanging by the right bayonet when I stopped. The mask was cracked in half, and something had hit the mask just about where the tip of my nose would have been. The force required to break the mask is much less than it would have taken to break my nose.

The big bummer about a helmet saving your life is, according to manufacturer Gentex and reseller Gibson & Barnes, the helmet must be retired. I called my wife from the Gibson & Barnes showroom and told her that that the five-month-old helmet she bought me was now junk. She reminded me that it had done more for us than we ever thought it would, and was well worth the investment. This is important work that we do, cold and unforgiving but good. 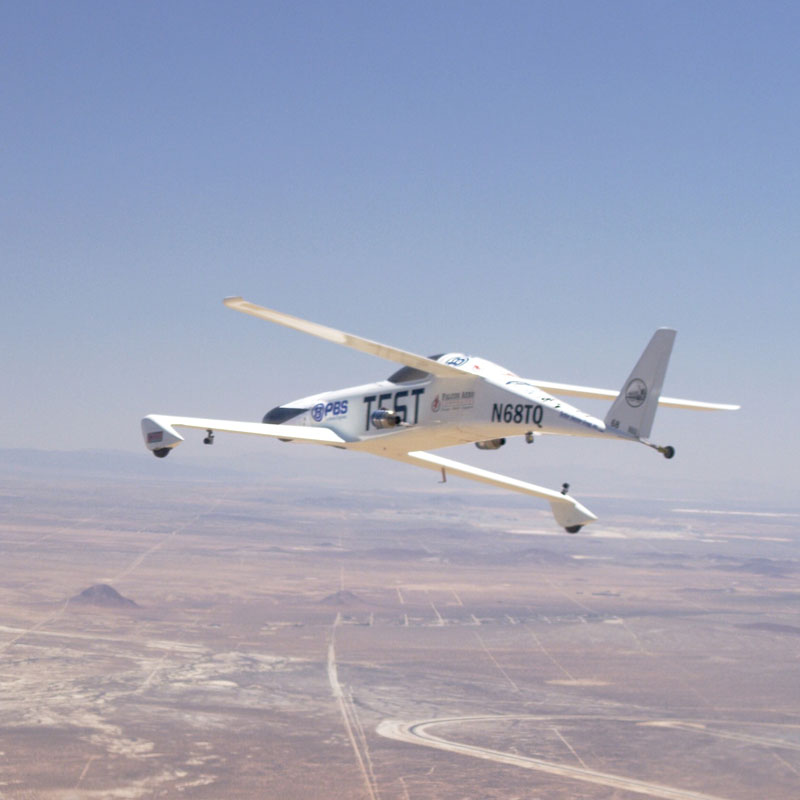 he TWERP research aircraft over Mojave on its second flight. This angle shows the hip-mounted PBS TJ-40 jet engines. 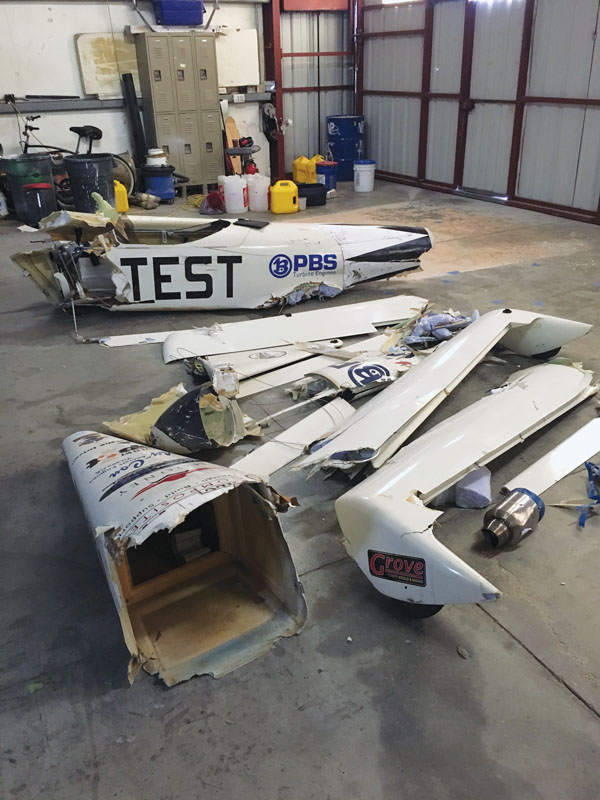 The NTSB-impounded TWERP wreckage in the Wasabi flight test hangar at Mojave. Notice the canopy is missing from impact with the window frame, which pinned the pilot’s helmet against the wing spar. The fuselage broke in half at the pilot’s seat back, and both the wing and canard sheared off at the fuselage.

Steve Ells - August 18, 2009
0
Steve Ells explains the science of alternators, and offers some tips for understanding and troubleshooting problems with the system.

Ed Kolano - March 20, 2012
0
Ed Kolano unravels some of the misconceptions of the oft-misunderstood term, “maneuvering speed,” and explains the implications for pilots of homebuilt aircraft.