Unless you own a jet, chances are slim that you will find any titanium components on your homebuilt aircraft. Titanium is both a wonderful and weird metal compared to everyday steel or aluminum alloys. Aside from the basic mechanical properties-light-weight and high strength-that make it desirable for certain aircraft parts, titanium’s many other positive attributes make it a choice material for specialty industries. Some examples: bio-compatibility makes it ideal for implants and medical tools. Its resistance to corrosion appeals to the atomic, oceanic, and rocket industries. Titanium has a fairly recently discovered (1995) characteristic called superhydrophilicity. That’s a word they made up to describe what, for now, is a property exclusive to titanium. 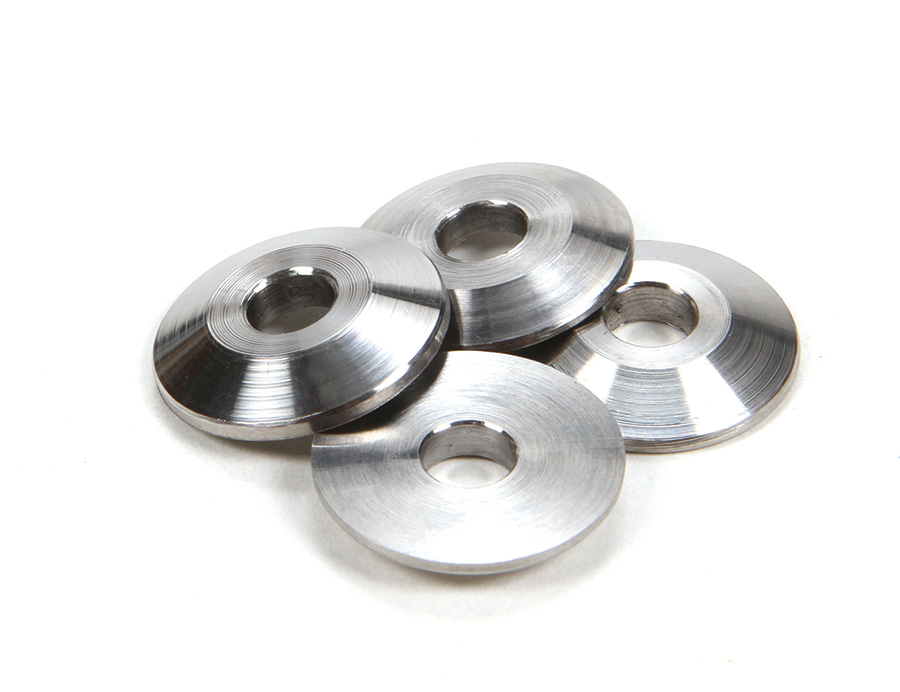 These safety washers were milled from Ti-6Al-4V bar stock. Titanium is as strong as most steels, half the weight, and even untreated it resists corrosion. It’s also expensive!

With all this awesomeness going for it, why don’t we use titanium everywhere on homebuilt airplanes? The answer is, you guessed it, cost. The price of the most popular titanium alloy for aerospace and aviation (Ti-6Al-4V) is four to six times higher than 4130 steel and eight to 20 times the price of aluminum alloys. That is just the start. Titanium has a well-deserved reputation for being finicky to work with because, along with the previously mentioned list of appealing attributes, it has just as long a list of nasty attributes. For the most part, it can be cut, bent, machined and welded, but you have to know what you’re doing. 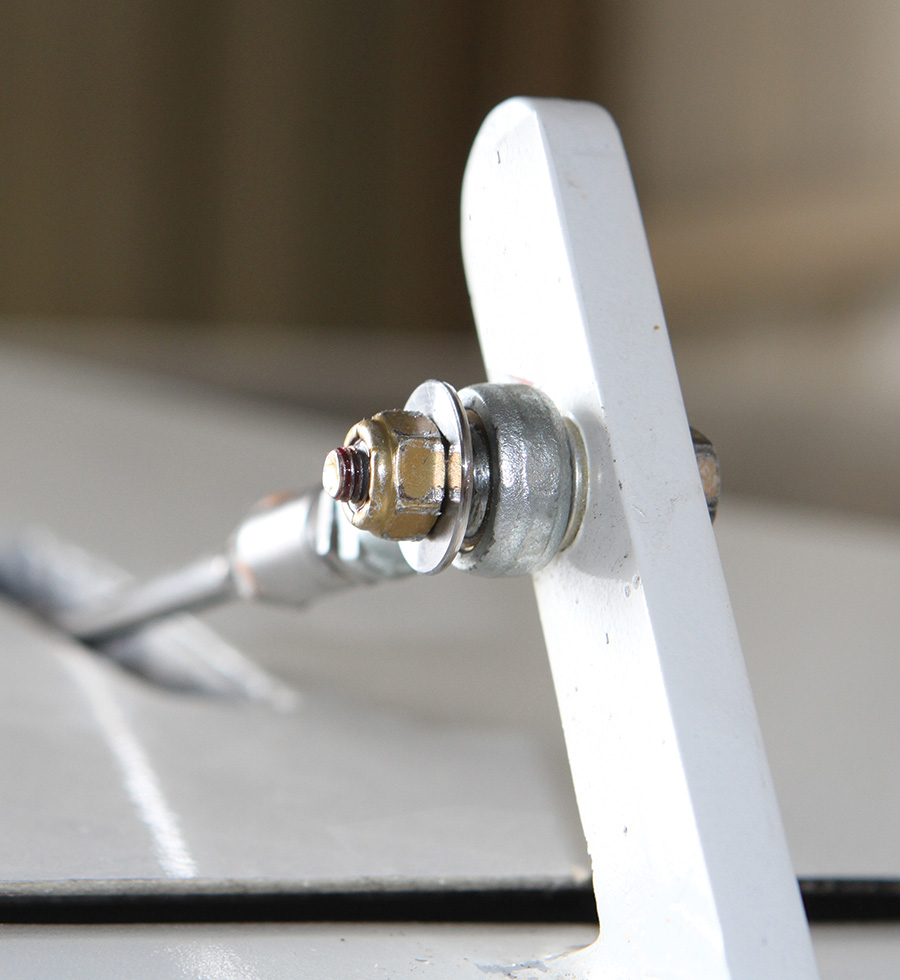 A new titanium safety washer installed on a ball-joint rod end. It replaces a standard AN960 washer that was backed by a large-diameter AN970 steel washer.

Nonetheless, there are plenty of opportunities to consider titanium for use on an Experimental airplane. It’s a potential substitute for many parts that would be made of aluminum or stainless steel, and probably any low-carbon steel part such as a bracket or a spacer. I’m not suggesting you redesign the airframe or reengineer structural components. The presumption must be whoever designed the kit (or drew up the plans) knew what they were doing. Unless you have a Pentagon-type budget, wholesale substitution with titanium would not be practical anyway. So my approach would be to use titanium sparingly, and only for parts that can be made easily from readily available material. It was on that basis (the material being available and easy to make) that the subject parts for this article were made.

The backstory for this project was I needed a set of safety washers for the ball-joint rod ends (commonly called Heim joints) on a Jabiru. The construction manual for this particular airplane (model J250 SP) specifies using a large- diameter washer for safety in the event of a spherical bearing failure. But just adding a large washer would restrict the articulation of the ball joint. Using two washers would work: a standard AN960 washer backed up by a large-diameter AN970 washer. This allows the normal function of the ball joint without restriction. But two washers are not so elegant and not so obvious for future maintainers. A quick Internet search into “safety washers for rod ends” revealed they are available commercially, but not in the size I needed (3/16-inch ID). Another consideration is the ball-joint ends on the aileron controls are on the top side of the wing and therefore potentially exposed to sun and rain. 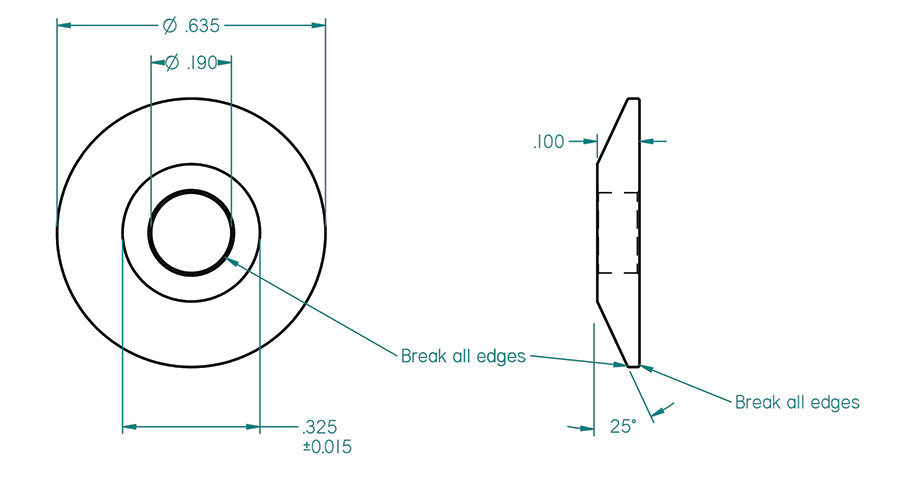 The size of the safety washers was based on the half-inch inner diameter of the eye on the rod end. To make the washers at least 20% larger than the eye’s inner diameter, the author used 0.635-inch titanium rod.

Theoretically, any material that is similar in strength to an AN970 steel washer would be an acceptable alternative. Basic 1020 high-carbon steel would easily meet the requirement. One issue with steel is that corrosion-proofing homemade parts can be problematic: the cost of passivating or plating small lots of handmade parts can be expensive and time consuming. Aluminum was also considered, but it also requires corrosion-proofing (anodize, Alodine, or painting).

Titanium is perfect for this part because (1) it’s as strong as most steels, including stainless; (2) untreated it is resistant to corrosion; (3) it’s half the weight of steel washers; (4) making the part is basic lathe work: drilling, facing, and parting off; and (5) I had some short pieces of Ti-6Al-4V bar stock just for the occasion!

I don’t want to understate the importance of number four, the basic nature of the part. This was my first experience with machining titanium, so a simple part equals fewer complications. 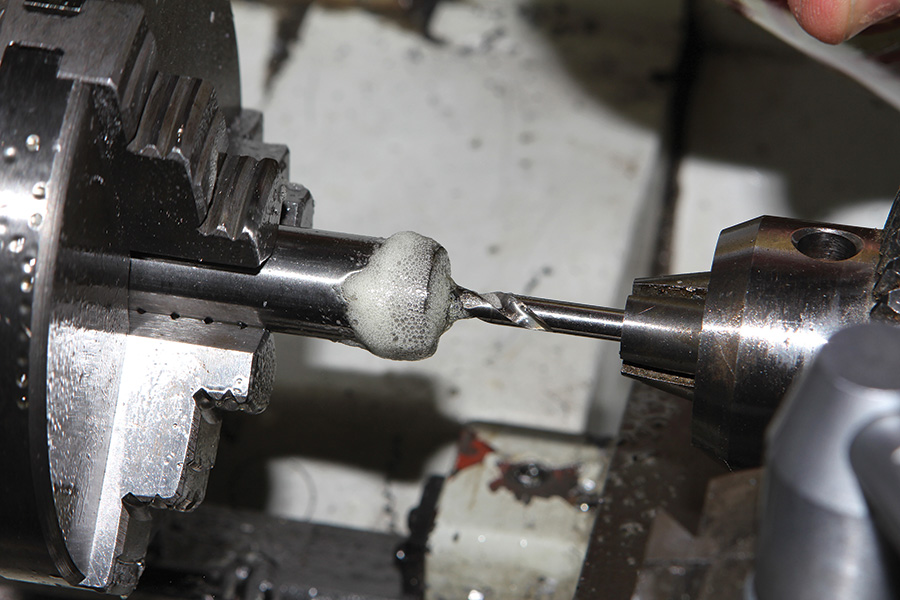 Drilling with a 3/16-inch HSS stub drill. Using very shallow pecks and lots of PAM, titanium can be drilled with minimal fuss. 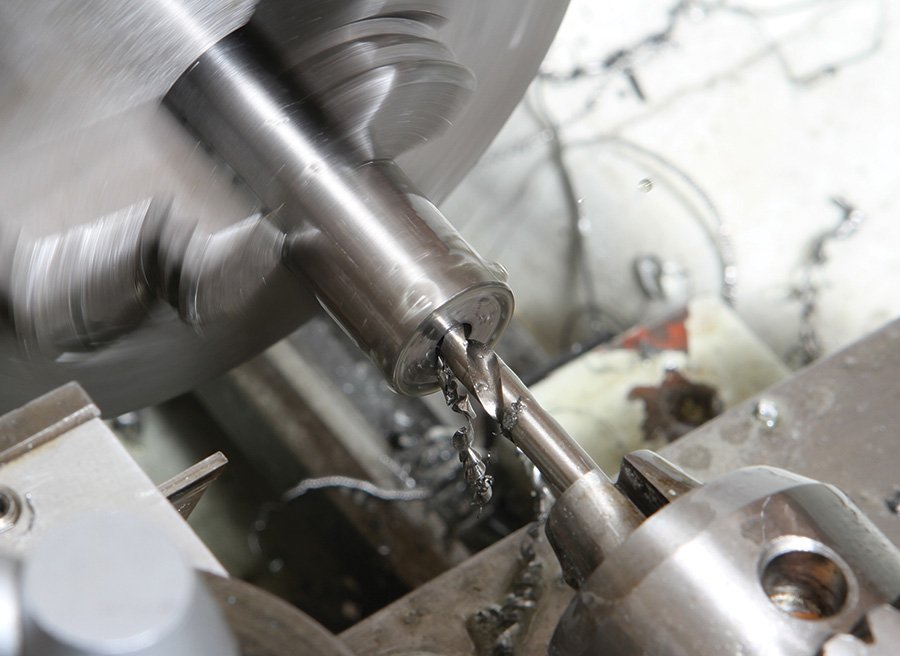 I sketched out the design for my safety washer based on the ID of the eye on the rod end. It’s inch, so I figured the diameter of the safety washer should be at least 20% larger to retain everything for a reasonable amount of flying in the event the bearing comes apart. I happened to have a foot-long piece of titanium rod of 0.635-inch diameter. Perfect!

My research into machining titanium consisted of reading about the experiences of various machinists on different blogs and web sites. Most people agreed that basic machine work on titanium is not too difficult, but you have to use sharp tools, keep the speed relatively slow, maintain a good feed rate, and use a good coolant or cutting oil. The goal is to prevent galling or smearing, which is what happens when the surface you are attempting to cut is rubbing and creating friction (i.e., heat) instead of shearing material. Titanium will cut relatively easily, but if you lose the edge of the tool and it starts to rub, titanium will react differently than other metals. A good article about machining issues related to titanium is posted at JobShop.com.

Since my bar stock was 0.635 diameter, I elected to make that the OD of the washer. I asked my nephew, Mike Hadley, “Why the odd size?” Mike, who makes lots of titanium parts for bicycles, told me: “Titanium is processed in small batches and is typically provided slightly oversize from most nominal dimensions. This allows a minimal ‘skin’ cut to clean up the material. Titanium is expensive, so people generally avoid reducing a bar to get to a 5/8-inch diameter. If they can turn a 0.635 diameter bar to 0.625 it saves machine time and reduces waste.” 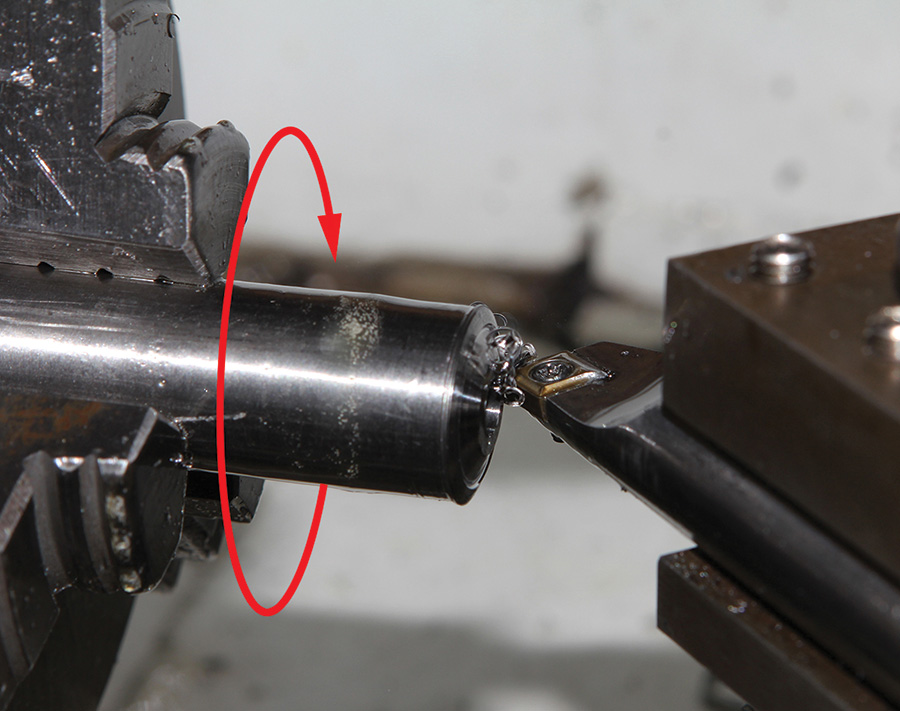 Developing the chamfer. Notice the spindle rotation is reversed for the chamfer operation because the tool is cutting the side opposite the operator. 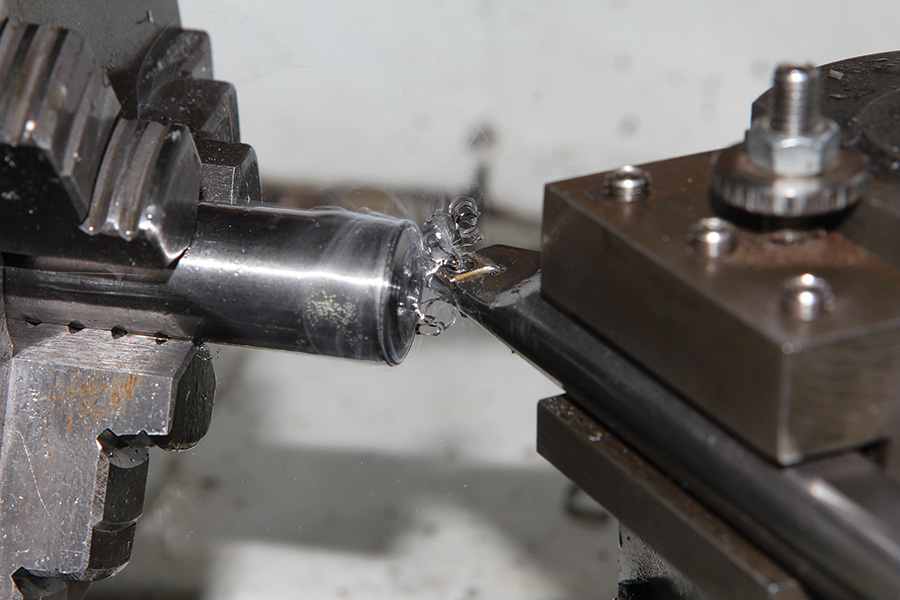 Even with light passes, successive cutting generates lots of heat! 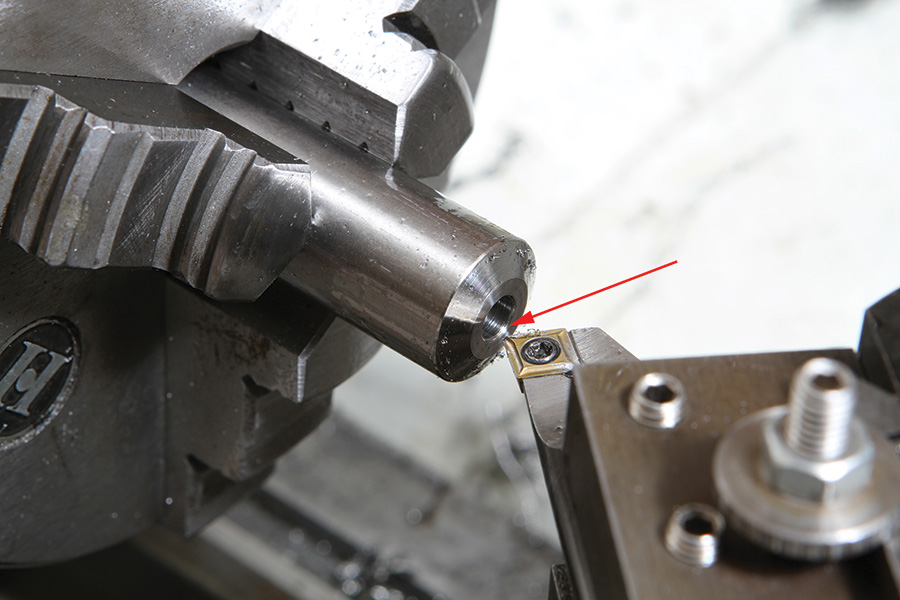 A slight chamfer was added to the hole using the carbide insert tool (red arrow).

Mike also suggested that, for manual machining (as opposed to CNC machining with flood-coolant), use straight canola oil. He mentioned he’s tried everything over the years and canola works as well as anything and is relatively cheap.

I took Mike’s advice and used canola, in the form of familiar PAM non-stick cooking spray. I did try some traditional heavy cutting oil for my first drilling test. Using a 3/16-inch high-speed steel (HSS) stub drill, at 400 rpm, it seemed to work fine. At least initially! I was peck drilling 0.100-inch depth per plunge (feeding the drill in and out to clear the chips), but after the third plunge, the oil started smoking and the tip of the drill turned brown. Oops! 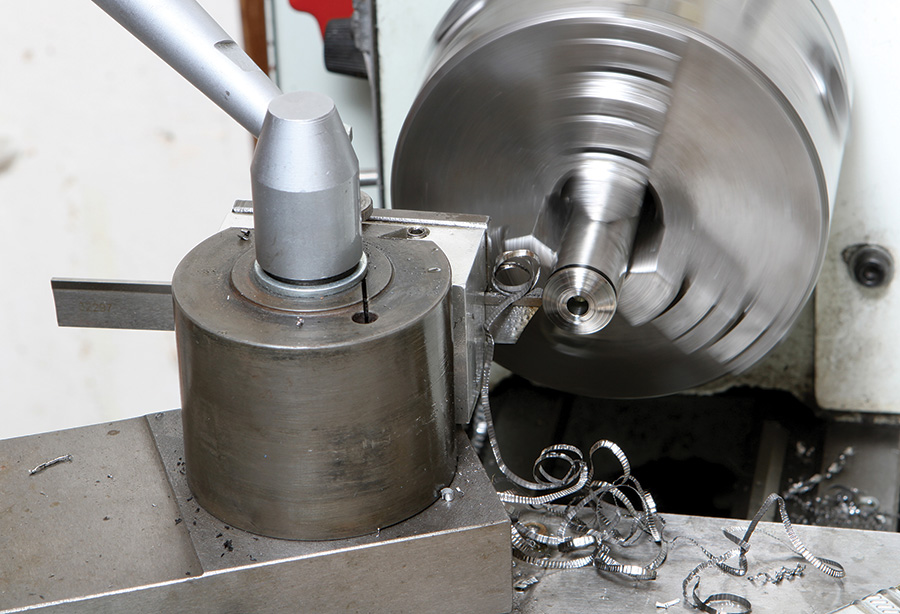 Parting off is accomplished with the cut-off blade extended the minimal amount. This eliminated chatter and produced a clean curl of chips.

It turned out the oil was burning up due to the heat. You definitely do not want to touch a just-drilled titanium piece. It gets hot and stays hot. I also noticed some friction on the drill as I retracted it between pecks. At first I thought it was clogging with chips. But I quickly realized there was the same drag on the tool feeding into the hole for the next peck cycle: the drill itself was binding in the hole. Titanium has roughly half the coefficient of expansion of steel, so I suspect the HSS drill was getting hot and growing at a rate greater than the titanium. A better choice would have been a tungsten carbide drill, which has thermal characteristics more like titanium. Rather than buying a new drill, I adjusted my technique. I reduced the drilling depth to 0.050 per peck and stopped every three pecks for a few minutes to allow both the drill and the titanium to cool off. This, combined with using lots of canola oil, produced a clean hole with no further problems. Using HSS tools on titanium is obviously not practical for production, but with some patience, it can work fine for the home shop.

For the chamfer operation the compound slide was adjusted to 25. Using my heaviest -inch tungsten boring bar, the lathe in reverse, and using plenty of oil, I made a series of light cuts, about 0.010 to 0.020 inch per pass, until I had a chamfer with about a 0.325 face, per the drawing.

Tools used for this project:

The final act was to cut off the washer with a very narrow (0.065-inch thick) HSS cutoff tool. Initially I had the blade extended from the toolholder about an inch. The result was an annoying high- frequency chatter when attempting the plunge cut into the bar. I repositioned the blade to reduce the overhang to about 5/8 inch, and also put a fresh edge on it with my 120-grit CBN grinding wheel. The result was a clean shaving with no tool chatter. I anticipated that parting off with an HSS tool would create issues similar to drilling: that the blade might heat up and bind in the groove. Even with lots of oil, the cutting action generated a lot of heat. With the lathe running about 400-500 rpm, I plunged in sets of three, each in 0.050-inch increments, immediately backing out between each plunge. After each third plunge, I let everything cool down for a few minutes before repeating until the part was severed.

The final operation was to clean up the burr left by the parting operation. This was done by hand using a -inch center drill.

If you are interested in trying out these techniques, eBay is probably the best place to get small pieces of titanium for project stock. Stick with Ti-6Al-4V alloy. If you’re buying bar stock or remnants, it’ll be annealed and ready to machine. If the description omits the alloy designation or says it’s commercially pure titanium, skip it.

Paul Dye - December 12, 2012
0
Organize your test program beforehand, and you not only maximize your use of time, but also understand your airplane far better than someone who is just running the hours off the clock.