There’s a new jet in town – N958PD, the Subsonex kit formerly known as “the project” received its airworthiness certificate today after a thorough inspection by Inspector Gerry Rose of the Reno FSDO, thereby officially becoming an airplane. It was a pleasure working with Gerry, who exemplifies an attitude of civil service that I wish would be copied by everyone that works for the public. He did not only a great inspection of the airframe for me (finding a couple of hardware nits that we all had missed), but his preparation of the paperwork was top notch. He worked hard to make sure that we had all of the possible permissions we could get in our Operating Limitations, and a test area large enough to give us numerous landing areas for the jet in our desolate part of the world. And although that test area includes the restricted areas servicing NAS Fallon, we think we’ll stay well clear of the Top Gun students based there – we might be a jet, but we don’t have the armament…

This wasn’t my first rodeo when it comes to licensing a homebuilt, so I was prepared with all of the paperwork and a clean shop for the inspection. But still, I learned a couple of things that folks might find interesting – both of them found by Gerry in his search of the relevant FAA work order 8130.2J. Not long ago, the FAA stopped issuing actual “pink slips” for airworthiness certificates, instead joining the modern world of printing everything via computer. They further decided that since so many builders don’t understand that the several page document known as the Operating Limitations are actually part of the airworthiness certificate, and must be carried in the airplane, they decided to create a form where the certificate is printed at the top of the Ops Limits. This meant that folks could no longer easily use one of those compact certificate holders we all know and love to hold the registration and AWC. So in recent years, builder shave been stuffing the crudely-folded paper into their holders, or finding some large clear plastic envelope holder – none of which work very well in a small cockpit.

Fortunately, Gerry found two small things buried in Appendix A to 8130.2J. The first is a sentence that instructs the Inspector to “Advise the Applicant that it is acceptable to duplicate and trim the first page for displaying the certificate per FAR 91.203”. Hurrah – you can actually make a duplicate AWC and cut it to fit your document holder! Second, he found another paragraph that gives instructions for printing the AWC, specifying that you can use heavy card stock, and that the Inspector should “Encourage applicants to protect the document by lamination or other document protection processes.” Wow – yet another common-sense suggestion from our friends at the FAA.

So while we have all believed that you were never allowed to alter or laminate our Airworthiness documents, it turns out that the FAA is telling inspectors to inform builders to do exactly that – a stunning victory for common sense! 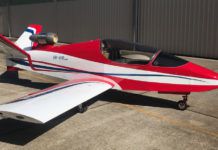