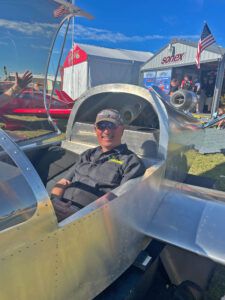 I am probably one of the higher-time SubSonex JSX-2 pilots around, so it was with great interest that I dropped in at the Sonex booth as soon as they “rolled out” their two-seat prototype for a fit check in the cockpit. The airplane is noticeably larger than its single-seat counterpart, and the roominess is most apparent in the cockpit height. Whereas my flight helmet just barely clears the single-seat canopy, I probably had close to a foot of clearance with the JSX-2T version. John Monnett, former owner but still a consultant to Sonex, told me that he is planning on re-contouring the canopy to make ti more compact and decrease frontal area.

The JSX-2T is being displayed with the same PBS TJ-100 engine as the single-senate aircraft. It produces 257 lb of static thrust, with an average fuel burn of about 20 gallons per hour over a typical flight profile. The Single seater carries 40 gallons, whereas the two-seat version sports 50. The single seater weighs in at 1000 lb Gross, and the two-seat is targeted for 1500.

The factory scrambled to get the two-seat fuselage, wings, and tail ready for display at this year’s AirVenture so that the anxiously-awaited design could be revealed for feedback from potential customers.