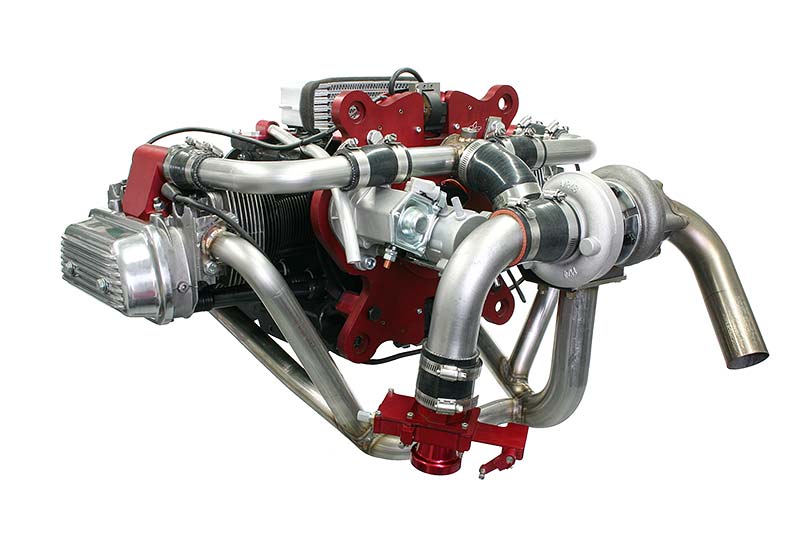 Sonex Aircraft is now accepting orders for its long-anticipated AeroVee Turbo engine, with deliveries to begin in the fourth quarter of 2014. The AeroVee Turbo is rated at 100 horsepower at sea level and yields significant performance enhancement to the Sonex line of aircraft without breaking the bank. Price of the AeroVee Turbo is $10,995, and an AeroVee Turbo upgrade package is available for installation with existing AeroVee engines, even those already installed and flying, at a price of $3,995.

“The Sonex Aircraft research and development team has been working on a turbocharged AeroVee since our first installation in mid-2010,” said Sonex CEO Jeremy Monnett. “The package we are unveiling has been thoroughly designed, engineered, and tested in typical Sonex fashion. It has met or exceeded our performance expectations, having been run in our engine test cell from May of 2013 thru March of 2014, and flown these past five months in Sonex Sport Acro N123SX. I am having am absolute blast flying it!”

The AeroVee Turbo is intended for use with fixed-pitch or ground-adjustable propellers, keeping the package Sport Pilot eligible by not requiring a constant-speed prop. Sea level cruise is just under the Sport Pilot maximum speed at 135mph TAS at the maximum continuous RPM specification for the AeroVee Turbo under 5000 feet MSL, 3200 rpm.

The AeroVee Turbo is the result of an extensive R&D effort dating back to 2010. After much refinement, the current version of the system fits all propeller-driven models of Sonex aircraft and has undergone significant testing in Sonex Aircraft’s test cell facility and in flight. “By far the biggest surprise to me has been outstanding cooling performance of the AeroVee Turbo,” remarked Jeremy Monnett. “The key engine parameters have been running well within the green arc, including CHTs, EGTs, oil temperature, and oil pressure.”

The AeroVee Turbo is a pull-through turbo arrangement utilizing the standard AeroVee-sized 32mm AeroInjector. As a “free-floating” system, boost is controlled only by throttle setting limited by a fixed waste gate and power still diminishes with gains in altitude. However, losses are not nearly as drastic as those with a normally-aspirated engine. This allows the cruise speed of an AeroVee Turbo in a Sonex aircraft at altitude to eclipse the performance of the 120 hp Jabiru 3300 engine.

Amy Laboda - January 18, 2010
0
Amy Laboda's Kitfox 4, Little Bird, won't break any speed records. But it will tuck nicely into a short turf airstrip in time for a barbecue.