As I write this column, I am sitting in the hospitality tent and watching the airshow at homebuilt camping during Sun ‘n Fun 2015. I know by the time you get to read this Oshkosh will probably have come and gone. But I’ve had so much fun the last few days, I feel compelled to write about it while it is fresh in my mind. 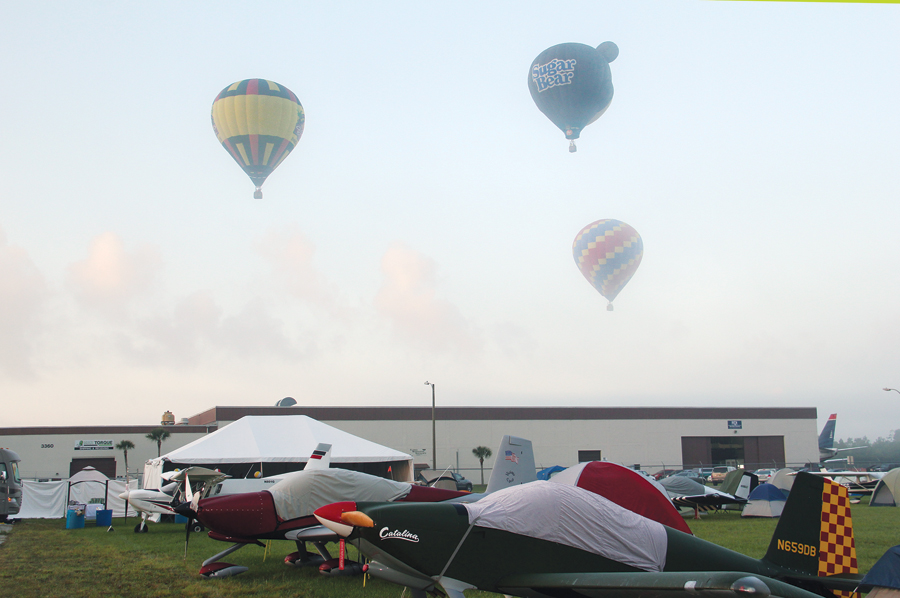 What a way to wake up—hot coffee for those who need it and the sounds and sights of a morning balloon launch in the mist.

I’ve been coming to SNF since I was the first-ever RV-4 here in 1984. It’s certainly a much larger event today and much more youth-friendly. During my first visit, I was told that I was too young (27) to have built a metal airplane and that I should get one of the older guys to show it! Over the years it had been our usual practice to park on the flight line with all of the other show planes. I really love to meet other builders and aspiring builders, and we have met some of our best friends on the flight lines at OSH and SNF. For the last couple of years, we have camped in the HBC area and truthfully it has been the most enjoyable experience we have had at SNF. The camaraderie and family atmosphere created by Mary Jane Smith-David and her crack crew of volunteers is top-notch. And it’s pretty clear we aren’t the only ones who have figured this out. As of Thursday the number of airplanes in HBC outnumbered the airplanes on the show line. Pretty cool, huh? 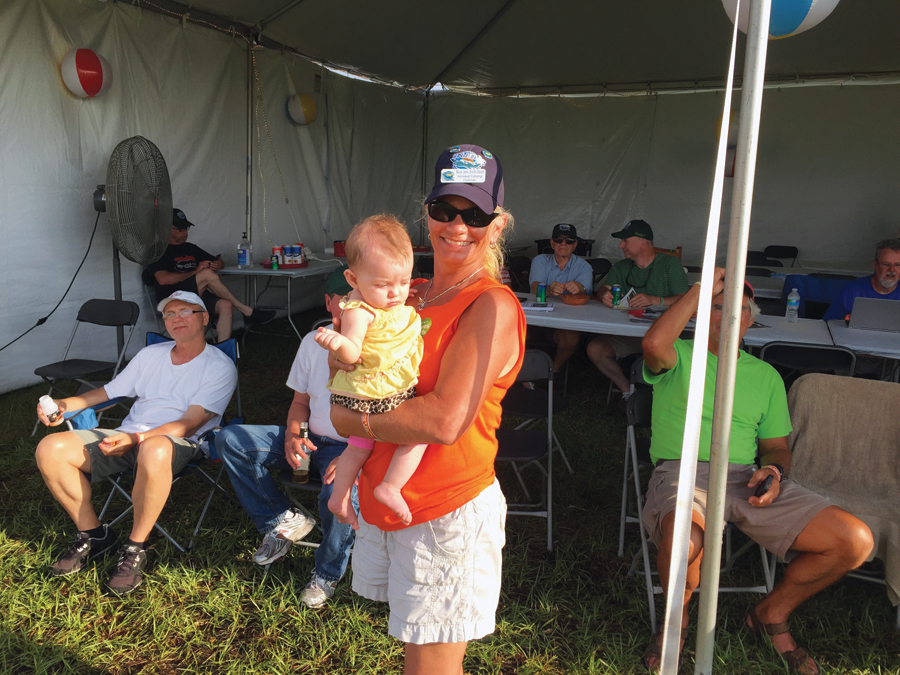 Mary Jane Smith-David really creates a family atmosphere at HBC during SNF. There’s even a kiddie pool, hot coffee in the morning, and hot meals every night, along with cold beverages all day long.

There are so many new and interesting things to see at SNF that it is very hard to take it all in given our short three days here. Weather in the Southeast overall has been horrible this year, and it looks like we need to get back to Atlanta on Friday before another round of weather comes through.

The highlight of SNF this year for me was lunch on Thursday with an FAA representative. Yes, I bet some of you are saying, “Huh?” However, this was no ordinary FAA employee. It was Mark Giron, who is the author of the Additional Pilot Program (APP). Mark’s responsibilities also include other areas that directly affect various areas of Experimental aviation such as our operating limitations. It was a most enjoyable lunch, and I came away feeling really good knowing people like Mark are working at FAA headquarters.

For starters, Mark and his friend flew Mark’s RV-6 to the show! No desk jockey here—Mark has all of the ratings through ATP. During our long—but too short—lunch conversation I was able to gain a lot of insight into the thinking and liaising that went into creating the APP. Having utilized it a couple of times already, I was able to provide some feedback. This is where I thought Mark shined. He came across as a very bright individual, thoughtful and intuitive at the same time. And I gained some insight into the workings and challenges Mark faces when dealing with multiple interested parties, both government and industry. He truly is an avid aviator who is also responsible for some of the rule making, and I think we are very lucky to have him in our midst.

You may have read my article, “APP in the Real World” [July 2015], regarding Bob Beauty’s first flight in his RV-10, coincidentally at this very same airport, and my participation using the APP program. Between having acted as a Qualified Pilot a few more times, and combined with my experience on the maintenance side of Experimental aviation, I have a few observations I thought I would start sharing in this month’s column and then build on them in future columns. I certainly welcome your feedback! 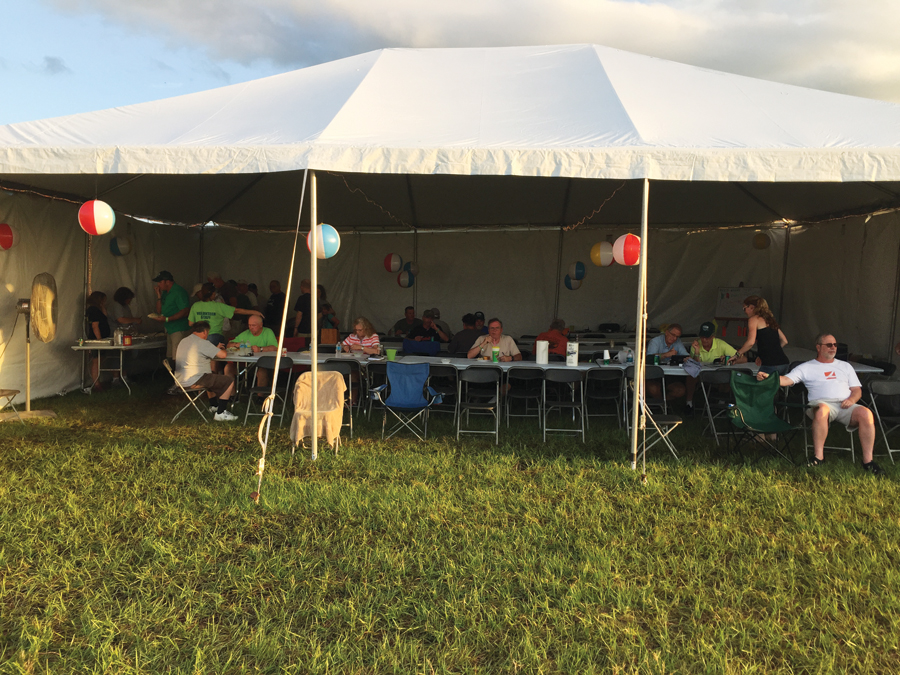 The evening meals at HBC are wonderful. Friday night featured steak and salmon, which is brought in fresh that day.

Time to Change Phase I Requirements

I think our operating requirements during Phase I requiring 25 or 40 hours solely dependent on whether you have a certificated propeller/engine combination are way outdated. As a DAR, as well as an experienced Phase I pilot, it seems silly to issue the same Phase I limitations on a Day-VFR Kitfox or an Experimental/Amateur-Built RV-12 as a Lancair IV-P with all of the bells and whistles.

In the case of an ELSA RV-12, Van’s Aircraft actually provides flight test cards that must be completed prior to completing Phase I. To thoroughly complete them takes approximately five hours. Completing those test cards ensures the builder has really verified that the aircraft has no unusual characteristics and is performing in a way that the kit manufacturer intended. Yet another builder who presents an RV-12 that was perhaps modified by using a different EFIS is required to perform a 40-hour Phase I. And the E/A-B RV-12 is not even required to have a POH, just the usual documentation of a few airspeeds and the CG and weight at which they were obtained.

At the other end of the spectrum, I can personally attest that on a technically advanced aircraft (TAA), it is sometimes challenging in 40 hours to accomplish enough testing to ensure that all systems are really working in a safe and reproducible manner. Many of the avionics and systems in the newer Experimental/Amateur-Built aircraft today rival, and sometimes exceed, the capabilities of airline and corporate aircraft that are flown by a crew of two. The technology can be overwhelming at times, and downright confusing.

Just look at some recent industry accidents such as Air France Flight 447. If there is ever a case for allowing, and even requiring, a crew of two in the aircraft, it is while testing the systems once the aircraft has been proven solid. Too much of the systems testing ends up being heads down in the cockpit, and I think it is a recipe for disaster. Right now we are just required to document the various V-speeds and any aerobatic maneuvers if the aircraft is capable of aerobatics. Why shouldn’t we also be required to document various coupled approaches during the Phase I testing if the aircraft has that capability?

There’s another area I think we should start looking at as well, and I know this will probably irk some of you, but understand that I am coming at it purely from a safety standpoint: I think waiting a whole year for the first condition inspection is way too long.

I know many of you will argue with me saying, “Vic, I take the cowling down every time I change the oil.” To you, I say, “Wonderful.” I do the same, and you are not the reason for my opinion.

Experimental aviation is not the same as it was a generation or two ago. Many, many owners are not the builder of their aircraft. In the last few years, I have performed condition inspections on many Experimental aircraft that never even had Phase I signed off, have no operating limitations in the aircraft, and in some cases have not even had a condition inspection! One example had been flying for seven years with no Phase I sign-off and had passed through multiple owners! It wasn’t necessarily un-airworthy, but it wasn’t legal either.

Our Experimental aircraft are typically built much lighter than their certified brethren. It doesn’t mean they are any less stout, but we do have to agree that every one of them is custombuilt. There are differences, and in a lot of cases there is not a whole lot of “fleet” information readily available. In my opinion, to go a whole year during the first year without a condition inspection is too long.

I’m not advocating that this condition inspection has to be performed by an A&P because that would add an extra financial burden to the owner. But perhaps we could use the same example as the flight test cards and require a checklist to be performed and documented in the logbook. And I certainly advocate that any Experimental/Amateur-Built aircraft that is sold during the first year should be required to have a condition inspection. It has been my experience that most of the wear areas will show up during the first 100 hours of operation, and I always tell everyone to not “trust” the airplane until you have completed those 100 hours.

So there you have it—a couple of my opinions that I bet might create some controversy, which is not my intent at all. To me it is all about the fun factor, and I think it is much easier to keep the fun factor alive if we are also keeping the safety element front and center.

Dave Martin - November 16, 2009
0
It’s time to install the shiny, expensive boxes in the RV-12. Yes, the avionics package goes in… and it’s not as difficult as it used to be. By Dave Martin.

Bob Fritz - June 24, 2007
0
Ultimate experimenter Paul Lipps has used his own homebuilt, a Lancair 320, as a test bed for his many innovations, which include reflexed flaps, an ultra-long pitot tube for more accurate readings, a solar-powered fan for the cockpit, a cowl scoop for ultra cooling of the magneto, extremely close clearances between the spinner and the prop, and a one-of-a-kind propeller.