In your Ask the DAR feature in the November 2010 issue, Mel Asberry replies to a questioner that the information viewed in the King Schools course was inaccurate and out of date.

You can be assured that all King courses are up-to-date when they are purchased from us-we have a team of folks working constantly to assure that this is so. This is a good reason for customers to purchase a current course from King Schools rather than studying hand-me-down materials.

Best wishes and thanks for the service your magazine provides.

November KITPLANES arrives, and I start my thing from the front to the back. Around the Patch first with Marc Cook then on to Letters. Supported Norman Elfers disappointment. Making electric aircraft was a lot of yada! yada! to fill space on Marc Cooks part. Someplace between the first third to first half, changed to thinking Elfer needed to get a drink and lighten up and that I would get me one after one more letter from Paul Starley on the same article. I am not a Prius fan but forget the drink and chilling out. There is the challenge of lower mpg-anyone get 6.8 for a low yet? I am having problems getting a loaner with that wild look on my face.

As an old foreign-car wrench, I recall many alternator swaps. Foreign alternators equaled big dollars and a Delco would usually fit. You want them to last? Two wires and correct alignment did the job. Want a charge light? Just connect one terminal through a light to ground. Sure, aircraft are different, but determine how one unit is designed to be installed, ask why, then duplicate. The reason industrial couplings exist is to correct small misalignments. Take heed. 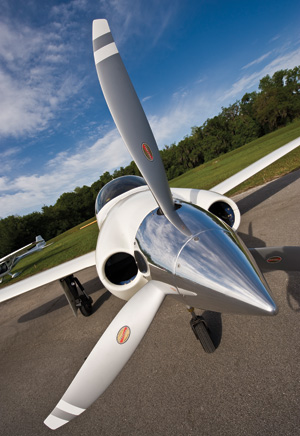 Excellent column on the Lycoming IE2! Lets hope theyve got it right. As for Rozendaals article on the Piston Evolution, the article was not bad, but tell him there are those of us who like the smell of jet fuel. I am not currently flying. I miss it, and the one thing that really makes my palms sweat is a whiff of burning jet fuel.

I am presently five years into the building of my Zenith 601XL. Of course, it was supposed to take 18 months, (according to my pre-purchase calculations), but, hey, whos counting, right? So it was with great interest that I read your article in this months magazine [November 2010] regarding the accident rate for the Zenith line.

I am installing a Lycoming O-235-L2C in my ship, but it appears that the caption on Page 20, indicating a Corvair engine installation, may be wrong. Its actually a Jabiru-powered example.

I read your magazine faithfully and hope one day to be in Completions.

Good catch, Brad. You’re right. Thats a Jabiru under there. One tipoff for those unfamiliar with the cowling configurations is that the Jabiru turns the right way, as in clockwise as viewed from the pilots seat, while the Corvair spins the other way. And speaking of Completions, you may now upload your submission right to our web site. Go to our home page at www.kitplanes.com and look for Completions Click Here in the upper right corner. Follow the steps and you’ll have your Completions posted to our site and automatically placed in the hopper for printing in the magazine.-Ed.

Im wondering about the altitudes in the November 2010 story regarding the Inogen Aviator. The product web site says its only been tested to 13,500 feet.

Thats correct. The company sells primarily into the medical market and extensive testing was required to be sure that the product would work in a pressurized airliner with some margin to spare. According to company representatives, the issue of using the unit above the tested altitude has more to do with heat created within the device than its output capacity. In any case, the Aviator has a built-in safety circuit to shut it down in the event of a malfunction or overheating. As you can see from our testing, the unit was capable of producing enough oxygen to comfortably saturate an adult male above 13,500 feet. Inogen is considering further testing to higher altitudes.-Ed.

Paul Dye - January 17, 2012
0
Paul Dye visits the hallowed halls of flight and reflects on the bond that exists between aviators past and present.