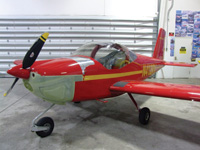 The kit prototype RV-12, which is being licensed as an SLSA, was modified to incorporate Dynon autopilot servos—which will be one of the few options for RV-12 ELSA builders.

Unlike standard Experimental/Amateur-Built aircraft, ELSAs can come from the factory at any level of completion, but restrictions apply. They can’t be rented or used for paid instruction. On the other hand, ELSA owners may take the FAA-approved 16-hour inspection course and perform the annual condition inspection on their ELSAs. Every other company producing an SLSA intends to sell them as ready-to-fly aircraft. Van’s, however, has not committed to building finished SLSAs for sale. Initially, at least, RV-12s will be available only in kit form.

The company anticipated a considerable market for this type of aircraft, considering the push toward lower acquisition, operation and training costs. “We want to be part of that and help the industry grow,” said Ken Krueger, the lead RV-12 designer at Van’s. “Ideally we want to attract a younger pilot population. Van [company founder Dick VanGrunsven] participated in the early ASTM meetings that set the standards for all areas of LSAs.”

For Van’s Aircraft, which has produced Experimental/Amateur-Built category airplane kits for more than 30 years, nearly everything is different. Producing the required SLSA prototype (on which the ELSA kit is based) requires an affidavit of compliance with every part of the ASTM LSA consensus standards. “And there is a lot more than the design and performance specs,” Krueger said. The FAA has provided a matrix of all the standards that an SLSA company must meet.

The FAA’s FAR Part 21 drives the manufacturing standards. Other specs include quality assurance, maintenance and inspections, continued airworthiness, and—because the RV-12 is a kitbuilt aircraft—there is a kit assembly and instructions requirement. The FAA table, Krueger said, contains nine compliance areas including these:

4. Has an adequate production test specification (assuring that the individual aircraft conforms not only with the approved construction but also meets the required flying qualities).

“It’s the same procedure we would do in production test if we were producing the airplane in our own factory,” Krueger said. “Basically, a kitbuilt LSA is the same as a flyaway LSA except it’s not built in our factory. It’s like highly decentralized manufacturing where the kit buyer/builder in effect becomes a subset of the kit manufacturer—a satellite of the kit company. The entire aircraft must be built in accordance with the factory’s procedures.

“The factory supplies the parts, assembly instructions, conformance documents, maintenance manual and pilot’s operating handbook,” Krueger added. “Except for the assembly instructions, these are the same materials that a customer taking delivery of a factory-built aircraft would receive. In this case, the kit maker—Van’s Aircraft—not the builder, is listed on the data plate as the manufacturer. The kit builder agrees in writing to build and then to test in conformity with the kit maker’s instructions.” At the end of the kit-building process, the factory supplies a certification package including placards, flight-test procedures and other production test procedures.

There’s Only One Way

You can’t have it your way unless you want it exactly like the factory’s SLSA. Designated Airworthiness Representatives (DARs) will probably have to receive instruction from the factory to learn the conformance criteria they will apply to the finished airplane, Krueger said.

Any alteration from the basic conformance article will have to be tested and approved by the factory before it can be adopted by the individual builder. For example, the basic RV-12 configuration does not include wheelpants or navigation lights. However, Van’s is working toward making these two features approved options.

The company is also working to approve the new Dynon autopilot system. The RV-12 kit comes with a Dynon D-180 EFIS/engine monitor that includes autopilot software. Once Van’s approves the autopilot option, the RV-12 owner will be able to install servos for a one- or two-axis Dynon autopilot ($750 or $1500 for one or two servos). Wiring and brackets will already be in the airplane. But note that only the approved Dynon autopilot—not some other type or brand—will be legal in an RV-12. Van’s has already gotten assurance that the kit instructions meet the standards.

Another example of the difference between an Experimental/Amateur-Built and an LSA is the required spin testing, which is similar to FAR Part 23 type-certified airplane standards. Well-known test pilot Len Fox was hired to test the RV-12. Unflyable weather and Fox’s schedule delayed completion of the many dozens of documented spins.

Spin recovery depends largely on vertical fin/rudder effectiveness. Thus freezing the design of the empennage required completion of the spin tests. As a result, Van’s decided to make the wing and then the forward fuselage kits available before the empennage kit was ready for production. Here’s a case where LSA requirements overrode the normal tail-first Van’s kit introduction. Now that the empennage design is set, new RV-12 builders will receive the tailcone/empennage kit segment first.

What has Van’s done to accommodate ELSA that would not have been done for a standard Experimental/Amateur-Built (“51% rule”) kit? As noted, 51% builders have complete control of systems selection: engine, propeller, avionics, instruments, everything. With an ELSA, the designer/kit factory controls everything.

The RV-12 design team also emphasized ease of building more than on other Van’s kits. That resulted in punching rivet holes to full size and using aircraft-quality pulled rivets, both of which probably cut hundreds of hours off the build time.

The plans are quite different from the other two-seat kits from Van’s. Most experienced RV builders I have talked with think the RV-12 plans are a considerable improvement, again apt to reduce build time.

The glider-style plug-in wings are also indirectly related to reducing the cost of aircraft ownership—a major LSA goal. The RV-12 is designed to be trailered home, saving hangar expenses. That decision led to a fuselage fuel tank, pitot tube in the spinner and the stabilator—all firsts for a Van’s kit. Stabilators are more effective than stabilizer/elevator combinations, allowing a street-legal horizontal tail width (plus being less complex to build). Other LSA design considerations were a lower level of required flight experience, lower aircraft performance and less training.

Homebuilding to kit company and FAA standards will be a new experience for veteran builders who order the RV-12 package, and watching the entire process including mandatory flight testing should be interesting.

Dave Martin served as editor of this magazine for 17 years and began aviation journalism evaluating ultralights in the early ’80s. A former CFI (airplanes, gliders, instruments), he’s flown more than 160 aircraft types plus 60 ultralights (including a single-seat, no-basket hot air balloon). Now living at a residential airpark in Oregon, he flies his Spacewalker II homebuilt as a Sport Pilot.