When the definition of Light Sport Aircraft (LSA) was being finalized by the volunteer consensus standard committees and the FAA early this decade, we realized that many homebuilt aircraft would meet the requirements. So it was no surprise that RANS Aircraft of Hays, Kansas, was one of the first American companies to qualify some of its long line of kitbuilt aircraft in the LSA category.

Randy Schlitter and his company, which began in 1974 with sail trikes and then recumbent bicycles, was among the first to market a U.S.-built Special Light Sport Aircraft (SLSA) with its ready-to-fly version of the RANS S-7S Courier (reviewed in this column in the August 2007 KITPLANES).

Next came the RANS S-19, which arrives as an Experimental-category, all-metal, low-wing kit designed specifically for the LSA market. Most recently-in December last year-a factory-built S-6 Coyote II, the S-6LS, was approved by the FAA as an SLSA. A month later I flew it with Schlitter and was pleased with the latest version of the Coyote, which dates from 1989 when it began life as an Experimental homebuilt project. The company notes that pilots have amassed hundreds of thousands of Coyote or Coyote II hours in their Experimentals, which are powered by either the 80- or 100-horsepower Rotax 912 engine.

The S-6LS is one of the few SLSAs to offer a choice of landing gear types-trike or tailwheel. For operations into short or rough strips, taildraggers have the advantage. But for pilots without considerable tailwheel flight time, insurance can be a problem thats solved by choosing the tricycle gear option. 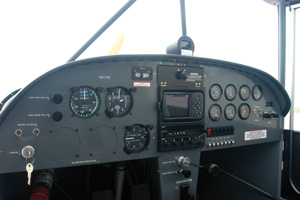 The standard panel is simple and functional. It includes an electric turn coordinator instead of the slip/skid ball seen here.

The S-6LS Coyote II is a tube-and-fabric, strut-braced high-wing design whose forward fuselage is a conventional welded-steel-tubing cockpit cage. The tail cone, however, is aluminum alloy tubing, which helps keep the total empty weight at just 675 pounds. With maximum gross weight set at 1232 pounds, that leaves a useful load of 557 pounds. Two full tanks totaling 18 gallons leave 452 pounds of people and baggage.

The cabin is 45 inches wide and appears even larger because of doors that curve outboard and a huge skylight. Despite ground-adjustable seats, short pilots will need a cushion under them for good visibility on the ground. In the air, however, someone with my low sitting height has 8 to 9 of visibility between the horizon and the cowl. Controls are conventional except that differential ailerons reduce adverse yaw. Dual toebrakes and a parking brake are standard, as is a cockpit heater. On the taildragger model, the tailwheel is full swiveling, and the trike version features direct nosewheel steering-as opposed to the more common free-castering type. Mechanical pitch trim is by a wheel in the center of the lower panel, Cessna style.

The new Coyote II has stamped aluminum ribs tied into the wingspar, resulting in a stiffer, more solid wing than some earlier versions. Up front is a 100-hp Rotax 912S engine that turns a ground-adjustable Sensenich composite propeller. The published glide ratio is a rather flat 9:1, indicating that the airplane flies efficiently. For getting into a short field or over obstacles on final, however, you want a steep glide, and flaps that lower to 40 help considerably in this environment.

Standard avionics include a Garmin GPSMAP 296, SL40 com radio, GTX 320 transponder, a PS Engineering intercom and an ELT. There is an electric turn coordinator. The RANS web site shows a choice of eight paint schemes, and other options are available.

After a preflight and pushing the Coyote II taildragger into an open area, Schlitter and I climbed aboard, latched the large curved doors and cranked the Rotax engine, which started immediately. The airplane had flown earlier in the day, so we skipped the Rotax 912 oil quantity drill that involves pressurizing the crankcase by hand-cranking the prop to force oil into its reservoir.

A brief taxi had us lined up for takeoff on the temporary LSA runway at Sebring Airport in Florida during the annual Light Sport Expo last winter. A few seconds after setting full throttle, we were climbing at more than 1000 fpm, which is what would be expected at near sea level and several hundred pounds under maximum gross weight.

First impressions were that the S-6LS feels like other RANS airplanes: light but not twitchy controls with a good balance of roll, pitch and yaw. My rapid roll check at cruise airspeed from 45 to the other 45 bank yielded about 2.5 seconds each way-a nice, lively LSA roll rate-without the need for full rudder. The stick-free pitch check showed rapid one-cycle damping back to trimmed airspeed and attitude, exceeding LSA pitch stability standards by some margin. As on many Cessnas, there was some play or dead band between up and down commands on the trim wheel. 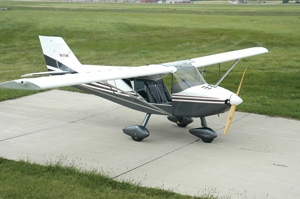 Setting full Rotax power level at 3000 feet yielded 5500 engine rpm (the maximum allowed continuously) and 106 knots indicated airspeed. Thats 6 knots faster than the advertised 100-knot (115-mph) cruise speed, which is based on flying at less than full throttle at low altitude and a lower fuel burn.

We tried 50-mph slow flight without flaps. Once we were trimmed, only light thumb and forefinger pressure were required to control pitch for maneuvering, and the S-6LS felt rock solid. Adding partial power, we nibbled at a departure stall at 41 knots indicated. More power would no doubt have decreased the stall airspeed a bit and increased the stall break pitch down, which was docile at our conditions. Reducing power to idle revealed a clean stall at 39 knots indicated. All of these numbers would be slightly higher at maximum gross weight, on which official performance numbers are based. We tried stalls at all four flap settings: 0, 15, 25 and 40. With flaps at 40, indicated airspeed was 36 knots at the break.

Outside visibility and cockpit comfort in the air are excellent. Those bulging doors and the large skylight minimize blind spots, especially in turns.

Done with standard pilot review tricks, I watched as Schlitter demonstrated maneuvering just short of aerobatics and what he called a really stupid pilot maneuver: a 2-G pull at a high bank angle, causing the airplane to roll to the opposite bank. We had plenty of altitude for these maneuvers, which served not to prove that Schlitter is a madman, but that his design is commendably docile.

For the run back to the airport, we used 5000 rpm as cruise power, and it resulted in 102 knots calibrated airspeed. Slower and in the pattern, Schlitter demonstrated a fairly steep slip, then adding full flaps for the 45, low-altitude turn from base to final for the temporary runway, which is less than 800 feet long. All of this was comfortable.

For someone who is taildragger qualified or would like to be, the tailwheel version of the new S-6LS would make a really nice SLSA. Priced at $92,000 for either the taildragger or the trike, the basic airplane includes everything you need to operate from towered airports, at least during daytime. Night-qualified pilots (people flying as Sport Pilots arent) would want the optional lighting package. The few other options presently include wheelpants (for the trike only), big tires and Dynon flat-panel displays. RANS also offers an autopilot option.

Schlitter says the company is quite busy at present, and there is a five-month wait for the S-6LS. By the way, the company still sells bicycles.

Mel Asberry - October 15, 2019
0
Question: I am upgrading the propeller on my aircraft and was wondering if you...