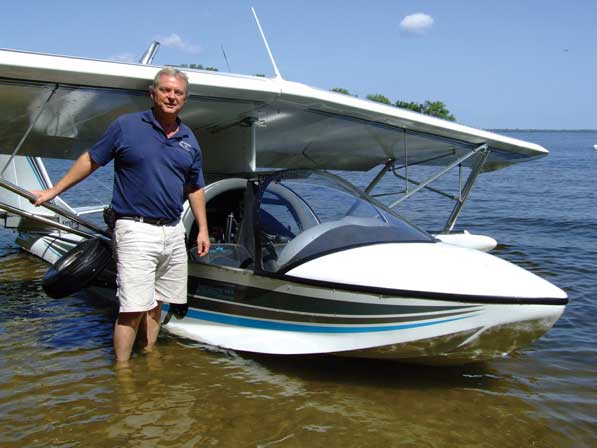 Here’s a safe bet: I’ll wager that you remember your first flight in a seaplane—whether as a passenger or a transitioning pilot—as well as your first solo. For me, vacationing on a lake in New Hampshire in 1975 resulted in two of my first water-flying experiences in one day. My entire family piled into a beautifully restored Waco floatplane for a ride in the morning, and that afternoon my two older children and I waded from our rented beach house for hops in a demonstrator of Armand Revard, the future owner of the Lake Amphibian factory.

My first experience as a seaplane pilot-in-command (PIC) was in the early 1980s aboard a single-seat, twin-engine Laxair ultralight fitted with floats. A year later, I sampled the Advanced Aviation Buccaneer Pluck-A-Gear single-seat ultralight at Sun ‘n Fun. Delightful!

Getting a seaplane rating in a new Cessna 172 floatplane in Washington State followed, and then there were dual and solo flights with Dan Denney in one of his prototype Kitfoxes equipped with inflatable Full Lotus floats on Lake Parker in Florida. On my solo Kitfox flight, I was careful not to land close to the “logs” drifting in the lake. They were self-propelled, scaly and had big teeth.

All of this came to mind last summer as I drove from the noisy, nonstop action of EAA AirVenture/Oshkosh at Wittman Field to the nearby quiet, laid-back Vette Seaplane Base on Lake Winnebago. A cove shelters several dozen anchored seaplanes, and there’s outboard motorboat service to reach them. Outside the cove is a little beach that promises a short wade to and from the amphibs that nudge the sandy bottom.

The object was to check out the new SeaRey. The Sport model is the ready-to-fly Light Sport Aircraft (SLSA) amphibian designed by Progressive Aerodyne and in the FAA approval process as this is written. The company, based in Orlando, is a three-generation family business with 30 years of experience, mostly with ultralight-technology amphibious aircraft kits. The patriarch, Wayne Richter, was a company founder and is the purchasing agent for the kit aircraft parts. Son Kerry is president, in charge of research and development, and chief demo pilot. Years earlier, he and I had flown together in SeaReys, some of which were designed as two-seat ultralight trainers.

Already available is the SeaRey LSX, which is marketed as an Experimental/Amateur-Built kit. The SLSA Sport will be virtually identical. The new SeaReys are the result of engineering analysis and upgrade, and they are stronger, better-flying airplanes. Both are aimed at qualification within the LSA rules so that they may be flown by Sport Pilots. For example, specified SeaRey gross weight is 1370 pounds, well below the 1430 pounds permitted for LSA seaplanes.

More than a year ago, the FAA solved the LSA amphibian problem it caused when somebody in authority determined that although LSA-prohibited “repositionable landing gear” was permitted in amphibian LSAs (which made sense), the repositioning could not occur in the air (which of course was ridiculous). This FAA ruling prohibited a Sport Pilot from launching on a runway and then landing on the water and vice versa. LSA rule writers (volunteers on the ASTM consensus standards committees) petitioned the FAA administrator to overturn the unintended prohibition, and she said she would get it fixed. But the FAA dallied more than two years before the necessary change became effective.

The recent SeaRey enhancements include more comfortable seating with a wider and taller cockpit, adjustable rudder pedals, several instrument panel layouts to choose from, many structural changes and a new lightweight fiberglass hull that is said to be as tough as the original heavier version.

SeaRey LSX kits are produced by Progressive Aerodyne, but the ready-to-fly SeaRey Sport SLSA will be built under license by a new company, SeaRey Sport Aircraft Company LLC, of Florida. 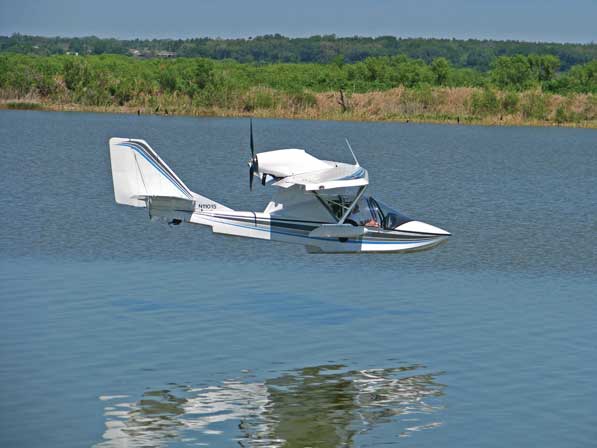 The LSX evolved from long development and production of the design by the company.

Time to Get Our Feet Wet

One of the new SeaReys was on a display stand at the cove, but the other, under Richter’s command, accommodated barefoot sales prospects eager for a turn in the right seat. I removed my shoes and waited in line, then stood in the water holding the SeaRey while he took a quick break. Upon his return, I manned the right seat and noted immediately that the rudder pedals nicely accommodate bare feet. That’s not a coincidence.

Three non-certified Rotax four-stroke engine options are available: the 80-horsepower 912, the 100-hp 912S, and the 115-hp 914. The high-end 914 powers Richter’s demonstrator, and the extra thrust was apparent, particularly on the takeoff run (8 seconds into a breeze of about 5 knots) and climb (up to a steady 1200 fpm at a density altitude of close to 3000 feet). Not apparent were the loss of about 20 pounds useful load and an increase of $12,000 in engine cost—both compared with the 100-hp 912S option.

My most recent previous SeaRey flying was too long ago to compare with the new version, but I was impressed immediately with pleasantly light but solid control response. Near cruise airspeed of 80 knots, roll from 45 one way to the other 45 was about 3 seconds, which compares well with most other airplanes in this weight class.

Light Sport Aircraft are required to exhibit positive pitch stability, which is demonstrated by the plane’s hands-off return to the original trimmed airspeed and attitude in a few cycles. The SeaRey accomplished this stick-free phugoid test in one rapidly damping cycle from a gentle pull up and release. Top speed at 2500 feet MSL appeared quite near the book figure of 85 knots. Slow flight to 50 knots was comfortable.

The surprise was in the stalls department. A partial-power (4100 engine rpm) departure stall required raising the nose more than 30. Keeping the slip/skid ball in the center (a good idea in slow flight) resulted in no stall break, only a mush at 38 knots. A clean power-at-idle approach stall showed similarly benign behavior: increased sink rate and a mush at 32 knots. It’s likely the airspeed indicator shows considerably slower than actual speed in this mode, but it’s obvious that the SeaRey stalls considerably slower than the LSA-required 45-knot maximum.

Following my gentle handling of the airplane, Richter horsed the thing into uncoordinated attitudes and slow airspeeds that would have put many aircraft on their backs or pointed straight down. I don’t recommend this kind of flying unless the pilot is well qualified for unusual attitudes and a test pilot has been in this corner of the flight envelope. But the demo proved that this particular SeaRey could be mishandled without unpleasant consequences.

Several approaches to the water and smooth touchdowns showed off not only Richter’s skill but also the new deep-V hull that is credited with making graceful landings even in relatively high seas.

Altogether, our flight in this SeaRey was a completely positive experience. And my knees stayed dry through the whole flight.

Progressive Aerodyne recommends that builders buy the airframe kits (about $30,000) and wait until the project is nearly finished to order the expensive chunks: engine, propeller and avionics.

Some options chosen for delivery with the kit (rather than later) are far less expensive, especially if they replace standard items. Example: With the kit, the electric rather than mechanical landing gear operation goes for $551 instead of $1251 later. As always, avionics and other options play a large part in total cost. The company says an average SeaRey builder will spend about $60,000 for the LSX.

So far, about 480 SeaReys are in the fleet, and there is an active community of enthusiastic pilots and builders. They will no doubt be joined soon by SeaRey pilots who bought the factory-built SeaRey Sport version.

Dave Martin served as editor of this magazine for 17 years and began aviation journalism evaluating ultralights in the early ’80s. A former CFI (airplanes, gliders, instruments), he’s flown more than 160 aircraft types plus 60 ultralights (including a single-seat, no-basket hot air balloon). Now living at a residential airpark in Oregon, he flies his Spacewalker II homebuilt as a Sport Pilot.