One of the frustrating aspects of the 2004 Light Sport Aircraft (LSA) rule has been its devastating effect on ultralight training. This unintended but predictable outcome has even extended to training for Light Sport pilots. Rules are barriers, and barriers tend to discourage participation.

Now to be certain, there is a segment of the Light Sport world that is somewhat thriving because of the new rules. Ironic to some, it is the segment of higher performance Special Light Sport Aircraft (SLSA). But a close observation of what is happening reveals that the Light Sport rule replaced a taller barrier (private pilot medical requirements) with a shorter, more appropriate barrier for light, two-seat operations. But what has been good for "GA light" has not been necessarily good for the rest of sport aviation. 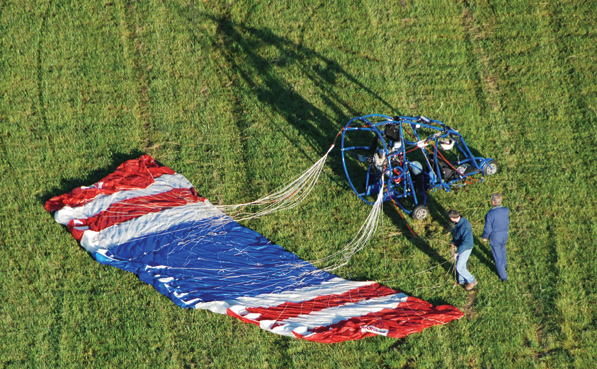 Parachute layout is a critical safety skill that is time intensive and normally provided by a flight instructor for both LSA and ultralight powered parachutes.

For the more "ultralighty looking," two-place airplanes, weight-shift control trikes, powered parachutes, wheeled powered paragliders and for gyroplanes, the rule has actually caused a decline in participation. These aircraft, a category becoming known as "sub-87 knot aircraft" have always had a tougher time attracting quality flight instructors. Creating additional requirements to instructors wanting to share that aspect of flight was bound to thin the ranks.

However, many instructors completed the new FAA pilot and instructor requirements and transitioned their aircraft to Experimental certified aircraft. They continued to train for a couple of years through an FAA transition period that coincided with a dramatic economic downturn. In January 2010, the clock ran out for pilots wanting to continue to train with their transitioned aircraft. After January 2010, instructors were going to have to either purchase new SLSAs or stop training. Many chose to quit. This should not have been necessary, as the FAA had plenty of warning that this could and probably would happen. The Experimental Aircraft Association (EAA) and the United States Ultralight Association (USUA) both warned the FAA that this would be an issue and asked that procedures be put in place for instructors who wanted to continue to train with their own Experimental aircraft. Mind you, no one was asking for a rule change. The regulations already supported the use of such aircraft for flight training (91.319 for those of you who like to look things up for yourselves).

The problem was that the policy makers in Washington hadn’t gotten around to explaining to their local district offices just how to implement the regulation. Well, they had for some categories. But they seemed to consistently ignore LSAs. To train in an instructor-owned Experimental aircraft, instructors need to apply to their local Flight Standards District Office (FSDO) for a letter of deviation authority, lovingly referred to as a LODA. The FAA office couldn’t write the letter because the guidance on what to put in it had to come from Washington. What the FAA just doesn’t seem to understand is that sport instructors operationally have a much more difficult path to follow than the garden variety single-engine land airplane instructors you find at local airports. (Not that those instructors are all working in high cotton, but that’s another story.)

How difficult is this path? Consider this: Sport instructors almost universally have to provide their own aircraft. This includes not only the schools and not just full-time instructors. For example, I’m not aware of any airport rentals for weight-shift control or powered parachute aircraft anywhere in the country. Sport instructors are normally also operating a very seasonal business and are doing so part time. They have a tougher time getting mechanics and often have to personally get the training and repairman certifications to support their operation. After all that, asking instructors to spend an additional $20,000 to $100,000 to continue doing what they are doing for no purpose other than meeting another government unfunded mandate was not realistic in these economic times.

Dual time in a Cessna 172 isn’t going to completely prepare a pilot to fly one of these.

The background on this is most of the bad news. The good news is that the FAA finally published what it should have published two years ago. There is a new LODA order that will allow many Light Sport instructors to resume training with their own Experimental aircraft. The two-year delay has caused problems and the LODA is by no means perfect, but it is a significant step in the right direction. The document is in Change 155 (no kidding) to 8900.1, the Flight Standards Information Management System. If you are interested in applying for a LODA, look for volume 3, chapter 11, "Use of Aircraft Issued Experimental Airworthiness Certificates in Flight Instruction for Compensation or Hire."

A big problem with past versions of this document is that they prohibited primary training. The FAA only wanted to allow Experimental aircraft to be used for transition training. Primary training means that the instructor is providing flight instruction toward a certificate or a rating. Transition training means that a student already has a rating (airplane, single engine land) and wants to get checked out in a new make and model of aircraft in that same category.

This prohibition did nothing to help Sport Pilot CFIs or students who want to fly the sub-87 knot category of aircraft such as powered parachute and weight-shift control trikes. That seems to (in part) finally be addressed in this version. 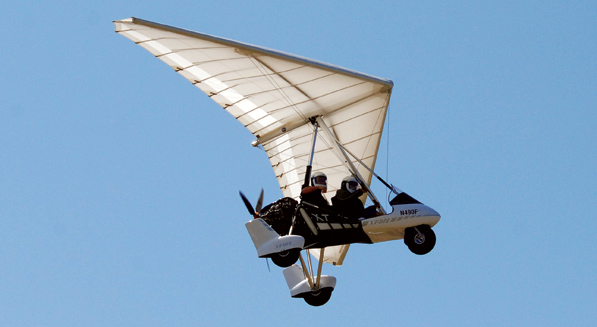 Do you want to become a trike instructor? If you do, an aircraft purchase is in your future because the local airport doesn’t have one of these to rent.

Let’s talk about what a LODA can be issued for. I won’t review jet training, instrument competency and formation training, even though they are covered in the LODA. Let’s stick with the light stuff.

Specific Make and Model: The FAA still looks at this as the primary use of the LODA. And it is important. The warbird community as well as the rest of the Experimental aircraft community needs to be able to train pilots on specific aircraft and systems that just aren’t offered in standard certificated aircraft. This certainly includes a lot of the lighter aircraft.

Ultralight Vehicles: A LODA can specifically be issued for "Training for the operation of ultralight vehicles only when conducted in low-mass, high-drag aircraft with an empty weight less than 500 pounds and a maximum speed in level flight with maximum continuous power (VH) less than 87 Knots Calibrated Airspeed (KCAS)."

Flight Reviews: The FAA allows for "Training for a flight review in a specific make and model of Experimental aircraft." This is great for those who are familiar with a certain model of aircraft and would feel far more comfortable doing their flight review in that model. Obviously, it is not primary training, but it does offer an important opportunity for some. 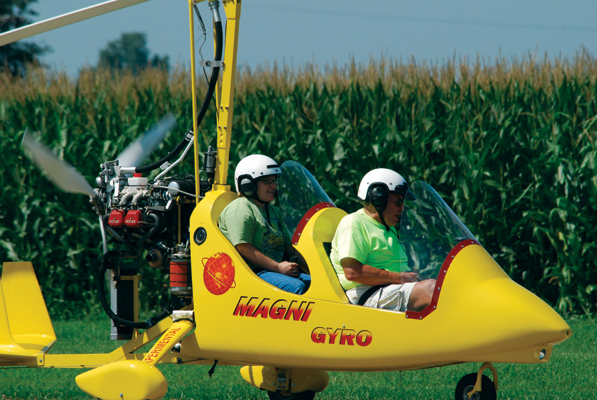 Greg Gremminger has worked hard to promote training and safety in gyroplanes.

Gyroplanes: Gyroplane CFIs are the big winners on this one. The language here is simple and all-encompassing, and therefore covers all aspects of gyroplane training. "Training for a rotorcraft gyroplane rating or certificate." It doesn’t get much more clear than that. This is an issue that Greg Gremminger, a well-known advocate of gyroplane training, and David Oord from the EAA have been working on for a while. Thanks to both of those individuals for working to make it happen.

Sport Pilot Certificate or Operating Privilege: The language on this one is as complicated as the language for gyroplanes is simple. It is long enough that we’ll give it its own paragraph:

"Training for a Sport Pilot Certificate or operating privilege. Flight training leading toward the issuance of a Sport Pilot Certificate or LSA operating privilege is to be conducted in an aircraft issued an experimental certificate under 21.191(i)(1). A LODA should only be issued if an aircraft with other than an experimental certificate under 21.191(i)(1) is not available for the conduct of this training in the Flight Standard District Office’s (FSDO) geographic area. The aircraft used to provide the training must have been owned by the person providing the training prior to January 31, 2010 and that person must have been appropriately certificated or otherwise authorized to provide that training prior to January 31, 2010. LODAs for persons conducting this training will have a maximum duration of 24 months and will be limited to the geographic area of the FSDO’s responsibility. FSDO’s may terminate a LODA for sport pilot training at its discretion."

The gerrymandered language on this should be embarrassing to the FAA. While it does provide for primary training toward a Sport Pilot certificate, it appears the FAA is still more interested in SLSA sales than in providing a cadre of working instructors. Here’s what the FAA seems to be saying. You can use an aircraft for Sport Pilot training only if:

1) It is certified as an Experimental Light Sport Aircraft (no amateur-built aircraft).

2) It has to have been transitioned from ultralight status. (That means only aircraft at least three years old at present.)

3) There aren’t any SLSA aircraft in your FSDO region. This is micromanaging at its worst. In other words, if you are in the Montana FSDO area-anywhere in the 147,042 square miles of it-and just one instructor has an SLSA, then you can’t get a LODA. Even if the person barely trains or has little experience. This rule doesn’t deal well with either the size of FSDO areas or the borders between them.

4) The aircraft was used for certified flight instruction before January 31, 2010. This restriction would almost be understandable if the order had been published in 2009 as was originally requested. As it is, many instructors sold their old two-place trainers and don’t have access to them anymore. And of course this kind of arbitrary restriction prevents new instructors from getting involved in the sport unless they want to spend a lot of money to get started. While the old prohibition on training guaranteed the quick decline of the sport, this rule will guarantee only a slightly slower decline.

As I pointed out at the beginning of this column, the FAA has a lot of work to do on this issue. The irony is that one of its high priorities is the safety of Experimental and Light Sport Aircraft. In light of that, it should do everything possible to encourage and assist flight instructors in providing good instruction, as this is the cornerstone of safety. It seems that the industry is leading the way in safety on this issue by trying to encourage the FAA to do the right thing.