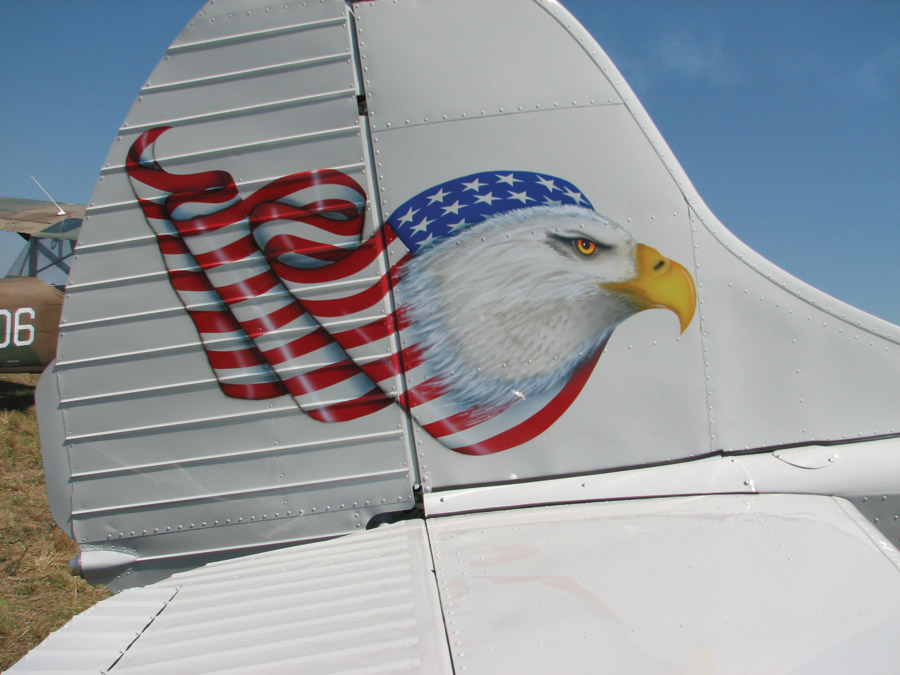 This aircraft has both a fixed rudder tab and a pilot-controlled elevator trim tab.

Tabs can be used on any of the primary flight control surfaces (ailerons, rudders, elevators). They are used both for trimming and to tailor control forces.

A fixed tab is often used to adjust the control position at which the pilot will feel zero force on the stick or rudder pedals. Many light airplanes have fixed sheet metal tabs on the rudder and/or ailerons. These tabs can be adjusted on the ground by bending them in order to compensate for asymmetries in the airplane. The tabs are set to adjust the neutral position of the controls so the pilot does not have to hold a continuous control force in cruise.

On some simple airplanes that fly at the same airspeed most of the time and have low stick forces, a fixed tab may also prove adequate for pitch trim. Such a fixed tab is used to set the trim for the one airspeed at which the airplane flies most of the time. To fly at any other airspeed, the pilot must hold a continuous pressure on the stick.

For most airplanes, a fixed tab is inadequate for pitch trim. The airplane must fly over a wide range of airspeeds, altitudes, and center-of-gravity positions, all of which change the elevator setting to trim the airplane. The pilot needs a controllable trim tab to enable him to trim out stick forces over the entire flight regime of the airplane.

Adjustable rudder tabs are less common on single-engine airplanes, but they are common on twins. In an engine-out situation, a significant continuous rudder deflection is needed to trim out the yawing moment caused by the asymmetric thrust of the operating engine. Having an adjustable tab to reduce or eliminate the pedal force needed to do this greatly reduces the pilot’s workload in keeping the airplane under control during the engine-out emergency.

Tabs are a very common form of trim system. They are aerodynamically effective, relatively simple mechanically, and can be installed on virtually all types of elevators. Another advantage of tabs is that the effectiveness of the tab can be increased relatively easily by making the tab larger, without making major revisions to the rest of the airframe.

On a tab used exclusively for trim, the tab-control linkage adjusts the position of the tab relative to the main control surface and keeps that relative deflection constant as the main surface moves.

The linkage controlling the tab can also be designed so the tab moves relative to the main surface, as the main surface deflection changes. A tab like this is called a “geared” tab, and it can also be used to tailor control feel by modifying the hinge moment of the control surface.

The most common example of this is the anti-servo tab on the trailing edge of most all-moving horizontal tails. Typically, this tab extends over the full span of the tail and is about 10 to 15% chord wide.

The restoring tendency of the tail-plus-tab combination is determined by the size and gearing of the tab, which controls the ratio of tab deflection to tail deflection. Increasing the tab-deflection-to-tail-deflection ratio will increase the restoring tendency of the tail, making the control feel heavier. Increasing the size of the tab will have the same effect. Gearing can be adjusted to tailor control forces of the airplane to a desirable level.

The anti-servo tab can also serve as a trim tab. If the linkage that determines tab deflection is controllable by the pilot, the neutral position of the tab can be adjusted in flight to adjust the floating deflection of the entire tail.

The anti-servo tab also acts like a flap that increases the maximum lift coefficient of the tail. When the tail is deflected, the sense of the deflection of the anti-servo tab is in the same direction as the tail deflection. Thus, the tab acts much like a conventional elevator and adds to the control power of the all-moving tail. Like all trailing-edge tabs, an anti-servo tab on an all-moving tail can be a major cause of flutter. It is extremely important that there be no slop or play in the linkage that controls the tab deflection.

Anti-servo tabs are most commonly used on all-moving tails, but they have also been used on airplanes with conventional tailplanes and elevators. Later models of the Grumman-American AA-1 (Yankee, Lynx, Trainer, Traveler) had anti-servo tabs to reduce pitch sensitivity.

One danger with servo tabs is that if the tab is too powerful, it may overpower the surface’s normal restoring tendency and drive the control to the stop. Such a condition, where the control surface/tab combination is unstable, is dangerous and can render the airplane uncontrollable. The use of a servo tab should be approached very carefully, and the tab movement should be small to start with. It can gradually be increased to lighten control forces until the desired level is reached.

In extreme cases, for very large control surfaces, it is possible to hook the pilot’s controls to the tab rather than to the main surface. The pilot’s controls fly the tab, and the tab controls the deflection of the main surface aerodynamically. This system was used on several very large aircraft in the 1940 to 1950 era before powered hydraulic controls were perfected. The tab systems allowed pilots to fly airplanes that had control surfaces too large to be deflected by pilot strength alone.

One major concern with trim tabs is flutter. It is vital that the linkage controlling the tab be stiff and free of slop. Trim tabs are quite susceptible to flutter if not rigidly constrained by the linkage, and a fluttering tab can drive a flutter of the whole surface, with catastrophic results.

Two fatal accidents to Reno Unlimited racers were caused by flutter. In one, a tab might have been the cause, and in a second, the tab was definitively identified as the cause.

In 1999, Gary Levitz was killed when Miss Ashley, a Griffon-powered P-51 with Learjet wings and horizontal tail disintegrated in flight. The NTSB found the probable cause to be rudder flutter. While the NTSB report said the cause of the flutter could not be determined, it did note that the rudder was shredded in the area of the trim tab, which suggests that tab flutter might have played a part.

In 2011 Jimmy Leeward and 11 spectators were killed when Galloping Ghost crashed. The NTSB report on the accident finds the probable cause to be:

“The reduced stiffness of the elevator trim tab system that allowed aerodynamic flutter to occur at racing speeds. The reduced stiffness was a result of deteriorated locknut inserts that allowed the trim tab attachment screws to become loose and to initiate fatigue cracking in one screw sometime before the accident flight. Aerodynamic flutter of the trim tabs resulted in a failure of the left trim tab link assembly, elevator movement, high flight loads, and a loss of control.”

It is extremely important that the linkage controlling the tab be tight and free of slop. The tab should be held rigidly so that its deflection relative to the main control surface cannot change unless the pilot commands a change by moving the tab linkage. A few degrees of “flapping” freedom in a tab linkage can be enough to cause serious flutter problems. Loose and sloppy hinges and anchoring the tab hinges to relatively flexible structure can also give the tab the freedom it needs to start a destructive flutter.

The mass properties of the tab are also important. Tabs are usually not mass balanced. This is because the tab linkages and hinges are designed to be tight enough so the position of the tab relative to the elevator is always rigidly constrained. Unfortunately, linkages and hinges are not perfect, and most have a small amount of free play. If the tab is relatively light and the free play is small, all will be well. In some instances, particularly for large, powerful tabs, mass balancing of the tab may be necessary to prevent tab/elevator flutter.

Metal Magic: How To Back Rivet

Kitplanes - August 27, 2021
1
Master aircraft builder Paul Dye demonstrates how to "back rivet" metal for a clean,...