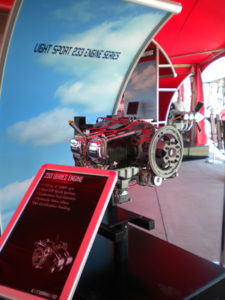 Mike Kraft of Lycoming Engines appeared at a press conference Monday at AirVenture, and said he sees signs of a recovery in the aviation market.

We are coming out of the recession in good shape, Kraft said. At present there are more than 100 Lycoming service centers in the U.S. and worldwide, which means support will be there when products such as the 233 series and IE2 engines need maintenance. “The support base has to be ahead of the product release,” Kraft said.

General focus this year has been on the four-cylinder engines, and an IO-233-equipped Kitfox Super Sport is on display at the Lycoming tent. Kraft said the company is working with a number of OEMs and there are more to come. Presently, Renegade, Tecnam, Kitfox, American Legend and Brumby of Australia have OEM agreements with the company.

The company also has three IO-360 engines on a dirigible airship appearing at the show, and to kick off AirVenture in grand style, the company’s Thunderbolt engine is in full red-white-and-blue “bling.” Lycoming engines are also flying in Northrop Grumman’s “pilot-optional” Firebirds.

Kraft also touched on his work with a group trying to find a suitable transition from leaded to unleaded fuels, and says they are looking for any solution that will “advance aviation for the full fleet.”

When asked about the future of the company’s TIO-540-AE2A series engines by an anxious member of the audience, Kraft reassured the attendees that the engine will still be flying in another 20 years. “There’s no technological reason why there can’t be an unleaded solution for that engine,” he said. “The question is how you get it to market.”

Is the alternative fuel problem too complex to solve? Kraft says aviation has always been about solving complicated problems. “It’s certainly not intractable, but it has to be done piece by piece. Everyone in the supply chain is in the same room, and you can’t underestimate the power of that.”

Vic Syracuse - May 8, 2020
1
Jam nuts serve a purpose and that is to prevent actuating arms from becoming...