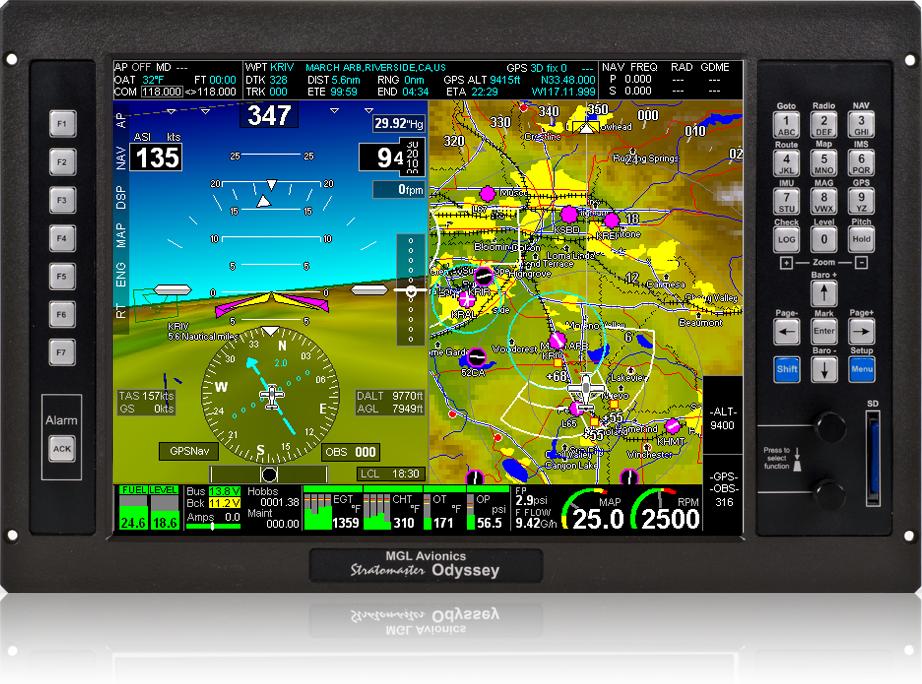 This just in from MGL Avionics:

MGL Avionics is pleased to announce a major step that represents the culmination of over 10 years of avionics development by the company. The Generation 2 versions of the popular Odyssey (10.4″) and Voyager (8.4″) EFIS units are now shipping.

The Generation 2 Odyssey and Voyager include an upgraded internal main processor that allows the inclusion of textured, shaded 3D terrain, as well as the display of transparencies on the screen for better situational awareness. Also, the improved processor capabilities result in better functionality in many areas, including menu navigation, general operations as well as the following primary functions:

The other major component of the Generation 2 upgrade is the inclusion of external Video Inputs and Outputs. The Output sends the screen image to an external VGA display so that builders of tandem aircraft, for example, can put a repeater screen in the passenger instrument panel for just the cost of an aftermarket VGA LCD screen. And, there are 4 External Video Inputs added, so that pilots can connect external cameras for display on the screen, such as taxi-cameras for taildraggers, or FLIR sensors.

The basic case, bezel and display remain unchanged with Gen 2.

Rainier Lamers, CEO and Chief Design Engineer of MGL Avionics issued the following statement: “The continuing development of the Odyssey/Voyager platform has produced the first major hardware upgrade for this popular EFIS. We have taken advantage of new technology as it has become available and this has allowed us to push the functionality of our EFIS system to levels not thought possible at affordable and fair prices. MGL Avionics is committed to providing the World’s best EFIS system at the best price. However, EFIS development is never complete and the buzzword is ‘new.’ With the upgrade path from the Gen 1 to the Gen 2 we have proven that our systems are not only software upgradable but can follow a hardware upgrade path as well. This has never been done before and provides peace of mind to the EFIS owner that his investment will not be outdated soon due to the rapid development of technology.”

The internal modular system of the EFIS allows the internal processor to be replaced very easily. And, since the Gen 2 upgrade is only an internal processor and external video input/output connector upgrade, existing Generation 1 Odyssey and Voyager owners can upgrade their EFISs to Gen 2 for under $500. The upgrade is handled at MGL Avionics in California, for North American customers.

Complete Odyssey/Voyager EFIS packages, including all AHRS and engine sensors, sell for under $6200.

The Generation 2 simulator is available for download from www.mglavionics.com to allow familiarization with the EFIS before and after purchase.

Dave Prizio - January 18, 2013
0
In light of additional research and input from manufacturers, Dave Prizio revises some of his previous recommendations on testing your fuel system.