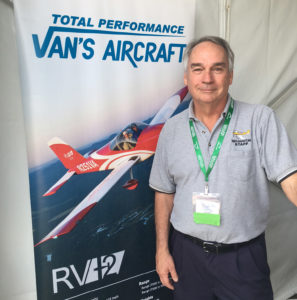 Mitch Lock, one-time east coast representative for Van’s aircraft, has been chosen as the successor to retiring president Scott Risan. Lock has ben an RV builder for many years, with his most recent builds being an RV-10, RV-12, and RV-14. All were built from the initially released kits of each model, and Lock used them as demonstrators at east coast fly-ins where he represented the company, which is based in Portland, Oregon.  Lock’s background is an electrical engineer, and he retired from owning an electrical firm several years ago.

In an exclusive interview with Kitplanes magazine at the Sun ‘n Fun Fly-in, Lock stated that it is his goal to make Van’s upper management more visible to customers and the flying public by attending as many events as he can. He will be relocating from his Maryland home to the Portland, Oregon area in the near future, and stated the they are looking at possible replacements for the east coast representative position.