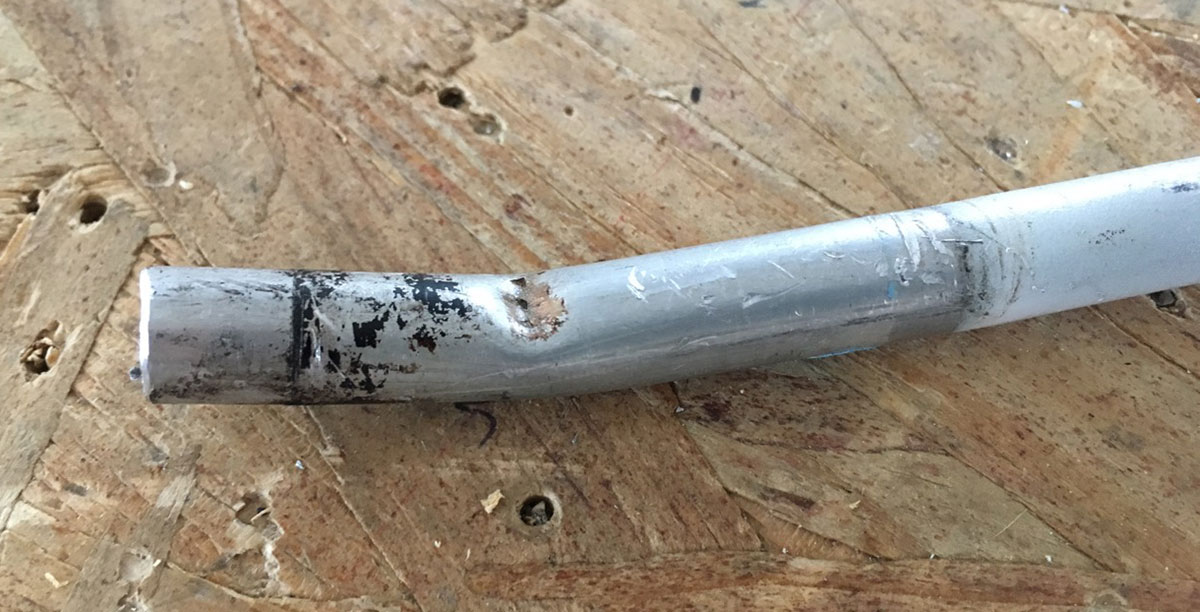 I am often amazed at just how big our margins can be in aviation. Engineering margins, that is – operational margins are as big (or as small) as pilots want to make them. Here is a good case in point. This is the right tank-to-selector fuel line off of a very early two-seat RV. It’s been flying for probably well over 30 years. See that crimp? Look more closely – inside the crimp are three very sharp depressions that look like they were made with teeth from a tool of some sort. If you look inside the end of the tube with a bright light, you can actually see each individual tooth mark!

The kink/dent alone is far beyond the allowable in the mechanic’s bible, AC43.13. The tooth marks are icing on the cake! The fact that the line was painted the same color as the inside of the wing root fairing tells me this was original, so its been flying a VERY long time in this condition. How it has been missed all these years – by the builder, the initial inspector, and each subsequent condition inspector is hard to imagine – until I think about things I have found that I have missed as well. Something about casting the first stone is not going to let me get indignant and cast blame.

But think about the margins this represents. Of course, there is virtually no pressure in this line – maybe six inches or a foot of water column. So long as it is intact, with no leak path, it would probably hold forever. Think about that when you are measuring nicks and dents to the closest thousanth. Yes, please keep your standards high, and keep measuring and polishing. But if you’re keeping up good overall standards, don’t lose sleep over worrying about if your airplane is strong enough – it most likely was designed by an engineer who knew how messy “the field” can be. And if you’re one of the folks that worry about those “soft” aluminum fuel lines that are easy to build but maybe not be as strong as the rigid, very hard lines many substitute, well… this should help you get that extra sleep as well.

I obviously wasn’t going to sign this one off, and the owner was happy when I showed him just how easy this line was going to be to remove, duplicate, and replace. I handed him my big roll of tubing, and he had the thing finished pretty quickly.

Like they say – let’s let the designer have the margin, and do our best not to dip into their pot of “extra.”

Dave Prizio - May 17, 2013
0
How to sort through the maze of instrumentation choices.