There’s no doubt that the first flight of an amateur-built aircraft can be quite stressful, both on the builder and the family. Coming in at a close second seems to be the airworthiness inspection. At least that is my sense from the many comments I hear and also see on the various builder forums. Seeing as these are first-time builders, I can understand all of the fuss. We were all first-time builders at one time and probably just as nervous about that inspection. However, there are a lot more resources available today, and I would think it is a great thing to have someone else perform a very thorough inspection of the project before you go fly it. Yet I see comments from builders who “shop” DARs and FAA inspectors who really only focus on the paperwork. Having been a DAR for over 10 years now and having licensed hundreds of airplanes, I’ve only had to issue two denials, and all parties agreed we needed to do that. One had to do with an engine of unknown age and origin, and the other was really misrepresented as a new airplane, yet it had been flying for three years and 300 hours. 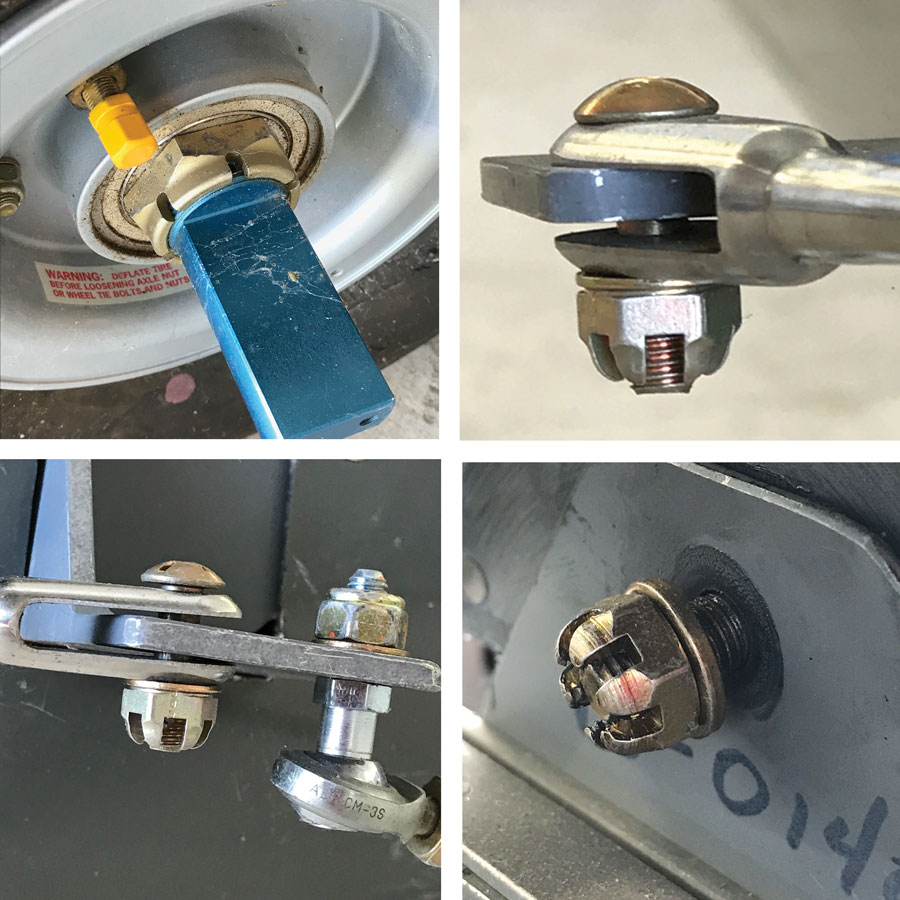 Yikes! Every one of these missing cotter keys is in a critical location, and each is exposed for easy checking except for the spar bolt, which is quite important in its own right. The axle nut coming loose can cause some serious ground-control problems, as well as the rudder cable coming loose. Can you imagine the surprise on the first landing in a taildragger without directional steering?

It seems to me that some builders are wary of someone else finding something wrong with their airplane. So what? I have found lots of things wrong, some very serious, and others just nits. But guess what—they were all fixable and everyone is much relieved. As a matter of fact, I get quite a few requests for airworthiness inspections outside of my geographical territory due to my thoroughness. Nevertheless, my wife sometimes finds things wrong with my own airplane, as she does poke her nose around whenever I am doing maintenance on them. Does it bother me? Well, truth be told, it annoys me that I missed it, but I am thankful that she looks around, and I can get over the ego issue quite easily. 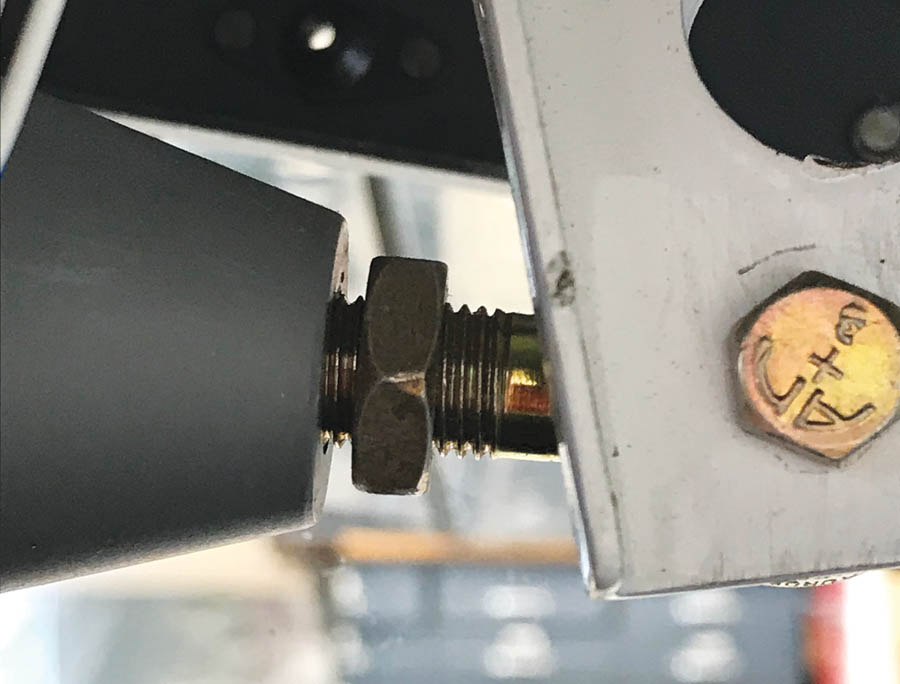 Here are some of the most common issues I find on the airworthiness inspection. This is meant to help you look more closely at the usual problem areas, not to show you what I can find (or any other DAR for that matter). I am not going to go into any paperwork issues in this column as I have done that before, and one of my cowriters (Dave Prizio) has also already done that for you. The pictures should speak more to the point than a lot of words in print, so I’ve included quite a few this time. 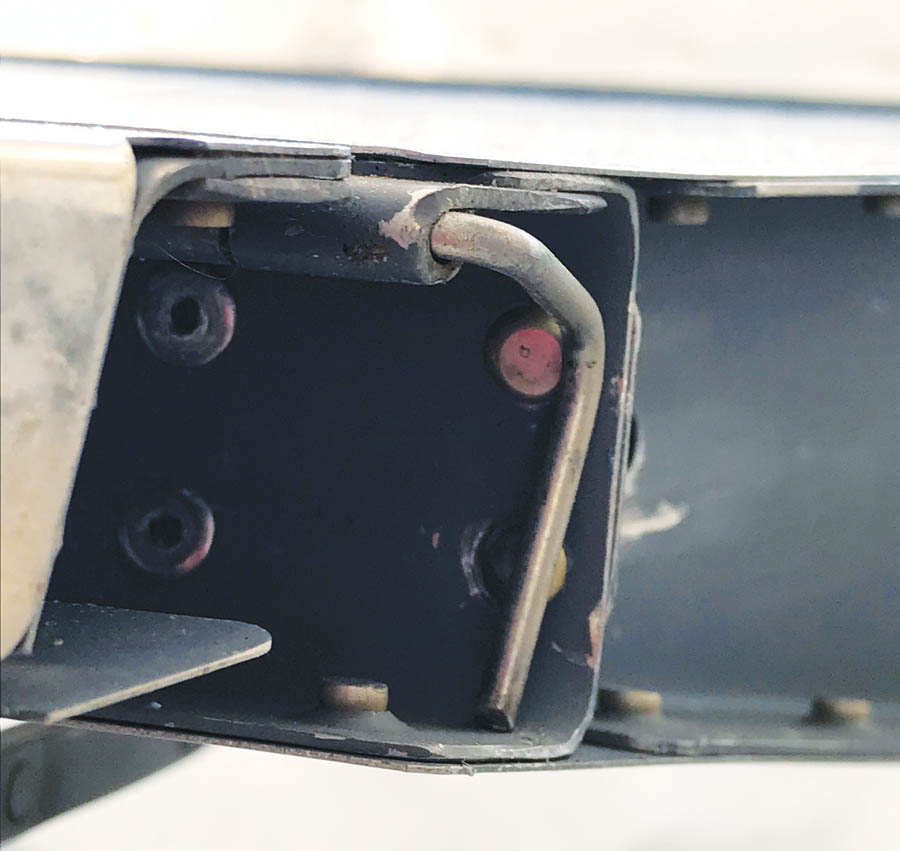 This elevator trim tab pin is supposed to be secured with safety wire. If it should move out, it can interfere with rudder deflection.

When I arrive at the location, once the pleasantries are completed, my eyeballs are looking for anything out of the ordinary as I am approaching the airplane. Over the years I have noticed nav lights on the wrong wingtips (red on the right side as an example) and missing cotter keys from axle nuts. Both are certainly easy to do, but the builders are quite surprised when I point them out. Next my eyes are looking toward the engine compartment, where it is very common to find things that haven’t been tightened up. Common things here are loose exhaust nuts (which can create a very hazardous condition if they come completely off, allowing hot gases to reach the fiberglass cowling and possibly cause a fire) and clamps that haven’t been tightened. 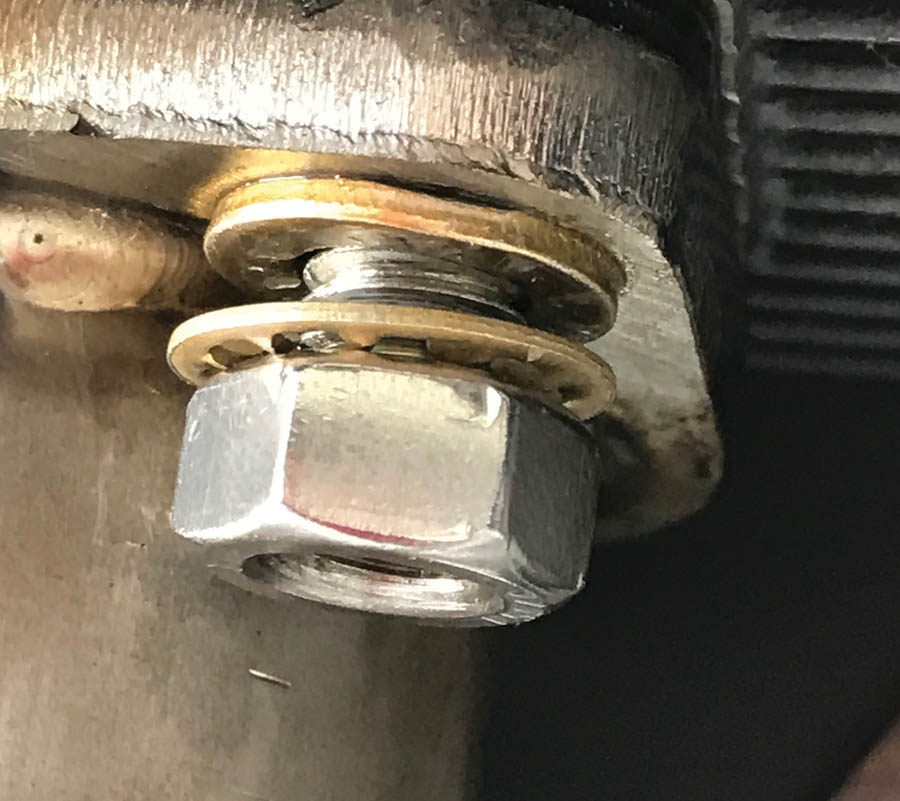 All of the exhaust nuts were loose on this airplane, and the engine had already been ground run. Luckily it all stayed together.

Hoses are another very problematic area, again mostly with loose connections. I like to see the use of Torque Seal placed on the nut after it has been properly torqued. I always make an attempt to loosen the fitting by hand and have been surprised by how many loose ones I find! What’s even worse is when I find a loose one with Torque Seal on it! Then I no longer trust any fitting or nut on the airplane and check all of them. Fuel pump fittings and inverted oil systems seem to be the most notorious. I assume it is because they are in awkward locations, but since they are both so critical, it pays to take the time here and do them right. 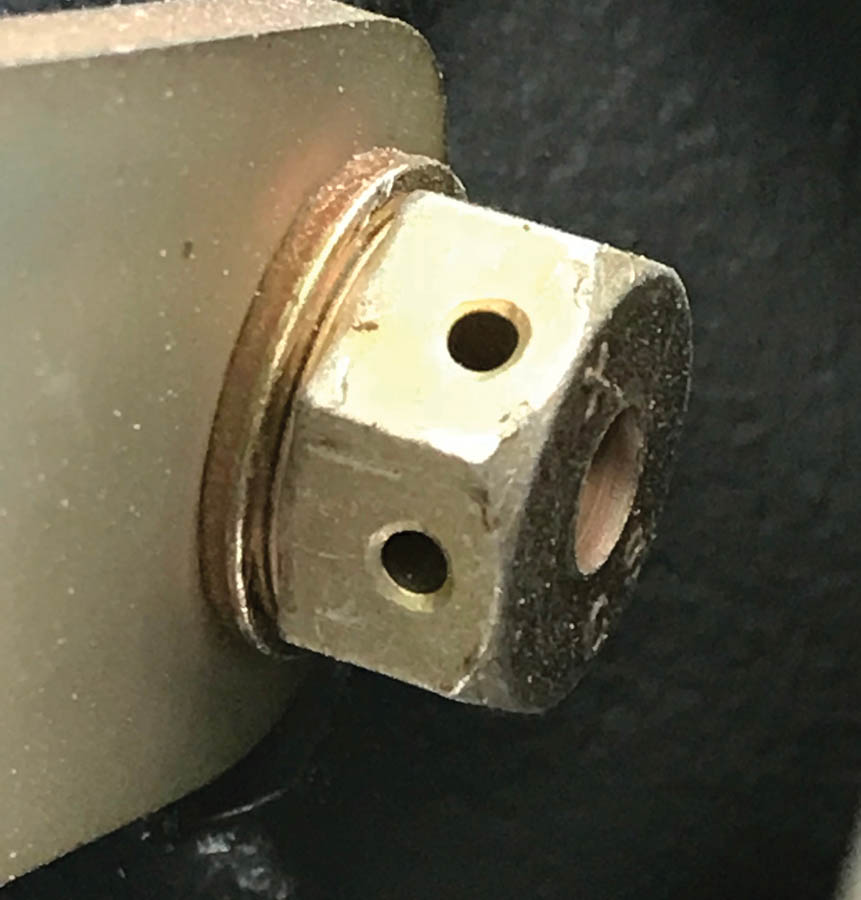 Drilled-head bolts are just as critical as castellated nuts. They need to be secured with safety wire to prevent rotation. They do not have lightening holes!

Drilled-head bolts and castellated nuts are usually there for a reason, and each of them requires safety wire or a cotter key, respectively. Most of them are in critical locations such as control systems, where a missing bolt connection could be catastrophic. Again, some of them can be in hard-to-reach and even hard-to-see locations. I know I have written enough about jam nuts, in this and other publications, that you would think the problem would be eradicated by now. I’m convinced it is some kind of undiscovered plague! 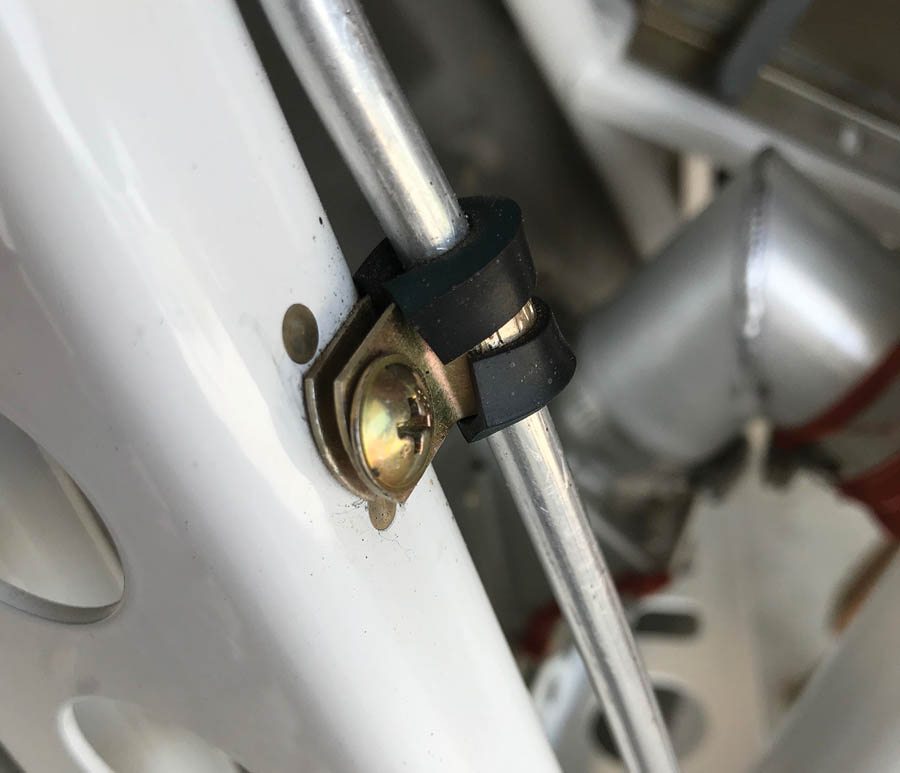 The loose brake line bolt is not serious, but it is supposed to be tight.

While many kits and builders are making more use of flexible lines, there is a weight penalty associated with them and sometimes a life-limit on them as well. Not so with aluminum lines. Once installed they should be good forever. However, flaring them properly takes some patience, and I have discovered many leaks due to over-torqued aluminum flare fittings. One also needs to be careful not to nick or scratch the aluminum too deeply, or else the tube will be prone to cracking. 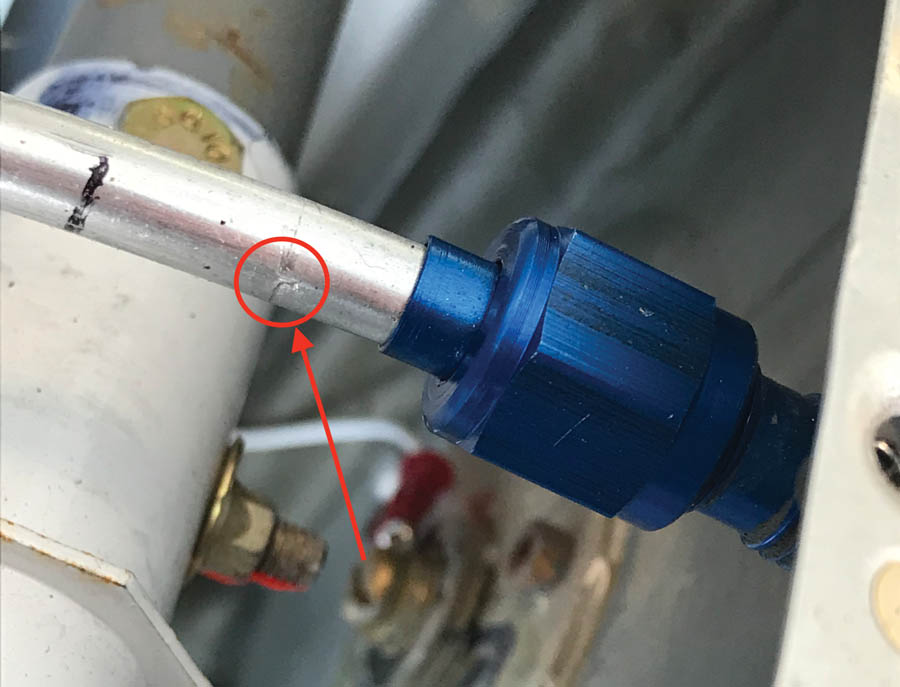 Be careful not to nick or scratch aluminum tubes too deeply, or they may be prone to cracking.

Unsecured wiring has the potential to cause intermittent problems down the road as the wiring can eventually break from the vibrations. Another real safety aspect is the potential for unsecured wiring to chafe and cause shorts and sparks. Allegedly, the in-flight explosion and crash of a 747 was eventually attributed to chafing wires in the fuel tank. 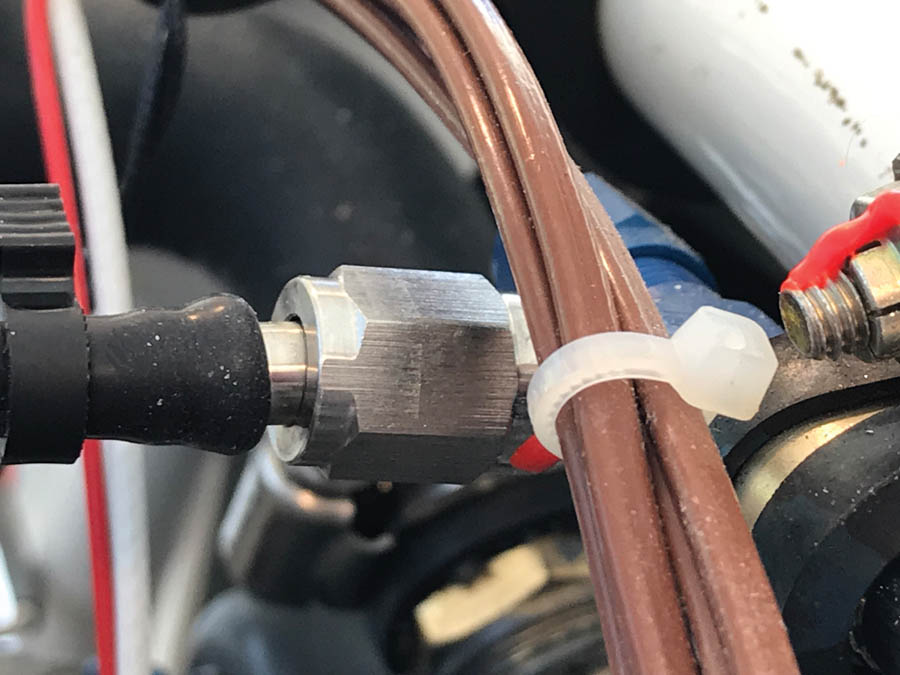 Use the proper fitting appropriate to the hose and function (high pressure/low pressure). Some hoses require clamps, others may require the hose to be pushed on the barb an appropriate distance in order to be secure.

Another pet peeve of mind has to do with the control sticks. I see way too many installations where there is interference to the control stick from the panel or engine controls. This is absolutely not allowed. If you are going to extend instrument panels to handle all of the latest and largest glass screens and then put on stick grips with buttons to control everything, you have to start shortening the sticks. You really have to be careful here, and too much shortening can affect the control feel, so pay attention when you are building to not go too far outside of the designer’s specs with regards to panel height. It is also a requirement that the cockpit controls are labeled. I can’t tell you how many airplanes I have licensed or flown and had to ask what the various buttons control.

Do make certain that the panel and/or engine controls do not interfere with the stick deflections. Oh yeah, while you’re at it, label the controls!

By the way, all of the pictures you are looking at in this column came from one airplane. That’s right, one airplane. I did commend the person for asking me to come and perform the inspection, as it was a 3.5-hour one-way trip in the RV-10. He knew he wanted someone to look it over closely. Kudos for doing that. However, no points for missing the obvious stuff. 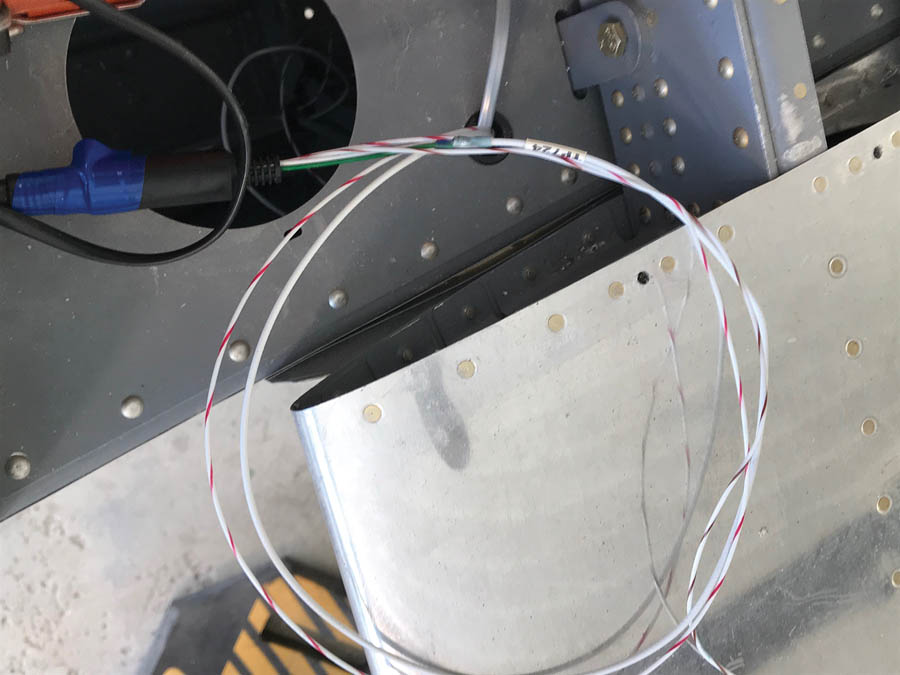 No points for unsecured wiring. Most definitely they will eventually cause intermittent problems from the wiring breaking due to vibration. They also have the potential to cause much more serious issues, such as shorts or sparking in current-carrying wires. 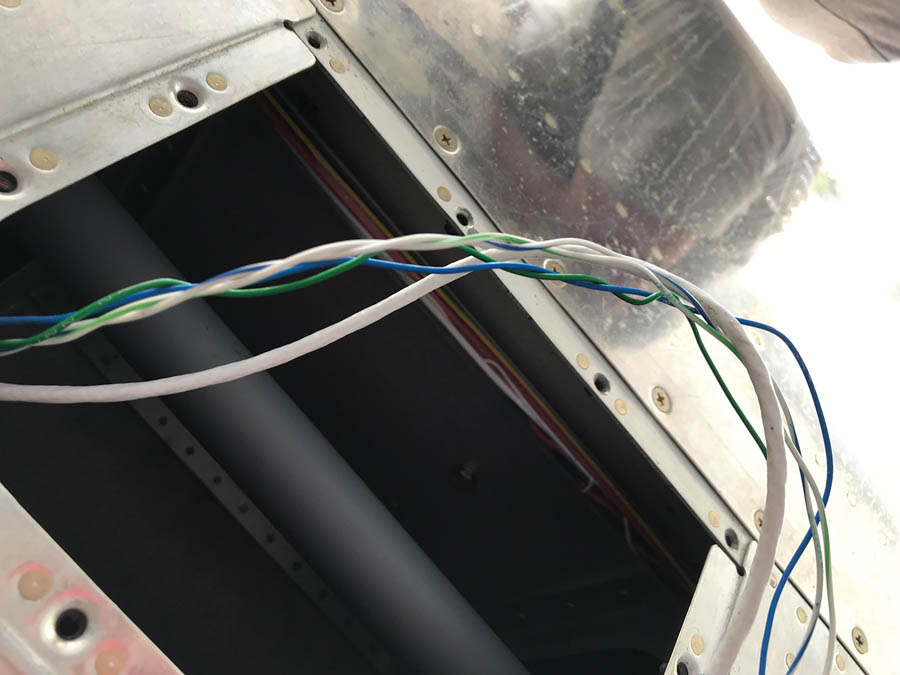 Take the time to put the tools away and thoroughly go over your airplane, making a list of everything you find. Then go back and fix it. It’s too easy to get distracted by fixing everything as you find it. At least try it. You could even practice playing DAR. So what if you find some things you missed. We all do.

Make it fun. I know I try to make the inspection fun and relaxing for everyone. It’s all supposed to be fun.

Mel Asberry - September 14, 2010
0
DAR Mel Asberry clears up airspace restrictions for homebuilts during flight testing and discusses how the original builder of a homebuilt design remains the builder unless the airworthiness certificate is surrendered, which has implications for reselling an aircraft. 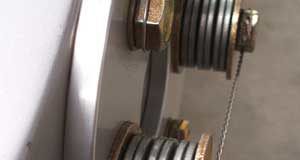