This January, EAA Chapter 1240 will be bringing the “One Week Wonder” aircraft, built at Air Venture 2018, to the Sebring’s Sport Aviation Expo.
Look for the “One Week Wonder” at the EAA tent located on the South side, adjacent to the Workshops tent. This is a wonderful example of the great possibilities that exist – from ground speed zero to 140!

The local EAA Chapter will also be featuring its own build project – a Lockwood “Air Cam”, being constructed by the chapter members on behalf of and with the mentorship of Dr. Story Musgrave, astronaut. 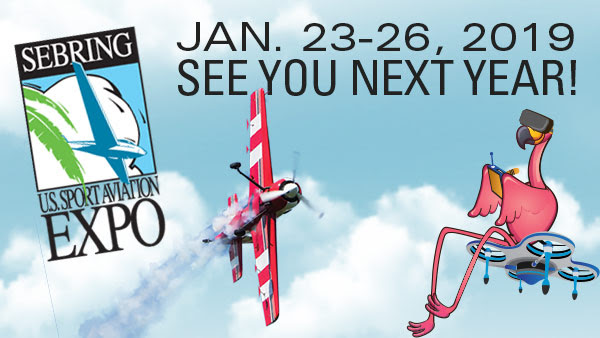 About the “One Week Wonder”

Exactly one week after construction began on the Van’s Aircraft RV-12iS kit that served as EAA AirVenture Oshkosh 2018’s One Week Wonder, the finished product took flight! Charlie Becker, EAA’s director of chapters and communities & homebuilt community manager, said the One Week Wonder’s first flight was made possible due to the employees from Van’s who oversaw the build, the volunteers who assisted, and the thousands of AirVenture attendees who pitched in. This was a huge accomplishment for the team at Van’s Aircraft and all of our volunteers. 100 core builders plus over 2,500 people helped pull a rivet on the aircraft. The 2018 One Week Wonder is the second One Week Wonder project completed in Oshkosh. In 2014, more than 2,500 visitors helped with the construction of the first, a Zenith CH 750 Cruzer.