The effects of electricity have been observed since about 2800 B.C., but it wasn’t until about 1800 A.D. that scientists and inventors observed that the flow of electrical current and magnetic fields were associated. From these discoveries came the telephone, telegraph, and conversion of mechanical energy into electrical energy by means of dynamos (popular name for a generator). 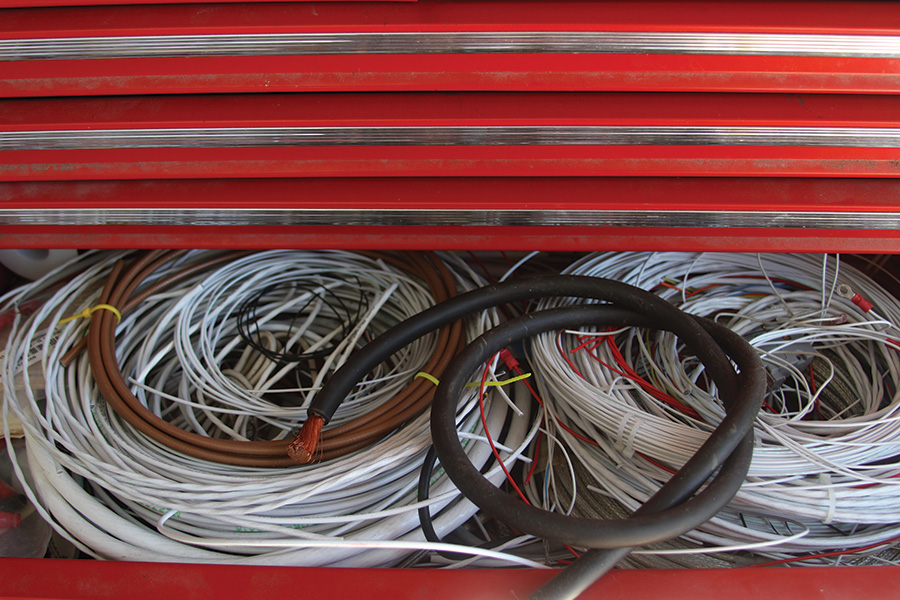 What’s in YOUR wire drawer? Wiring an aircraft can take an assortment of different sizes and types, but it doesn’t need to be mystifying.

Unlike fluids carried from one place to another in pipes and tubes, electricity needed a conductor. It did not take long to discover that metals, most notably copper and silver, were the best available materials for conducting a bucket of electrons from one place to another. Further, copper was “fabrication friendly,” its compression strength and ductility made it easy to draw wires of any desired diameter.

In the case of telephone and telegraph wires, bare metal conductors could be strung up on poles with glass insulators to prevent leakage of signals into wet supporting wood. Insulating the wires reduced risk of accidental contact with the wire, but in 1900 the primary protection against loss of signals or power involved keeping the wires separated by supporting them at intervals on porcelain insulators.

Wiring a building is like wiring a plastic airplane—each circuit to be powered or controlled requires two wires to conduct energy out and back. About 1920, the Rome Company crafted and sold coils of paired wires in a flexible, non-metallic sheath and called it “Romex.” A modern incarnation of this product is still made with PVC insulation.

The next big step in practical insulation for vehicles was PVC or polyvinylchloride. Unlike cotton-over-rubber, the PVC was not a nutrient to fungus. Cessna production aircraft used nylon-over-PVC wire rated at 221° F in the 1960s. When exposed to ozone and hydrocarbons, the nylon jacket became brittle and inflexible. The PVC underneath was a bit more robust but still didn’t like life under the cowl. PVC insulated wire with a nylon jacket is still popular and practical for power distribution in buildings.

About 1985, I worked in a joint venture between Piaggio and Lear to develop the GP-180, what we called a “baby starship.” Raychem Corporation offered us a couple of mature products developed for the space program: “Spec 44” and “Spec 55” insulated wire rated at 392° F. The insulation was both chemically and physically robust and thin. At the same time, other suppliers were urging us to consider 302° F rated Tefzel, a cousin to Teflon.

The Raychem products were more expensive, but did not require an export license. However, the folks at Lear negotiated for the license and the GP-180 became the first airplane I worked that was wired with Mil-W-22759 Tefzel wire. This product proved to be very resistant to the evil liquids and gases under the cowl.

In large bundles of small wire, insulation can make up a major portion of the bundle cross section. There was great interest in the evolution of thinner, lighter and tougher insulations. A number of experiments with exotic insulations like Kynar demonstrated poor performance in general aviation, air transport, and military aircraft, with shortfalls not discovered during development testing in the labs. Some of these exotic insulations were the root cause of total rewiring of certain aircraft, especially those based on carriers.

One constant throughout the insulation evolution was the conductor of choice: copper. Like aluminum and other non-ferrous materials, copper has a mechanical service life. This means no matter how small the repetitive stress loading, the material will eventually fail. The secret to a long service life is…you got it…low stress. 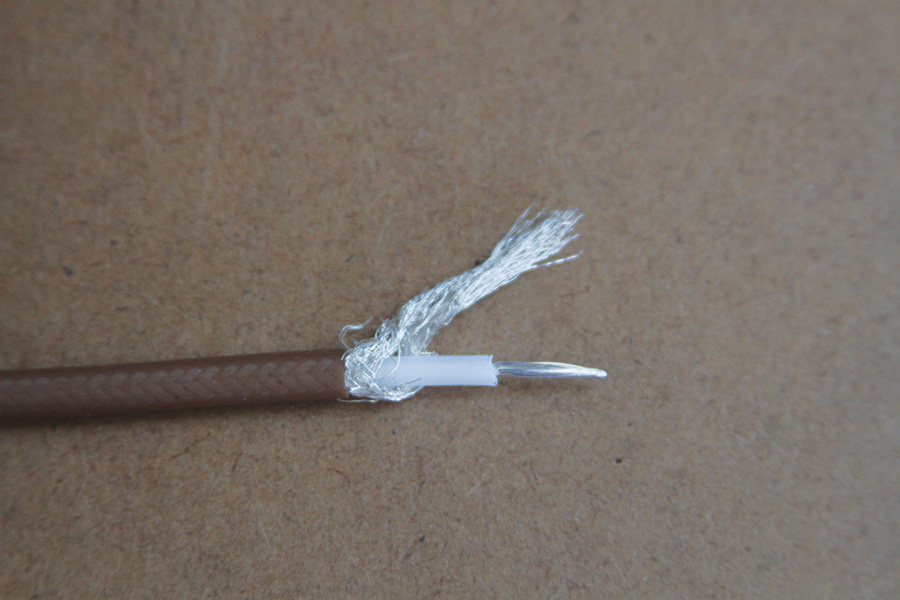 Coaxial antenna cable comes in many types—those with a braided center conductor are much more flexible and easier to work with.

Consider a quarter-inch diameter glass rod. How much can you bend it before it breaks? Not much. But consider fiberglass insulation…strands of the same material in diameters so tiny that bending stresses in the normal course of service are so small that flexed fibers are not broken into little pieces. When there is no motion and zero service stress, solid copper can be used to good advantage in buildings. But wiring in vehicular systems, line cords, and welding cables, one expects vibration or handling-induced bending. Hence, these applications rely on stranded copper as a hedge against bending-induced failure. This property of copper has been understood and accommodated since the first insulation was wrapped or extruded over it.

Another property was understood early on: copper is not a super-conductor; its resistance is not zero. Therefore, a wire carrying current will drop some voltage and get warm. The degree of heating depends on the wire’s environment. A bare wire suspended in free air has good conditions for dissipating heat. Add insulation over the wire, bury it in a bundle with other wires, and the operating temperature goes up. What is the risk for failure of the copper conductor due to heating? Not much. Copper’s strength and shape doesn’t degrade until it’s elevated to hundreds of degrees. A 22AWG wire loaded to 20 amps in free air will stabilize at 232˚ F after 20 minutes…well under the 302˚ F rating for the Tefzel. However, it would not be practical to run a 22AWG wire at 20 amps in real life—appliances would experience unacceptable voltage drop, even if the wire didn’t smoke. In general, we size the wire in distribution systems such that voltage drop under normal loads does not exceed 5%. This is a practical compromise in a balanced quest for low weight and greater system efficiency.

The chart (excerpted from AC43-13) is handy for estimating voltage drop in a wire run. Suppose you have a device that needs 7 amps maximum running current. Suppose further that you subscribed to the 5% voltage drop rule. Track upward on the chart along the 20AWG line until it intersects the 7A curve. Move left to find that 7A will drop 1 volt every 14-feet of 20AWG wire. Doing a little math says that you’ll drop 0.7 volt in approximately 10 feet of wire. 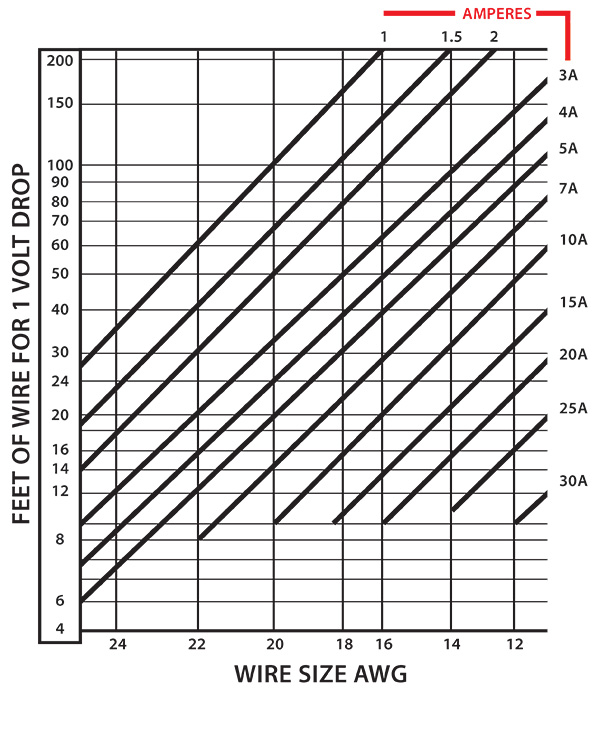 This chart from AC43-13 is handy for estimating voltage drop in a wire run.

Assume you’re 15 feet out in a plastic airplane for a 30-foot round trip. Divide 30 by 0.7 to extrapolate the run for a 1-volt drop of 43 feet. Enter the chart from the left side at 40 feet until you hit the 7A curve again and then drop down to find that you’ll want to use 14AWG wire for that task. A 10A fuse/breaker de-rated to 7A continuous would be the protection of choice.

Assume a run of 22AWG wire from a 5A breaker out to some location remote from the panel. You don’t want to load a 5A breaker to more than 4A continuous. So run up the 22AWG line to 4A then left to find that a run for 1 volt of drop is 16 feet. Whip out the calculator to find that 11 feet of wire translates to approximately 0.7 volts drop. This exercise emphasizes the fact that your wire sizing is more likely to be limited by voltage drop than for overheating. 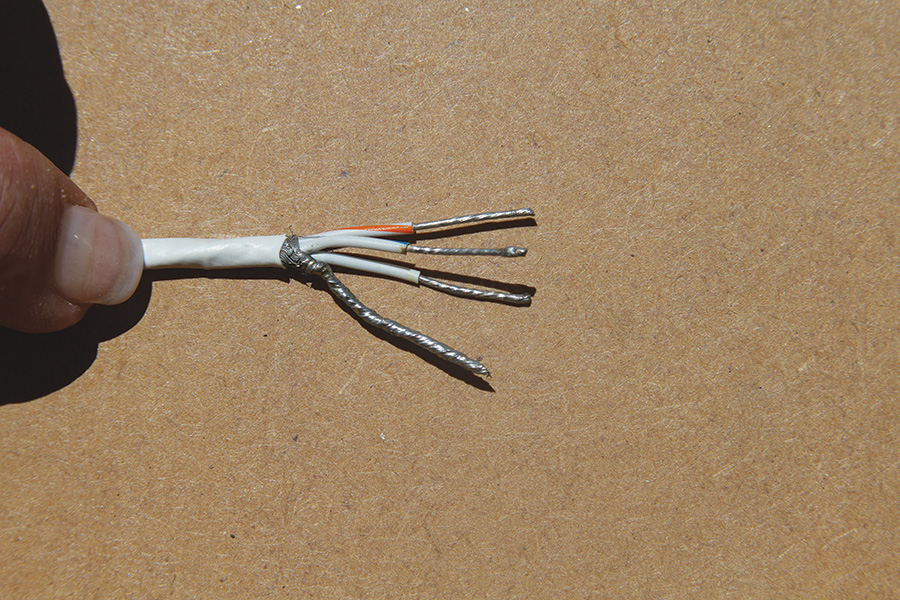 This three-conductor shielded wire with Tefzel insulation is typically used for audio and avionics wiring.

All things considered, Mil-W-22759 Tefzel wire having 19 or more strands has demonstrated qualities in airplanes approaching performance nirvana. It’s readily available at prices that will not seriously impact the total cost of your project. Two noteworthy exceptions to the 19-strand Tefzel convention:

(1) Welding cable is made up of many fine strands of copper. It is soft and pliable, even in the heavier gauges. The insulation on welding cable is crafted to lay out on gravel roads and be run over by dump trucks, i.e. it’s robust stuff. Its flexibility makes it well-suited for jumpers between battery terminals and the adjacent airframe ground and battery contactor. This “gentle connection” improves reliability of battery terminals by reducing stresses. It’s also maintenance friendly. Indeed, welding cable is suited to all fat-wire (read starter currents) slots in your airplane.

(2) Aluminum wire has come of age. Aluminum wire was tried in houses and airplanes with mixed success. Way back when, it was a disaster in some models of Piper Aircraft and the Cessna 177. Modern incarnations are finely stranded, copper-clad aluminum. This wire crimps and solders like copper with the weight advantages of aluminum. If you’re building a composite seaplane with long runs of fat wire between battery and engine, consider using copper-clad aluminum for a significant weight savings.

Welding cable is well-suited for jumpers between battery terminals and the adjacent airframe ground and battery contactor.

The Big Picture and Red Herrings

Getting High Off Grass

Jonathan & Julia Apfelbaum - November 23, 2021
1
How often do you wander the flight line and see a classic aircraft with...