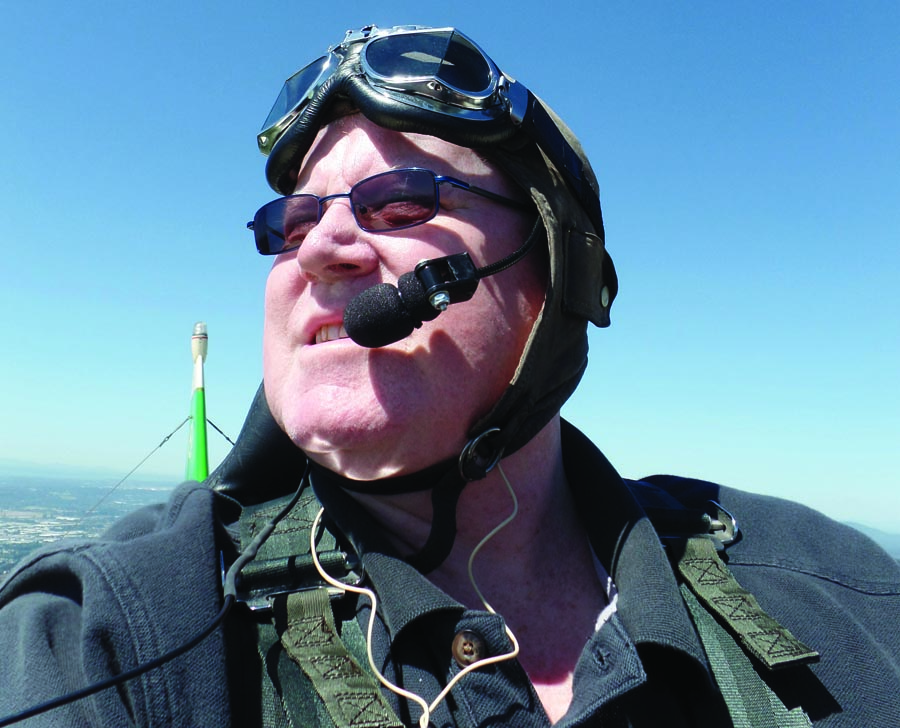 It’s hard to imagine sport flying today without the handheld aircraft radio. A traditional radio requires panel space, electrical power, coaxial cables, external antennas, and (for the certified aircraft owner) an A&P to install and wrangle the paperwork. Instead, for a bit over $200 (and maybe a strip of Velcro), any aircraft owner can have instant 760-channel communications. For the cost of a $30 adapter, a user can just plug his standard aviation headset into the handheld.

Sure, there are a lot of handheld radios thrown into flight bags for backup use by the IFR and continent-spanning folks. But for thousands of homebuilt, classic, antique, and ultralight pilots, the ubiquitous black “brick” is the only communications device in sight.

Now, there is a bit of a problem with that: Most of these sport aircraft are kind of noisy. A stainless steel firewall and a bit of 2-ounce Dacron don’t deaden the sound much. Even with a good headset clamped over their ears, many folks complain that they can’t hear the radio—or at least hear it well enough.

It may come as a surprise to learn that this is not always the fault of a noisy aircraft or a pilot’s aging ears. There’s a fundamental wrongness that robs the handhelds of a good bit of sound volume. And, for that matter, can affect the performance of common intercoms.

Fortunately, it can be fixed surprisingly easily. For as little as $15, you can almost double the sound volume.

Eighty to 90 years ago, when aircraft radios were being developed, they needed some basic components like a microphone, speakers, jacks, and plugs. Rather than invent something new, they looked at what was available in existing catalogs.

Those standards have been kept, for general aviation at least, all the way to today. You could probably take a modern aircraft headset, plug it into a switchboard from the Roaring Twenties, and chat away. 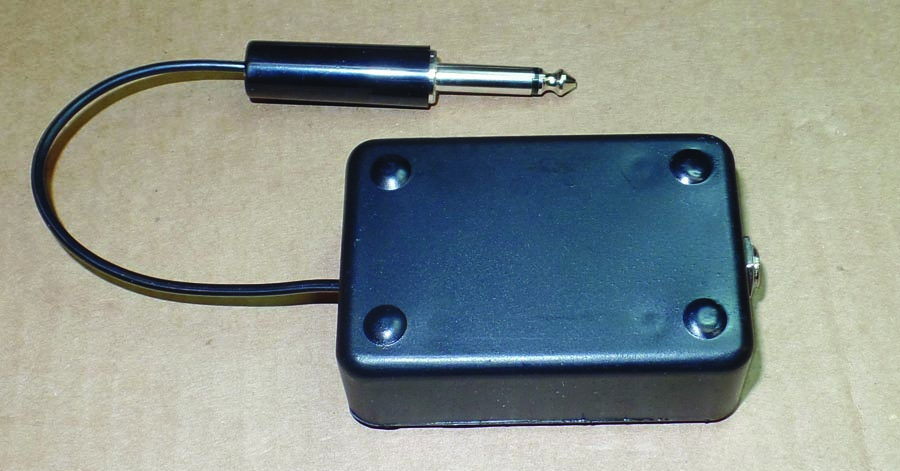 The matching transformer can be installed in a box with the output jack. A short cable connects the plug.

Telephone speakers back then had 300-ohm impedances*. However, the world has since transitioned to an 8-ohm standard for most electronics. But general aviation still sticks to 300-ohm units (which are connected in parallel, for a resulting 150 ohms).

And that’s where the problem lies. Panel-mount radios, of course, still comply with the traditional aviation standard. Most handheld radios don’t. They have an 8-ohm audio output, like all other modern consumer electronics. Even when you buy that manufacturer’s “headset adapter,” the adapter only electrically connects the mike and speaker to the proper inputs on the radio. It does not match the impedance of the headset. 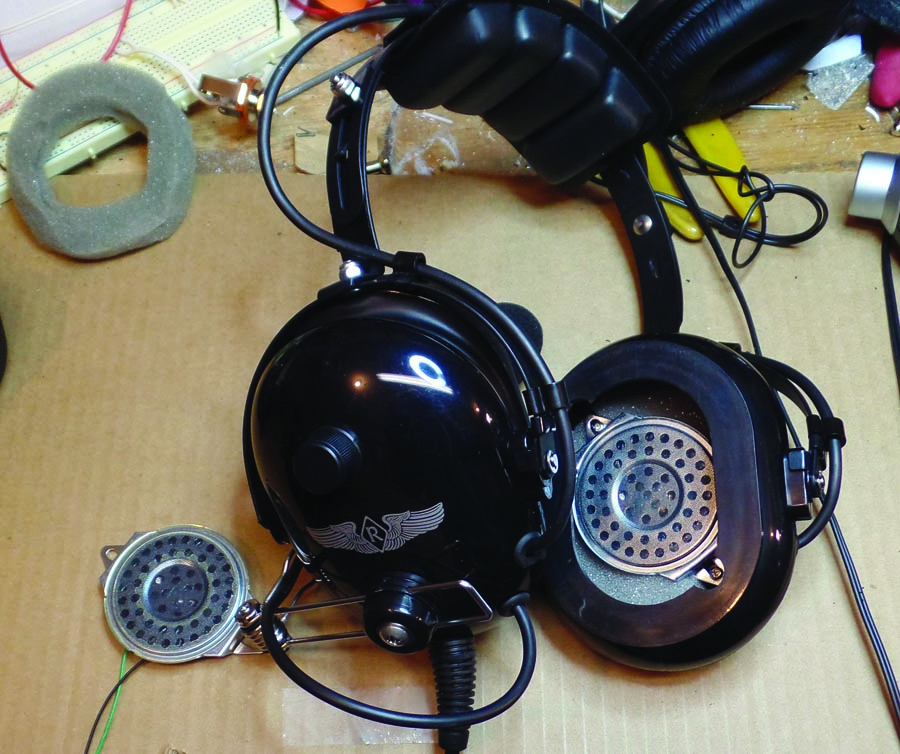 As Rugged Radios builds both 300-ohm aviation headsets and 8-ohm units for other purposes, converting the aviation model is relatively simple.

The radio will work with the higher impedance headset, but it isn’t happy about it. The mismatch means a loss of efficiency and audio power.

How bad of a loss? Testing on my workbench with a sound meter, I found, typically, the loss amounted to about 6 decibels (dB).

Just a 3 dB increase would have meant a doubling of the sound energy. The decibel scale is logarithmic, so the 6-dB loss is pretty significant.

Fortunately, this impedance mismatch is pretty easy to fix.

*Impedance is the resistance of a component to alternating current (like an audio signal) vs. a steady DC voltage. It uses the same ohm unit as ordinary DC-voltage resistance. 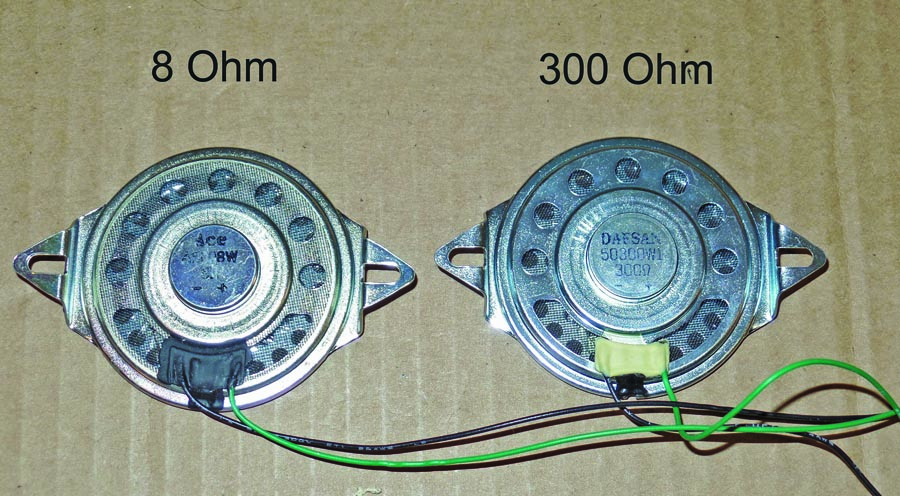 The easiest way is to give the radio 8-ohm speakers, like it’s expecting.

You’ve probably got the solution tucked into a pocket or a desk drawer: earbuds for your smartphone or music player.

You’ll need an adapter to allow the 1/8-inch (3.5-millimeter) plug of the earbuds to plug into the 1/4-inch headset jack. They’re available at most electronics stores, and you can find them online for less than a buck. My last two sets of earbuds came with adapters.

The one problem here is that your radio output is probably monaural, while the earbuds are stereo. This would be fine for a quick test, but one of the earbuds won’t work.

You can buy small adapters that split the mono input into two stereo channels (look for 1/4-inch mono to 1/8-inch stereo adapters) or modify a stereo adapter. Using a 1/8-inch drill bit, put a small dimple into the insulating material between the tip and first ring of the adapter. Put a drip of solder in the dimple to electrically connect the tip and ring, and sand the resulting bump down so that it still fits into the jack. The monaural output of the radio will now go to both earbuds.

Insert your earbuds, put on your headset, and plug the earbuds into the headphones jack instead of the headset’s plug. Plug the microphone in as usual. Now you’ve got the higher volume available to the 8-ohm earbuds, while still taking advantage of the microphone and the noise attenuation provided by the headset.

In my case, I’ve eliminated the headset entirely. I built a skeletal framework to hold a microphone element in the proper position, and I use a product called “Plugfones” for the audio. Plugfones are basically foam earplugs with small speakers built into them. They provide about the same passive attenuation as a standard aviation headset. They cost $25.

I like this approach for several reasons. First, it fits under a standard leather flying helmet, keeping up the antique appearance of my airplane. Second, they’re so cheap I can carry spare pairs in the airplane. Third, it completely eliminates the dreaded “clamping” effect of a standard headset and is much cooler in the summer. 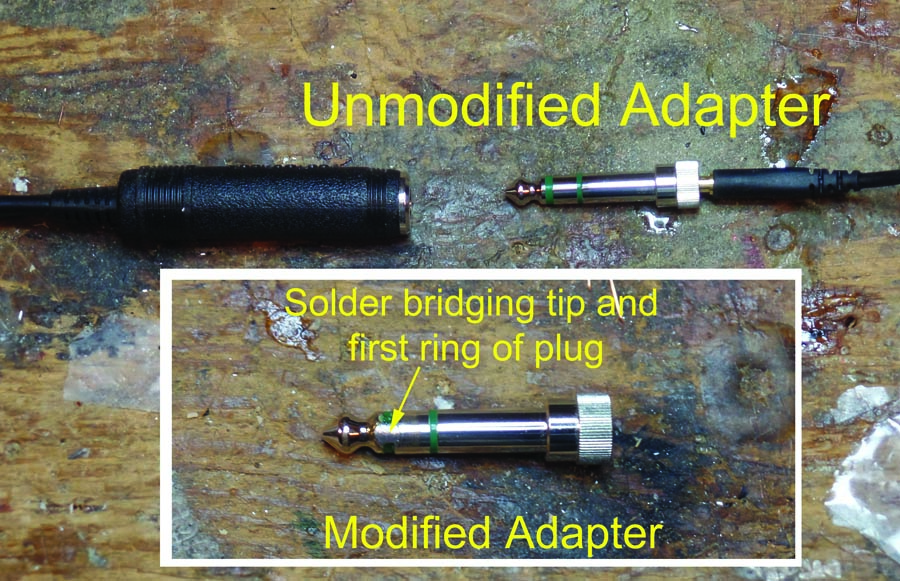 ou can use a set of stock earbuds with a handheld with a common 1/8-inch to -inch adapter. This modification will convert the adapter to send audio to both earbuds. Mono commercial adapters are also available.

Some folks, though, hate stuffing things in their ears to fly. It costs a little bit more, but replacing the speakers in an aviation headset is a good option.

Rugged Radios sells a wide variety of radio equipment for various purposes. They’ve got a good-quality aviation headset for $105 (model RA200). They also sell replacement parts to fit all their headsets. I bought two of their 8-ohm speakers ($15 each) and a “demonstrator” RA200 headset ($65). The replacement speakers were an exact fit, and the headset worked great over the winter.

One could upgrade an existing headset, but finding speakers with the right mounting holes might be an issue. Also, do not try this on an ANL (Auto Noise Limiter) headset, since the noise-cancelling electronics will be designed for higher impedance.

Remember, too, that the modified headset will only work when directly connected to a handheld. Don’t use them with an intercom, or with a conventional aircraft radio. 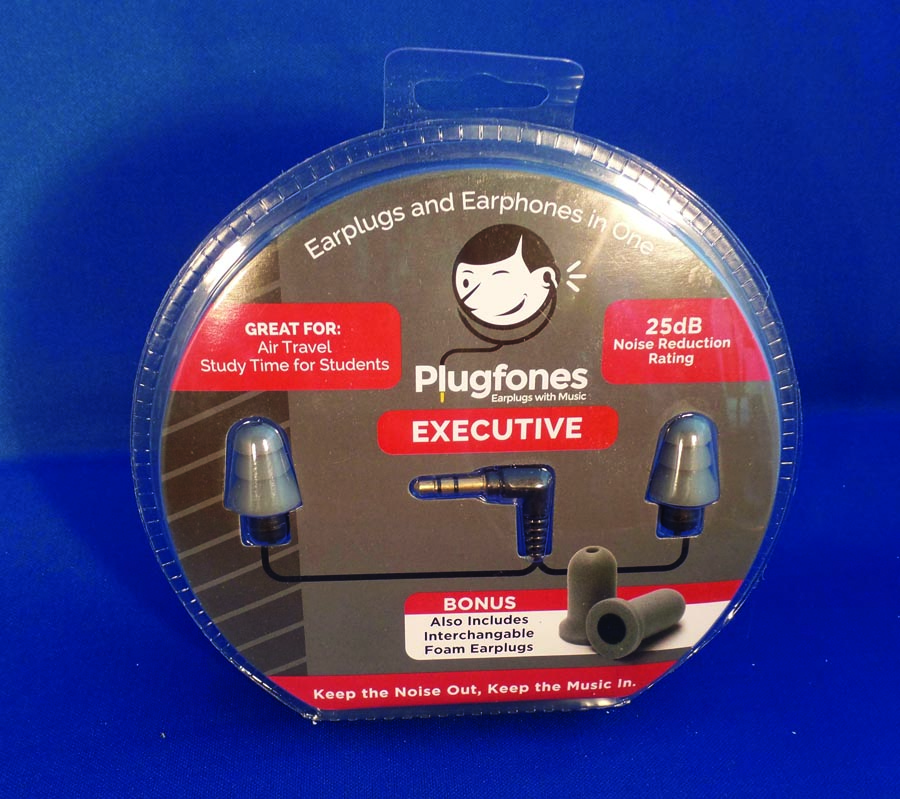 An alternative to earbuds, Plugfones combine the earphone function with foam earplugs.

When testing the loss caused by impedance mismatch, I used a small transformer to correct the issue. If you don’t mind having to connect an adapter cable or a small box to your radio output, this would allow use of unmodified aviation headsets. 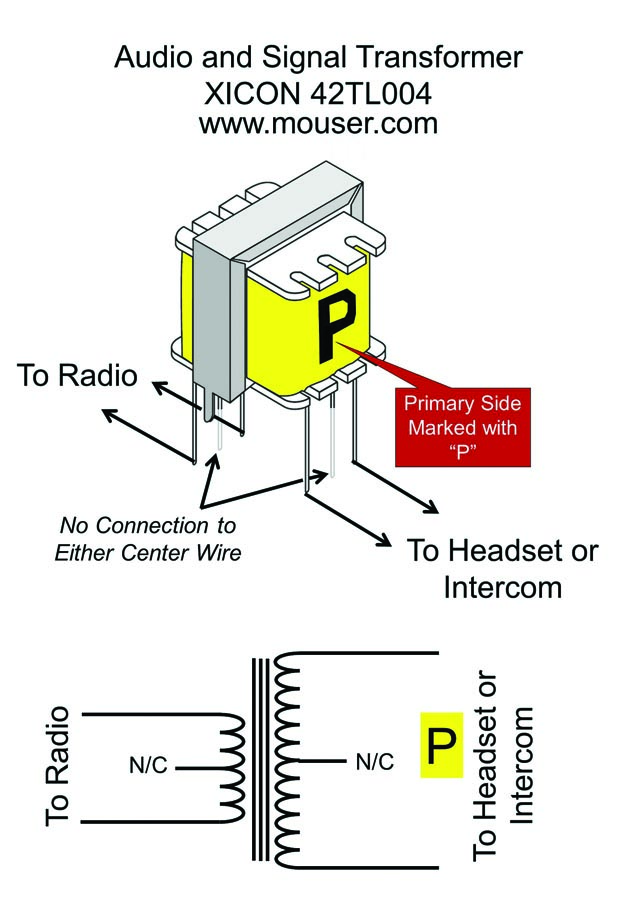 A $3 transformer can almost double a handheld radio’s sound output.

I use a XICON 42TL004 transformer, which is about the size of a marble. It has 200-ohm impedance on the primary side (marked with a “P”) and 8 ohms at the secondary, and sells for about $3 from Mouser Electronics. Connect the primary to a jack for the headset and the secondary to the plug that fits the headset adapter. Plugs and jacks can be found at Aircraft Spruce for $4 or so.

Monaural (“Mono”) plugs and jacks are sufficient, but if you have a local source, you can use stereo units. If you do, connect only the tip and the sleeve to the circuitry.

Getting fancy. This box includes a jack for the microphone, as well as both -inch and 1/8-inch jacks for earphones.

If you use an intercom with your handheld, you may not notice a volume issue. The intercom has its own amplifier, which may give enough boost to overcome the impedance mismatch.

However, the higher volume levels required may make the unit oversensitive to external noise. One Challenger owner reported that when a second headset was added, the intercom picked up engine noises and overpowered weak signals.

Adding the impedance matching transformer between the handheld and the intercom fixed this owner’s problem. He reports being able to turn his volume controls down considerably, and the engine noises quit breaking in.

Note that the “speaker replacement” or “earbud” options won’t work here. The mismatch is between the handheld and the intercom. The output impedance of the intercom will match aviation headsets.

In this case, a commercial extension cable was cut and the matching transformer added. The center portion can be covered with heat shrink tubing or electrical tape.

Will fixing the mismatch issue help you? Probably. The great thing is that it doesn’t cost a lot of money. The transformer, plug, and jack of an impedance matcher will cost you less than $15. No changes to the airplane, just a short cable that gets plugged into the headset jack. Turn the radio squelch off (i.e., radio hisses, full time) and try it with and without the adapter. Those who don’t like add-on boxes can try the earbuds or conventional headset approaches.

Not long ago, I was having real problems understanding the radio in my airplane. It was probably a combination of the headset, the radio, and the pilot all getting older.

They’re all still getting older. But this pilot is hearing the radio a whole lot better. 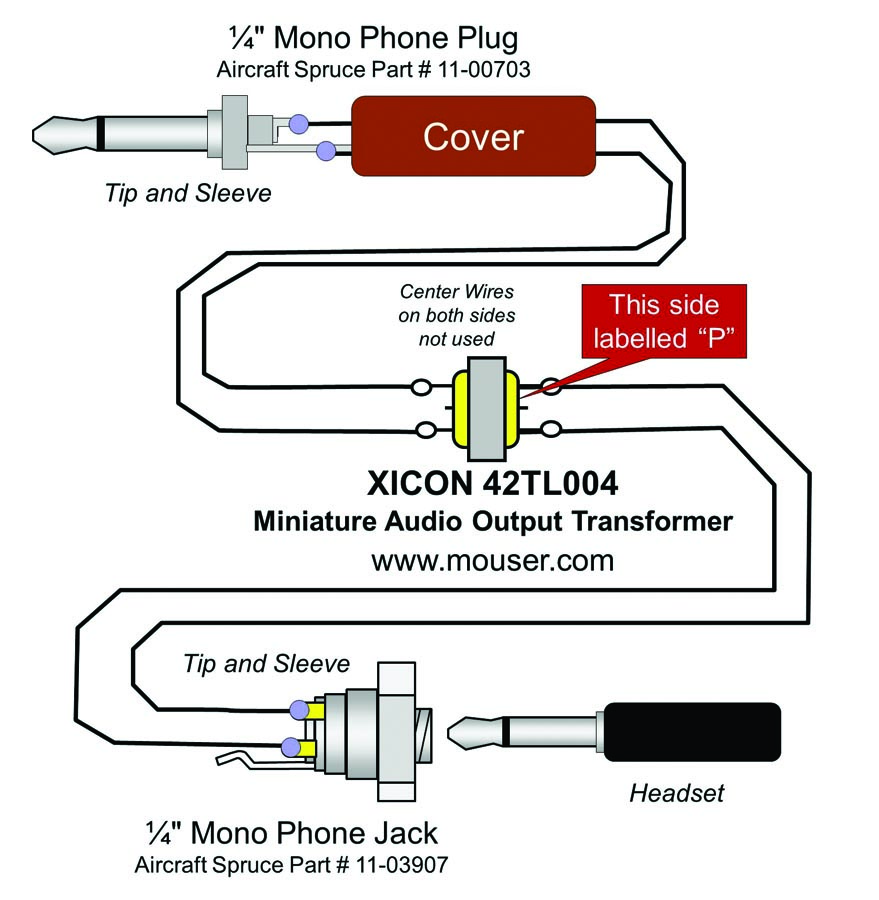 Total parts cost is less than $15. The transformer and the jack can be mounted in a small plastic box.

Kathleen Evans - August 16, 2008
0
RV builder Kathleen Evans makes a case for airplane building as a true partnership between spouses based on mutual interest and respect.