Aircraft interiors were recently suggested as a suitable subject for this column. Anyone who’s seen my open-cockpit rat rod knows why, as the box kite I habitually aviate has a hopefully unique hole du habitation. 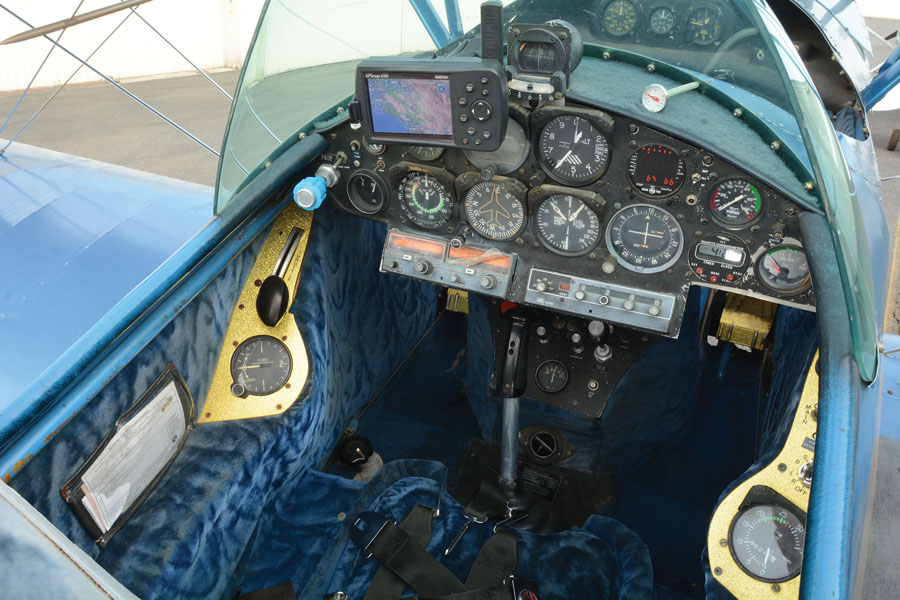 Like a messenger from a time long gone, this cockpit shows the wear of 37 years of adventure.

Product of the 1970s and trimmed in the sort of blue velour a French hotelier might wince at, gilded with bass boat gold metal flake panel inserts, and left to decay for 37 years in the gentle Southwest ultraviolent rays, my Starduster’s cockpit is at least rodent-proof, as no self-respecting kangaroo rat would dare be seen in it.

In fact, most people might say it’s ugly, except airplane people are typically well-mannered. Personally, I consider it historical, if any recollection of the disco era could be elevated to such status. It is, after all, a faithful testament to the blessedly brief baroque period in mid-American taste, when the yearning for upscale status ingrained by the depression peaked in the ’60s, then lingered into the malaise era of oil embargos and declining national pride.

In any case, I simply don’t see the interior any more, repetition having dulled any sensitivity to the glittering metal flake and tattered blue velour. It’s only when someone new to the plane walks up to it that my toes curl in embarrassment inside my Italian racing booties.

Besides its visual offense, just about everything in this cockpit is old, technically obsolescent, or simply worn out. In other words, I’m carting around a bunch of useless weight in the form of a VOR with glideslope, a gyro compass that pinwheels given a half-aggressive turn, and an artificial horizon with an unusual emphasis on the artificial. The VSI has never worked, the surprisingly accurate tachometer is in the right armrest, and the radios are especially visually abhorrent. They work well, but the faces are bleached like whale bones, and the plastic film in the windows where the frequencies are displayed are better described as gnarled plastic curls reminiscent of old Chinese royalty fingernails.

There are two advantages to this, however. For one, the majority of items in the cockpit are equally thrashed, lending a visual cohesiveness. This would be called patina in arty circles and might bring more money in an antique shop, but in my cockpit it at least means there is an evenness of wear. Put something new in there and it would shine like a ruby in a goat’s ear.

The other advantage—and it is an advantage in an open-cockpit airplane—is no one is going to steal any of this junk, so you don’t feel so bad leaving it outside and overnight at some place far from home.

Curiously, even with the interior fully paneled with walls of blue fuzz, there is no storage room in the immediate cockpit environment, not even a pencil holder. Built when WAC charts were the answer to biplane cross-countries (try unfolding a paper chart with one hand in an open cockpit sometime), it’s near criminal there isn’t a single pouch, pocket, bag, cubby, or hideaway for cockpit incidentals. There’s some storage in the headrest—my wife’s purse was once sucked out of this thanks to a lazy latch—but it’s not accessible in flight, except by the wind.

Another area useful for small-item storage but also completely inaccessible in flight is a curious recess under the seat cushion. Seemingly designed for a seat pack parachute but too small for that, the main effect of this depression is to allow the seat cushion to crush down into a hole. Unfortunately well past my waif stage, the submerging seat cushion means the excess of my posterior—actually the hip joints—ends up perching on two very distinct pressure points. There’s a third hard ridge along the lower back as well, such that around an hour in the air you begin to think of little else, and after two hours you’re ready to fly the approach inverted to relieve the pain.

A partial answer is to pack the cavity under the seat cushion with the shirts you plan on wearing when you get there. This keeps the hips slightly elevated, solves the issue of where to put the shirts, and ensures they stay creased for eternity.

Another feature of these molded fiberglass seats is they simply lift out of the cockpit, being held in by the combination of your person and the five-point safety harness. This is extremely handy during condition inspections and such, and allows wide-open access behind the seat backs. In the front cockpit, that means generous access to behind the rear cockpit’s lower instrument panel area, while in the rear cockpit it allows reaching the “cat carrier.” This is a canvas storage compartment—it has a fiberboard floor—of sufficient capacity to accept a pair of socks, boots, and a stuff-it-in-there jacket. It is suspended by rope from the primary structure’s tubing in the aft fuselage and has a zippered front door. This is, in fact, the aircraft’s main storage compartment. It’s also something of a camouflaged safe, as when tied down outside during food stops or fly-ins, the portable GPS and other desirables can be secreted within, and with the seat in place there’s not a hint anything is behind it.

If all this sounds unique, what many find the most unusual fitment is the cigarette lighter and ashtray, the latter in the right floorboard. Smoking is not the first thing that comes to mind with open cockpits, but it’s entirely possible if you can get the coffin nail out of its pack using one hand. Dusty, the crusty aerial applicator in our area ages ago, never left the ground without a stogie clamped in his jaw, and he flew an open-cockpit N3N with an R-985 providing the breeze. Even better, a previous owner liked to go very long distances in the Starduster and, for better economy at altitude, had a turbocharger fitted for 98 hours of operation. What could be better than cruising along at 140 knots true while sitting outside at 12,000 feet and having a puff? To each their own.

So, the interior could have been better back when it was built. So could some interiors today, although the well-developed planes from the major kit makers mean there is less of the free-form execution described here. Above all, comfort is on my to-do list when the Starduster eventually gets stripped and rebuilt, and I recommend it for your build. For me that means all-new seats with no pressure points, although the lift-out feature is something I’m sure to retain, and it looks like I’ll have room for under-seat compartments. The second is storage. There’s never enough in our small planes, and if you’re gluing together your first build, spend some time identifying just how you’ll use your interior and install the water bottle holders and gum dispensers where you want them.

Third on my list is style—why else do the cross-country thing in a biplane? I could stay period correct and find some new blue velour…and a mini disco ball would be a real trip at dusk in the glint of the instrument lights. Or maybe I’ll chicken out and go with tan leather.