Tech forums have to be one of the best things in experimental aviation today. This is where a person hopefully more learned than yourself stands on their hind legs in front of a crowd to speak about almost any aviation subject. Occasionally found in the better EAA chapter meetings or regional fly-ins, tech forums rise to importance at the big AirVenture to-do. Maybe it’s because the EAA dedicates a whole village of palapas in a park-like setting for these talks, or possibly it’s because some of the best minds in the business are on stage, but all that education in one spot is tough to pass by. 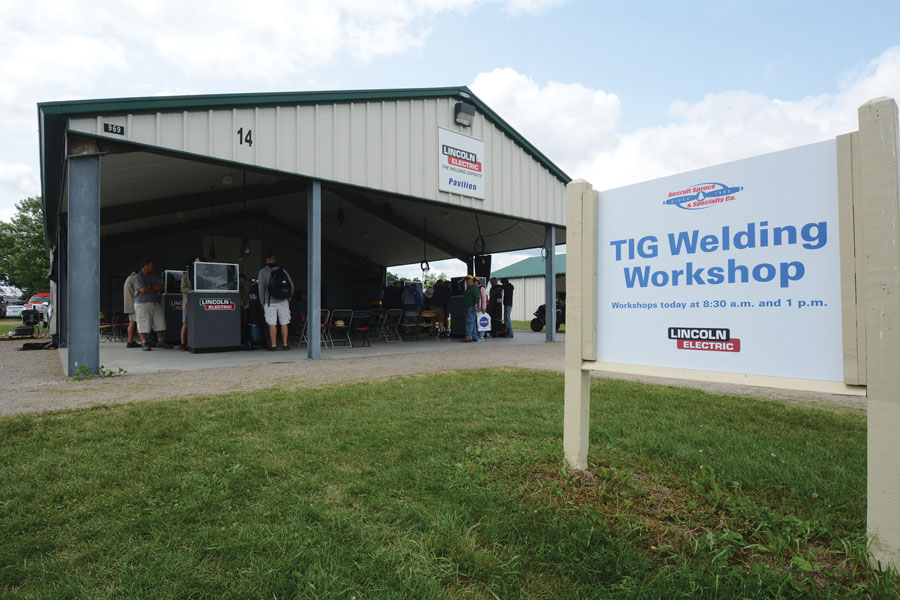 There’s a whole village of these forum sheds at AirVenture. This one is dedicated to welding, but most are simply fitted with a podium, screen, projector, and chairs so they can be used for any subject.

If nothing else, there are so many tech forums at OSH they fall into the “Valid Reason for Going” column when making your summer plans.

True, the topics covered in these meetings range from seriously new and interesting to “What I Did on My Summer Vacation” snooze-a-thons, but for whatever chaff may be in the air, there are so many forums offered there’s always something of interest on offer.

This last year I determined to attend as many forums as allowed between riding the trams and drying out my tent. Thus, I found myself listening to the gospel according to Mike Busch. Now Mr. Busch is a well-known engine technologist thanks to being everywhere from AVweb to AOPA, plus he has extensive real-world hands-on experience with mainly certified Lycs and Continentals. The congregations at his talks are justifiably large.

Unlike myself, Mr. Busch was able to succinctly sum up much of what a pilot needs to know about traditional general aviation engine operation, which mainly boils down to interpreting and controlling EGT and especially CHT measurements.

Busch also provided succinct summations of what such typical engine parameters really are, i.e., EGT is power wasted out the exhaust pipe, and CHT is power wasted to the cooling system on the power stroke. Busch ground down on EGT absolute values like an old cigarette butt. As absolute values they’re nearly useless unless troubleshooting a specific issue, in which case they’re wonderful for pinpointing stuck valves, fouled spark plugs, and so on. But for setting the fuel mixture, only relative EGT measurements are needed.

What Busch is interested in is CHTs. He finds the 500/460 F upper limits from the manufacturers far too high, saying he much prefers holding Lycoming CHTs to 400 F and the inherently cooler running Continentals to 380 F in legacy aircraft and 380/360 F in more modern applications (Cirrus) with their better engineered cooling systems.

These numbers fit with my experience managing a 10:1 Lycoming 540. The engine is just a couple hundred hours out of a major overhaul and runs well. Fitted to my Starduster Too, it grins like a baleen whale from behind a Piper Comanche nose bowl and wears tight, well-sealed baffling. The cowling exit is, um, the average right-angle hole, and the 13-row oil cooler boasts its own dedicated inlet and exit air ducting, which has proven a good cooling arrangement.

Typical rich of peak cruise numbers for the combination are CHTs around 375 F and oil temps of 210 F given one shirt and leather jacket ambient temps. Call it 70 F.

Pull the red knob to lean of peak and the CHTs drop to 320 F pretty fast, while the oil temps slowly amble down to the Vernatherm setting of 185 F or maybe 190 F at 65 F ambient. Run lean long enough at 60 F OAT and the CHTs will also ever so slowly drop as the oil cools. Give it a half hour or so and the CHTs will go sub-300 F. About 295 F is typical when cruising lean of peak at altitude, and I have to think these numbers are a little cooler than average thanks to—besides the tight baffling and generous cooling air—the high compression. I must add that those cruise figures are at mumbling power settings and typical OAT figures. Start dragging the wheel pants through the brush in summer at high power and things warm up now, but never quite 400 F CHT toasty.

At high power settings some of this engine’s CHT behavior is attributable to an exceptionally free-flowing exhaust system, but that’s another column for another issue.

So, can CHTs get too low? Only secondarily and then under special conditions says Busch. There’s no worry the engine itself gets too cool, it’s when combustion energy gets so low the EGTs fall below the fuel’s lead-scavenging threshold. This is quite low but is likely during ground idling and possible in loitering operations such as fish spotting, pipeline patrols, and law enforcement work. At such low temperatures the ethylene dibromide added to the fuel doesn’t convert the lead oxide produced by combustion, and you get all those glassy round balls in your spark plugs that are so much fun to pick out during condition inspections.

But far more generally, too high CHTs are the issue. Enough so Busch says he fits a big ‘ol yellow master caution light to his instrument panel. Any number of circuits could be wired to illuminate such a bulb, but in the present context Busch says his is set for 400 F CHTs. It’s a great way to protect against overlooking out-of-parameter readings when otherwise occupied.

Of course it’s hardly just engine matters in the forums. Our own Barnaby Wainfan’s learned expositions on all things aerodynamic are not to be missed. Other experts are easy to find as well. Dan Rihn gave a thorough history lesson regarding his One Design aerobatic craft that put his airplanes, and aerobatic flight in general, in better perspective for me. And naturally I found a few less mainstream forums to attend. One such detailed flight testing a Messerschmitt 109 in Germany using modern data logging equipment. The subject plane was esoteric but of interest to me, and hearing the testing protocol detailed was illuminating. If nothing else, my tent was dry by the time I got back to it.