Youthful ignorant that I was, it took a few years for me to realize just what a disappointment I presented to my definitely older friend and neighbor when he blurted out mid-conversation, “You’re a dreamer! That’s what you are, a dreamer!” A Greatest Generation pilot, he rightfully wasn’t impressed by my lingering schoolboy imagination, especially when coupled to ambition as limited as mine.

In my later years I’ve attempted, with modest success, to rectify my overly abstract approach to life with a modicum of practicality. So far my greatest achievement has been marrying a concrete-specific woman who provides me sharply defined goals whenever she approaches the end of her patience.

That said, I can still mentally soar through tall pillars of towering cumulus while sitting in an office, fingers idle on a keyboard. And in the off chance some of my musings might provide inspiration to others more goal oriented, I thought to mention one of them here. 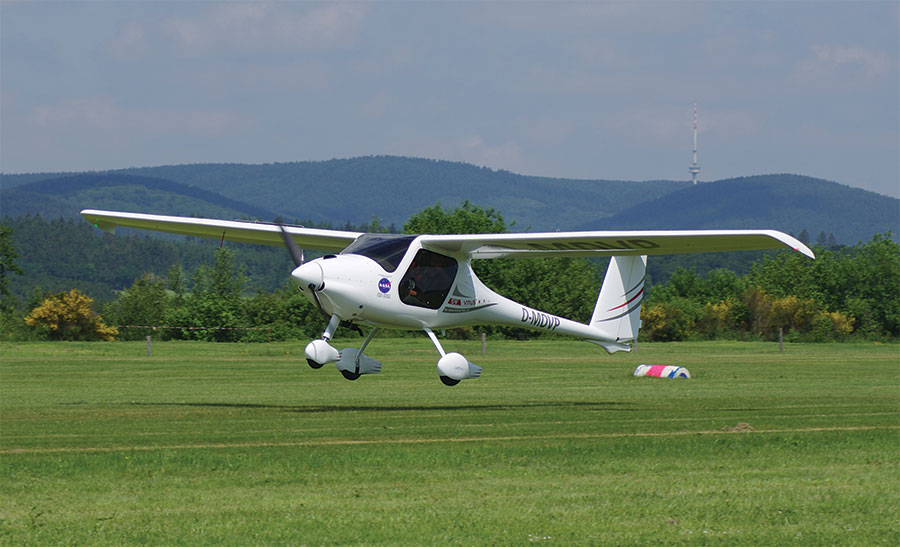 Credit Pipistrel with offering an advanced line of modestly powerful gas and electric flyers. It might be fun to take things up an electric notch—just the thing for an adventurous experimenter. (Photo: El Grafo, CC BY-SA 3.0 [https://creativecommons.org/licenses/by-sa/3.0])

Curiously enough, having spent five decades converting fossil fuels into motion—most of it ultimately circular—I harbor a distinct desire for a simple, yet rewarding, airplane using electric propulsion. Exposure to high-torque electric automobiles has opened me to remarkably high-thrust, quiet, reliable, maintenance-free and efficient electric motors, and the idea of combining those benefits with flight has proved powerfully attractive. For sure battery technology is not advanced enough to render good old energy-dense petroleum fuels obsolete any time soon, but certainly a simple, lightweight, local electric flyer is a proven concept today. Pipistrel, Siemens, and others have seen to that.

In fact, interest in electric commercial aviation is exploding, an industry analyst just saying as I not so idly type this that he was keeping track of over 140(!) electric aircraft projects. These range from the largest airliners down to trainers, with the players divided between out-of-the-blue start-ups and major aerospace giants. Much of this activity is in the proof-of-concept stage with admittedly considerable work to be done in batteries, power distribution (controllers and multi-“engine” airframe design), safety, regulation and, of course, cost. But there are also technological tailwinds starting to blow from the world’s automakers, who are tripping over themselves to relegate gasoline and diesel engines to historical status—if only they had just a little bit better batteries and the necessary charging infrastructure keeps up. But things are headed that way.

The world is going to need a bunch more “green” electrical generation to run this all-electric nirvana as well, but that’s flight planning a little farther over the horizon than this column allows.

Because the trainer market is much of what the electrically oriented aviation industry has in mind and is closest to our sport aviation mandate here at KITPLANES, let me note so far the two-seat electric aircraft have been doughty little tadpoles sitting on spindly tripod landing gear. They don’t excite.

Instead I’m imagining a sleek plastic taildragger plugged into the solar array atop the hangar. To reduce weight and simplify, it would be a single-seater (insert your tandem two-up fantasy here if you wish). The cockpit could be Spitfire narrow as the electric motor would naturally be slim and the instruments minimal, both because as a simple sportster not much is needed but also because almost no “engine” instruments are required. Think sailplane sparse and not that wide-as-middle-age Royalite-encrusted Playskool panel of your Cessna 150 training days.

Because it’s always sunny in Southern California according to the chamber of commerce, there it would sit, fully charged, waiting to zip out for a good hour of maneuvering and pattern work at the end of each day. Or it could easily flit to the next airport for weekend breakfasts. Even with a powerful motor, operating costs would approximate inconsequential, plus the flights would be fleetingly detectable by those on the ground and sufficiently thrusted to hold my interest. Put all that together and it should be the breakthrough to flying whenever I felt like it—flight on a whim, as it were.

Admittedly, Pipistrel already offers something close to my vision, but with perhaps not quite the emphasis on sport and definitely for more than most of us can easily justify for a run-around-the-pattern plane. They do sell their electric powertrain separately; figure about $30,000 for the most powerful 40 kW version. Might be nice to double that…

In any case, the benefits of electric flight are so great it makes me think fuel-burning aviation will fade like newsprint in the desert once electric turns the corner. But first it has to turn that corner.

Signs are that corner is in sight, at least if we squint into the hazy future. I don’t mean to join the long list of prognosticators who have prematurely announced the future has arrived, but for those interested in something a bit more theoretical than banging out another RV (nothing wrong with those, of course), laying out a dedicated electric sportster would seem a worthy pursuit. For now it would be a limited-ability machine, but a useful poke into the future nonetheless. Plus, should batteries improve, the airplane should be easy enough to upgrade.

There are plenty of challenges, of course. Likely the greatest impediment to amateur-built electric aircraft is a lack of electric propulsion knowledge among currently active aircraft builders. Generations of kit makers and builders have internal combustion experience. In fact, thanks to the dominance of just two aircraft engine companies, Continental and, especially, Lycoming, that knowledge is so embedded in our thinking it’s a trip wire to moving on to something else. Consider the divide between Rotax and Lyconental fans.

Furthermore, those that do have the cutting-edge electric knowledge are in industry, and that industry, especially in the United States, is understandably locked firmly onto the immense prize of ground transportation. While hope is not a plan, without a formal path set down by NASA or the FAA, and the electric trainers coming out of Europe priced like a second home and aimed more at flight schools instead of us sport pilots, we likely await a motivated amateur just keen and well-connected enough to build that first e-sportster. He might start with Pipistrel’s $30,000 electric powertrain, which they offer separately, but I’ll bet he tries to hot rod it for more kilowatts.

While we await Glenn Curtis with an iPhone, it’s motivational to consider the advantages of electric flight. If nothing else it means no more oil changes. Or buying oil and oil filters. No more mouse milk additives. No oil analysis. No rusty camshafts. No welding exhaust system cracks. No shock cooling. No $5.00 per gallon fuel. How about no overhauls?

Far more impactful, it means less noise, and that alone is a game changer for many airports, and by extension, us pilots. And technically correct or not, it means far less pressure from environmentalists, plus let’s face it, society in general. Electric motors don’t spread lead or CO2, at least not directly and not at all if wind or solar are involved.

Some changes might not be so welcome. It’s going to be more expensive before it gets cheaper, but then it will get much cheaper by the hour. Electric motors are soulless automats with the romance of a librarian in curlers, so we’ll all have to keep a 450 Stearman around for nostalgia. Sometimes a few of those lithium-ion battery cells need replacement. “Refueling” can take a while, but that’s something technology will eventually address. The airplane won’t get lighter the longer you fly it. Then there’s the question of what to do with all those batteries once they wear out (at least that takes many years). Your stash of IO-360 cores won’t be worth so much, and your smoke system won’t work at all.

Still, electric flight seems like a nice dream to wend through pillars of towering cumulus. Let’s hope the reality is half as good.