I don’t believe I’ve introduced you to Paul “Bugsy” Gardetto. Bugsy and I served as colonels together in the Air Force, and we both built RV-7As. Back at Langley, he let me share his T-hangar space and cost during his last long deployment to the sandbox. We’re both married to beautiful blond goddesses, and we’re both students of aviation safety and human factors. 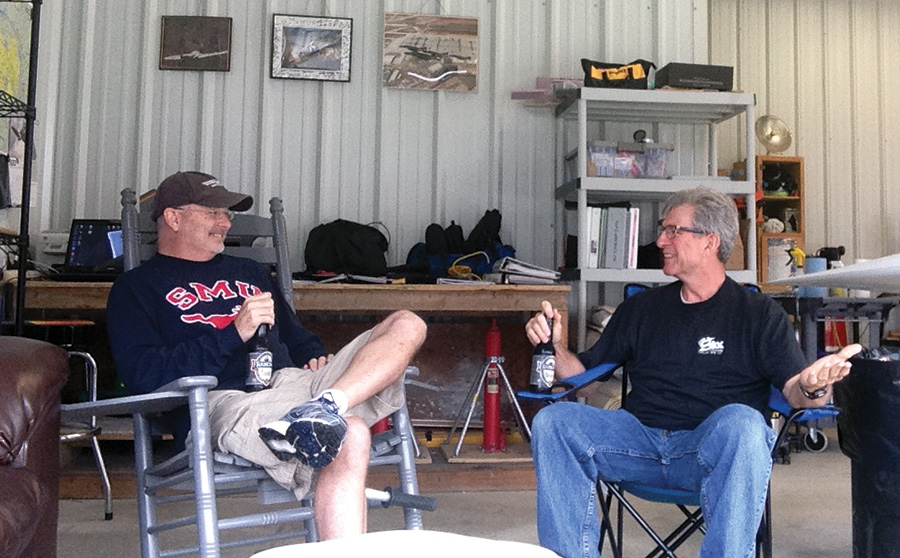 One day, Bugsy and I were at the hangar leading other builder/pilots in a hard-hitting Experimental aviation risk management symposium. Over some cold micro (brew, that is), I remarked at how building an aircraft, and preparing myself to safely fly that aircraft, is far more of a mind-switch than I had ever anticipated. It’s more than just a great mental workout: For me, it’s a total change in how I’ve ever gone about training and preparing for flight in a new aircraft.

Bugsy was several months ahead of me in his build (he was completing his Phase 1 fly-off, which I just started). He had noticed exactly the same juxtaposition, and had already been considering its reasons. This was just the sort of philosophical hangar talk we needed, so we primed the conversation pump with a second round.

Here’s the difference: As military aviators, we were handed tech and ops manuals (that somebody else wrote) and keys to an aircraft (that somebody else built). We learned all the operational procedures and limits (that somebody else determined through flight test). Military flight training is an entirely organized and structured endeavor: Our job was to learn and perform. It took three of my four years as a lieutenant to finally arrive in Germany qualified in the F-4G Phantom Wild Weasel. 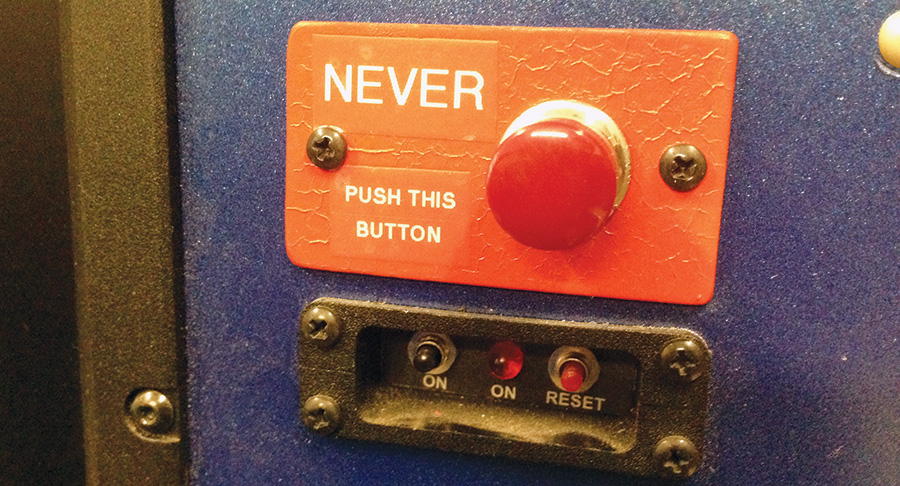 You’ll never find one of these on a certified aircraft. Oh, the joys of Experimental aviation.

Now, today, we were building our own airplanes, writing our own POHs, devising our own test plans, and ultimately training ourselves. We were constructing our own aircraft logs, publishing our own airplanes’ weight-and-balance and operational flight limits. “Formal” training came in the form of two to four hours of dual instruction from a CFI in an A-model RV. This development as an Experimental aircraft pilot/builder may not have been as rigorous as the military checkout, but it is a wholly different way of doing things. I’m not saying it’s bad. Not bad at all. Just different.

We then reflected on how Experimental aviation allows a builder to get creative with solutions to some of the design and construction challenges. There is more than one approach to design, construct, or install systems or components onto our E/A-Bs.

That’s one reason why I, like so many of you, love Experimental aviation. For instance: The Van’s stable of airplane designs use piano hinges to adjoin the top and bottom cowl halves and attach the cowlings to the airframe. However, MilSpec and Skybolt fasteners offer another solution, equally effective and, for some, more attractive and timesaving. Not better or worse, just different.

Another great example: Whereas the RV-7’s design has a builder attach the canopy bubble to the frame with flat-head screws, nuts, and/or rivets, Bugsy and I employed a more experimental method. We both affixed our canopies to the frames with Sikaflex, a nautical adhesive system used to adhere windowpanes to boat window frames. In our RVs, the Sika protects the Plexi from flex-stress cracking and leaves a much cleaner-appearing install.

As Bugsy and I considered our experimental deviations from the designer’s intended approach to a completed RV-7A, we concluded we have actually improved on the design: Through our own efforts, we have over-engineered aircraft that are already quite well engineered. That, in turn, reduces risk.

“Still,” I said as we paused for reflection and another sip, “what new risks do Experimental aircraft builders introduce to their aircraft?” 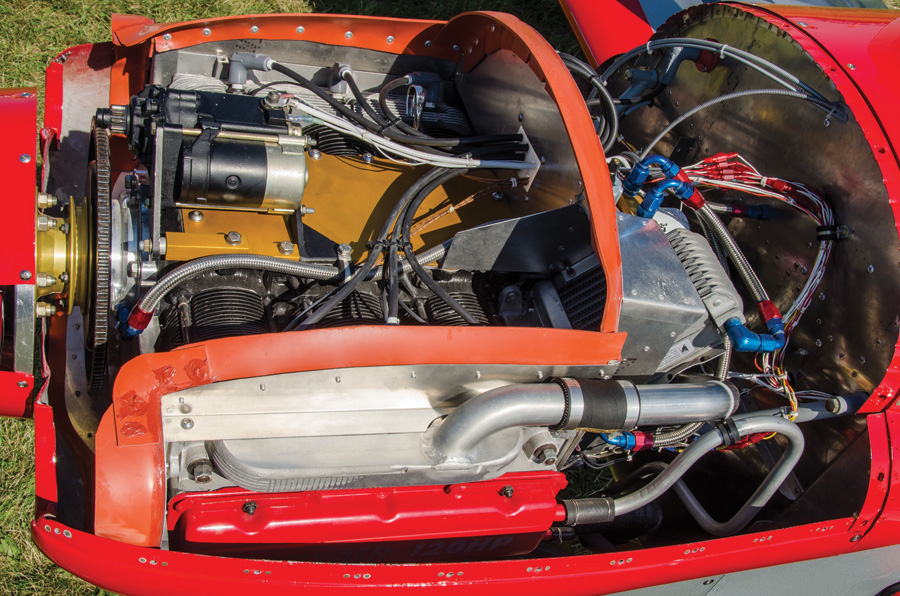 A few years ago, an RV-6A pilot successfully executed a forced landing after his engine lost power during a day VMC cross-country flight. This pilot did not build the aircraft; he had just purchased the airplane and was flying it back to his home airfield. During climb-out after a fuel stop, the engine suddenly quit. Switching on an auxiliary fuel and ignition system did not heal the engine. The pilot set it down in a pasture; he and his CFI passenger survived with minor injuries.

The FAA inspector noted that the aircraft had a Chevy 4.6L automotive engine converted for aviation use, and that the carburetor air filter was dirty and clogged. More importantly, the wire connecting the ignition coil to the distributor was disconnected from the coil terminal. Both were automotive-style components with traditional terminal male/female plugs, but no additional locking feature. The NTSB said that, most likely, the coil-distributor wire loosened in flight, rendering the ignition system inop, which prompted an unrecoverable loss of engine power.

In another accident, the NTSB cited the installation of a firewall-mounted automotive racing oil filter assembly in a Northman 2+2 that lost power and crash-landed in trees. The builder had installed the specialty filter assembly for ease of servicing. However, the filter housing cracked under vibration, dumping the IO-320’s oil which seized the engine.

Auto engine conversions are manna to the Experimental aircraft builder, and why not? Car engines are plentiful, come with mated-by-design ignition and induction systems, and cost loads less than aircraft engines. Parts are cheap. Best of all, the FAA allows it, as long as the DAR isn’t uncomfortable or unconvinced of its airworthiness.

For these reasons, I conditionally support an automotive engine application to an aircraft. Shoot, I’ve eyeballed the rotary engine approach for some time: Light weight, fewer moving parts, smoother power line…what’s not to like? However, I have neither the expertise nor the talent to prove the reliability of any given automotive engine in an aircraft built by my hand. I’m an amateur, remember? I leave that up to the professionals…and I’m reassured to see how seriously they have taken the serious business of properly configuring automotive engines for Experimental aviation.

Take Titan Aircraft, for example. The T-51 Mustang -scale aircraft features six engine choices from the company web site. Three of those are V6 car engines, each listing for just under $10,000.

However, to complete the auto engine’s conversion, you must also purchase and install a $16,500 firewall forward kit to properly prepare it for aviation use. The FWF kit includes pretty vital stuff like a more reliable ignition system and, most importantly, a very robust and reliable prop speed reduction unit. Without it, the Mustang won’t fly. With it, you have a reasonably safe, reliable, risk-tolerant, and awesome-sounding mini-Merlin powerplant for your Mustang. Just remember: It’s still Experimental. 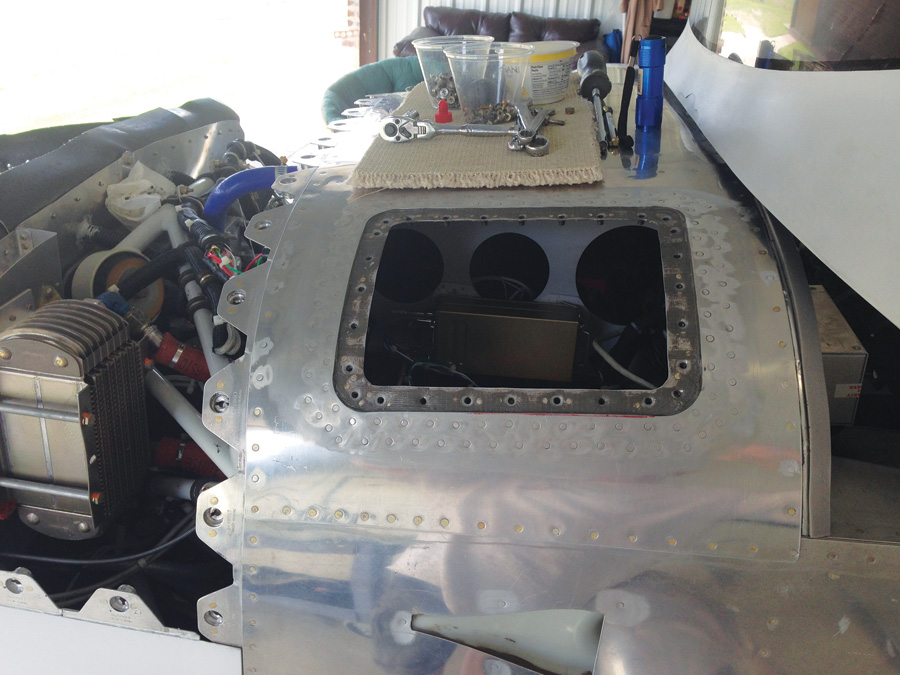 Access panels are common additions to builders’ finished aircraft, and often fall outside the original design. Do your research! Be sure you haven’t compromised key structural designs or introduced some new risk for the sake of convenience.

Bugsy then remarked, “OK, so we built good Experimental airplanes, but now, in Phase 1, are we flying them smartly? Are we taking unnecessary chances in our test plans?” I knew what he was talking about. For instance, I’m about to buy sandbags to conduct heavyweight, forward-, and aft-CG test flights. I cringe at the thought of not battening them down effectively.

Not long ago, another RV-6A pilot launched on a Phase 1 flight to determine the unusable fuel quantity in his right wing tank. He purposefully fed fuel from that tank until the engine ran out of fuel, then he planned to immediately switch to the left tank, a method he had successfully used in the past on other airplanes. However, on this flight, in a turning climb after takeoff, the engine quit and the aircraft stalled. He landed straight ahead in a field with a half-full left tank, but only about two gallons in the right.

There are often many ways to attain data on a given test point. Some of those ways may yield more accurate data than others, but not without risk. To determine unusable fuel in my RV-7A, I pumped fuel from the boost pump into a jerry can at 0 knots/1 G in my hangar until each tank could yield no more fuel. What remains in the tank? About 1.5 gallons of unusable fuel on each side. Might not be the most accurate figure but, to me, it was the least-risk approach.

At this time in our conversation, my bride Kelli walked in, saw the micro (brews), and asked us what world problem we were solving this day. Bugsy described the essence of our conversation on Experimental aircraft risk, which got me a little concerned; I hoped his words wouldn’t make her think I was worried about our newly-airworthy RV-7A.

“Shoot, Sid, I’m ready now!” My bride really knows how to warm my heart…only 32 more hours of Phase I testing to go.

Paul Dye - November 21, 2011
1
The words "test pilot" conjure images of steely-eyed derring-do, but the reality is often a world away from all that.