Up front Jeff LaVelle continued to set the pace, albeit 7 mph faster than yesterday at 384 mph. His Glasair III has been the one to beat all week, and considering the same combination has won Gold races here in Reno well in excess of 400 mph LaVelle seems able to dial in whatever speed is necessary at the moment.

John Parker tagged right along with LaVelle at first, but then no doubt contemplating Sunday’s feature race, settled into essentially the same pace as yesterday at 377 mph

As the race strung well out, David Sterling was far behind the leading duo, but solidly in a lonely third. His new Whirlwind prop was part of a 359 mph pace.

Fourth went to Andrew Findlay at a—for him—lackadaisical 346 mph. We haven’t had a chance to speak with Andrew post-race, but considering his One Moment Racing team was up until 4:30 a.m. last night changing number 6 cylinder, there’s no end of issues possible.

Relentless with Kevin Eldredge on the stick lead the naturally-aspirated Gold racers at 326 mph in fifth, with Bob Mills and alternate Vince Walker finishing at 321 and 300 mph respectively for sixth and seventh.

Vince got to race because Gary Mead, Lynn Fahrnsworth and Peter Balmer all officially did not start. Lynn reported fluctuating fuel pressure;  We were unable to talk to the other two. 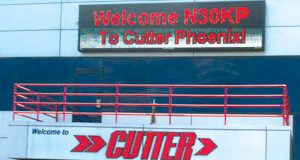