Pre-event publicity for the 2017 Mojave Experimental Fly-In was low-key this year, but that didn’t stop a healthy crop of experimentalists to buzz in for this popular meet-and-greet gathering. Perfectly CAVU, windless weather helped as well.

As always, the 4-hour long MEFI was easy, casual and devoid of commercialism. There’s no public-address system, no aerobatics, no airport closures and no hassles, just a group of aviators ready to check out other’s handiwork and meet the people behind the magazine stories and forum banter.

This year much of the focus was on Bill Beaton and his supercharged Harmon Rocket II. Fresh off our feature story in the May 2017 issue of KITPLANES, Bill, crew chief Ralph Inkster and the red Rocket made the long trip down from western Canada to catch a little warm weather and spread the good word on supercharging Lycoming 540s. Beaton and Inkster have been very open to discussing the details of the supercharged Rocket.

Distant as Canada may be, Bill and Ralph likely didn’t get the long-distance award. That distinction, while not officially observed, more likely went to Jim Davis who came all the way from Ayden, North Carolina specifically to attended the Mojave gathering. Davis even shipped his project engine, a repurposed 3-cylinder Honda outboard unit, which he’s still developing as a logical replacement for the now defunct Rotax 2-stroke offerings.

Friday night saw the 3rd Annual Indoor Free-Flight Event sponsored by the Tehachapi Crosswinds RC club and the Mojave Air & Spaceport, not to mention the model airplane kits provided by Brubaker Models for the build-and-fly competition. This is always a fun event with the sort of free-flight model airplane traffic that would give an AirVenture controller hives.

Saturday evening sees the awards dinner in the same spacious Stu Witt Center the model airplanes barnstorm on Friday night. Dick Rutan was the featured speaker, and Andrew Angellotti was named Experimenter of the Year for his Spingarage air data probe (as featured in the October 2016 issue of KITPLANES).

Mantra for the Mojave Experimental Fly-In is Design. Build. Test. with awards for each category. The Beaton/Inkster duo took the Design award for their supercharged Harmon Rocket effort while Brian, Tyler and Chad Sanders made the Build award a family affair for the jet-powered Schweizer 1-26 glider. The Test award was given to Jake Riley for work with his Danger Jet L-29 Delfin Reflight. There’s also an Effort award as the MEFI culture celebrates initiative and effort, even when the results disproved the stated goal or for works-in-progress. This year Effort went to Jim Davis for his Honda Outboard Motor conversion. 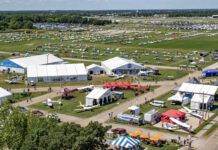 Ed Kolano - November 7, 2010
0
Ground effect, or changes in airflow when flying a wingspan distance above the ground, affects longitudinal stability, elevator effectiveness and possibly even your airspeed indicator. By Ed Kolano.