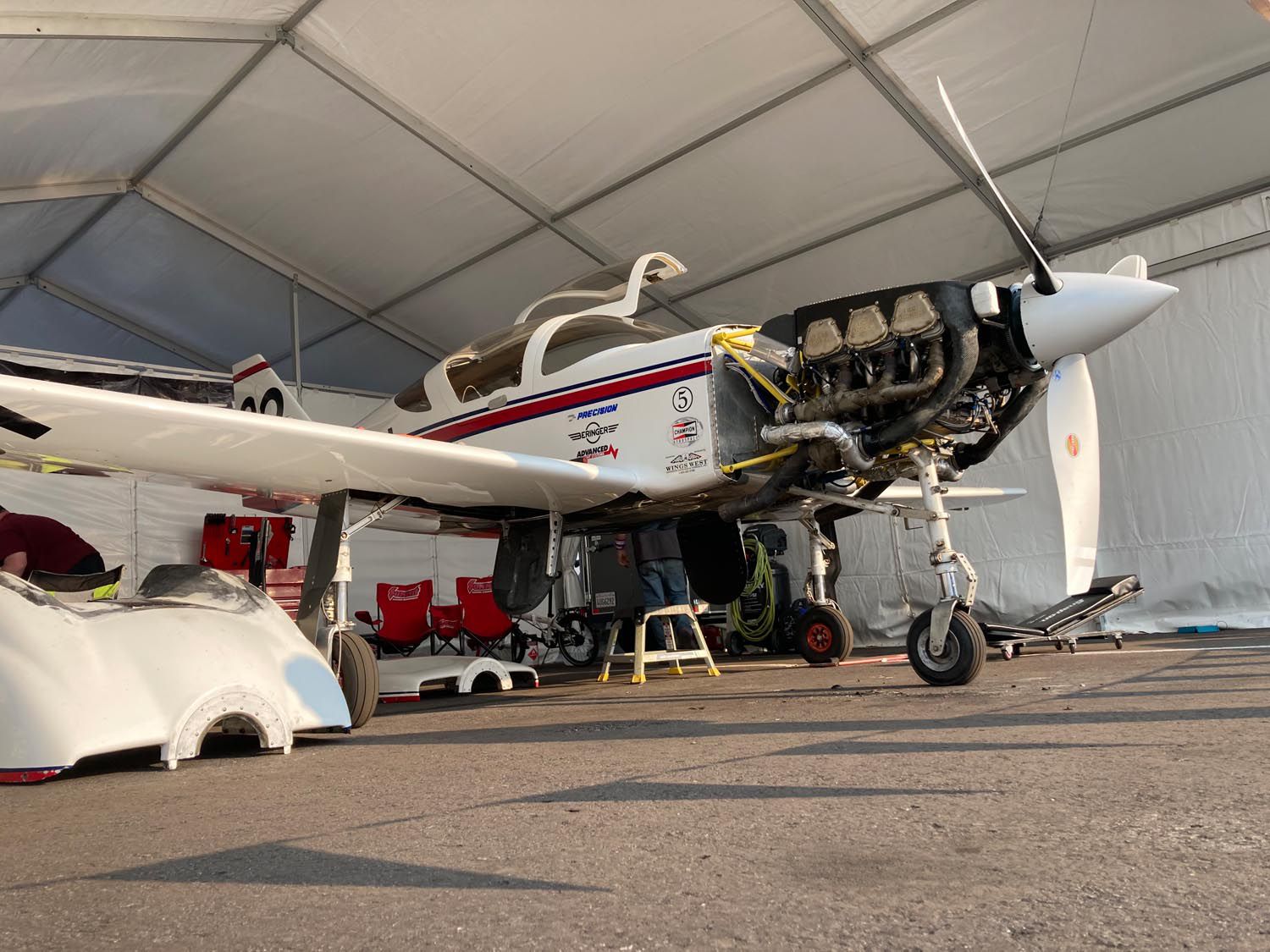 After being coerced into driving to the races this year (weather and can’t miss obligations immediately after so I have to get home) it was good to walk through the familiar pit entrance gate at the Stihl National Championship Air Races in Reno, Nevada.

Nothing was going on, thanks to a blanket of California wildfire smoke which has been randomly taking Stead Field IFR, so the mood was ashtray gloomy. But that also meant a chance to check in with the gang and catch up on qualifying. I got as far as the Sport Gold racers before the smoke cleared out enough to resume qualifying, a good thing as the top of the Sport Gold field had yet to do so and I was wanting to breath something less opaque.

It didn’t take long to see the Sport Gold racers have been holding an engine grenade contest. Unlike last year when mechanical mayhem was at a minimum, the mechanical bits have been proving overly frangible so far this year. Least affected at the top of the heap is defending champion Jeff LaVelle who had nothing more than a nuisance oil leak to attend to. But Jim Rust is out today while he changes a cylinder on his hot-rodded 580-powered Glasair III. The CHT’s had run away on that hole—and only that hole—and a heavily scuffed piston and bore were discovered, hence the jug jamboree.

Andrew Findlay’s story was a weird failure of a turbo center section earlier in the week. Normally one of the more bulletproof parts of a turbo assembly, this one looked like the casting might have failed as the bearing and shaft looked fine, other than the bearing being in several pieces and the casting supporting it looking rather guilty. The One Moment Racing crew put things temporarily right by refitting the 2018 turbo system so Andrew could put the Stihl-sponsored Lancair in the show. New turbos were being shipped to Reno when we checked in, so it’s likely the popular orange and white speedster could return to its latest turbo arrangement by the Gold race on Sunday.

Far worse is poor Karl Grove. A completely one-off connecting rod failure yesterday (incorrect heat treat) took out that cylinder, then punched a hole in the opposing cylinder and spread debris throughout the engine. A good size trash fire manifested itself out the tailpipes as hot oil got where it wasn’t supposed to be and Karl did an excellent job under pressure to immediately land the now dead stick Lancair on the runway then below him. With the prop flat in low pitch the deceleration was tremendous and Karl’s approach was short and sharply downhill. It meant a high-speed entry onto the thankfully long runway, but braking was sufficient to end the flight with no further damage.

This engine loss is particularly disappointing. The liquid-cooled AC Aero/Lycoming engine was being brought up to meaningful power levels for the first time, indications were very good (331 mph lap speed) with plenty more left to go and we were anticipating a new, mechanically significant contender in Sport Gold. The broken connecting rod is just one of those things; post-incident testing showed it was soft, with below specification heat treat so it was a supplier issue. This is just the sort of failure that’s impossible to see visually and causes maximum damage. Too much debris has been circulated through the engine to heroically salvage it in time to race and there is no spare engine in the pits, so Karl has been forced out for this year. Luckily the engine case was not damaged so repairs are going to be much easier to take than they might have been.

Yet more carnage was found in the Thunder Mustang hangar. Mathias Haid traced a small coolant leak to a cracked cylinder head and has at least one soft cylinder in his V-12, while partner Peter Balmar also maydayed off the course with low oil pressure, unavoidably landing short and pranging his airframe.

As the morning progressed LaVelle got on course and turned up the wick big time, while Findlay seemed to be in more of a get-acquainted mood (these were his first laps in anger this year). Rust will start in the rear of the Gold heat races and work his way up while we’re not sure if Mathias Haid is in the hunt. We did see his racer being towed out to the runup area, an excellent sign.

So far Sport Gold is lined up for its heat race thusly:

Tomorrow we might have some indications if anyone can catch up to the speeding LaVelle. He’s already turning race-winning speeds from last year so he’s the man to beat so far.

Lisa Turner - July 20, 2018
0
Should you install one on your ultralight or experimental?

Jim Weir - December 7, 2010
0
Transistors don't like excessive heat, but there's a way to beat it: an engineered heat sink.

Kitplanes - December 4, 2021
0
The pointy, provocative nose of the Berkut punctuated our heavily processed cover this month....