We got to Reno-Stead early this morning so that Jeff could make his mandatory 7:45 A.M. Sport brief. I ran into Mark Voss, Andrew Findlay’s engine guy, and asked how Andy’s turbo situation is going (Andy blew a turbo on the way—his team’s been busy!) Mark asked how we were doing and I told him I didn’t feel good because we were off to an unusually calm and quiet start.

Sure enough, my gut was right—stillness at Reno usually ain’t good. Come 10:30 A.M.  I received word we’d over fueled Race 39. Jeff wanted 24 gallons total, not 24 gallons added (He’s only filling the right wing by the way). I called Jim Cassidy, the Reno Air Racing Association’s Ramp Chief, to request not only a de-fuel, but a run up. Jeff’s mechanics changed some gaskets on the oil fittings last night and wanted to do a final leak check.

I’ve had Jim Cassidy’s number saved in my phone for six years now and wondered if I’d ever need to use it. It’s a phone number they share every year during our mandatory crew chief brief. Today was the day! I flagged down a tow guy and directed him to take Race 39 toward Jim’s truck on the ramp. I heard Jeff yell, “Ari, get fuel cans!” so I took off running and quickly gathered one from Andy’s dad, Scott Findlay, and another two from the Thunder Mustang crew in their hangar, which we all refer to as the “Thunder Dome.”

Scott escorted me and my mountain of five-gallon fuel cans to Race 39 in his Polaris Ranger. Thanks for the lift, Scott! Jeff did a run up and one of his mechanic’s began de-fueling as soon as he was done.

The reason for the rush? We thought we could potentially make the 1:25 start time so that Jeff could qualify. We also wanted to get out of everyone’s way! Sport Bronze and Silver were lining up and we were right in the thick of it (with permission, of course).

I got Race 39 back in the pit and Jeff immediately sent me to Summit Racing for some conical seals, which form around imperfections in the flare contact surfaces to make a good seal. The mechanics found a small oil leak post run up. A quick repair, but not ideal. Jeff didn’t get to fly today, but 39 is all buttoned up and ready to go for tomorrow’s early qual slot. 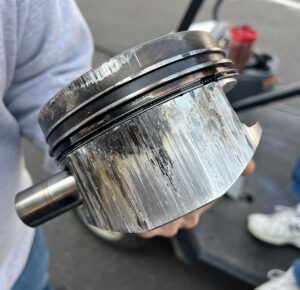 In other news, Jim Rust’s Glasair III, Race 24, stuck a piston on the number six cylinder during a qualifying attempt today. He mayday’d and had a successful emergency landing. He and Robbie Grove are waiting on a new cylinder. They were able to call Kenny at Ly-Con and have him overnight it—one of the magical things that happens during race week. Most people can’t get cylinders that quickly.

Jeff, Jim and Andy all hope to qualify tomorrow. Now it feels like Reno!

Mel Asberry - August 10, 2010
0
When do service bulletins have the force of law with regard to Experimental/Amateur-Builts?