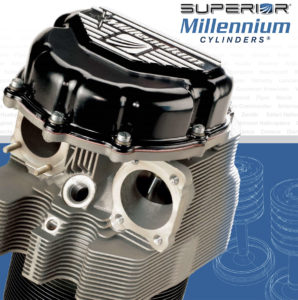 Superior’s reintroduction of the popular cylinders gives owners of classic 1940’s era Piper Cubs, Aeronca Champions, Ercoupes, Taylorcrafts and other types a much more reliable and cost-effective alternative to rebuilding worn out cylinders.

“The reintroduction of the Superior A65 cylinder is in direct response to countless requests from aircraft owners and engine shops to bring this popular cylinder back into production,” Hayes said. “Owners of many classic Continental-powered aircraft are spending tens-of-thousands of dollars restoring these great airplanes only to be faced with the problems of rebuilding cylinders that should have been retired years ago.”

“For a list price of $5,895, engine rebuilders get everything they need to assemble four, factory new cylinders at a price that is in-line with the cost of doing a first-class overhaul of legacy OEM cylinders – if they can still find them,” he said. “With the reintroduction of the new O-170/A65 cylinders, Superior continues its fifty-plus year commitment to making flying safer and more affordable.”

“With nearly three-quarters of a million Superior Millennium Cylinders delivered, they are by far the most popular brand of FAA PMA’d aftermarket cylinders for Lycoming and CMI engines,” Hayes said.

Paul Dye - June 6, 2022
0
Aviation, especially Experimental aviation, carries along with its benefits an intrinsic risk that is hard to completely dismiss.

All About Avionics: We Came, We Saw

Stein Bruch - August 16, 2008
0
There are seemingly few more mundane tasks than making holes, but there are as many ways to do them, as there are different sizes and shapes of holes. This month, Stein Bruch describes how to cut holes in the panel yourself, using tools you may already have around the shop.