Last month we continued our discussion of Center of Gravity (CG) with a look at how the configuration of the airplane, and in particular the position of the engine, affects the CG of the airplane. Having dealt with the fixed components of the aircraft, we now turn our attention to how the contents (crew, fuel, passenger, cargo, etc.) impact balance.

Both the empty weight and empty CG of the airplane are fixed and do not vary from flight to flight. The same cannot be said of its contents.

Each time the airplane flies, it carries some combination of crew, fuel, passengers, and other payload such as baggage or cargo. These all affect the weight of the airplane and the position of the CG.

The airplane must be safely flyable with the CG at all possible in-flight positions. This safety is ensured by a combination of the design of the airplane and the weight and balance limits set forth in the airplane’s pilot operating handbook (POH). Designers strive to create airplanes that are relatively tolerant of differences in loading condition, and pilots are trained to do weight and balance calculations to ensure that the airplane is loaded within its safe limits before taking off.

Loading any item into the airplane causes the CG to move toward that object. The heavier the object is, the greater the effect on CG will be. Since the CG moves toward the load, the farther the load is from the CG, the more the load will move the CG.

These two factors are the primary considerations in determining how the contents of the airplane will affect the CG. 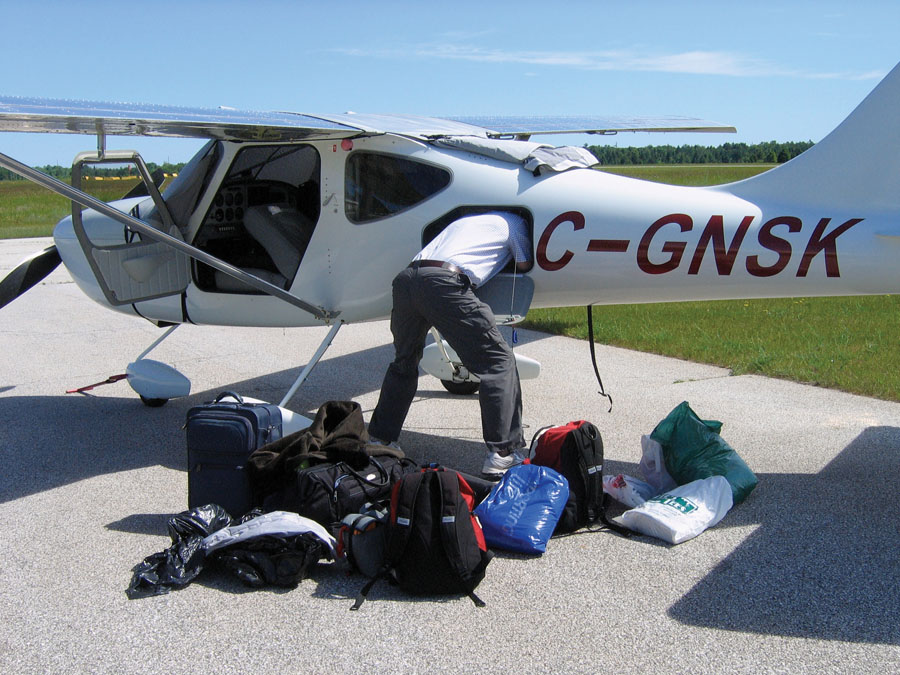 Steve Sutton loads up the GlaStar that he and his wife Kathy built as they prepare for a cross-country flight. To keep the CG within limits, he places heavy items forward in the spacious baggage area and light items farther aft. (Photo: Kathy Sutton)

CG travel is not desirable in an airplane. The wider the range of CG positions the airplane must be able to fly at, the larger the tail must be to provide the stability and control power needed to tolerate the CG travel. Airplanes with large CG ranges can also have very significant differences in flying qualities depending on how they are loaded. This can sometimes be a problem, particularly for airplanes that are rarely flown loaded to the aft edge of their CG envelope. Such an airplane may become much more sensitive in pitch and easy to stall inadvertently for a pilot who is used to its characteristics at the more common, more-forward CG. This change in flying qualities can catch an inexperienced pilot off guard.

In this idealized situation, changing the loading of the airplane would change its gross weight but not its CG position. In the real world, this ideal situation is essentially impossible to achieve, but it serves to illustrate some important concepts.

When an airplane is loaded, the CG starts at the empty CG, and then moves as load is added. The closer the empty CG and the CG of the individual loads are together, the less the CG will move as load changes. It is highly desirable to have the empty CG be within the safe CG range for flight and then have the centroid of the variable loads also be within the allowable CG range. Once again, this is not always possible for every load, but it’s a good goal to keep in mind.

Strakes added to the VariEze’s wing roots provide volume on either side of the fuselage to carry fuel near the desired CG. (Photo: Mick from England [CC BY 2.0 (https://creativecommons.org/licenses/by/2.0)], via Wikimedia Commons)

In getting an airplane to balance, we must consider two types of loads.

Fixed mass: The first type of load is comprised of objects that, once they are loaded aboard and secured, have constant mass and do not move. These include crew, passengers, baggage, and other fixed cargo. These items move the CG when they are loaded aboard, but do not cause any change in the CG in flight.

Variable mass: Some items either change weight in flight, or are dropped in flight. The mass of fuel aboard the airplane decreases steadily over time (as long as the engine keeps running), and some airplanes have droppable payloads that leave the airplane all at once when they are released. These items not only move the takeoff CG when they are loaded aboard, they also cause the CG to move in flight due to the change or sudden departure of their mass.

It is critically important to ensure that these in-flight mass changes cannot move the CG from a safe position at takeoff weight to an unsafe position later in the flight.

This is of particular concern when designing fuel tankage. Fuel can be a large percentage of the takeoff gross weight, and its mass decreases as it burns off in flight. The airplane must be safely flyable at any fuel state from full tanks to empty. During the layout of the airplane, the designer should do multiple CG calculations, taking into account fuel states from empty to full and the possibility that fuel might be in any combination of tanks in a multi-tank configuration. It’s not uncommon to design multi-tank systems that burn in a specific sequence to control CG.

Ideally, all of the fuel should be placed within the allowable CG range (ahead of the aft CG limit and behind the forward limit) so variations in fuel state cannot move the CG to an unsafe position.

Getting the centroid of the fuel near the flight CG is one of the primary concerns when laying out a new configuration and is often a problem with unconventional configurations. In the fuselage, the cabin occupies the volume centered on the flight CG. Since the fuel can’t (or shouldn’t) occupy the same volume as the people, fuselage fuel tanks will typically be either ahead of or behind the cabin. These tanks will cause significant changes in CG as their contents vary.

For fuel tanks aft of the cabin, the primary concern is that filling them moves the CG aft. We must ensure that even with the tank full, no reasonable combination of pilot, passenger, and baggage weight can lead to the CG being behind the aft limit. The one saving grace of this arrangement is that the CG will move forward as the fuel is burned off. This means that as long as the CG is within safe range on takeoff, the CG travel caused by fuel burn is unlikely to lead to an unsafe condition.

Another common position of a fuselage fuel tank is the so-called “cowl tank.” A cowl tank fits between the firewall and the instrument panel, and usually has its floor just above the feet of the pilot and front-seat passenger. Cowl tanks can be attractive either as header tanks for low-wing airplanes, or as the single fuel tank on an airplane where the designer does not want the complexity of incorporating wing tanks. The problem with cowl tanks, particularly if they are used as header tanks, is that burning the fuel from the cowl tank causes the CG to move aft. Accordingly, it’s possible to take off with the CG within the safe range and have it migrate aft of the aft limit as the cowl tank fuel burns off. The trap some designers have fallen into is treating the fuel in the header tank as reserves and assuming it will never be used. This caused problems with some of the earlier “fast glass” low-wing kit airplanes when pilots discovered that under certain loadings conditions, they could not use their “reserve” fuel without moving the CG so far aft that the airplane became difficult to control in pitch. The reserve fuel was not really useable fuel since it could not be safely burned in flight. Instead, it was essentially flammable ballast.

For conventional aft-tail airplanes, the phenomena just discussed are the reasons designers generally prefer to put the fuel tanks in the wings. For most airplanes there is ample volume within the wings to carry the fuel with its mass centered within the allowable CG range of the airplane.

This can be a problem for unconventional configurations, particularly for canard and tandem-winged airplanes. On a canard, the flight CG is ahead of the main wing and far behind the foreplane. Conventional wing tanks don’t work well here because the CG of the fuel would be behind the flight CG, and it would be difficult to make the airplane balance at all fuel states. The solution to this problem, pioneered by Burt Rutan on the VariEze and now widely imitated on other canard airplanes, is to add strakes to the wing roots that provide volume on either side of the fuselage near the desired CG to carry the fuel.