Electrical gremlins can be tough to track down. This month’s case involved a non-builder owner of a fairly new RV-8, and it took us a few tries to figure out the real root cause of his electrical issues. As with most difficult problems, sometimes there are red herrings that lead you to believe you found the smoking gun, especially when the problem is intermittent.

The owner was having problems with random electrical circuits going offline. It was a nice glass cockpit, with a VPX electrical system. The LEMO headset circuit would fail when taxiing out to the runway, the rpm indications were sometimes erratic, and the radio would intermittently key for transmission. The owner had already removed the VPX and sent it back to the factory to be checked. Of course, it came back NTF (no trouble found). With the problem still persisting, the owner asked us to take a look.

Initially, we found some chafing at both the headset wiring and the mic switch on the throttle, along with some missing grounds on the P-MAGs. Since all of those findings would create the symptoms, we were pretty confident we had found the problem.

Well, victory was short lived, as the owner again said electrical circuits were continuing to fail, both on the ground and in the air. Not good, especially in a glass cockpit. So, back to the shop and we very carefully looked over all of the wiring specific to failing circuits, as well as all of the main battery connections and all of the VPX connectors. Again, we found some potentially loose connections and some wire that could have been supported a little better. After cleaning up some of the wiring we hoped for the best, albeit not with a lot of confidence.

Sure enough, the problems continued. It was at this point that I asked the owner if I could fly the aircraft. With a hearty “yes” from the owner, I preflighted and proceeded to start the aircraft. Bang! It was like a big rubber mallet hit me in the head.

If you’ve never experienced a really quiet electrical system, then one with alternator whine might seem normal to you. It is sometimes even prevalent in older aircraft that don’t have proper grounding, so many pilots are just used to it. In this case, it was horrendously loud to me, and I was very sure that one or more diodes had failed in the alternator. I did in fact see some circuits drop offline, both on the ground and in the air. I reset them and I turned off the alternator. Woo-hoo! No more failing circuits.

For those of you who are really technical, after I landed I did check for ripple current on the electrical system by using a voltmeter set to AC volts. It was quite large with the alternator running. A good alternator should have a nice steady DC voltage, with minimal ripple current. We replaced the alternator and the aircraft has been fine ever since!

So what are the lessons learned? First, for those of you who are now wondering about your alternators, the whine will be heard as a noise that actually gets higher in frequency as you move the throttle from idle to a higher power setting. It will be especially prevalent with high loads on the electrical system, such as right after startup when the alternator is trying to replenish the battery and supply power to everything else at the same time. A quick turnaround on a hot day after a fuel stop places the most stress on the diodes, of which there are usually six. The alternator is now heat soaked, and heat is the worst enemy of solid-state electronics such as diodes. I’ve always recommended a cooling blast tube to the alternator for this very reason, even though some manufacturers say a blast tube is not necessary. Sometimes you can also notice the whine through the intercom when speaking into it.

Getting past the smoking-gun component, the bigger lesson for all of us is that sometimes it is better to try to duplicate the problem by either watching or operating the unit yourself, if able. We’ve learned now that when we run up the engines at the start of the condition inspection in order to warm up the oil for draining, it is also a good idea to power up everything else and see how it all works together.

The funny thing is that older airplanes with steam gauges will work just fine, even though an alternator may have one, or even two, failing diodes. You can hear it in the radio when you key the mic. However, our newer glass cockpits with all the electronics really like a nice, clean electrical system in order to work properly.

I bet you will be listening a little differently the next time you go flying! 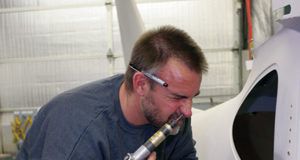