Ground loop: a sudden departure from the desired direction of horizontal travel when an aircraft is rolling on the ground. Ground loops can occur at any time, but they usually occur when landing a conventional gear (tailwheel equipped) aircraft. The aircraft will depart the desired direction, and in some cases a complete 360 turn will be the result. More extreme ground loops can result in dragging a wingtip on the runway. 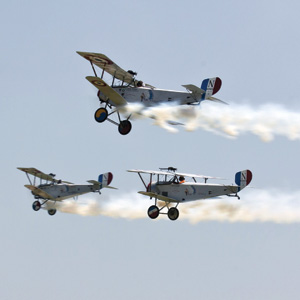 We in The Dawn Patrol have all experienced sudden and exciting departures from the desired direction of horizontal travel when landing our nimble little 1916 Graham Lee Nieuport 11 replicas. We call them Whifferdills. In our minds, its not a real ground loop unless you drag a wingtip on the ground.

Which leads us to our latest adventure. For the past 18 years we have been invited to the annual Salute to Veterans Air Show held at Columbia Regional Airport just south of Columbia, Missouri. This is the largest free airshow in the U.S. and is dedicated to the men and women of our armed forces.

Sometimes the weather has been horrible, and we only display. Sometimes we get to fly for the crowd. At other times, we’ve actually helped out Kevin Nowack, the Air Static Boss, by being the only planes that can fly due to very low ceilings. (Nowack calls us the stop leak airshow guys that can buy time while they’re waiting for the clouds to lift so the big boys can fly. His other job is an Army Chief Warrant Officer Four (CW4), in the Missouri Army National Guard, and hes an Instructor Pilot Supervisor.)

Anyway, this was a banner year for us. The convoy of six planes to Columbia didn’t have any flat tires like last year, and we got to fly twice both days of the show, which rarely happens due to weather.

We opened the show at zero-nine-thirty with a salute to WW-I aviation and again at twelve-hundred while the Canadian Forces Parachute Team, The Skyhawks, were clawing up to altitude for their jumps to open the show.

Saturday morning winds were light and right down the runway. While this is a good thing, it doesn’t mean The Dawn Patrols show wont be memorable. 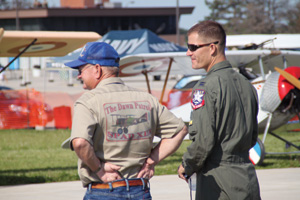 First, we were landing on pavement. Second, the runway is 150 feet wide. Were used to a grass runway thats 50 feet wide. This year, these two factors led to some real Don’t look, Ethel moments. (Tom Glaeser, Mark Pierce and I have all had our fleeting moments of fame in front of the crowd. Whats worse, they have all been recorded on thousands of video cameras.)

Back to the landing on pavement factor. Landing a short-coupled taildragger such as any WW-I aircraft is a challenge in any circumstance. Landing on pavement just adds more zing to the experience. Grass is a joy! Gravel is OK. The wheels will slide on grass and gravel, but they just grab ahold on pavement. You have to be going straight down the runway and keep your head out of the cockpit so that you can anticipate any swerve that might develop on rollout. Landing with a tiny amount of sideways drift (that you wouldn’t even notice on grass) will suddenly make you wish you were not in front of a crowd of thousands eagerly watching you screw up.

All the Worlds a Stage

This year there was a record crowd at Columbia Regional Airport. More than 30,000 people had come out to see the USAF, USMC and USN big iron strut their stuff. Then there we were, the paper clips trying to strut our stuff. 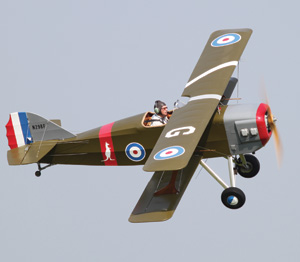 Jerry Guyer in his Boredom Fighter with its Australian colors makes a pass by the crowd.

My wife, Sharon, was flying her Airdrome Aeroplanes Morane-Saulnier Parasol on pavement for the first time. Shed flown great at the U.S. Air Force Museums biannual World War I Rendezvous, but that was on a big, wide grass strip. All of us had tried, in a gentle, non-threatening way, to warn her to keep her head up, land as straight as she could and stay on those rudder pedals.

Conditions for the first flight were pretty good. We were using runway two-zero and the winds were one-eight-zero at 8. The runway is so wide and we get off the ground so quickly, we all were going to make diagonal takeoff rolls right into the wind. No problem.

We were all staged and ready to be turned loose by Nowack. He came by for a final ramp check and cleared us to fly. Nine-thirty rolled around and he told us to climb in and light em up. Hot dog! We had a good crowd flying this time: four Nieuport 11s, a SPAD XIII, a Boredom Fighter and the Morane.

Everyone got the engines started except for Pierce, who broke his chainsaw starter rope on the first pull. This resulted in a roiling little cloud of purple language erupting from his cockpit. But again, this was no problem. His brother ran up and gave the prop a flip, and that little booger started on the first try. I was amazed. For some reason the aviation gods wanted us to fly. Later we found out they had big plans for Sharon’s first experience with landing her hot little warbird on pavement. Yes, sports fans…the moment had arrived. Her time in the spotlight had finally come.

We all waddled out to the active and got lined up. The tower came on over the radio, Dawn Patrol, the air is yours!

Yee haw! Away we went. Everyone got off fine, and for the next 30 minutes we had a ball flying a tight left-hand pattern over the field. The tower operator had talked to me during the pilot briefing and requested some close smoke passes for a bunch of professional photographers shooting stills and movies from the catwalk. After wed all gotten settled in the pattern I got on the radio and said, Tower, this buzz is for you.

Then we made close-in smoke passes by the tower. The photographers were so excited I almost expected one of them to fall off the catwalk.

Finally, the Air Boss got on the radio and told us to start to recover. Everyones pucker-factor went up a notch or two. All pilots know its a proven fact that you can make numerous perfect landings when no one is watching. But let one person show up at the airport, and you’ll bounce one in higher than the hangar roof.

There were more than 30,000 people watching. This made what happened next almost a sure thing. I landed first and made a classic seven-point landing. I was all over the place. (Please note: A point is a single contact between a wheel and the ground.) Then Glaeser topped me with an 11-point landing. The guy that was staged in the P-51 Mustang was laughing his head off as we went bounding by him.

Pierce and Dick Lemons landed with no problem. So did the SPAD and Jerry Guyers new Boredom Fighter. Then here came Sharon down final like she was on rails. It was a perfect approach. She made a perfect, straight-as-a-string wheel landing. It was beautiful.

But…she landed hot, and while she was still rolling at a good rate of knots, she hauled back on the stick to plant the tailwheel. Normally this works fine, but when you’re still at flying speed, hauling back on the stick pops you right back up in the air.

The resulting Whifferdill, do-si-do, wing-rocking, almost-dragging-both-wings-on-the-ground, off-in-the-grass, around-a-runway light and back-onto-the-runway extravaganza was a delight to the eyes. As soon as she got settled down, the tower got on the radio and said, Were going to have to count that as two landings.

We all taxied in together with Sharon bringing up the rear. The C-130 Hercules was right behind us, and we could hear its engines over the throaty roar of our own little powerplants. When we reached our parking area on the flight line, all of the engines were shut down and deep breaths were taken by all. Sharon taxied in last to be greeted by a cheering throng of pilots and ground crew. One of them was even thoughtful enough to bring her a roll of paper towels, Just in case. 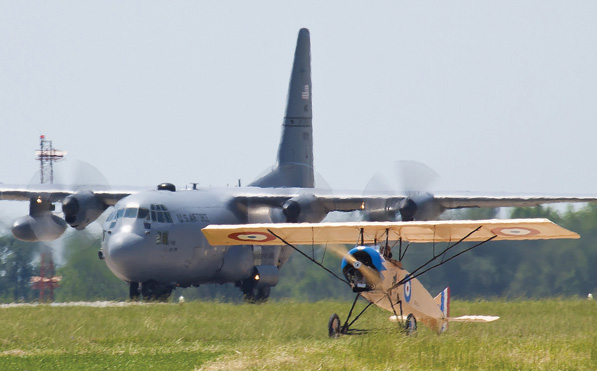 Being chased by the C-130, Sharon Starks heads back to the ramp after her memorable landing (the video is available).

I did mention that we had a SPAD in our group this year. It is a beautiful replica built and flown by Marvin Berk of Louisburg, Kansas. However, for this first flight at the Salute to Veterans, he wasn’t flying it. Unbeknownst to us, he had a ringer flying his SPAD.

The pilot flying the A-10 Thunderbolt demonstration at the show was Captain Joe Rifle Shetterly of the U.S. Air Force. He and Berk go back to 1995 when then 16-year-old Shetterly was learning to fly. His dad taught him and his mom to fly in a Citabria. Besides hundreds of hours in the Wart Hog, including a tour of duty in Afghanistan, Shetterly now has hundreds of hours in taildraggers. The two of them got together the Friday before the show and were talking old times. Berk asked Shetterly if hed like to take the SPAD for a spin, which was a no-brainer. Shetterly had a great time and the upshot was that he would fly the SPAD for The Dawn Patrols first flight Saturday morning. 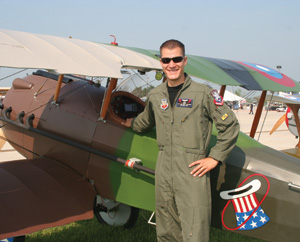 Captain Shetterly poses with Marvin Berks SPAD replica after a most successful flight.

I didn’t know any of this. I did notice a tall, good-looking pilot in a flight suit joining in the Air Bosss ramp check before the flight but thought nothing of it.

It wasn’t until wed landed that I realized that a hard-as-nails, kick-butt-take-names A-10 Wart Hog driver had been flying with The Dawn Patrol. What a deal! He stepped back and forth between the two planes as if it was a normal day at the office. This was a first for us, and we all felt kind of special afterward. Wed had a real pilot as part of our WW-I demo team.

The other new display we unveiled at Columbia was my replica 1916 WW-I British Trench Cat front-line dispatch motorbike with sidecar. It has already proven its worth in getting our tired feet around the field at airports. 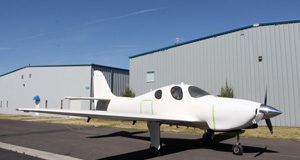