“Sharon’s in the beans!” someone yelled from the other side of the hangar. There was a crowd of us helping Harvey Cleveland wipe all the oil off his Piel CP-750 Beryl. He had taken “Sabre” Ron (a Vietnam F-100 pilot) for a ride in the Beryl, and just as they were entering the pattern to land, the crankshaft freeze plug let go. 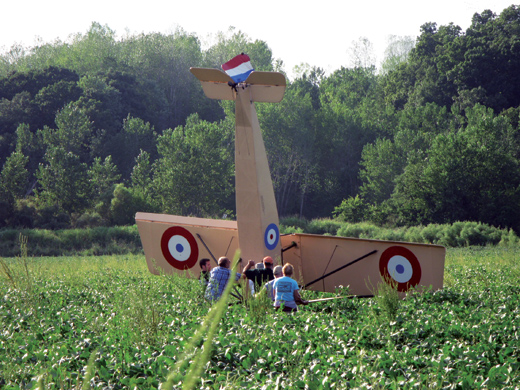 Sharon Starks (in blue) watches as the Hero Squad gets the Morane back on its “feet” in the beans. The mud in the field was ankle deep.

The resulting spray of oil from the front of the plane had coated the plane and Cleveland with a shiny patina of oil…not to mention the poor sucker in the back seat…”Sabre” Ron really got soaked.

The landing was a non-event, even when you considered that Cleveland had to slide the canopy back and stick his head out in the fine mist of hot oil spewing from the front of the engine to see to land the plane. But all went well and the plane cleanup was in full swing when we heard the yelling about my wife, Sharon’s, wifferdill.

That hair-standing-up yell stopped the plane-wiping-down in a split second. We all thundered around the corner of the hangar to see Sharon’s Morane wheels up in the soybean field beside the runway. (“Wheels-up” meaning Sharon’s beloved little Airdrome Aeroplanes Morane Saulnier “L” replica was upside-down in the beans.)

What was more worrisome was that Sharon was nowhere in sight. I started running toward the upside-down plane with the rest of the thundering herd. As we pounded along, the thought, “How does that damn dishwasher operate anyway?” ran through my mind.

Then, like a jack-in-the-box on speed, Sharon popped up out of the beans beside the plane. She was jumping up and down, yelling and waving her arms to show she was OK. I stopped running and gave a great big sigh of relief. Then I rejoined the crowd of onlookers heading our way. It turns out the delay in her getting out of the upside-down plane was because she was trying to figure out a way to fall out of the cockpit and not ruin the center section of the wing. The only injury she got was a small cut on her ankle from catching her leg on something in the cockpit when she fell out. 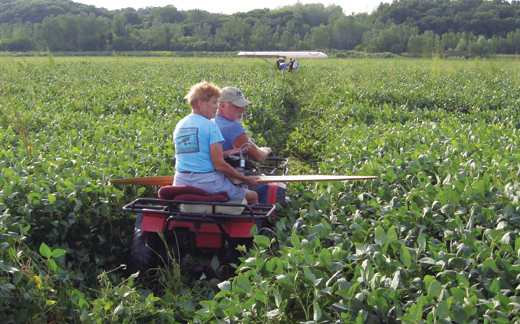 Jerry Sharp brings Sharon back to the runway through the muddy field. She is holding the unbroken prop attached to the broken PSRU mounting plate.

So we all started flying and enjoying the late afternoon cool weather. The wind had started to kick up a bit and was continually shifting from down the runway to a pretty stiff crosswind. Nothing we couldn’t handle…then.

I’d been up in my Nieuport with Tom Glaeser, making smoke passes down the runway for the mob sitting in chairs by the hangar burping fried green t’maters, fried dill pickles, and fried green and red peppers. Mark Pierce and Harvey Cleveland were giving rides in Mark and Tom’s ’48 Champ and Cleveland’s Mariner Amphibian. Cleveland was taking his passengers over to the Missouri River, landing for a short drift down the river and then coming back to pick up another passenger. The flying was just swell.

Ron Rollins had been giving rides in Cleveland’s two-seat Star Flight, but the capricious winds finally made him shut down; the Star Flight is not a lot of fun to fly in gusty conditions. You can run out of rudder and aileron quickly while you’re getting hammered by a big gust of wind. 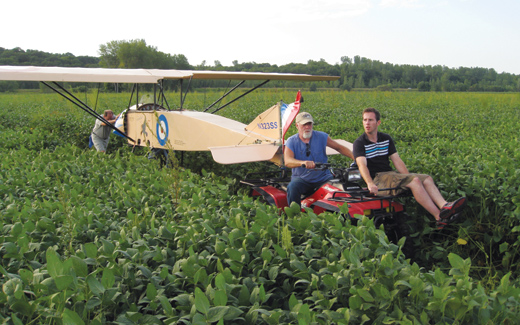 Heading out of the beans, Sharp tows the Morane out of the field. The first responder is riding on the front of the ATV to give the front wheels some traction in the mud.

Now, for you “Big Iron” pilots (C-172s and the like), a scaled-down WW-I replica like our Graham Lee Nieuports and Sharon’s Morane are lightweight aircraft. They all lift off at about 35 mph. With an empty weight of about 400 pounds, 5 gallons of gas and a 125- to 175-pound pilot, they are very susceptible to thermals and crosswinds, particularly on take-off. Landings not so much. You’re usually going quite a bit faster when you’re passing over the threshold than you are on lift-off.

Just as Sharon got the tail up, onlookers noticed the flags around the airport and the wind-sock shifted 90° to the runway and stood straight out. From then on, as our most experienced pilot, “Hollywood” Harvey Cleveland, said, “When you get blown off the runway that fast, with not enough airspeed and a big field of 3- to 4-foot-tall soybeans in front of you…you’re just a passenger.”

Sharon was waaay behind the power curve as she wallowed through the air for 100 feet or so and then, in a level attitude, sank into the beans.

Now, I’ll say this about a good “stand” of green leafy soybeans: They make a heck of a crash safety barrier. The gear hit first, got snagged by the beans, and over she went. The beans cushioned the impact so much that she didn’t even break the prop. The axles were bent at the gear. The cowling was a little bit munched. She’d need a new vertical fin and rudder, but that was it.

Out of the Soybeans, On to the Repairs

Back to the event. The world-famous Liberty Landing International Airport Rapid-Response Aircraft Retrieval Team erupted into action. (Jerry Sharp roared up on his Honda four-wheel ATV, which gets used a lot!) 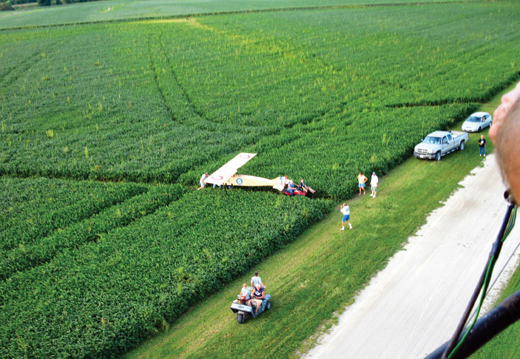 Getting back to the runway. The couple at the end of the row of destroyed soybeans are the airport owners, Buddy and Carolyn Raasch. They would not accept payment for the destroyed plants and said they were just grateful Sharon hadn’t been hurt.

Sharp drove to where Sharon was standing beside the plane. A group of about four other hearty individuals had already arrived on the scene and gotten the plane standing right-side-up on its gear. The wheels still turned, so with the tail hoisted onto the rear of the ATV, the plane was slowly towed out of the beans and taken to the hangar.

The mangled rudder and fin were removed. The undamaged wheels were removed and the bent axle slid out of the gear legs. The munched cowling was removed, and the rivets holding the cowling nose bowl to the really mangled side sheeting drilled out. The stage had been set for the repairs to start.

Then the recount of the whole event started. Sharp had watched it all happen from his patio. He is one lucky slob to be able to live at the airport—he sees a lot of action when he’s not flying his Avid Magnum. 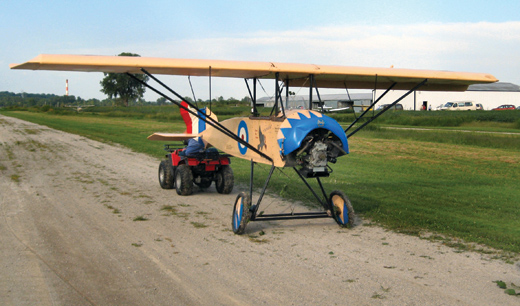 Down but not out, the Morane heads back to the barn. Bent axles, mangled cowling, messed up rudder and fin, but it shall return.

He said that Sharon had full right aileron in and was applying right rudder when the savage gust blasted her off the runway. Like Cleveland said, from then on she was just a helpless passenger. Sharp said, “As soon as I saw what was happening, I knew that Sharon wasn’t flying the plane. She doesn’t do weird stuff like that.”

A quick poll of all the pilots standing around her revealed that out of the seven pilots there, only one, Mark Pierce, had not made a “wheels up” landing in the various grain crops of Missouri. Most were soybeans. I was the only one who had ever sunk into a field of 8-foot-tall corn. But that’s another story. One pilot had been “wheels up” three times.

As Tom Glaeser said, while patting Sharon on the shoulder, “Stuff happens, Sharon. Been there…done that myself.” 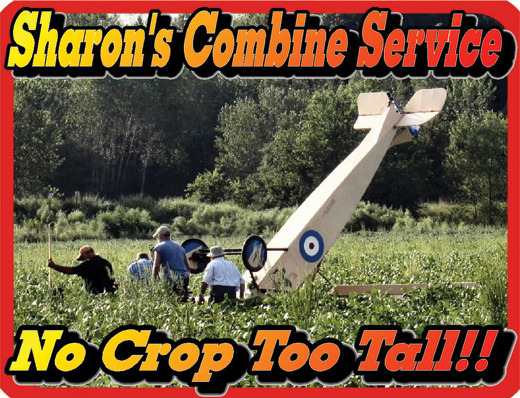 No one is safe at Liberty Landing International Airport. Two days after the “adventure in the beans,” this graphic appeared on a T-shirt.

So, as I type this in the wee hours of the morning, we’re getting ready to start the repairs. Step one is to start buying whatever parts need to be replaced.

One last thing. One member of the crowd at the airport asked Sharon if she was going to stop flying after this event. She looked at him like he’d spoken in a foreign language. He obviously didn’t know Sharon Starks. All she wants to do is get back on the horse that threw her.

As usual, the repairs start with a roar, and the adventure continues.

Kitplanes - November 3, 2021
0
Faithful KITPLANES® readers who picked up our April 2007 issue might be forgiven for...