Some so-called accepted aviation wisdom might benefit from a little critical examination. How about this one: Any landing you can walk away from is a good one. We’ve all heard it, but after I walked away from an upside-down airplane in a 40-acre field of 8-foot corn, I didn’t think the landing was that good. It took six months to get that airplane back in the air. (See KITPLANES® April 2004, “Corn On The Taube.”) 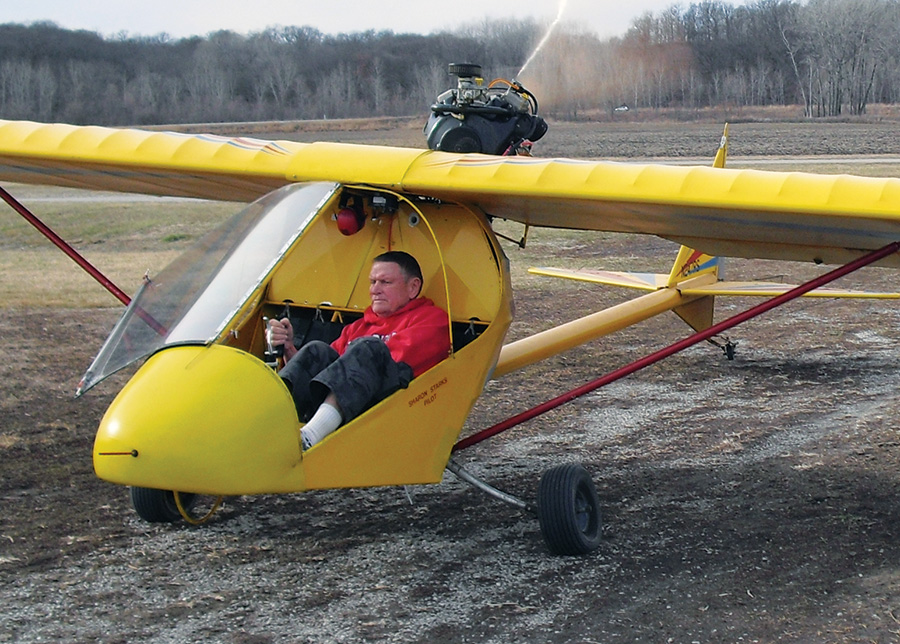 Dick Starks taxis in with a bent gear leg, steeling himself for abuse from She Who Must Be Obeyed.

Another favorite of mine: The quality of the landing is inversely proportional to the size of the crowd watching. Now, I’ve proved this rule many times. During the past 30-plus years of flying, I’ve made hundreds of greaser landings. Not one person has seen any of these. But I’ve made some really horrible landings in front of always-appreciative crowds, my crowning achievement being a seven pointer at the Salute To Veterans Air Show in 2011 before 10,000 cheering people.

And this leads naturally into our latest adventure at beautiful Liberty Landing International Airport.

The winter of 2011-2012 proved unusually warm for Dawn Patrol pilots, so much so that we actually flew our little open-cockpit World War I replicas for four days in January and the first week of February started off great, too.

But the wind can certainly kick up at this time of year and it was blustery as we were using runway 3 for landings. The approach end has some challenging obstacles. There’s a house on a hill just 200 feet to the right of the runway and a cluster of tall trees between the house and runway. The rotor off these obstacles can really give you a beating as you flare. As the day progressed, the wind got stiffer and one by one, our group was calling it a day before things got worse.

Eventually, the air got so bad that there were only two idiots left in the air. Sad to say, one of those idiots was me. My Graham Lee-designed Nieuport 11 replica was down with a carburetor problem, so I was getting some rare February air-time in Sharon’s Kolb Twinstar MK-II, powered by a Valley Engineering Big Bad Twin 4-stroke, 50-hp engine.

Years ago, my sainted flight instructor had driven it into my head that when landing in a strong, gusty crosswind, it’s nice to have some extra airspeed in the bank. In my Cessna 120, I’d always come across the fence with an extra 10 to 15 mph. I’d do the same in my Nieuport. In all those years, it had worked flawlessly. Except I forgot one tiny little detail.

Sharon’s Kolb stalls, with one person aboard, at about 35 mph indicated. I normally cross the fence at 45 mph indicated. When you pull the power back on the Kolb or Nieuport, both airplanes stop flying right now, so coming in hot is never a problem on even a short runway.

I crossed over the end of the runway and flew into the rotor from the house and trees. At about 5 feet AGL, I just stopped flying and slammed into the runway. I’ve watched videos of Navy F-18 Hornets landing on a pitching carrier deck at night. Sometimes, they really splatter them in trying to get that magic three wire. My landing that day made those arrivals look like greasers. It sounded like someone had dropped a bowling ball in a kettle drum. Those fabric covered wings can really boom. As I was taxiing in, I noticed that all was not well. I had about a 15-degree list to port.

You know, it’s hard to taxi an airplane with a bent gear leg. It’s even harder to do this while watching a big crowd of airport bums rolling around on the ground holding their sides and laughing. There was no place to hide. I shrunk down in the seat in fear and embarrassment. Standing in front of the crowd with her hands on her hips was the Kolb’s owner. The scowl on her face told me that Sharon was not a happy camper. The grinning crowd gathered behind her was waiting with great expectation for my execution.

Sharon stuck her head into the open side window of the Kolb and screamed, “You big stupid idiot! You broke my plane!” After the crowd scattered out of range, she grinned at me and said quietly, “I’m soooo glad you did it and not me.”

But the fun wasn’t over. Dick Lemons had seen my landing from the air and as soon as he stopped laughing, he decided to land himself. But he failed to learn from my mistake. He blithely stumbled into the same rotor that I had and didn’t even make the runway. He got slammed into the freshly plowed ground beside the runway and buried all three wheels up to the axles. That sudden stop bent one of the fuselage tubes on his MX. The next thing we saw was a cloud of dust and dirt clods like a dog digging for a bone as Dick dug his plane out of the field. You know, normal people pay hard cash for this kind of quality entertainment. 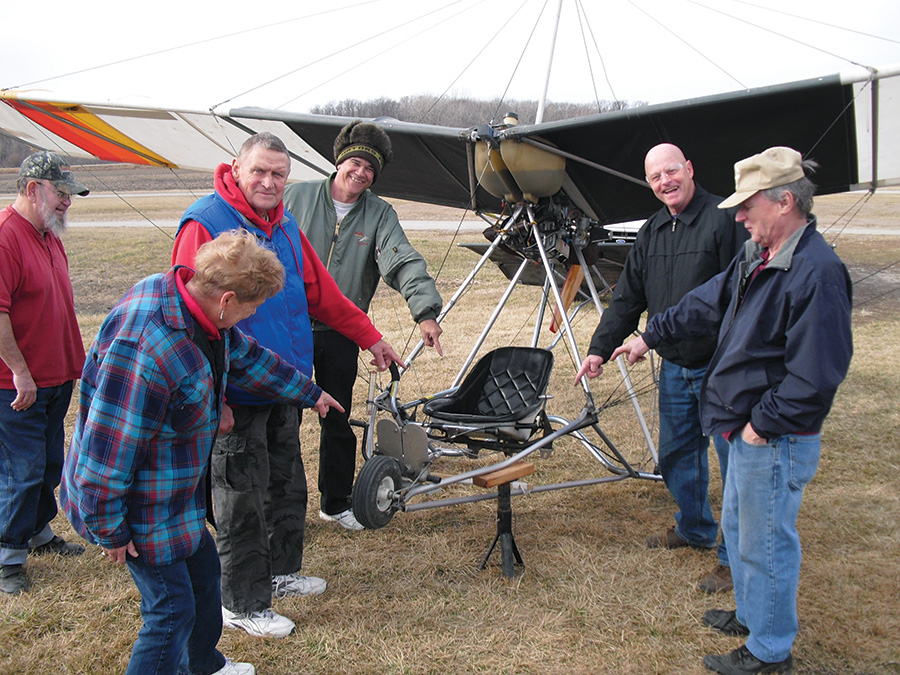 From left to right: Ken Pruitt, Sharon Starks, Dick Starks, Dennis Brooks, Vernon Petre and Tom Glaeser all try to get their points across as to why their idea for the repair of the bent fuselage tube on Dick Lemons’ Quicksilver MX is the better method. The final solution was the ever-reliable Flabtrolic press.

Now it was time for the Liberty Landing International Airport On-Scene Disaster Response And Repair Squad to spring into action. We would deal with the MX’s bent fuselage tube first. When you have eight or nine experienced Experimental aircraft builders all looking at a problem, you’re going to have at least that many ideas on how to fix something and a spirited discussion soon ensued. After careful consideration, we decided to use the Dawn Patrol’s time-honored Flabtrolic press. Yesirree, our favorite tool.

Someone dug up an auto jackstand and it was set up with a piece of scrap 2×4 under the bent section of fuselage tube. Then, with two guys standing on each main gear leg and two more standing on the nosewheel—with Sharon balancing them in place—we started some gentle bouncing on the nose gear. Viola! The tube was slowly nudged back into a perfect straight section, just as it had been earlier that morning. Once again science and technology had triumphed over ignorance and superstition.

Now, on to the Kolb. Clearly, the Flabtrolic wasn’t going to work. Vernon Petre suggested the old method used by farmers for decades to straighten bent pipes. The bow-and-arrow technique uses a length of logging chain and a floor or bottle jack. The chain is placed on either end of the bent pipe and the jack is placed like the arrow in a bow. When you pump the jack up, the chain will gradually tighten and the tube will bend—unless the chain breaks, as it did, scaring the stuffing out of everyone standing nearby. After the chain broke the second time, another discussion broke out amongst the crowd, which was now standing further away. 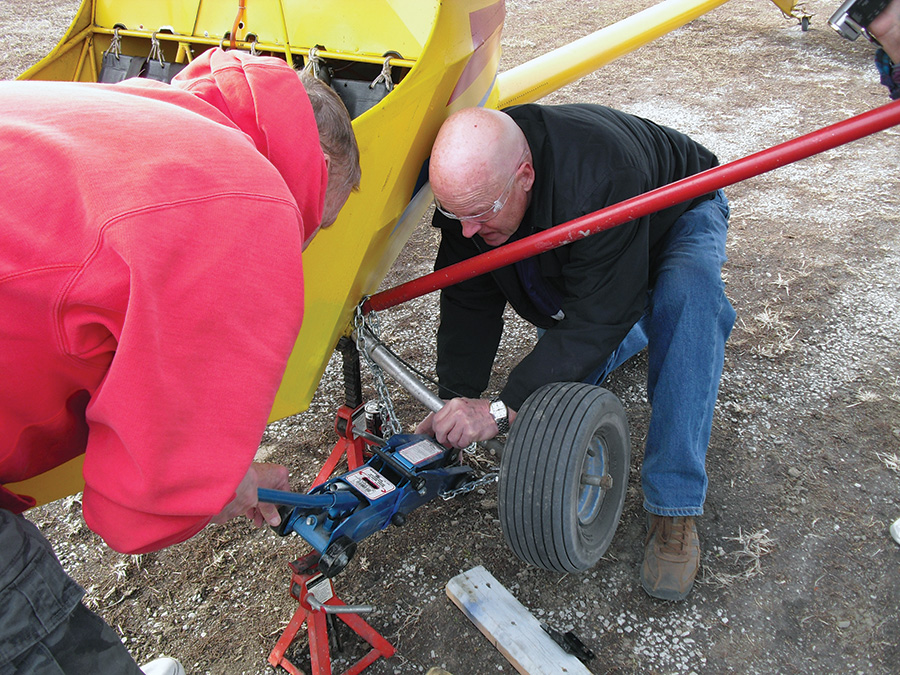 Vernon Petre and Dick Starks ready the first attempt with chain and floor jack to bow-and-arrow the bent Kolb gear back to straightness. It didn’t work. But it would have, if the chain hadn’t broken. 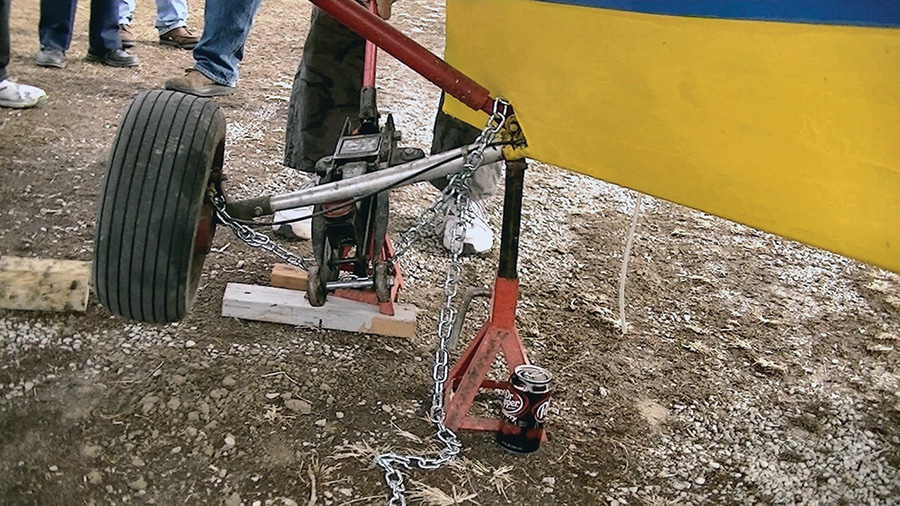 While this was going on, Tom Glaeser, our machinist at large and idea man, was standing to the side, scratching his butt and looking wise. Then he made what we have learned over the years to affectionately call, “The Tommy Noise.”

Tom said, “I’d just put on a bigger diameter tire, and it would all be level again.” This was first met by stunned silence and then a formation eye roll before we got back to real problem solving.

Since the Flabtrolic press was out, the only thing to do was bite the bullet and do it the hard way. The gear leg was removed and taken to a hydraulic shop press in another hangar. Using this 6-ton press, the gear leg was slowly bent back to its original shape. Time to fix both airplanes: only about two hours. 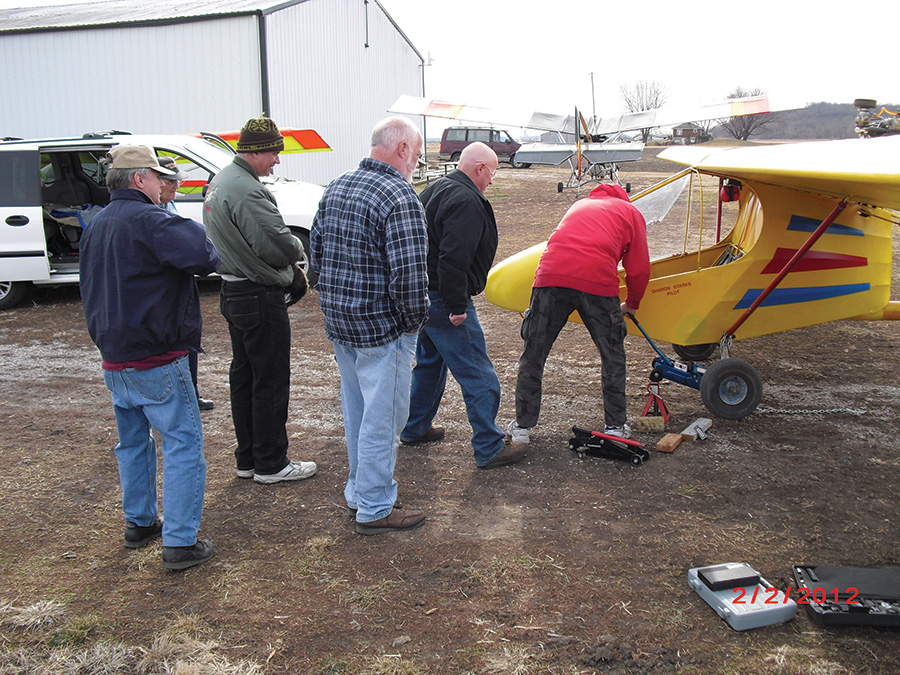 Ready for the second try with the rest of the chain. Notice the crowd is a lot further back this time.

Back in the Saddle

I was really anxious to get back on the horse that had thrown me, but it was not to be. The winds of winter finally descended on Kansas City and we were done with flying for a while. Bone-chilling cold and high winds put everyone back into winter mode for several weeks. But we didn’t care. We’d been able to fly in January and February in Missouri. Life was full and sweet. And that gave me some time to think about what had gone wrong on the Kolb landing.

An ex-airline pilot buddy of mine heard about the landing and e-mailed me with this nugget of wisdom: Bigger airplanes use an approach speed of 1.3 Vso, plus half of the headwind, plus the gust limit for a speed that will safely work in such circumstances. VSO is the power-off stall speed of the aircraft in landing configuration. Just reading that makes my head hurt. I can’t imagine trying to figure out the correct numbers while on short final. An extra 10 to 15 mph sounds better.

I finally broke down and asked him for clarification on what the heck a gust limit is. It’s simple, really. The gust limit is the difference between the steady wind and the gusts. In my case, 20 mph gusts minus 10 mph steady gives a 10 mph gust limit.

Even when it’s not gusty, my friend explained, airline ops call for adding a buffer to the basic 1.3 Vso formula. And that’s normally half the steady-state wind. So if you’re landing into a 10-knot wind, add 5 knots. The simple formula then becomes 1.3 VSO plus steady wind/2.

This won’t hurt you much on requiring more runway to get stopped because your groundspeed is slower after the addition of half the steady state wind than it would be on the same runway on a calm day. None of this factors in the effects of the swirling rotor from the house and trees to the right of the runway, of course. The only formula for that may be to keep it on the ground. 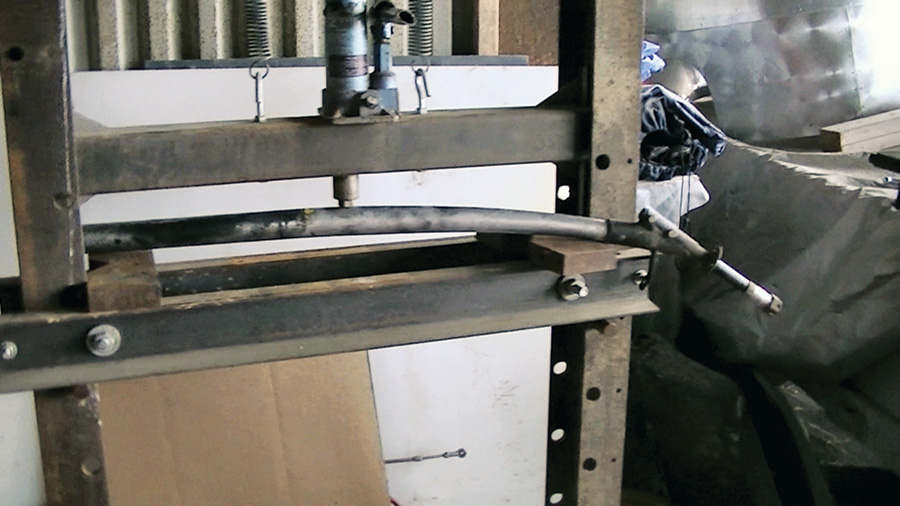 The final solution to the bent gear leg was to remove it from the airplane, put it in a 6-ton floor press and bend it back to its correct alignment. Just for safety’s sake, a new gear leg was ordered.

Dick Starks has written two books about the joy of flying; “You Want To Build And Fly A What?” and “Fokkers At Six O’clock!!” He was the recipient of Flying’s 2001 Bax Seat Award “for perpetuating the Gordon Baxter tradition of communicating the excitement and romance of flight.” Dick and his wife, Sharon, both fly WW-I replica aircraft.