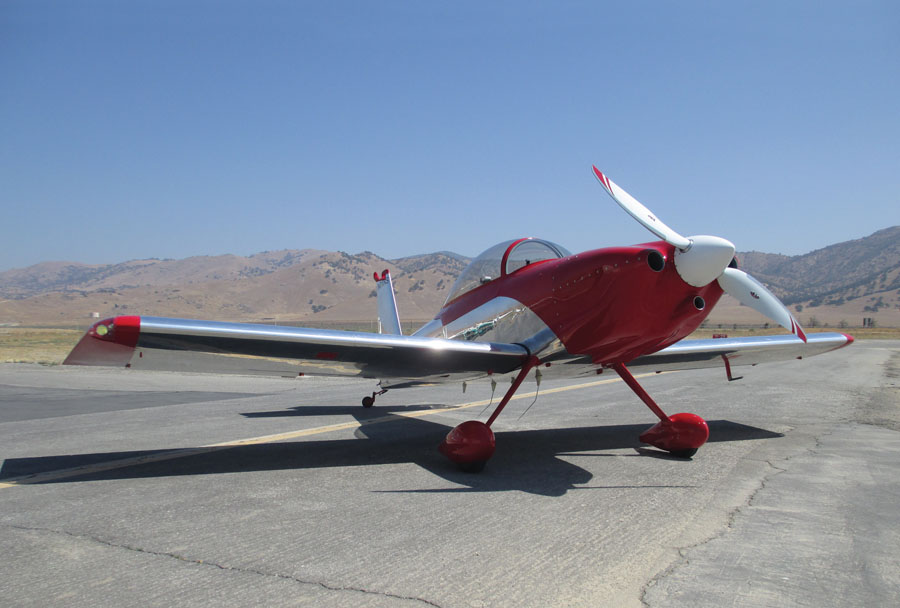 Electronic Ignition (EI) systems are becoming increasingly popular on Experimental aircraft, with frequently touted benefits including: easier starting, smoother operation, reduced plug fowling, less carbon buildup in the cylinders, lower maintenance, the ability to use inexpensive automotive spark plugs, increased performance, and efficiency. These gains are possible due to the higher energy spark (greater intensity and/or longer duration) and variable advance timing used by most EI systems. My Van’s RV-8 has a four-cylinder Lycoming with 10:1 compression ratio and mechanical fuel injection with balanced injector nozzles. It is also equipped with dual P-MAG Ignition (www.emagair.com) and an EI Commander (www.eicommander.com) that allows the user to vary the maximum ignition advance and to shift the timing map. To quantify the effect of varying the ignition timing, I conducted an experiment across a wide range of ignition advance settings, altitudes, and mixtures. My goal was to define the optimum advance map for my engine. This article only looks at the effects of ignition timing on CHT, speed, and efficiency. Analysis of the other potential advantages of EI is left for another day. 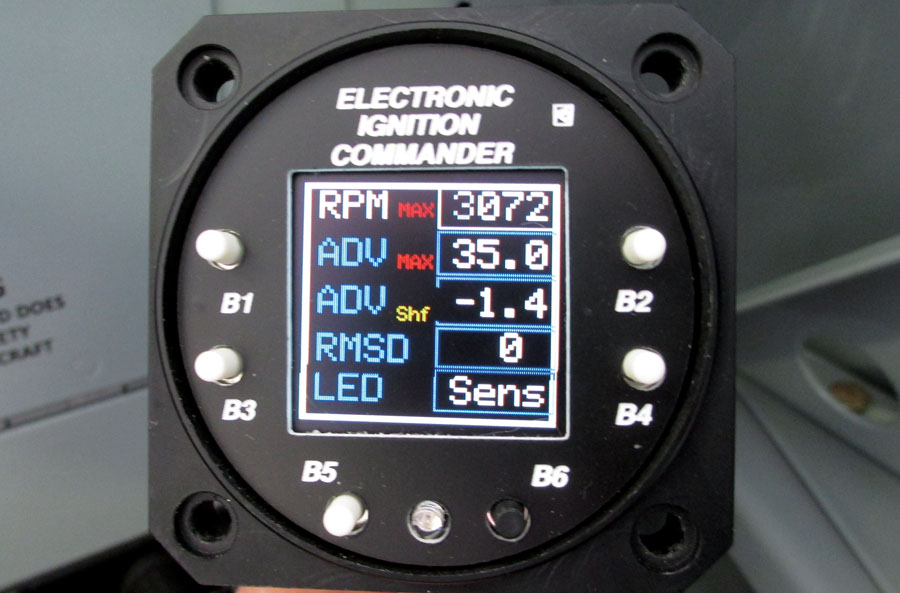 Most EI systems use a combination of manifold absolute pressure (MAP) and engine speed (rpm) as inputs to calculate the ignition advance setting. Optimum ignition timing would occur when the mixture is ignited sufficiently before top dead center (BTDC) so that the peak combustion pressure (PCP) occurs around 17 degrees after top dead center (ATDC). Too much ignition advance and the PCP will occur too close to TDC, resulting in high peak pressures, possible detonation, and high stress on the engine. Not enough advance and PCP will occur too far ATDC when the piston is moving rapidly down the cylinder, resulting in low power. In general, lean of peak (LOP) mixtures and low MAP reduces the flame speed, so these conditions require more ignition advance than ROP mixtures and high MAP to achieve optimum PCP timing. 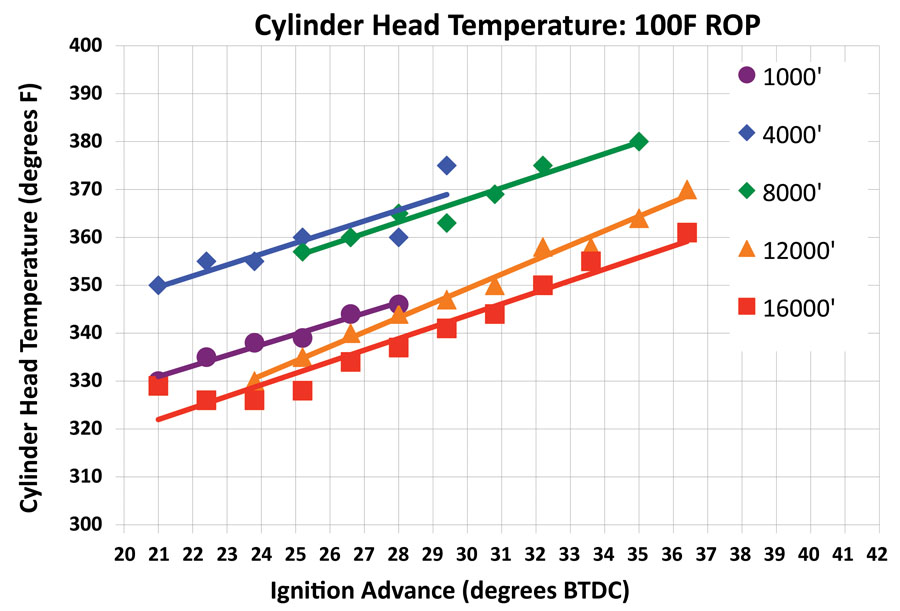 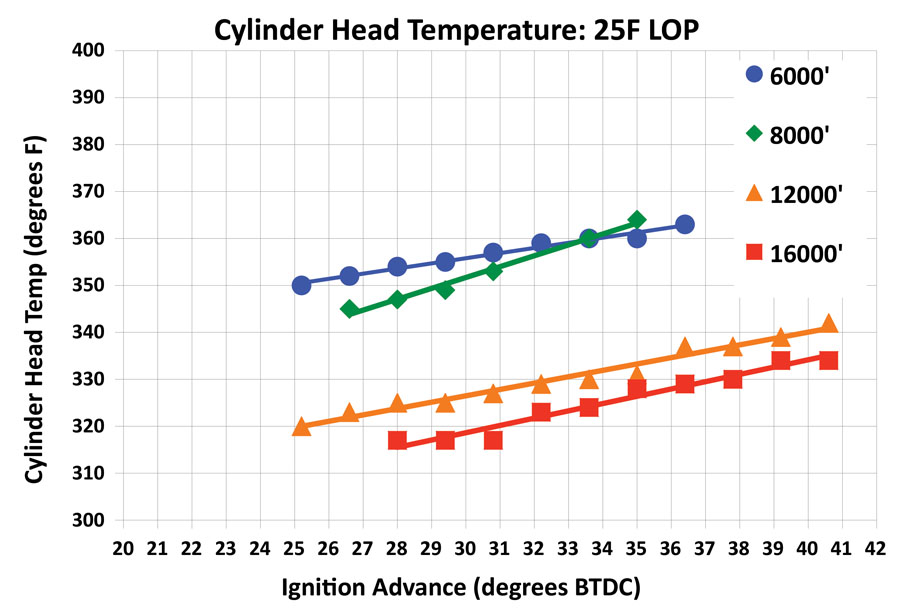 For my experiment, every test point was in level flight with wide open throttle (WOT), propeller set to 2500 rpm, and the mixture constant. I tested at a range of pressure altitudes from 1000 feet to 16,000 feet. I used mixtures of 100 F ROP and 25 F LOP (LOP only at or above 6000 feet). At each test condition, I adjusted the ignition timing and measured the true airspeed (TAS) and cylinder head temperature (CHT). I varied the timing from as little as 21 degrees to as much as 40.6 degrees BTDC (although not at every altitude). This range seemed adventurous enough given that my engine data plate timing is 25 degrees. The higher the power setting, the less I deviated from 25 degrees advance. For most test points, adjusting the maximum advance setting was sufficient to achieve the desired value. At high altitude, to achieve the large advance values, I had to use a combination of maximum advance and advance shift on the EI Commander. The TAS was used as an indication of engine power, and the CHT as an indication of engine stress. Changes in TAS due to timing were relatively small, so smooth air was required for good data. The engine required 5 minutes to thermally stabilize, so patience was required to accurately measure the effect of timing on CHT. I determined the optimum timing under each condition to be the value that gave the highest TAS with the lowest CHT. As the throttle, prop, and mixture were constant for each test run, so was the fuel flow. Thus TAS was not only an indication of power, but efficiency as well. Overall I flew 10 hours and completed 80 separate test points. 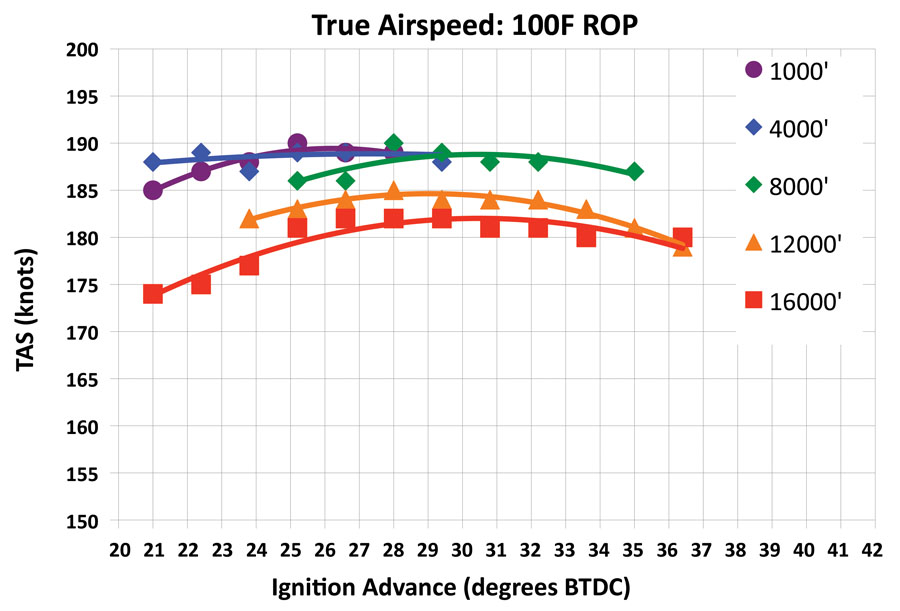 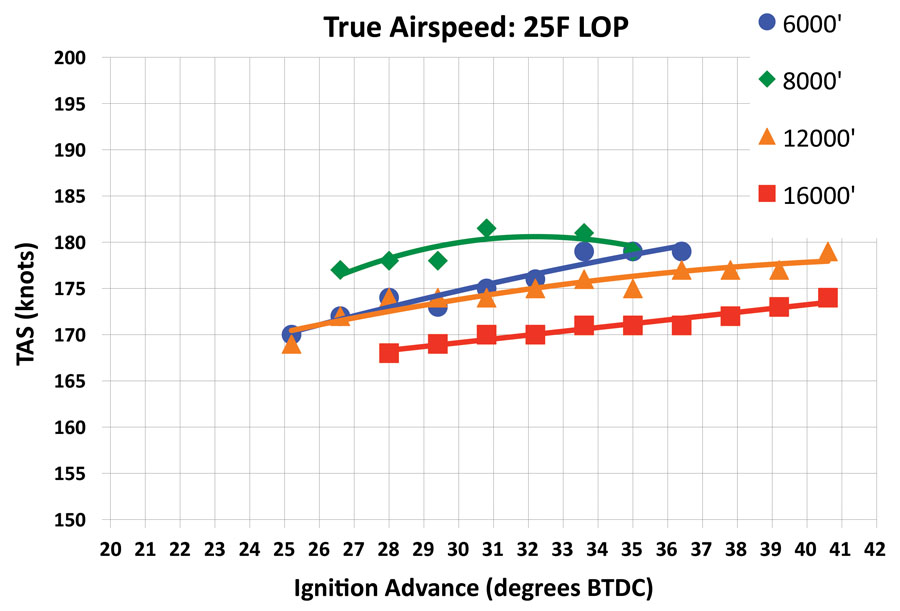 Changing ignition timing also affected the aircraft TAS. Under each condition, the highest speed was achieved at some optimum timing value. Less than the optimum timing resulted in slower speeds. More than the optimum timing also resulted in slower speeds. This characteristic behavior was easier to see at high power. With LOP mixtures and low MAP, the TAS increased with increasing advance. At 12,000 feet and 16,000 feet, I reached my self-imposed test limit of 40.6 degrees advance before a clear peak in TAS versus ignition timing was observed. The potential increase in speed due to optimized timing was made by comparing the speed at 25 degrees ignition advance. When ROP, the speed increases were quite small. The greatest increase ROP was at 8000 feet, where speed increased from 186 to 190 TAS when going from 25 degrees to 28 degrees ignition advance (a 2% gain in speed). As speed is proportional to power cubed, this would equate to a 6.6% increase in power. LOP the increases were larger. The greatest increase LOP was at 12,000 feet where the speed increased from 169 to 179 TAS as timing was increased from 25 degrees to 40.6 degrees ignition advance (a 5.9% gain in speed). This equates to an 18.8% increase in power. The curves for speed versus timing had relatively flat peaks. This meant that the speed penalty for using less than the optimum ignition advance was small. Given that the CHT always increased with increased timing, it was much better to err on the side of less, rather than more, advance. 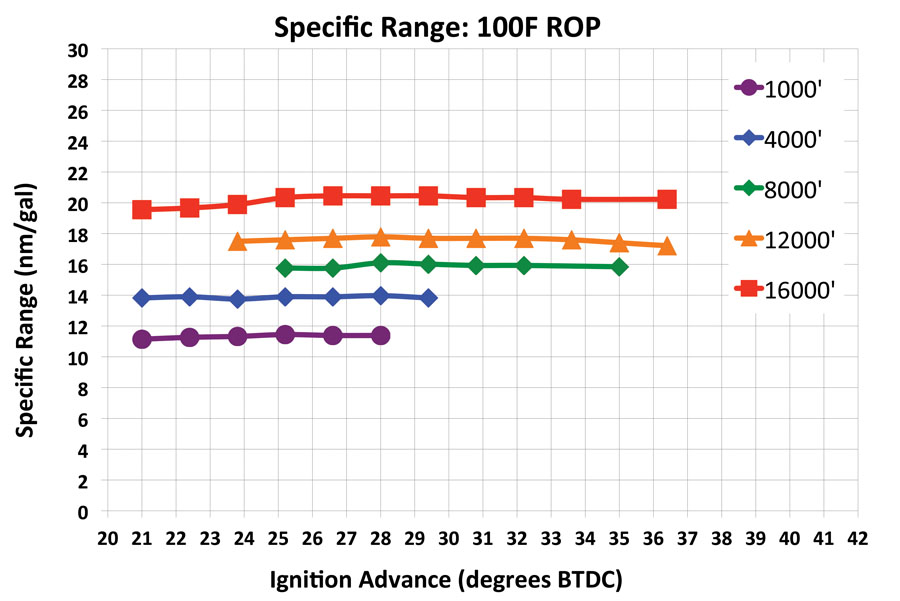 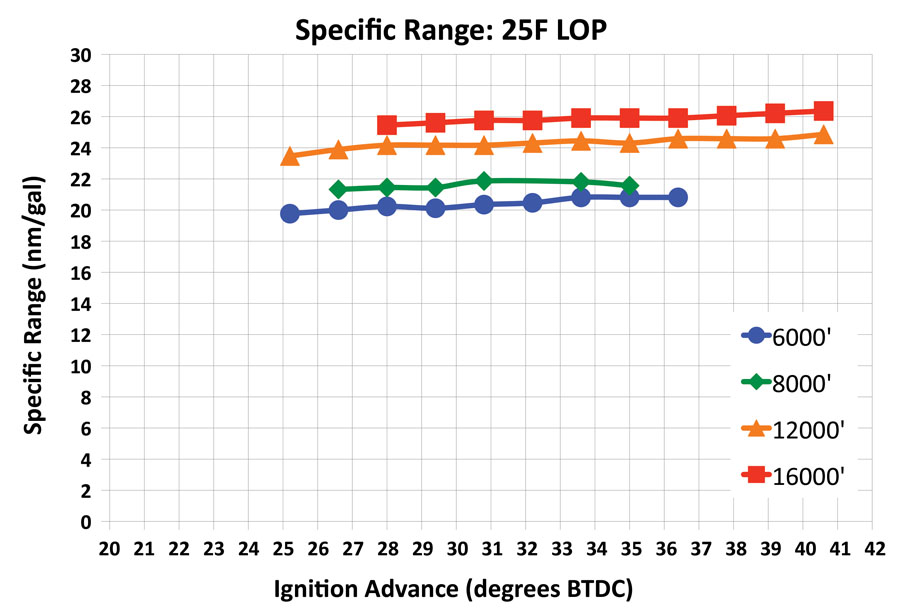 An advertised advantage of electronic ignition is that the high-energy spark, in conjunction with variable and more highly optimized timing, results in “substantial” increases in efficiency. A quick internet search yields claims on the order of 10-15%. We normally think of efficiency as specific range, measured in units of nm/gal, which is the same as TAS/fuel flow (nm per hour/gal per hour). In my experiment, the fuel flow was constant for each test run. The ignition advance that resulted in the highest speed also resulted in the highest specific range. When the specific range was compared with the specific range achieved at 25 degrees ignition timing (baseline for my engine), it was possible to isolate the improvement in efficiency due to optimized timing alone. When ROP, the average improvement in efficiency due to optimized timing was 1%. When LOP, the improvement in efficiency was slightly higher, averaging 4.3%. The greatest improvement I saw was only 5.9%, which shows that ignition timing is not a significant factor in increased economy. Efficiency was improved more by simply climbing 4000 feet than optimizing the timing at any given altitude. Repeating this test keeping TAS constant (by adjusting throttle) and measuring fuel flow versus timing advance had the same outcome. 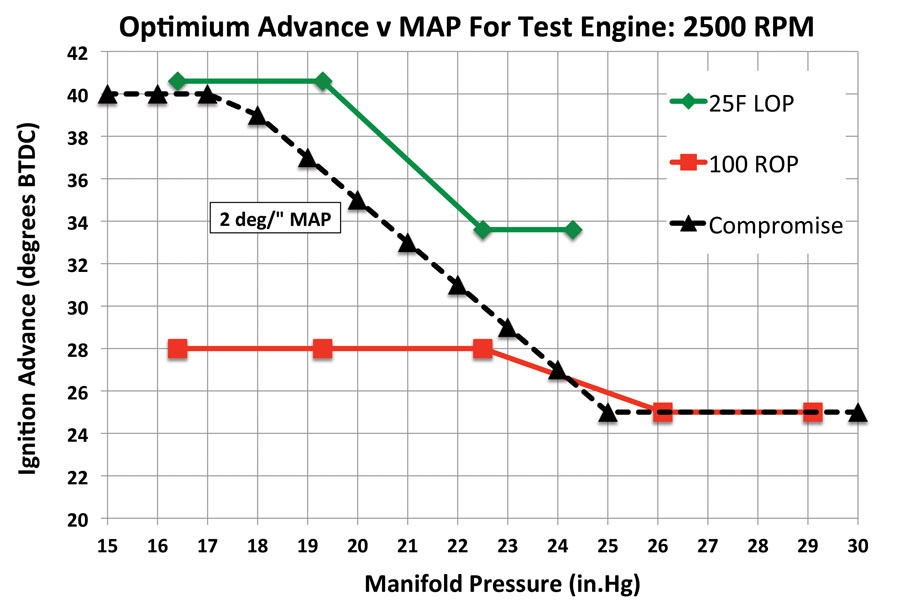 When considering an optimum ignition advance curve, it is necessary to consider the mixture as well as rpm and MAP. The Lycoming IO-360 Operator’s Manual recommends leaning only when less than 75% power. For an engine rated at 2700 rpm and being operated at 2500 rpm, WOT and ROP, this will occur at around 24 inches MAP or 6000 feet. Let’s assume we operate ROP above 24 inches MAP and LOP below 24 inches MAP. Taking into account the optimum ignition advance results obtained and the operational requirement to transition from ROP to LOP, a best compromise curve for my engine would have a constant 25 degrees ignition advance above 25 inches MAP, at which point timing would increase at a rate of 2% per inch of MAP reduction, up to a maximum of 40 degrees advance at 17 inches MAP. I say a compromise, as my ignition system does not automatically compensate for mixture and has a single map that must work acceptably for both ROP and LOP conditions. 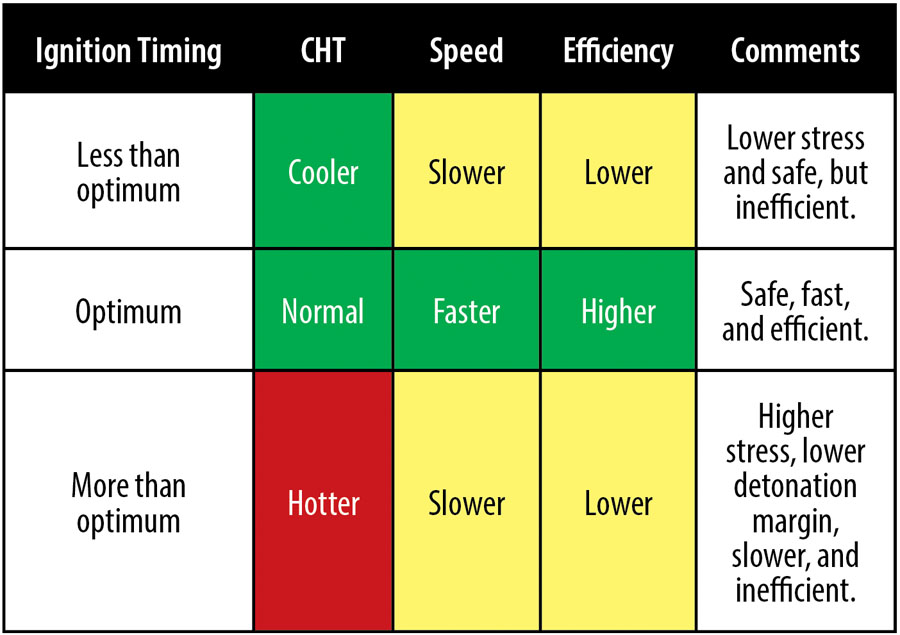 There are a few safety considerations to think about if you embark upon an ignition timing experiment, especially if it involves changing the timing while the engine is running or in flight. If you command an ignition advance setting that is not compatible with the engine’s current operating regime, it may do one or more unpleasant things. It could run rough, stop, or be driven into detonation, which could quickly lead to pre-ignition and subsequent failure. To reduce the risk, you may consider implementing some or all of the following strategies that I used.

Before commencing an ignition timing experiment, you should also consider how you fly your plane and the risk vs. reward. The likely reward is low single-digit percentage increases in speed and efficiency, but the risk is high CHT and potential catastrophic engine damage. There are much more fertile places to look for improvements before you consider ignition timing. In my aircraft, flying at 18,000 feet improves efficiency by approximately 25% compared to 1000 feet. Similarly, running LOP vs. ROP under any condition also improves efficiency by about 25%. Even though I have a constant-speed propeller, I see as much as 7% increase in TAS at constant MAP and fuel flow by choosing the optimum rpm. If you fly ROP there is very little to be gained by changing timing. LOP the gains due to ignition advance are larger, but still small in the grand scheme of things.

The gains from varying just the ignition timing are real, but small. Most of the efficiency advantage of EI systems likely comes from a higher energy and longer duration spark that allows LOP mixtures to be ignited reliably at high altitude. Once you can ignite a LOP mixture, subsequently varying the timing only has a small impact. If you change from magnetos to EI, you will see the benefits of higher intensity spark and timing, whereas in this experiment, I already had EI and just varied the timing. More ignition advance increases CHT. It is not possible to have optimum ignition timing based on rpm and MAP alone; the mixture must be considered. LOP mixtures require a greater variation in timing due to changes in MAP than ROP mixtures. The difference between optimum ROP and LOP ignition timing is not constant. When it comes to ignition advance, too much is not just about right. It is much better to err on the side of less ignition advance. The methods presented and the data shown here are just one way to conduct an engine timing experiment. The values shown are meant to provide a general indication of the effects of varying timing, not to provide an ideal timing map for every engine. The advance values shown here could be safe in your engine, but they could just as easily result in a catastrophic failure.

Nigel Speedy started flying helicopters with the Australian Army and is a graduate of the U.S. Naval Test Pilot School. He currently instructs at the National Test Pilot School in Mojave, California. Nigel enjoys flying his Van’s RV-8 and the freedom of E/A-B to experiment.