Piston engines generate power by applying torque to rotate the crankshaft. The crankshaft cannot be mechanically coupled directly to push against the air to drive the airplane forward. That function is performed by the propeller, which takes the power developed by the engine and converts it to thrust.

Proper matching of the propeller to the engine, and the flight condition at which the airplane will operate are essential to getting good performance from the airplane.

The thrust horsepower delivered by the propeller to the airframe to drive the airplane forward is a function of two things: the shaft horsepower from the engine that is driving the propeller, and the efficiency of the propeller itself. Both of these vary with airspeed and propeller rpm. 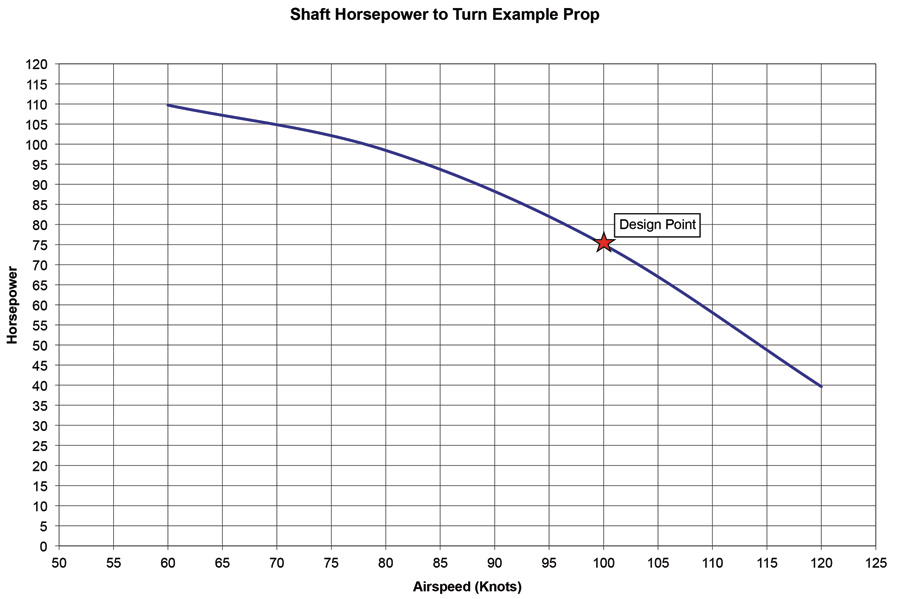 This behavior has several important implications. The amount of power required to drive the propeller at a given rpm is also the horsepower the propeller will apply to the air to make thrust at that rpm and airspeed. A propeller flying faster than its design point can’t absorb the full design power without turning faster than the design rpm.

The second effect is that the engine may not be able to drive the propeller at the rated rpm at airspeeds below the design point. If this is the case, then the propeller will govern the engine to a lower rpm and lower horsepower.

To see how this works, refer to Figure 2, which shows the power absorbed by our example prop as a function of rpm at several airspeeds. The figure also shows the power the engine driving the prop can deliver at full throttle as a function of rpm. If we look at each constant-airspeed propeller power curve in turn, we will find an rpm where the power absorbed by the propeller matches the full-throttle power the engine can deliver. This is the rpm the prop will spin at that airspeed. That equilibrium rpm, in turn, determines how much power the full-throttle engine is developing while turning that propeller at that airspeed. 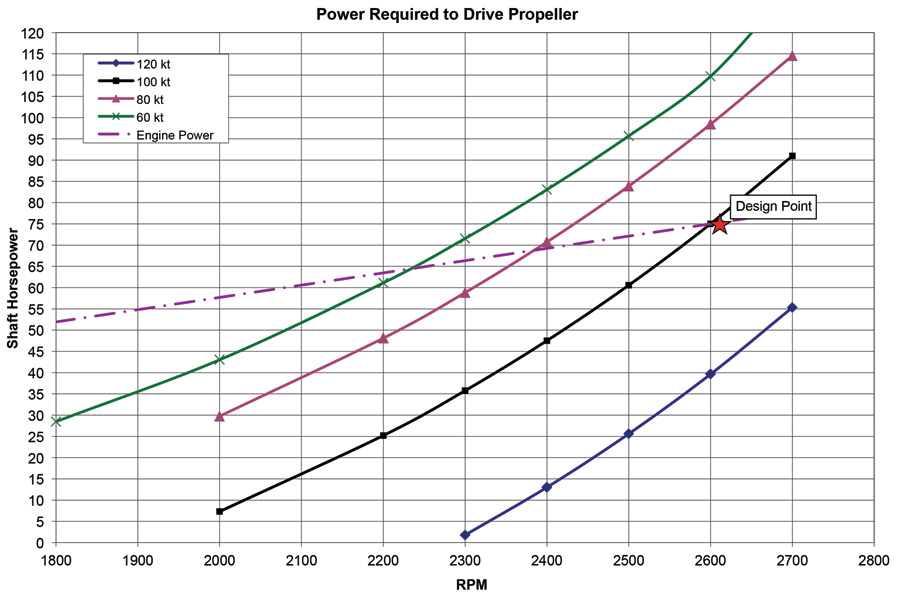 At 120 knots the picture changes. The propeller cannot absorb the power the engine can produce at full throttle, even if we allow the rpm to increase to 2700. Assuming the airplane gets to that speed, the pilot will have to retard the throttle to avoid overspeeding the engine, so that the power delivered to the propeller will drop to 50 horsepower if the limit is 2700 rpm.

What we see here is the essential compromise inherent in choosing a fixed-pitch propeller. We want the prop to efficiently absorb the cruise power of the engine at our desired cruise airspeed and altitude, but we also need it to be able to deliver enough thrust for takeoff and climb. A cruise-optimized propeller is likely to govern the engine too much at low speed, particularly if the airplane is clean, and relatively fast. The more airspeed difference there is between cruise and climb, the farther the prop will be from its cruise operating condition in climb. This is why we tend to use propellers that are a compromise. They have a bit less pitch than would be optimal for cruise in order to improve takeoff and climb.

Figure 3 shows the efficiency of our example propeller as a function of airspeed and rpm. The important thing to notice here is that the propeller efficiency drops significantly when the propeller is operating far away from its 2600-rpm, 100-knot design point. 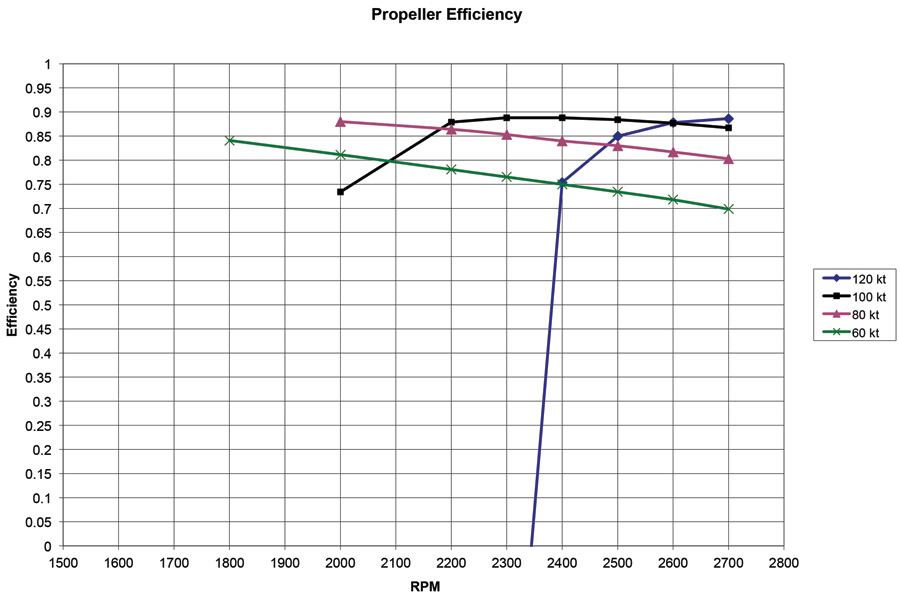 Plots like Figure 3 are a bit difficult to use, so propeller designers have evolved a way of combining all of the curves at varying airspeeds and prop speeds into a single curve. We do this by defining a quantity called the “advance ratio” of the propeller. The advance ratio (signified in equations by “J”) is the airspeed in feet per second divided by the diameter of the propeller in feet and the rotational speed of the prop in revolutions per second.

Figure 4 also shows why we don’t want to move the design point to too low an airspeed while trying to improve climb. Notice that above a certain advance ratio, the propeller efficiency falls very rapidly. We must ensure that our airplane isn’t trying to cruise here. 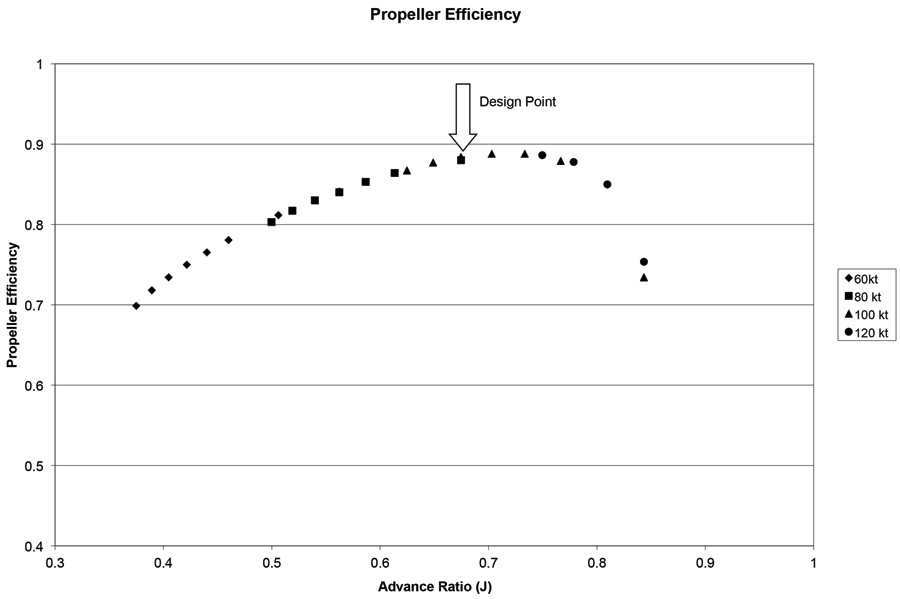 In total, the thrust horsepower available from the engine/propeller combination at any given airspeed is the product of the power absorbed by the propeller from the full-throttle engine and the efficiency of the propeller at that flight condition. 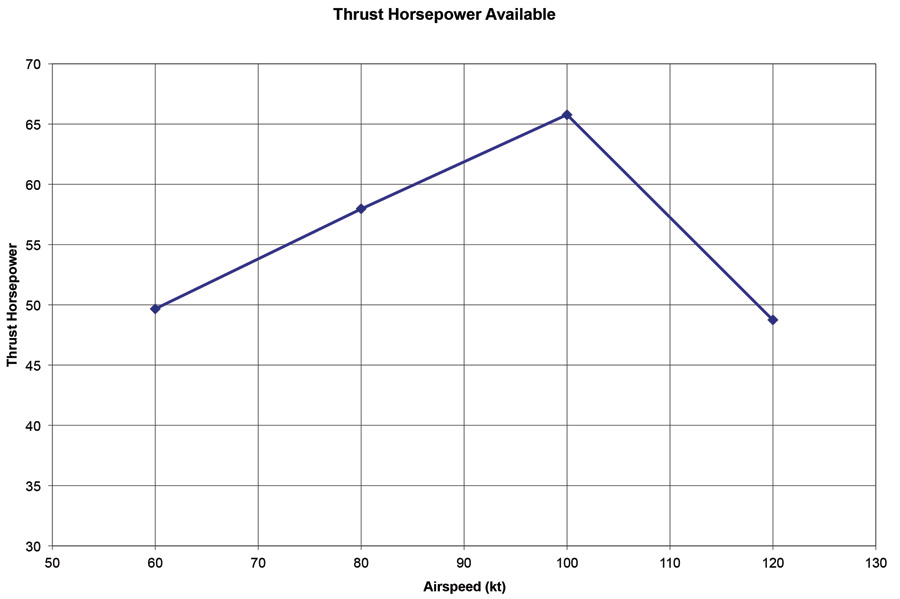 Matching a fixed-pitch propeller to an airplane is inherently a compromise driven by the relative importance of takeoff roll, climb performance, and cruise performance. If the airplane has sufficient power and is operated off of relatively long runways, we can use a higher-pitched propeller biased towards cruise. Takeoff roll will be higher and rate of climb lower than it would be if the prop had less pitch, but the airplane will fly faster in cruise.

If the airplane has relatively low power-per-unit weight, or if short takeoff and initial climb are most important, then the preferred prop will have a lower pitch that allows the pilot to use more of the engine’s power to accelerate and climb. The price for this will be a lower top speed.

A major advantage of a fixed-pitch prop is that it is lighter, simpler and cheaper than one with variable pitch. For many light aircraft, the compromise in performance is small enough that the lower cost and greater simplicity outweigh the performance hit.

As the airplane gets faster and the speed difference between climb and cruise gets bigger, it gets harder to find a single propeller pitch which produces acceptable climb without seriously limiting cruise speed. At some point this compromise becomes too large, and we must look to variable-pitch and constant-speed propellers to provide good performance over the entire airspeed envelope.