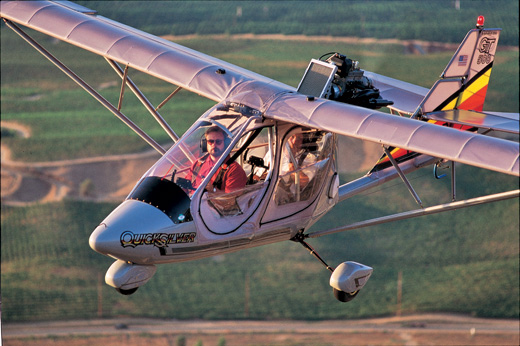 That’s a look of concentration, son. The author back in the day, flying the Quicksilver GT 500 on a Cessna 172RG camera ship. Not well-matched, you might say.

There are days I wish my logbook entries were more descriptive. I have a few notations of significant weather, one “almost got whacked by a TRW [thunderstorm],” and a few more prosaic comments in those faded black books. I can still clearly read the entries put in by my instructor Craig Brown as I bumbled through instrument training. How he could write legibly in what must be about four-point type still amazes me. I don’t recall him donning a jeweler’s loupe.

What I don’t see and wish I had noted clearly was the first time I took instruction in formation flying. I know it was sometime in 1989 when I worked for AOPA Pilot. Back then, it was assumed that each of the editors would be formation qualified so that it would be easier to collect air-to-air photography in the field. Before work, we would meet with John Sheehan, who was our executive vice president at the time; it took four of us, one to fly the lead ship, plus Sheehan and two students, who would trade seats (on the ground) halfway through the lesson.

Sheehan is the quintessential naval aviator. (I was told that you’re never really a former naval aviator, regardless of your status with the service.) Calm, cool, a very good teacher willing to let you make mistakes and learn from them. I vividly remember the first time we joined up. It felt like I could count the rivets on the Piper’s belly, we were so close. I’d never been that close to another aircraft in flight—I confessed then and admit now that I broke more than a little sweat.

Sheehan taught us the basics of aircraft position, the essentials of the smooth join-up and forcefully reminded us when we had maneuvered into a spot with few good “outs” in case something happened. I’m not sure if his syllabus was exactly like the Navy’s, but it worked. Tom Haines, current editor-in-chief at AOPA Pilot (one of many titles he holds, probably) and I eventually graduated from Sheehan’s informal course and went on to fly countless missions for the camera. 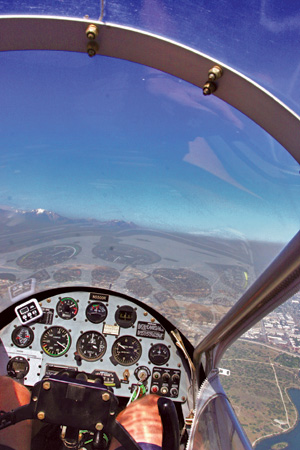 Capturing fantastic air-to-air photos often requires far more people and machines that you’d think. In my days at AOPA, we would usually have the photographer, a camera platform, the platform pilot, the subject airplane, the author to fly the subject airplane and the owner or minder of the subject aircraft itself. Then you have to get all of these pieces into one place where there’s good weather (clear, clean sunshine and mild winds) just in time to catch the last hour or so of sunlight. Or, worse, the first hour of sunlight.

What I found interesting about the application of my newfound knowledge was how much of it went straight out the window. That’s because the angles and distances that work best for pure formation flying don’t cut it when there’s photography involved. For a variety of reasons relating to composition of the shot, the size and shape of the airplane, and the terrain in the background, I soon found myself looking at Art Davis’s or Mike Fizer’s lens from bizarre angles. Tom Horne, another of my AOPA cronies, told me right after I’d been cleared to fly photo missions that, “If the sun isn’t directly in your eyes or your neck doesn’t hurt, you’re probably not getting the shot.” It may seem backward, but for the needs of the magazine, the photographer was in charge right up until the pilot of the subject airplane cried uncle.

He might do so for any number of reasons. I remember shooting an early Diamond Katana and being asked to move laterally farther and farther away from the lead ship, out from the 5 o’clock position toward the 3 o’clock. Next came the request to go up and back. I followed these commands until I realized that I was holding several pounds of right aileron to maintain station. I’d been watching the photographer, breaking my focus every so often to check the relationship of my airplane to his. (It’s best to avoid staring at a fixed spot on the lead airplane; moving your gaze around helps maintain perspective and gives you clues to relative motion.) I hadn’t realized that he had moved me close enough to the lead airplane that I was in the wing’s downwash, which was trying to turn the little Katana right into him. A few inches down and a foot or so outboard fixed the problem. The best days are when you’re doing 360° circles in dead-smooth air and you feel a bump every couple of minutes, the result of flying through your own wake.

You would think that the competence of the pilot flying the wing position was most important, but the truth is that a smooth lead pilot makes all the difference. In my travels, I’ve flown with many, often just a local flight instructor piloting the rented camera ship. Some have been great, some, ah…not so much. My favorite is my current CFI, Betsy Parrott, who is the rare breed of intentionally full-time flight instructor. Parrott is a great stick and just incredibly smooth. Her transitions into and out of maneuvers has long made me look better than I am. The point is that when you fly formation, be sure to let the lead pilot know how important he or she is to the whole endeavor.

Visibility was sometimes a problem. I recall flying right seat in a Stinson 108-3 while we used a Cessna 172, where the photographer normally shoots from the copilot’s side. Looking cross-cockpit usually isn’t a problem, but the low ceiling and tubular structure in the windshield made me feel like I was looking through a mail slot. I caught some flack for the lack of different angles in the finished set, but there’s only so much you can do.

Incompatibility between the subject and platform aircraft form some of my strongest memories. In general, you want two airplanes of similar power, speed and wing loading. Big discrepancies here can make a lot of work for the pilots. (There are other issues: On one of the first shoots Kevin Wing did in aviation, he was in the lead airplane, a Cessna T-210, and I was flying the subject, an extremely cool 1955 Cessna 310 twin. We were shooting off the coast of Northern California when I realized we’d been heading west for quite some time. “Are you sure you want to keep going?” I asked Wing over the radio. “Why?” he said. “Well, we’re only about 1000 feet above the water and some distance from shore. You may notice I have one more engine than you do.” A moment of silence, then, over the radio, “Yeah, ah, we can do some backlighted shots now.” Good man. 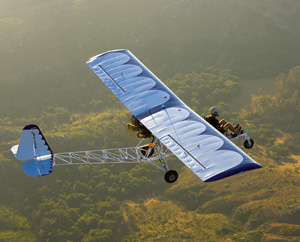 Sometimes the reverse is true: Here, the camera ship flies on the subject. Keeping the GlaStar Sportsman down to Breezy speeds was a challenge.

I had many missions that seemed hard but were easy—especially flying the various Mooneys for AOPA. The Mooney is a slick airplane, and the turbo versions can have really non-linear throttle response. Getting and keeping a Mooney 231 or a TLS in the slot is a lot of work. But then you slowly discover the tricks, like skidding the Mooney slightly to scrub off speed at the end of the join-up, or finding the right combination of rpm and manifold pressure to keep the turbo from spooling up.

And then there are the missions that really make you labor. The one that stands out was the Quicksilver GT 500, which I flew in the early 1990s. It was one of those missions that had been delayed by weather and other factors, so time was of the essence. We chose a hot, slightly windy day near Temecula, California, and could only get a Cessna 172RG as our camera platform. Every bump the Quicksilver hit was one the Cessna blithely ignored. The GT was running hard to stay with the Cessna—we tried to avoid putting flaps out on the Cutlass—and I can still feel the knots in my neck and the sweat running down my back from that assignment.

A week after the shoot, AOPA’s art director called me and asked if I hated the airplane. Why? “Well, you look really mad in all of the shots.” I had to laugh. Later, I asked our photographers to remind me to unclench if it looked like I was working too hard. Most of them actually remembered.