There are lots of reasons I miss N30KP. As some of you may know, I parted with my beloved Sportsman 2+2 homebuilt in 2011, the culmination of a series of difficult decisions that were, themselves, prompted by our persistently sluggish economy. Thankfully, the airplane was sold to a foreign buyer who will enjoy its incredible utility in another country. He decided to put it on conventional gear for use in the African bush.

Delivering the Sportsman to its birthplace at the Glasair Aviation facility in Arlington, Washington, where it would be fitted with conventional gear was one of my most difficult flights—and not because the Pacific Northwest decided to give me one last ice encounter just for fun.

Needless to say, I miss the airplane terribly, but probably not for all the reasons you’d guess. Some of those reasons should be obvious. I had more than a little blood and sweat in that airplane, and it was an excellent traveling companion. It was truly useful in my line of work: arrive at an airplane company off the beaten path with the camera ship in hand (saves scrabbling around for something that might or might not be suitable), provide a platform for testing new technologies and, no doubt, simply flying the flag. For the right mission, a light airplane makes tremendous sense; I saved days of travel using the Sportsman compared with riding the airlines.

Since the sale, I’ve had to rent or borrow airplanes, which carries its own set of challenges. The less said about that the better.

By far the most surprising thing about my post-Sportsman life has been that glaring hole in my off-hours activities, and I don’t mean the flying. You see, the Sportsman not only bore me through the sky but also tolerated an almost outlandish amount of tinkering and tweaking. Right from the start, the airplane fulfilled my need to build something. Although N30KP started as a Two Weeks to Taxi prototype, there was a massive amount of work to be done. What’s more, because it was the first Sportsman to carry the Lycoming IO-390, we were prototyping the installation at the same time we were prototyping the program. Double your pleasure.

Sure, pleasure. I recognize there is a broad spectrum of builder types, from those who want to make every part on their own from scratch, to those who much prefer the Tab A/Slot B assembly method where little pure fabrication is done. I’m somewhere in the middle, better at visualizing the way parts go together and determining the best ways to do it than at raw fabrication.

That said, I was probably unduly proud of the third seat I fabricated for the Sportsman, which normally carried a bench seat at the back of the cabin just large enough for kids. That didn’t work for my family of three (which includes a teenage daughter who’s now bigger and stronger than her mom), nor was it useful when the Sportsman became the magazine’s camera station for air-to-air photography. Without commercial alternatives, I built a composite structure from scratch, using foam cores, raw E-glass and vinylester resin. I did more work in composites on that seat alone than there is in the whole of the quickbuild Sportsman kit, though it did pale compared to the years of laying up, sanding and scratching on my mid-1990s Pulsar.

This rear-facing seat structure was bonded into the belly of the airplane behind the metal safety cage and worked splendidly for many hours. I was confident that the bonding to the fuselage shell was more than sufficient for the loads, but with composites you never know—until I removed the seat for the sale. (I didn’t want the liability.) Or I should say tried to remove the seat. It took most of a day to grind it out of the fuselage shell. I felt all warm and fuzzy (as well as sweaty and covered in fiberglass dust) that the seat was so secure; my research and practice with composites was validated. Ted Setzer, Glasair Aviation’s veteran fabricator and fanatic about weight, would probably not share my enthusiasm. “Marc, if it’s that strong, you built it too heavy!”

The seat was one of many sub-projects, as longtime readers of this magazine know. I’ve truly lost count of the different instrument-panel configurations that were in the airplane. With Stein Bruch’s help, I learned a lot about wiring and troubleshooting. There were times when I thought I should just sit on my hands and enjoy using the Sportsman, but that would pass, and soon a new sub-project would appear on the horizon. My own version of the Winchester House. 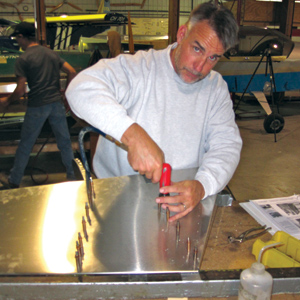 In the time since the sale, I’ve closed up the hangar and moved a ridiculous number of tools to the shop behind my house. For awhile, I was happy to have weekends off. But then the itch: First my motorcycles received some much-needed maintenance, then the cars, then the house. I wander out on a Saturday morning looking for something to do. When I had the Sportsman, that was never the case. It was more like: Which of the many projects should I tackle first?

My point is this: Relish the building process. Enjoy it now. I appreciate that you want to get it done, move that project out of the garage or shop or hangar and assuage your family’s perhaps unstated concerns that you’ve bitten off more than you can chew. But that’s not your motivation, or it shouldn’t be.

As you pound rivets or mix epoxy or string wire, you are learning. You are facing new challenges, staring them down and engaging your mind to find solutions. Building an airplane is far more than the make-work it seems sometimes to be, even when faced with repetitive tasks. Yes, there are unpleasant aspects—I once thought I was going to be trapped under the instrument panel of my Pulsar until I remembered that, well, somehow I got in there so there must be a way back out—and, yes, you will make mistakes. But it’s all part of the experience. One day, you’ll be done, and you may even have to make the difficult decision to part with your handiwork. From that perspective, there’s nothing sweeter than a rivet perfectly driven.