While Editor Dye has already made the first of 2016’s pilgrimages to the National Air Races, today was our first for the year. As such the day was mainly consumed with reconnecting with participants, and we still have many more people to see.

Although socially challenged, we were able to confirm Race 33, the ex-Greenamyer Lancair Legacy now being piloted by Elliott Seguin is this year’s first casualty. Technical major-domo Andy Chiavetta and Elliott were still consulting the data tea leaves this morning, but the broken connecting rod and decapitated piston visible through the pair of holes in the Continental 550’s case put to rest any thought of running the plane any more this year.

The pirep from Elliott was he sensed an engine issue during qualifying and was dialing back the power in a rapid, yet controlled manner when the engine let go. Central to the failure is it takes a trained octopus to fiddle with the manual throttle, mixture, propeller, ADI, ignition and other controls while flying a sick bird with a bank vault glide path to a safe landing. Unfortunately, it’s often not humanly possible to reduce the load on these highly-stressed engines before they succumb to any excess drama.

Chiavetta’s other charge, Lynn Farnsworth’s Legacy was doing well and took little more than some leading edge tape after encountering some heavy rain on the way to the races.

Andrew Findlay reported everything looking good, and indeed he qualified notably faster than last year (much of the leading Sport Gold racers have stepped up this year). Massaging the fuel system and a larger pump have apparently given the Stihl-sponsored Lancair the fuel it needed last year and the team was working on optimizing the engine tune for hopefully improved performance later this week.

Jeff LaVelle returned to Reno this year in style, topping the qualifying chart by a few ticks over 400 mph in his Glasair III. The plane is unchanged from its last Reno appearance.

Kevin Eldredge was looking pleased with the performance of his naturally-aspirated IO-720 powered Nemesis NXT. His 8-cylinder engine sports Ace AX50 jugs and while not a contender to the ultra-fast turbo and supercharged Gold racers, Eldridge’s goal is to be the fastest naturally-aspirated Sport Gold racer while demonstrating the Ace hardware. So far he’s succeeding on all accounts.

Later today John Parker and crew were able to successfully run the repaired Falconer V-12 in John’s Thunder Mustang. While nitrous-assisted during qualifying the supercharged Falconer had cracked a single piston, but everything looked good during today’s test ground run.

We’re out of space for now, but stay tuned for more tomorrow. With luck we can get to the F1 and Biplane hangars as well as the rest of the huge Sport field. 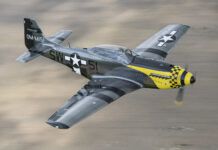