For a short time, Simplex Aeroplanes is offering plans at a discounted rate of $100. Customers can also receive a copy of the half-VW conversion plans, a $25 value, free with their purchase of the Cloudster construction plans. Simplex Aeroplanes is also offering kits, including tailgroup starter kits for $170 to help encourage new builders to begin their projects.

The Cloudster was designed in 1994 by Scott Land of Pop’s Props. The original Cloudster had a 34-foot long wing and stalled at 22 mph. It started out with a 28-hp half-VW with 88mm cylinders and met Land’s primary goal of a low-horsepower airplane with good fuel economy. Continued modifications addressed adverse yaw, and resulted in better climb and cruise.

According to the company, the Cloudster’s fuselage is simple box-spar type construction. Both sides and bottom are covered with 1⁄8-inch plywood, providing a rigid torque box. The tail group is constructed using conventional methods, and the elevator uses a single push/pull tube running through phenolic bearings. Wire or tube bracing may be used to reinforce the tail assembly.

The wings consist of a modified Clark Y airfoil and are given a 2.5 angle of attack and a 1.5 dihedral setting. Ailerons are operated by a pair of push/pull tubes and torque tubes running through phenolic bearings. Landing gear consists of a one-piece prefab aluminum slab made from 1⁄2 inch by 4 inch 2024-T351 alloy. The spindles are pre-welded and drilled for easy installation; 4.00×6 Azusa wheels and wheelbarrow tires finish the assembly, and brakes can be adapted with little effort. Complete or partial gear assemblies are available.

The fuel tank is a 2.5-gallon unit located behind the firewall with enough room in the center section for 5 gallons of fuel and gravity feed.

The Cloudster requires no welding (when the landing gear kit is purchased), and all steel components are kept to a minimum. A fiberglass cowling is available as an option as is a three-point safety harness assembly. 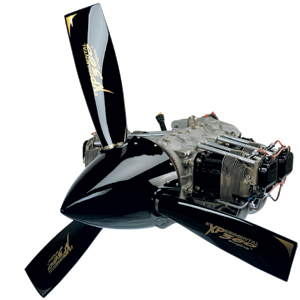 Superior Air Parts, Inc., announced in early summer that it had started shipping its Experimental XP Series engines to authorized dealers. "The resumption of engine shipments may not seem like news, but it is a very big step for our efforts to get our business back to where it was four years ago," said Tim Archer, president and CEO. "From a business perspective, the big picture is that we now have all of the various components and piece parts in stock to not only assemble a complete engine, but also to be able to support the needs of homebuilders and engine shops," he added.

Superior announced that it had begun shipping quantities of its Millennium cylinders in late February. The majority of the parts, including the Millennium cylinders used to build the Experimental XP-Series engines (XP-320 and XP-360), are manufactured under Superior’s Parts Manufacturing Authority (PMA) guidelines, so they are 100% FAA approved, Archer said. They are the same parts and components used in Superior’s FAA certified 180-horsepower Vantage engine.

The engines are approved to run on any 91 octane unleaded automotive gasoline that does not contain alcohol. "Whether it’s the flexibility of fuel types or the ability to literally custom build their engines from a list of both Experimental and FAA-approved components, what Superior’s XP Series of engines give homebuilders is the choice to create the engine they want," Archer said. "That’s a big advantage in today’s world."