Being well out of trim myself at the time, staying busy whirling the little knobbed wheel in the Cessna 150 trainer never appeared overly important at the time. A dumb kid student, elevator trim seemed sufficiently valuable going in and out of slow flight, but the waxing and waning of elevator forces around the pattern were just something to muscle my way around. Cruise? Set and forget it worked fine.

Of course, later I moved to slightly larger aircraft and trim took on a bit of authority. Trying to hold a 172’s nose up on the base leg of a power-off approach when trimmed for cruise flight was like weight lifting, and the first time I considered Teamster membership at the yoke of a 182, I began to believe elevator trim—and maybe all that bother with weight and balance numbers—might have some validity to those poor souls saddled with herding such beasts by the cumulus.

There were also disquieting references in the war annals about young studs changing elevator trim in combat dives and such. Hmm, sounded busy.

But there’s nothing like a near disaster to impress the young. My first visceral experience with the power of the trim genie came ages ago in a Cessna 180. The owner was one of those characters who makes life worth the bother, an old salt who had sailed banana boats, dodged machetes and pistols in grass-roofed bars around the world and even did a stint on the Glomar Explorer. He had regularly instructed in old Stinsons while on layover in Panama for something to do. Either out of boredom or for the love of it are the only reasons I can think of why he put me, a purely tricycle gear kid at the time, in the left seat of his 180 and said let’s go flying. It was his idea and the issue of money never came up.

And so we were working the pattern at our short, hilltop strip when about halfway down the takeoff roll I put some back pressure on the yoke and nothing happened. It was if the yoke was welded in place. So I pulled harder with no effect, then put both hands on the wheel as I simultaneously began to realize the situation was rapidly going wrong—the runway ended in a sharp drop off into a heavily furrowed strawberry patch, and that nose-down trim was the issue.

I’ll never know how the trim got so nose down. Perhaps, without looking at it, while taxiing back to take off, I had reached down and given the trim wheel the five or so twirls to take out the nose-up trim put in when gliding toward the previous landing. And that the owner-instructor had perhaps done the same, giving us double nose-down trim.

All I knew at the time was there was no way I could pull the yoke back and the trim was indicating nose down. The owner simultaneously realized the same thing and what transpired was a two-handed—my right and his left—hand-over-hand slap-fest on the trim wheel to reach workable nose-up trim. All the while the 180 was hightailing toward oblivion, and seeing the runway’s final precipice looming in the windshield, the owner abandoned the trim wheel, reached down and grabbed 20 degrees of flaps using the blessedly manual flap handle. No sooner had he done that than I got the trim wheel to the correct position while also heaving mightily on the yoke. Add in distinctly faster-than- normal takeoff speed and the result was we went from glued to the runway to what felt like an instant 3-G launch heavenward. The 180 bounded upward like a watermelon from a catapult, our chins hitting our chests and our mouths passing through our stomachs.

Naturally, my young bride was tagging along in the back seat, and a sheepish glance backwards was rewarded by The Look, that instantly recognizable combination of saucer eyes and vengeance glare I would soon learn meant serious consequences were still to come. But for the moment we were flying nicely, and wasn’t that a fun little adventure?

But it did impress upon me the reality that when out of trim there is no muscling past the issue in anything larger than a flyweight trainer.

Decades later, I had my second evil encounter with the trim genie, this time in my Starduster. It’s worth noting this plane was built with about three times the elevator trim authority you could possibly use, so the vernier control cable (ungraduated, natch) has 3.5 inches of travel but needs only one turn of the vernier to handle anything from front to rear of the W&B envelope. A typical adjustment is 1/16 turn.

This time I had just taken off in the Starduster with my brother along in the front cockpit. Leveling at pattern altitude the elevator trim was slightly nose high, so I gave the powerful vernier control a little tickle down. Nothing changed. So I gave the control another quick nose-down input. And still no change, so I gave the knob a big turn. No change.

“Hmm, this is odd. I’ll try a bit more to see if I can get something to happen.” And so I did when without warning all the nose-down trim I had commanded arrived in an instant. The cowling zoomed below the horizon as we ballooned into our shoulder straps and I pulled hard on the stick. But it wasn’t enough and in a snap I had both hands on the stick pulling with everything I had. The effort was extreme, as if on the roof of a house holding a rope attached to a piano dangling over the edge. Within seconds I realized that even though we were on the downwind, there was no way I could hold that much force for as long as it would take to reach the runway. And if I let go with one hand to retard the throttle or make any other change, we’d be starting an outside loop. I became mildly concerned.

What could I do…when I realized my brother could help and the PTT switch was on the stick grip. I keyed the mic and got my brother on the job, whereupon I could take one hand to re-trim the elevator, which responded perfectly normally. I relieved my brother and made a normal landing. A quick investigation showed nothing obviously broken, but further investigation showed the trim cable was laying unrestrained in the belly of the aft fuselage. The cable had, just that one time, formed an S-curve instead of moving the servo tabs, then sprung into action when it eventually straightened itself out. A few Adel clamps to firmly retain the cable’s outer sheath solved the issue.

Interestingly, both episodes were with manual trim systems. I don’t even want to consider a runaway electric trim. In a small plane could I get the circuit breaker pulled in time? Could I hold onto a far out-of-trim airplane after pulling the circuit breaker? I don’t know, although when the test comes you’ll be surprised at what you can do, up to a point.

But better yet I endeavor to keep the trim genie happily inside his magic lamp with my now more experienced eye during inspections, along with considering just how much trim authority gets built into a plane. 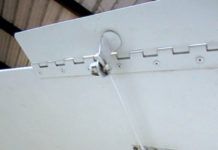 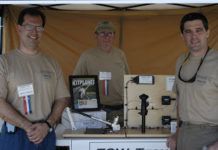 Making a Business out of a Metal Rod

Ken Scott - November 17, 2017
0
Harmon Lange has made more landing gear legs than anybody.