MGL Avionics has announced availability of its new V6 Com radio. The V6 is a small 2.25-inch com radio (it fits in a round instrument panel hole) for the Experimental and LSA market. It features 6-watt transmit power at low power consumption, full stereo VOGAD intercom for up to a four-place aircraft, Pilot Isolate modes, and for the first time on an MGL com radio, standard rotary knobs for frequency and volume selection that allow tuning in big steps when the knob is turned quickly or in 25-kHz steps when turned slowly. 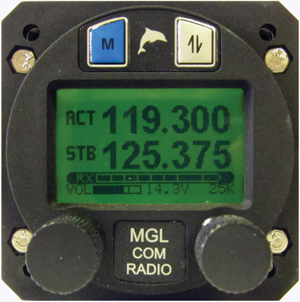 The V6 will operate on both 12- and 24-volt systems. And like its older sibling, the V10 Com, the V6 can be remote controlled via an EFIS for frequency selection.

• Stereo intercom for stereo music listening when a music player is connected to the aux audio input. Music mutes automatically on receive/transmit. Two mono inputs are for EFIS alarm anunciators and phone connection.

• Digital interface with which you can set the frequency on the radio from any MGL EFIS or any equipment capable of setting frequency on an SL40 radio.

• 100 channels with alpha-numeric frequency name and function (when the radio is operated in channel mode).

Grand Rapids Technologies recently introduced its 10.4-inch HXr EFIS, which is designed to allow the use of an Android phone or tablet that can function as a second display. A moving map is standard and includes nearest weather frequencies, range and bearing to a fix, etc. The 10.4-inch screen brings a 60% wider field of view compared to previous EFIS screens, allowing for greater awareness of terrain, runways and nearby traffic.

Other features include dedicated serial channels for AHRS (attitude/heading reference system) communication along with triple serial outputs from AHRS, synthetic approach that couples to the autopilot standard on all models, flight director that combines lateral and vertical steering, demo recording to capture incoming data, XM weather radar, ADS-B weather and traffic, TIS traffic datalink, Strike Finder interface, five or eight serial ports (depending on the model) and one or two USB ports (depending on the model).

There is no charge for standard Android interface and app. The Android phone or tablet must be purchased separately.

Patrick Thomson - May 14, 2010
0
This month well go through the step-by-step vacuum-bagging process for an aileron trimtab part to see how to deal with extreme contours.