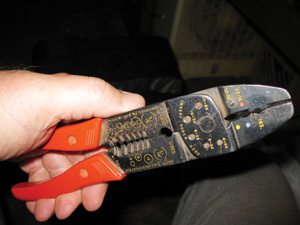 By the authors thinking, this is the best crimp tool on the market. Sure looks like it has some miles on it.

So here we go. In my opinion, a barrier-strip style construction on your aircraft will do more for neatness, safety and troubleshooting than any single thing you can do. Heres the deal. A barrier strip is nothing more than a strip of plastic (Bakelite, actually, for heat resistance) with some metal threaded tabs and screws to go into the tabs. You can connect to the screws/tabs with bare stripped, tinned, stranded wire, but far better are standard crimp terminals. In my airplane every plain electrical wire goes from the device through a barrier strip to where it gets power or signal. I don’t use barrier strips for coaxial cable, but I do use it for shielded wire (as in magneto leads and microphone wiring). 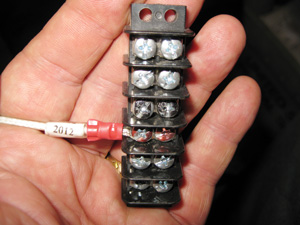 The 2012 wire and crimp connected to the barrier strip screw. For illustration purposes, the two red screw heads are connected together. This allows another wire to go from the other red screw to the power supply or light switch.

Now, Im not one to tell you what aircraft quality means, but there isn’t a lot of difference between the barrier strips you get from the old standbys (Mouser or DigiKey) and those you get from the Radio Shacks that still have parts. You will find that a crimp terminal with a #6 stud hole will fit most of the common barrier strips. Just as a starting point, the Cinch 140 series comes in all sizes from 2 to 12 terminal pairs per strip at a 15-amp rating, or you can use the Cinch 141 series if you need 20 amps. There are terminal blocks that can handle up to 50 amps, but at that level I generally want point-to-point wiring anyway.

Oh, and the crimp terminals? Sure, you can get them from dozens of places including the aviation parts catalog from Harbor Freight, but not many folks will tell you where to get that inexpensive crimp tool. Ive been crimping aircraft terminals for nearly 40 years with the same tool, a Waldom W-HT-1921, and I have yet to have one fail. They are about $15 in the aviation department of Kragen, Auto Zone, Lowes, Home Depot and about a bazillion other tool stores. The tool strips wire, crimps terminals, cuts wire, cuts screws to length and in general is about the handiest tool in the electrical toolbox.

Wire too small for a regular crimp terminal? I like to use #24 wire when you aren’t carrying much more than a few hundred milliamps, but the smallest crimp terminal you can get is for #22 wire. The solution is simple: Just strip the #24 wire double the normal length and then wind it back over the outer insulation. Crunch. 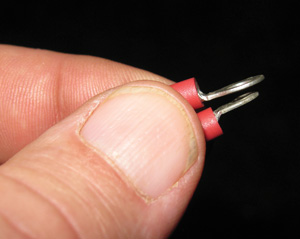 This is how to connect two crimp terminals to the same barrier strip screw.

Hint: You want to run two wires to the same screw terminal on the barrier strip? Connect them back-to-back so that the metal tabs on the crimp terminals have no air gap between them. In that case, the screw that goes into the barrier strip will have more than enough length to hold them.

Find a CAD Program and Use It

But which wire is which? Ah, the famous wire marking question. Before I give you the secret of cheap wire marking, Ill share a little trick that will make your life much easier. Most of us have computers with which we are moderately conversant. And there are free mechanical drafting programs out there (Appersons CadStd [Computer-Aided Drafting Standard], among others) that will let you make schematic drawings that rival anything Beech or Boeing ever put out. Do yourself a favor, get the aforementioned CAD program, learn how to use it, and then don’t wire up the whole airplane and then try to figure out which wire went where.

Every day that you put a wire in, print out the schematic for that section of the airplane and hand-enter each wire that you connect and to which pin of the barrier strip it went. Then go into the workroom and update the schematic on the computer later that day. You will bless me a thousand times over by the time you are done wiring your airplane and then have to troubleshoot it.

How do you mark the wires so you know which end went where by simply looking at it? The big boys have a hot stamp machine, and each wire gets its wire number hot-stamped onto it every 4 feet or so. At this level Im not so fussy that I want that level of marking, but I certainly want each end marked.

The first problem is one of a system whereby the wires get their numbers. This can be as incredibly simple as you wish or as incredibly difficult as you can imagine. I sort of figured that I should set up a system where I could have up to a thousand different wires in the airplane, and it was expandable so that 300 of them were reserved for future use. (How many of you Thorp T-18 builders assigned numbers for your GPS wiring back in the 1970s?) See the Wire Numbers Area Assignment chart as an example. (Also, for more on Karmic Connectors, see KITPLANES November 1997.)

For example, the 12th wire in the lighting schematic will have wire number 2012. How do I get these wire numbers onto the wire? Quite simply, use a self-adhesive label similar to the Avery 5267, and computer-type the number directly onto the top of the label as shown in the photo. Then roll the label around the wire until the numbers show, and shrink CLEAR plastic shrink-sleeving over the label. If you are absolutely sure that no water will ever come close to the wire, you can use an inkjet (water-based ink) printer for the job.

I (belt-and-suspenders Jim) use a laser printer that fuses plastic onto the paper for a truly run-resistant marker. If you are using all-white wire, then you can use clear Mylar labels for even more waterproof construction, but if you plan on using any colors at all, stick with the white paper label. Use a serif type font (one with the little danglies off the top and bottom). If you use a sans-serif font like the one used in this column text, you cannot tell an upside down 6 from a 9, or an upside down 8. Wire 6896 is also 9689 upside down.

One of the nice things about using a computer word processor for the typing is that most of them have a routine that lets you do two labels (one for each end of the wire) and then a whole sheet of labels the same way, adding one number onto the previous number so that you have a whole sheet of consecutively numbered labels, two labels to a number. However, you might want to consult with the Computer Guru of your group about how to do this. While it is really quite simple once you know the trick, then again, so is overhauling a carburetor for someone who knows how to do it. 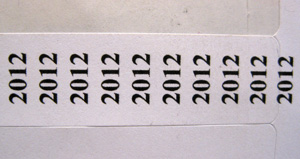 The labels printed out. Watch the alignment, and use a serif-type font.

What remains for next month? A simple way to make one of those $300 Central Power Junction Box units that you see advertised with all the fancy connectors and such for less than $20. Stay tuned.