Recreational Power Engineering (RPE) in Ohio distributes powerful, precision-built two-stroke engines built by Hirth in Germany to the North American market. For 2020 Hirth has discontinued some larger engines—namely the 3502, 3702 and 3703—to concentrate on its best-selling small and midrange displacements. Otherwise, there are no model or technical changes to the Hirth lineup. And while international currency fluctuations require checking with RPE for the latest pricing, there are no price increases.

Hirth engines are typically offered with or without a gearbox (with many gear ratios to choose from) and could have other important ordering options such as adding a centrifugal clutch to the drive, an electric starter, oil injection or electronic fuel injection.

For this guide, we’re displaying the base engine for each model in our charts. Furthermore, there can be tuning differences within an engine model line, meaning power and torque peaks can be selected between high and low options depending on if maximum peak power or maximum cruise fuel efficiency is more valued. Lower power Hirth engines are air-cooled; larger engines are water-cooled.

Because Hirth engines are manufactured in limited, noncontinuous runs, there can be a four- to six-week lead time when ordering, so planning ahead is a must. Warranty terms from RPE are good and include prepaid shipping when returning an engine for service.

The short version of the contemporary Rotax two-stroke story is the 65 hp 582 UL remains in production and is used in several LSAs. That means complete 582 engines, parts and service are readily available. Once past the 582, however, the extensive legacy of Rotax’s two-stroke engine line is fading into history. The 503 is the Rotax two-stroke most recently out of production, but there’s still some support. Lockwood has 503 short blocks in stock—at least for now.

The 582 is available in direct-drive form or with one of two gearboxes. The B gearbox (“drive” in Rotax speak) is suitable for smaller diameter, lighter three-blade propellers, while the E gearbox is larger and includes an electric starter at its bottom. The other 582 engines place the starter at the rear, or the other end, of the engine. The E box can handle roughly twice the inertial mass at the propeller as the B drive. For 2021, Rotax has not made any technical changes to the 582 line. 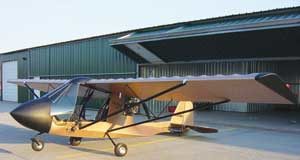