Unlike production aircraft, homebuilts and their builders are not legally required to meet any specific standards. Aside from a single inspection that concentrates primarily on workmanship, we are free to design and build to any standard we chose.

There’s a large body of knowledge of good engineering practice for aircraft. Most of this knowledge was gained the hard way, and it should not be ignored lightly. While we are not held by law to any standard, the laws of physics are implacable. We alone are responsible for the integrity of the airplanes we produce. We have an obligation to ourselves and anyone who flies in our airplanes to see to it that they are designed safely. Happily, in the vast majority of cases, this is true. Most homebuilt designs are reasonably safe. Unfortunately, there are exceptions.

Sometimes, the rules of good practice are violated inadvertently, or through ignorance. Other times they are violated deliberately for what seem, at the time, to be good reasons. Whatever the reason, departure from good design practice can have catastrophic consequences.

Bad engineering kills. While I cannot begin to discuss all possible bad practices in this article, I will touch on some of the more dangerous and common errors I have observed in the homebuilt world.

One tempting trap is the desire to cut costs. In homebuilding, we often use materials and fasteners which are not officially designated aircraft quality. Often this is acceptable, but the designer must take extra care to ensure that the non-aircraft-quality component will be strong enough to take the loads imposed on it and reliable enough to bet a life on. Factors of safety should be increased over those used for aircraft-quality components to compensate for the increased variability of components which are not manufactured to aircraft standard, particularly if these are in a safety-critical area.

There are some things which should never be parts of airplanes. Anything which has unknown strength and great variability in quality from one part to the next is dangerous. Using such parts in a safety-critical area of an airplane design invites disaster.

The desire to save money can also lead to the builder failing to incorporate available safety equipment. A case in point: One lightweight airplane which crashed at Oshkosh some years ago had a structural failure at an altitude of about 800 feet, and an airspeed well below 100 miles per hour. Had it been equipped with a BRS or similar parachute system, its occupants would most likely be alive today, with a hair-raising story to tell at hangar-flying sessions. The saving of the cost of the parachute system was no comfort at all to them in the long run. 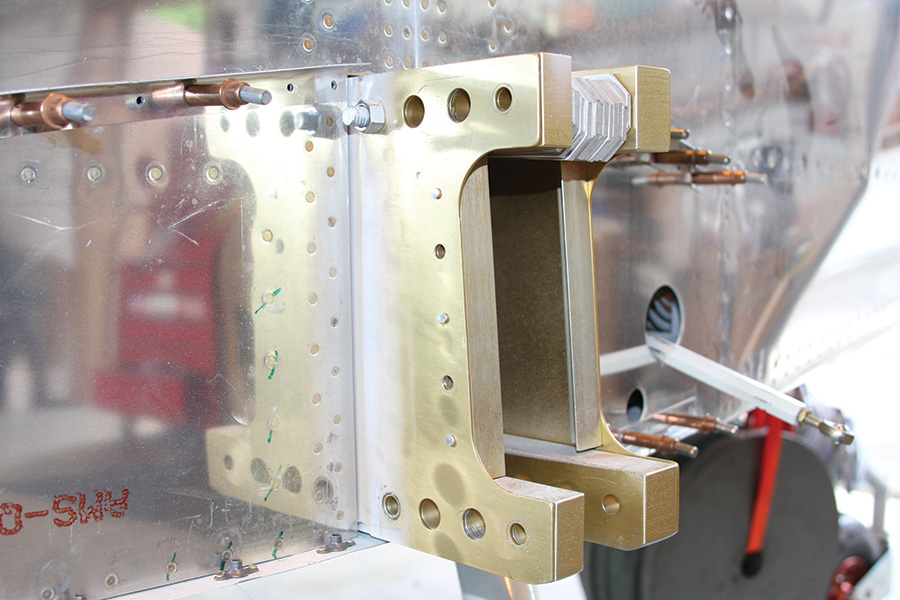 There’s a reason that spars are built like the Brooklyn Bridge; they are single-point failure components. Cutting corners on materials or fasteners could lead to fatal consequences.

Ideally, no single-point failure should lead to an accident. In reality, this is impossible to achieve everywhere. There are components such as the wing spar, which must never fail. Despite this, areas where a single failure can lead to disaster should be eliminated wherever possible. Where a single component is safety critical, great care must be taken in its design to absolutely minimize the chance of a failure. This is why primary structures should always be designed with a large factor of safety. Safety-critical joints and fasteners should be easily inspectable, particularly if they are routinely assembled and disassembled.

Some homebuilts have far too much potential for single-point failures. On one particularly bad example that I saw at Oshkosh, I counted five separate single-point failures which could lead to the loss of the entire horizontal tail. None of these involved failure of the tail spars. They all had to do with how the tail was attached to the airplane. The designer was trying to make the tail easy to remove, so the airplane could be trailered. He succeeded all too well. The tail seemed to me to be far too likely to remove itself at an unfortunate moment.

The desire to make an airplane foldable or quickly dismantled for trailering leads to some potentially hazardous situations. More than one foldable airplane has folded spontaneously at an inopportune moment. Wing and tail folds must be designed so they are easy to assemble correctly, and easy to pre-flight. The pilot must be able to tell by direct inspection that safety-critical pins, bolts or latches are properly set, and will remain so in flight. A wing-fold system with latches that cannot be visually inspected before flight is inherently dangerous and should be avoided. It is also important to make such a joint difficult or impossible to misassemble in a way that looks right, but is not safe.

It is rarely necessary to hang the safety of the airplane on a single fastener. If at all possible, safety-critical joints should have redundant fasteners, and the airplane should remain safely flyable with one fastener missing or broken.

On primary wing and strut-attach fittings, it’s difficult to make the attach bolts redundant, and many airplanes have single-point failure points there. In such a case, the critical bolts should be sized with a high factor of safety, and great care should be taken to make sure they are safetied. The joint should also be designed to minimize the likelihood that the bolt will fall out if it loses its nut.

Control systems are another area where single-point failure points tend to crop up. Airplanes certified under FAR Part 23 must be flyable with any single flight control disabled for this very reason. The airplane must be flyable in pitch with just the trim, and must be controllable laterally with either the rudder or the ailerons alone. This requirement arises from the fact that mechanical control systems have many pivot pins or bolts which cannot be made redundant, and thus are potential single-point failure sites. More than one airplane has been lost due to the loss of a single bolt in the control system. Even though homebuilts are not required to meet FAR Part 23, the standards are a good guideline for safe design.

Certified aircraft-quality fasteners are expensive, and many homebuilt designs use industrial fasteners, particularly rivets, to reduce cost. Doing this involves a certain amount of risk. With proper care, many industrial rivets and bolts can safely be used in airplane structures, at far lower cost than the aircraft-quality hardware they replace. To use them safely, the designer must take extra effort to determine the strength of these fasteners, their tolerance to vibration, and the variability of properties from one fastener to the next . 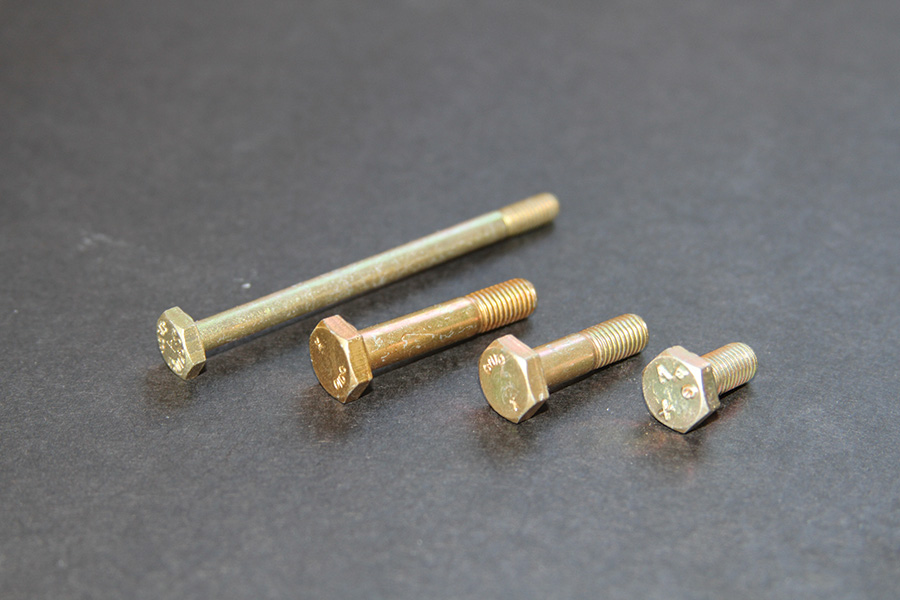 Properly sized AN fasteners often provide critical strength in structures that can’t get by with anything less. No critical applications can use lesser hardware.

It is particularly important to realize that aircraft hardware is held to higher quality-control standards than industrial hardware. A structure using industrial fasteners should be designed to a higher factor of safety (for the fasteners) than one using aircraft-quality hardware. Its design should also take into account that the fasteners are more likely to fail by making the fasteners more redundant. Non-aircraft-quality fasteners should never be used in a safety-critical area where a single fastener failure could lead to loss of the aircraft.

There are some types of hardware which should never be used in safety-critical or load-bearing aircraft applications. One such is the hollow blind rivet, or “pop rivet.” There are several kinds of blind rivets, which tend to all get lumped together as pop rivets. Some are aircraft quality, or at least useable as aircraft fasteners, and some are not.

The critical difference between the different types of blind rivets lies in what happens to the mandrel after the rivet is set. On aircraft-quality blind rivets such as the Cherrymax, there is a locking collar inside the rivet body which holds the mandrel permanently in place. Such a rivet is essentially equivalent to a solid rivet and is safe to use.

Some industrial blind rivets also have a positive mandrel-retention feature, and these are the types which are commonly found on all-metal homebuilts. They are usually used in areas where a component is held in place by many rivets, so that the failure of a single rivet is not immediately threatening to the integrity of the airplane.

Some blind rivets do not have positive mandrel retention. On these, the mandrel is held in by nothing more than friction with the inside of the rivet body. This is the case for almost all hardware-store rivets. The danger with these rivets is that the mandrels often fall out after the rivet has been in place for some time. This is particularly true if the rivet is used in a high-vibration environment, such as the structure of a metal airplane.

With the mandrel gone, all that is left of the rivet is a thin-walled tube. This has very little crush strength, and will shear, deform, or pull out under relatively low loads. Such rivets are fundamentally unreliable and should never be a part of any flight-critical structure or component. Unfortunately, it appears that not all designers understand this. I have recently seen a light homebuilt with hollow “dime-store” rivets holding the end fitting into the main wing lift strut at both ends. On the same airplane, the same type of rivets were used to attach a tang to the aft fuselage. The tail brace wires were attached to this tang. Use of hollow blind rivets without positive mandrel retention in these safety-critical situations is inherently dangerous, and should be avoided.

There are a few types of industrial blind rivets that are in common use in the homebuilt world. They are used on several popular and successful kit airplanes. A designer seeking to save cost by using industrial rivets rather than certified aircraft-quality rivets would be wise to learn from the experience gained by these successes, and use the same types of rivets. 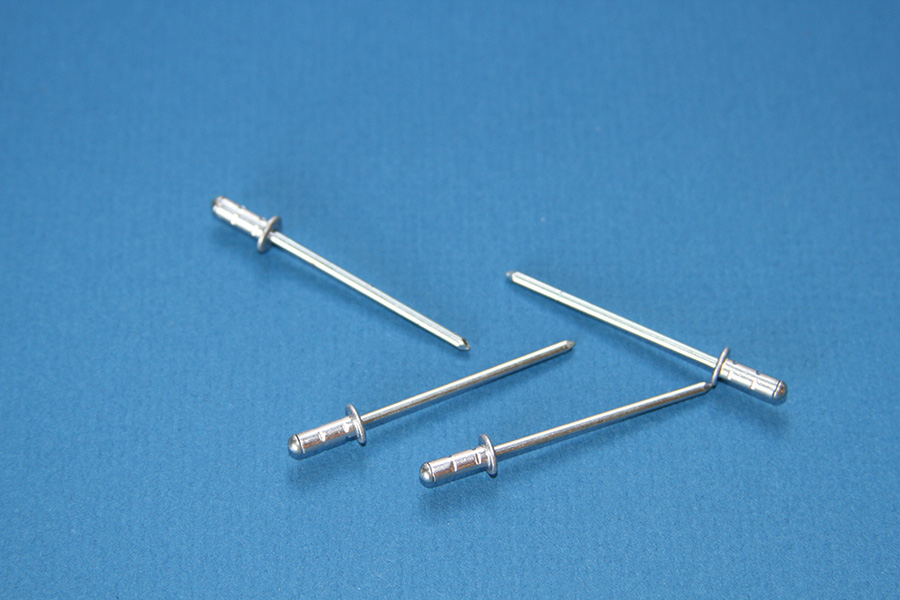 There’s nothing wrong with blind or pop rivets, as long as they’re used in the right application where loads aren’t too high.

A second problem which sometimes arises is the substitution of one type of fastener for another. This is sometimes done out of ignorance, sometimes to save money, and sometimes simply because the builder has run out of one type of fastener and wants to continue working. Replacing a fastener with a weaker substitute can have disastrous consequences. Some years ago, a T-18 shed a wing in the Oshkosh fly-by pattern. The primary cause of this accident was that the builder had substituted soft aluminum rivets for the high-shear rivets called for in the plans. This substitution was made in the joint which held the main wing-attach fittings to the spar. Predictably, these weaker rivets eventually failed. The designer of the airplane had chosen the fasteners that hold it together for good engineering reasons. Not all bolts and rivets are created equal. Substituting one type for another runs a serious risk of weakening the structure.

Home building airplanes is inherently experimental, particularly for those of us who build original designs. Despite this, it is neither necessary nor desirable to experiment in safety-critical areas where well-known, safe practice has already been defined. The time spent ensuring that an airplane is properly engineered is important, and may well save a life.