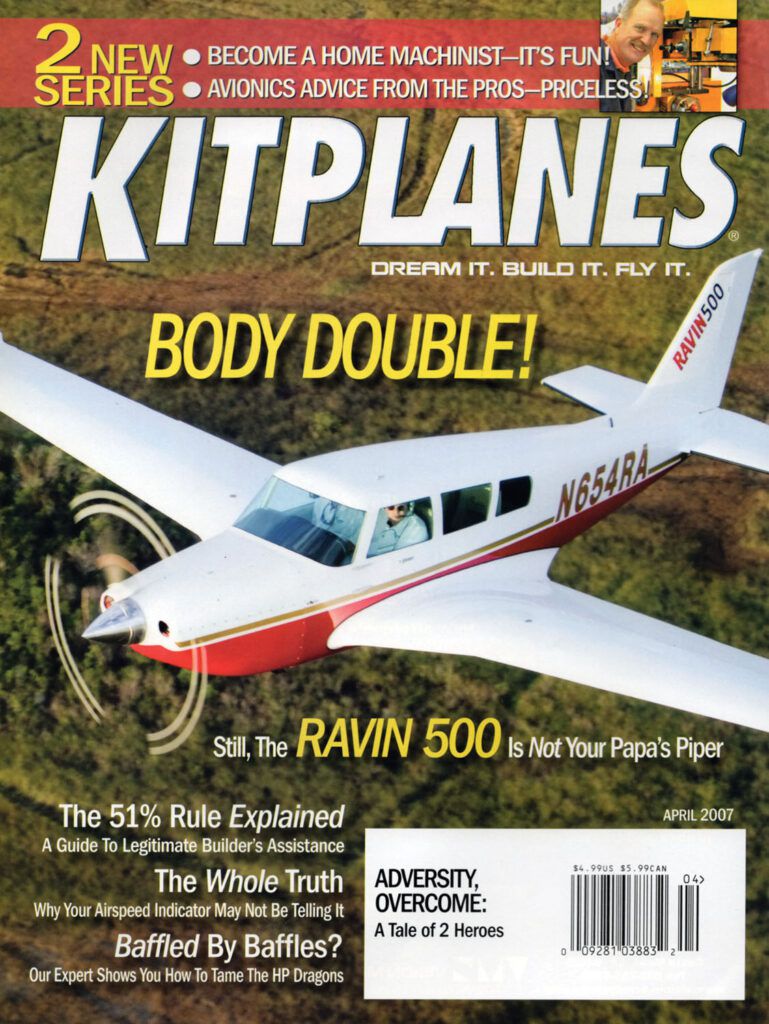 Faithful KITPLANES® readers who picked up our April 2007 issue might be forgiven for thinking we’d lost our minds and put a Piper Comanche on the cover. No, it was the Ravin 500. Think of the Ravin as a composite Comanche, though one with a lot of changes and improvements from Piper’s original. The cabin door moved to the left side (passengers in first, pilot last), the wing was tweaked and systems across the airplane were simplified. The kit itself was more than $90,000 in 2007, with an estimated completed price near a quarter million. Ravin claimed cruise speeds near 200 knots on a 260-hp Lycoming IO-540. “Straight-and-level flight…delivered a degree of stability that the serious pilot loves to find—stability that makes work easy for an autopilot like the TruTrak,” reported Dave Higdon during a test flight in Florida. He did note that a cruise check at 65% power and 6500 feet msl netted only 187 knots true.

We had a half-page ad for Xerion Avionix’ AuRACLE engine monitor, which used a full-size color LCD to display all the important engine information at once, which was not yet a thing in 2007. Despite plenty of technical promise, the device and the company did not survive the market downturn in 2008–2009. The long-running Vision Microsystems engine monitor went color with the VM 1000C (see the ad, below).

Our April issue featured the beginning of two series, both of which would be long running. Stein Bruch was brought out of his wire-laden, solder-smoke den to talk about avionics from the installation shop’s perspective in “All About Avionics,” while Bob Fritz would begin his “The Home Machinist” series. Both of these ideas continue to this day, with Bob Hadley’s “Home Shop Machinist” and Larry Anglisano’s “Avionics Boot Camp” carrying on the tradition of offering insight and expertise in specific segments.

Bob Fritz was a busy beaver that month, also penning a feature on Bruce Cruikshank’s modifications to his Van’s RV-4. A double amputee, Bruce built a special control system as well as dozens of smaller mods to make it possible to get in and out of the RV-4 and fly it safely. “Life for Bruce is not centered on what he can’t do; it’s focused on what he can accomplish,” Fritz summed up in the feature.

In what was a strongly hands-on issue, Ed Wischmeyer recalled going to one of Bob Nuckolls’ weekend seminars, an opportunity to absorb as much as you can from someone who has rationalized and clarified aircraft electrical systems for decades. (Even today, few homebuilts have electrical systems not in some way touched by Bob’s designs or best practices.) Also in that issue, Ken Scott added to our understanding of airspeeds, specifically that Vne (never exceed) is more correctly a true airspeed than an indicated one, while Chuck Deiterich offered a way to build your own manometer for testing your airspeed indicator before flying. Finally, in Dave Martin’s Light Stuff column, he detailed how the new LSA rules permitted course-based Repairman certificates for owners that gave them some of the benefits of building on their own when it came to maintenance. Wouldn’t that be nice for all homebuilts, not just LSAs?

Paul Dye - September 20, 2012
1
Quick and nimble, with distinctive elliptical wings: The Spitfire was a classic WW-II fighter plane. Now a 90%-scale kit, true to the original, makes this inspired design available to the homebuilder.