Last month, I ran out of space before getting to the end of our discussion of landing gear. This month, we conclude the series with a look at the effects of static ground attitude and the fore-and-aft positioning of taildragger main gear.

The designer of an airplane with tricycle landing gear has a lot of freedom to set the static ground attitude. By adjusting the length of the main and nose landing gear legs, the airplane can be set at attitudes ranging from low, to slightly nose-down, to nose-up. This means that the angle of attack of the wing when the airplane is rolling can vary enough so that the wing may have negative (downwards) lift, zero or near-zero lift, or positive lift. There are advantages and disadvantages to all of these options, so the best choice depends on the needs of the specific airplane.

The initial design default for a trike-gear airplane is to place it in a near-level attitude when it is sitting on the gear. For most wing configurations, this will give the airplane slightly positive lift as it rolls on the gear before takeoff, and after touchdown.

It is very rare to set the airplane so nose-down on its gear that it will have negative lift when rolling. The only potential advantage of this is that, after landing, the pilot can de-rotate and plant the airplane firmly on the ground to improve braking. While this may be mildly advantageous on landing, negative lift during the initial part of the takeoff roll is entirely undesirable. The negative lift will increase the rolling resistance of the airplane and generate additional aerodynamic drag, both of which will decrease acceleration and increase the length of the takeoff roll. It will also make it more difficult to rotate the nose up to establish a positive angle of attack for liftoff. Overall aerodynamic downforce may be good for racing cars, but it is undesirable for airplanes.

For takeoff performance, the optimum ground attitude is usually level to very slightly nose-up. As the airplane rolls down the runway, the drag opposing its acceleration is a combination of aerodynamic drag and the rolling resistance of the tires on the runway. The rolling resistance of the wheels is directly proportional to the weight they are carrying. As the airplane accelerates and aerodynamic forces come into play, having the wing generate a modest amount of lift to offload the tires can reduce rolling resistance more than the increase in aerodynamic drag produced by the production of the lift. This can reduce overall resistance and shorten the takeoff roll. The optimum lift coefficient for takeoff roll tends to be relatively small, and it’s always less than the lift coefficient for liftoff.

A near-level attitude on the ground will place the wing near the optimum angle of attack for takeoff roll and will also provide the pilot with reasonably good forward visibility while rolling.

On landing, it’s desirable to be able to reduce the lift of the wing to close to zero to increase the weight on the wheels to maximize braking performance. Once again, a near-level ground attitude provides a good compromise between acceleration on takeoff and braking on landing. If the airplane has flaps, the ability to retract the flaps quickly after touchdown to load up the wheels and increase braking can have a significant favorable effect on minimum landing distance.

If the airplane is sitting at a significant nose-up attitude on its gear, the wing will start to lift significantly as soon as the airplane accelerates down the runway. Although this extra lift will reduce rolling resistance, the induced drag caused by generating this lift will often be higher than the drag saved by unloading the wheels, thus lengthening the takeoff roll. The extra lift might also cause the main gear to lift off prematurely, leading to the airplane “wheelbarrowing”—rolling on the nose gear with the mains in the air. This is highly undesirable since the airplane will be unstable both in pitch and yaw in this situation.

On landing, a gear that holds the airplane nose-high when it is static presents several potential issues. The first is that it is relatively easy to strike the nose gear on the runway before the mains if the pilot does not flare sufficiently. A nose-gear strike can lead to the airplane bouncing back up with a large nose-up pitch rate. This is a very dangerous situation since it is hard for the pilot to arrest the pathing motion without overcompensating and driving the airplane back into the runway to repeat the process. If this happens, the airplane will endure a divergent series of bounces that will not end well. Usually the proper pilot reaction to a nose-gear strike on landing is to go around, or at least hold the nose up, and get the airplane stabilized in the air before letting it settle back down if there is enough runway left to do so.

From the preceding, it looks like a nose-up attitude on the gear is always undesirable. However, there is one situation where having a modest amount of positive angle of attack while rolling on the gear can be the best compromise. Some airplanes (for example 3-row 6-seaters) have a large enough CG range that it is difficult to place the main gear to simultaneously prevent tip-back when the airplane is loaded aft and provide acceptable nosewheel liftoff capability for takeoff rotation when the airplane is loaded forward.

In this situation, the best compromise is to place the mains as far forward as possible without getting into tip-back issues at aft CG, and then give the airplane a few degrees of static nose-up attitude on the gear. With this setup, as the airplane accelerates for takeoff at forward CG, the lift generated by the wing will unload the main gear and decrease the nose-down moment produced by the main gear reaction load. This reduces the elevator power needed to lift the nose gear and rotate for takeoff. For airplanes like this, the proper gear attitude is a compromise between the need to improve takeoff rotation and the other disadvantages just discussed.

A few airplanes have been built with a static angle on the ground that is high enough so that they take off without rotating. In general, this arrangement does not work out well since it causes significant piloting and control difficulties on both takeoff and landing.

Unlike a trike, a taildragger sits at a high nose-up angle on the ground. The drag of the airplane in the 3-point attitude is relatively high. During takeoff, the pilot pushes forward on the stick to raise the tail as soon as possible, setting the airplane in a low-drag, nearly horizontal attitude while it accelerates to liftoff speed.

The 3-point ground attitude of a taildragger is set by the desire to be able to touch down with the wing at or near maximum lift to minimize touchdown speed. Ideally, the airplane touches down flying as slowly as it can without stalling. Accordingly, the ideal 3-point attitude for a taildragger is just below the stall angle of attack of the wing. In spite of the common term “full-stall” landing, that’s not really what happens since stalling the airplane before touchdown will lead to loss of control, and it is desirable to have a little margin for safety. It’s probably more accurate to call it a “near-stall” landing.

It is also undesirable to have the airplane so nose-up that the wing is stalled during the beginning of the takeoff roll before the pilot can raise the tail. If the wing were to be stalled in the three-point attitude, its drag would be very high, hurting takeoff performance.

The fore-and-aft position of the main wheels is affected by several factors. Moving the main gear forward helps protect the propeller on bumpy fields and also allows the pilot to brake more aggressively without nosing over.

Unfortunately, the farther forward the main gear is, the more directionally unstable the airplane is when it is rolling. Accordingly, a taildragger with more forward main gear will also have more of a tendency to ground loop. A far-forward main gear will also tend to bounce the nose up on touchdown and make the airplane more difficult to wheel land. The proper location for the gear is a compromise between the factors.

Sometimes, after an airplane has been in service for a while, operators conclude that the designer got it a little bit wrong. A good example of this is the Cessna 120/140. Apparently, Cessna designers opted to move the main gear as far back as possible to try to give the airplane the best directional characteristics they could. Unfortunately, this also meant that the airplane was relatively prone to nose-overs under braking. A significant number of these airplanes have been modified by installing an STC kit that moves the main axles about 4 inches forward from their factory position.

That’s all for landing gear. Next month we’ll take a closer look at design considerations for the wing. 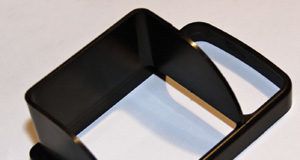