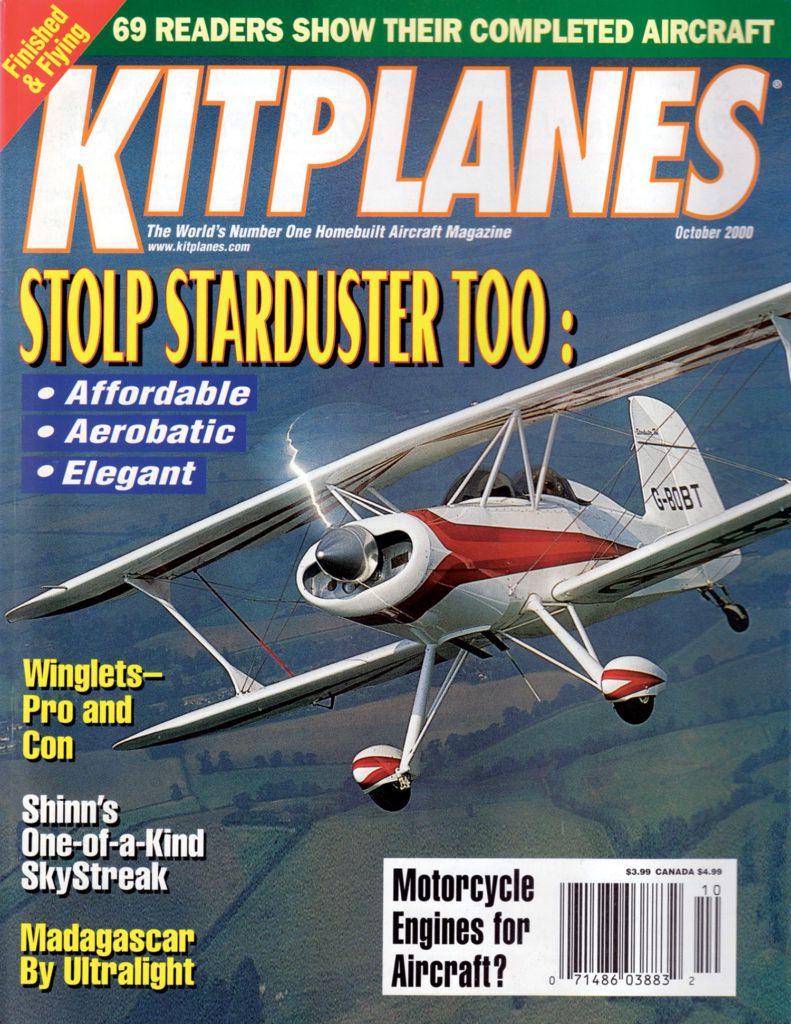 Our October 2000 issue featured the Stolp Starduster Too, a huge section on readers who had completed their airplanes and a closer look at motorcycle engines for aircraft. Writer Bob Grimstead opined that “there is nothing quite like a ride in an open-cockpit biplane to put you back on top of the world. In a machine like the Starduster, you can really be at one with the air.” He noted that the “current British owners” of the design wanted a biplane with reasonable performance at a reasonable price. The owners discovered, in their research “for the perfect two-seat aerobatic biplane: Good-condition Pitts S2s are pricey, Christen Eagles and Steen Skybolts are heavy, and most other types are old.” Grimstead came away impressed.

Inside the magazine, we devoted 17 pages to reader completions, showing a wide range of aircraft, from a Micro Mong to a whole slew of RotorWay helicopters. John Larson recalled, in print, correspondence with reader John Paul Adams, who was curious to know why more motorcycle engines weren’t used in aircraft, pointing out that the then-new Suzuki Hayabusa’s 1300cc inline-four could push an aerodynamically dirty motorcycle to 186 mph. (In fact, it could go faster but there was a voluntary agreement to limit bikes to 300 km/h, or 186 mph, at the time.) Larson correctly suggested that most motorcycle engines were designed as small-displacement types with an emphasis on high-rpm power and low weight, which are often contra-indicated with a propeller. He did, however, note that some of the larger twin-cylinder engines, like BMW’s older “air head” flat twins, might offer a useful option. Nevertheless, history shows bike engines as one-off outliers, and you can probably thank the Rotax 912, designed for aircraft, for part of that.

Howard Levy reported on Beveridge Shinn’s one-off SkyStreak homebuilt. A conventional design with unconventional touches, including a massive dorsal fin/vertical stabilizer and horizontal stabilizer with pronounced dihedral, though not quite enough to call it a V-twin. The wood-and-fiberglass two-seat design featured retractable gear. It used a rare engine for the time, one of Continental’s lightweight, six-cylinder Tiara engines. Rated at 200 hp, the 400-cubic-inch engine was supposed to be the beginning of all-new technologies for Continental, but teething problems and OEM indifference led to its cancellation.

Mary Bernard, who would go on to become this magazine’s editor in chief much later, reported on CompAir’s extensive builder-assistance program while Lancair’s back-cover ad teased that if you bought one of their kits, all that was left was to “Just Add Paint.” “Not quite. But what you start with will get you so close to flying the plane of your dreams, you can feel it,” they said.